When my review of the Astell&Kern Futura SE100 appeared on The Absolute Sound website, the first comment posted was, “Yet another DAP from A&K? Whoopee.” Snide, but I get it. Astell&Kern portable players have never been exactly pocket-book-friendly. But with its Activo line, Astell&Kern looks to change that.

The Activo CT10 ($299) has impressive specifications. It’s based around a quad-core CPU, and was designed jointly by Groovers Japan and iRIVER. It also debuts Astell&Kern’s Teraton TM200 module, which combines a Cirrus Logic CS4398 DAC, analog amplifier, independent power unit, and clock on a single chip. It uses a 2500mAh 3.7V li-polymer battery for a power source.

The CT10 has full DLNA networking, as well as Bluetooth connectivity, including aptX HD support for streaming up to 24-bit/48kHz high-resolution audio over 4.1 Bluetooth. The CT10 can also be used as a portable amplifier/DAC via its USB connection. The Activo CT10 includes 16GB of internal memory along with a microSD card slot that supports up to a 512GB microSD card. The CT10 can play back high-resolution audio up to 24-bit/192kHz PCM and quad-rate DSD, which the CT10 converts to PCM. It is also MQA compatible. Tidal and Groovers+ streaming services apps are built in, and you can add other services including Qobuz through the OpenAPP site. For those who like to custom-tailor their sound, the CT10 has ten-band adjustable EQ built-in, with eight pre-set filters. Is there anything the CT10 doesn’t have? With only one single-ended headphone output, the CT10 won’t power tough-to-drive headphones quite as well as Astell&Kern’s buff and beefy Kann or suave and sexy SE100.

The CT10’s form factor is a departure for Astell&Kern. Its round-cornered rectangular shape is nothing special, which is unusual for A&K, which is known for its unorthodox player body shapes. Instead the CT10 has a curved-corner, one-piece design with its “cool white” back panel wrapping around to meet the touchscreen’s front panel. I would love to see that white back panel morph into dark gray or royal blue, so the overall appearance would be less generic “white goods.” 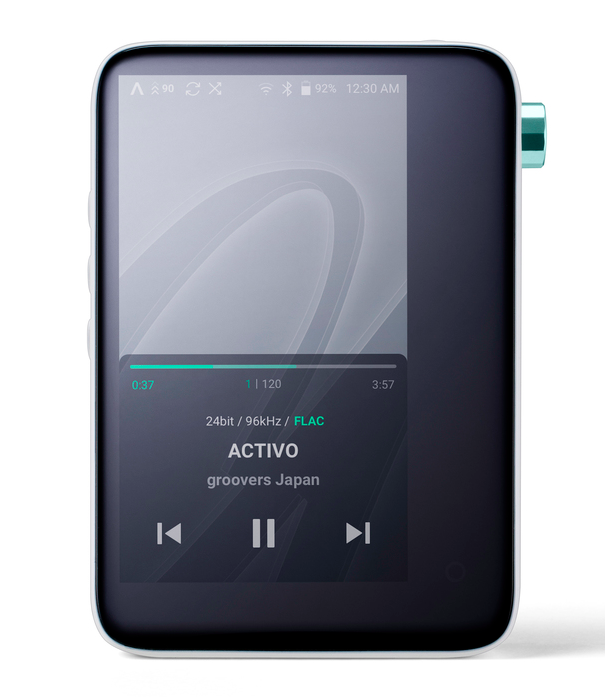 Even though the CT10 only has a single-ended headphone output, it was able to successfully drive a pair of Beyerdynamic DT-990 600-ohm headphones to adequate volume levels even with my own live concert recordings (although they did require its full output level to accomplish this). While playing, the back of the CT10 could get quite warm, bordering on hot, especially when it was working at decoding and playing DSD recordings. The CT10 comes with a soft bag, but no travel case or armband, which would make the CT10 ready for gym use. For $29 you can get a nicely designed leather case from Amazon, however.

Sonically I found the CT10 was more than up to the task of delivering high-resolution music without any negative sonic issues. Your choice of earphones and EQ settings will have a far greater sonic influence on the final sound than the player itself. I also used the CT10 with several Bluetooth headphones. The inclusion of aptX HD made for a wireless headphone experience that was on par with what I heard from comparable wired headphones.

The only glitch I experienced during playback was on DSD DFF 5.6 files played from a 128GB card. Every 30 seconds or so an extremely short dropout occurred. IRIVER could not duplicate the bug when I sent them the file, but it occurred on two different CT10 players, so I suspect it was something to do with the card, since these same tracks played correctly when the card was loaded into a A&K A&futura SE100. Overall the operational efficacy of the CT10 was on par with Astell&Kerns’ other players. Its touchscreen responded with alacrity, and its menu options were well laid out.

I suspect the Activo CT10 will be a big hit. It delivers much of Astell&Kern’s ergonomic mojo in a small value-packed player. For those music fans who don’t travel with difficult-to-drive headphones, the Activo CT10 could be a near-perfect travel and workout companion.