As any hi-fi enthusiast knows, there’s no shortage of attractive loudspeakers out there nowadays. But beauty only goes so far if the sound isn’t up to snuff. Happily the KEF R11, the flagship of the venerable British marque’s mid-tier R series, delivers smart technology for great sound in a pretty package—and for less dough that you might expect.

Positioned above the entry Q series and below the Reference series, the R series was first launched in 2011 but is now in its fresh 2018 iteration. For the latest models, a new motor system, cone, and surround have been added to the midrange driver in KEF’s signature Uni-Q coaxial array. In addition, a new proprietary technology has been developed to control acoustics at the tweeter and midrange junction of the coaxial driver. According to a white paper from KEF, these redesigns are intended to deliver cleaner sound with less distortion and coloration.

And based on the time they’ve spent in my listening room, I’d have to say that the R11s achieve these goals to a large extent. 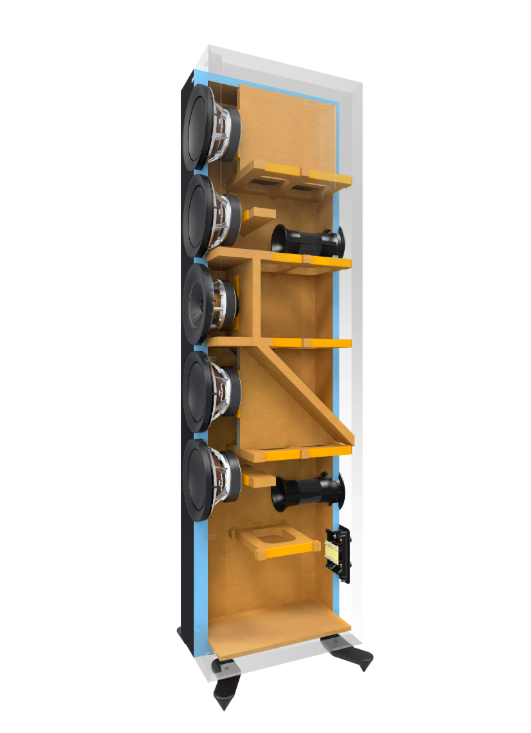 A three-way, bass-reflex floorstander, the $5k-per-pair R11 contains the same size Uni-Q concentric array (5″ midrange with 1″ vented aluminum dome tweeter) found in the Reference and Blade speakers; it also has a Tangerine waveguide to improve high-frequency dispersion. This latest version of the Uni-Q coaxial array is surrounded by a “shadow flare” trim ring, which extends the waveguide effect. According to KEF, “the tweeter no longer has line of sight of the cabinet edges, creating a ‘shadow region’ at the points where the potential for diffraction is highest, minimizing the acoustic impact [of the enclosure] to negligible levels,” and helping to prevent the “scattering” of soundwaves that diffract on the baffle’s edge for clearer, more accurate sound.

Now in its twelfth version, the unique Uni-Q point-source has long been the gem in KEF’s crown—or in this case, its literal centerpiece: In this D’Appolito configuration it’s nestled between four 6.5″ aluminum (hybrid with paper) woofers, two above the Uni-Q and two below. The Uni-Q driver array is identified by name in small grey letters on the front panel. The speaker also bears the KEF logo at the top of the MDF cabinet’s front—in silvery-grey lettering on my white review samples. Sleek and modern in style, the R11 is available in three finish options: white or black gloss with tone-on-tone diaphragms, or walnut wood veneer with rose-gold-colored diaphragms.

Returning to not-so-desirable types of coloration—the sonic kind—another way in which KEF has reduced cabinet resonances is through reworking the enclosure’s internal bracing layout, structure, and damping system, rendering the box more inert and thereby helping to minimize coloration for a purer, more neutral presentation. KEF makes its own enclosures as well as drivers, which allows for greater design flexibility, innovation, and ultimately more options for customers.

Before I talk about these R11s, what I’ve noticed and come to associate with KEFs, from the compact LS50 Wireless to the big Blades and flagship Muons (which I’ve auditioned at different shows), is their ability to disperse the sound smoothly and non-aggressively, while also delivering solid lower-octave heft. When reviewing the li’l LS50 Wireless I was delighted by that compact’s broad dispersion and the unexpected amount of bass it managed to produce. Yet with the R11s, coherence and clarity stood out first, although the speakers still delivered wide and smooth dispersion. No doubt the concentric Uni-Q driver reinforces this clear, coherent delivery, and based on my critical listening time, the latest version apparently prioritizes and refines this attribute. However, given the number of woofers I’d anticipated some subtle coloration, more of a “bottom-up” sound, than I actually heard. That’s not to say the R11s shied away from bass; they didn’t. The woofers were quite linear and deep-reaching, and the pair of ports on the rear of the speaker enclosures seem to augment their low-end expressiveness without any huffing or puffing. Nonetheless, the R11s struck me as more neutral to “top-down”-sounding in character than what I’d expected given all those bass drivers, and I’ll admit that certain genres of music might have benefited from a bit more bottom octave slam, though I never really felt the urge to add subs.

Could the R11 (and R series) represent a sonic sea change for KEF? This kind of crystalline clarity came as a surprise. One could argue that the R11’s visual aesthetic now “matches” its sound: clean, precise, seamless. Clearly visual style matters here—and for the KEF marque generally. Its LS50 Wireless, for instance, comes in a wide array of color finishes from vivid to basic, in addition to the Marcel Wanders Nocturne special edition with front-panel design elements that glow in the dark.

I found setup for the R11s to be quite easy in my room. This hasn’t necessarily been the case with a number of speakers I’ve recently reviewed and enjoyed. The “one-size-fits-all” user manual for the R series reminded me a bit of Ikea instructions with more line drawings and less text—though the text that’s there is multilingual, of course. Best of all, the manual contains helpful setup diagrams for various-use cases, including home-theater/multichannel. After some maneuvering I settled on placing the R11s about eight feet apart, about four-and-a-half to five feet from the rear wall, and toeing them in about three inches or so. My listening seats were about nine feet from the speakers. Interestingly (and unexpectedly) I didn’t actually prefer the sound with the plinths and spikes that came with the speakers attached…so I removed them and just placed the cabinets on the hardwood floor a few inches in front of a heavy wool area rug. The R11s may be bi-wired, but instead of jumpers between the binding posts there’s a pair of knobs, which are turned in one direction or the other for bi-wiring or single wiring. Bi-wiring seemed to give the R11s a boost—to goose things up a bit—but even when they were connected with single wires, the speakers never seemed “thin” in presentation.

The R11s offer quite a lively ease, even without a lot of power in front of them. As I’ll describe, my petite PS Audio Sprout100 integrated amp’s 100Wpc drove them nicely, as did a loaner Hegel H90 integrated that delivers just 60Wpc (but they’re good watts). Interestingly the R11 shares the same basic specs for sensitivity and impedance (as well as pricing) as the latest Monitor Audio Gold 300 speaker (which I’ll be reviewing in an upcoming issue), but the latter has a bigger appetite for power, or at least seems to perform better with more wattage and dynamic headroom.

For simplicity’s and space’s sake, my listening notes below focus more on streaming via Tidal and Qobuz (depending upon which Mac laptop I was using) through the PS Audio Sprout100 and (later) the Hegel H90, in addition to some CD playback on MBL’s Noble line N31 CD player/DAC. I also listened with Clearaudio’s DC Performance Wood turntable, Tracer tonearm, and Stradivari cartridge with a Boulder 508 phonostage, occasionally mixing in MoFi Electronics’ UltraDeck+ ’table, ’arm, and cartridge. (The rest of my system for this review also included cables from Morrow Audio and Ansuz Acoustics, an AudioQuest Niagara 1000 power conditioner, Stein Music H2 Harmonizer boxes, Zanden room treatments, and Critical Mass Systems equipment racks.)

The PS Audio100 has a bass boost option and with the R11s, for the first time, I preferred it “on” on more tracks than I had before—quite a surprise. Especially without it, there was a sort of “shiny” quality to the degree of detail in the sound that most often was pleasing but almost too pristine at times, though it never veered toward too metallic. I’m no card-carrying, died-in-the-hemp Deadhead, but I really dig a couple of the group’s albums, American Beauty for one. The intro and later guitar riffs on “Candyman” on the MoFi CD reissue seemed to skew a touch bright, but then again my ears have some slight treble oversensitivity. Happily, activating the Sprout100’s bass boost helped here (and elsewhere on the album); it seemed to give many instruments a little more body and “dirtied up” the proceedings a bit (in a good way), balancing out some of the moments of crystalline clarity without too much exaggeration of the lower octaves (or elsewhere). The R11’s—and Uni-Q’s—stellar dispersion also may have circumvented any perceptions of upper-end beaminess or brightness. The mandolin parts/images on “Ripple” came through so realistically in detail and beautifully in true-to-life timbre that I played the track twice, just to delight in it again. The presentation was forward-ish yet pretty true to scale. I detected a few instances of vocal sibilance, but nothing offensive. Before it was paired with the KEF R11s, I’d seldom heard quite that much detail with that little $599 integrated in place. Impressive.

The Hegel H90, which retails for $2000, brought greater immediacy and drive to transient attacks, particularly on percussion. Resolution also increased, though once in a while some tracks could feel almost too even-handed and “cleaned up.” (Then again, some digital recordings miss the mark.) A listen to “Orange Blossom” (and other tracks) from Gardens & Villa’s self-titled CD [Secretly Canadian] was reproduced with its catchy old-school synth vibes and layers of cymbal strikes and taps intact. The floaty flute part popped out of the background more clearly via the Hegel, and its breathy, well-placed accents commanded more attention. Chris Lynch’s tenor vocals soared higher and higher without getting too shrill or screechy (though they almost tend to). Generally, this setup also seemed to lower the noise floor further and throw a more open and three-dimensional soundstage. The placement of the individual musicians on Andrew Bird’s latest release My Finest Work Yet was conveyed just about as well as I’d heard from some far higher-priced systems at recent shows.

In some cases, different amplifier pairings can be like trying different base spirits in a cocktail. With Beefeater gin in your gin and tonic, the drink might taste more straightforwardly of juniper; if you choose Hendricks it might take on a more herbal tinge. Different prices aside, these different flavors register as distinct rather than divergent in any strongly pronounced/exaggerated way. Such were the R11 pairing comparisons between the Sprout100 and the Hegel H90. The Hegel H90’s own clarity seemed to heighten the R11’s smooth-handling coherence and neutral accuracy, while the Sprout100 added a bit more “spice” to the mix on certain tracks—sometimes it enhanced musicality, other times, well, it didn’t. But seldom did its “additives” detract, and the amp’s bass boost function provides some extra fun possibilities. I didn’t prefer one integrated over the other outright; the outcomes depended on the source material and, of course, many other variables. By design, the KEF R11 loudspeakers deliver a kind of purity or neutrality to the sound that can often reveal finer details that result in greater accuracy and realism—attributes that aren’t found every day in more approachably priced speakers like these. They seemingly play well with various amps and within home-theater setups, as well. But I believe it was their top-to-bottom coherence and even dispersion that kept me listening; it helped the speakers sound less like speakers—less like boxes with drivers firing soundwaves at you—and more like music itself. Compelling as it was, this naturalness meant fatigue was never an issue. Setup is simpler compared to many other speakers, and the R series flagship R11s don’t require a palatial room to work their magic. Pleasing presence—sonically and aesthetically—remarkable realism and inter-driver coherence, high value in the cost-to-performance arena…there’s a lot to love about the R11s. With good reason, they’re popular and selling like the proverbial hotcakes. Get ’em while they’re hot!