If you’re an audiophile of a certain age you might well remember your first look at color TV. I do. On a Sunday evening our family sat in front of a spanking-new RCA Victor console model, an enormous (for the era) 21” CRT encased in a walnut cabinet extravaganza that weighed in at a couple hundred pounds, if it weighed an ounce. What I most recall about that night was the appearance of the NBC network logo that preceded its “In Living Color” lineup. It was a stylized rendering of a peacock that famously fanned its resplendent tail-feathers, which up to that point, I had only seen in black and white. As the bird produced its display of plumage, my eyes popped and my jaw dropped (seemingly in unison) at the dazzling burst of rainbow colors that filled the screen.

What does this have to do with reviewing an audio component? Well, this memory was very much in keeping with my reaction to the Ypsilon Phaethon integrated amp. It’s a component of such musical color that it intensifies and stimulates and recalibrates one’s audio senses and expectations like few that I’ve encountered before.

Greece is home to Ypsilon, a boutique high-end manufacturer of renown. The small firm’s output is modest, even by high-end industry standards. But since the company’s formation in 1995, and under the guidance of founder and chief designer Demetris Baklavas, Ypsilon has achieved a reputation that makes it a part of any serious conversation of what it means to be state of the art. The Phaethon is Ypsilon’s sole integrated amplifier. The look is minimalist and purposeful and elegant. In my experience, its build-quality is on a level reserved for only a handful of elite brands. 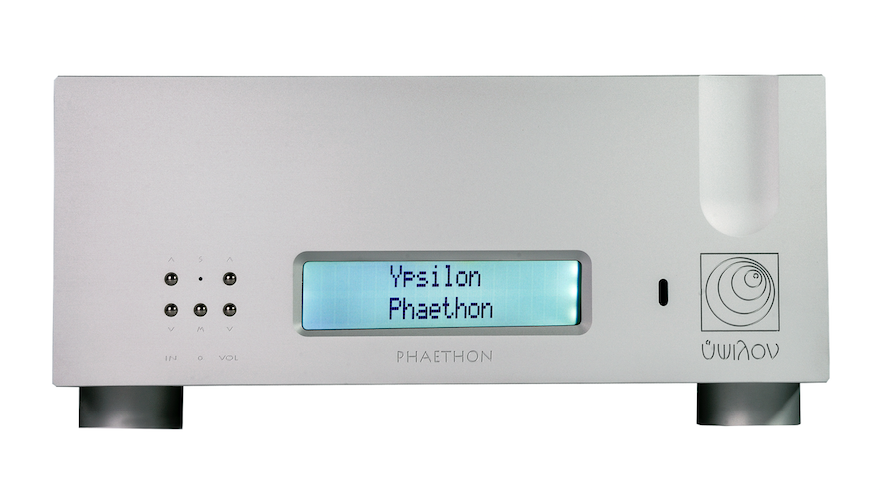 Tipping the scales at well over seventy pounds, the Phaethon’s seemingly impregnable chassis is made of 10mm plate aluminum with a 20mm front panel. The front panel features six small push-buttons to the left of a central LCD display whose brightly lit characters are readable from across the room. The top panel is well vented, with generous heatsinks adorning the Phaethon’s flanks. The back panel includes inputs for three pairs of unbalanced analog RCA jacks and a single pair of balanced XLR connectors. Top-notch binding posts are by WBT Next-Gen from Germany. The AC power inlet is courtesy of Furutech. All normal functions can also be controlled from an aluminum remote control, a veritable slab of metal that feels as if it weighs as much as some components I’ve owned.

It’s All Greek to Me
Phaethon is a hybrid tube-transistor linestage that sports technologies first observed in Ypsilon’s reference-level Aelius monoblock amplifier and PST100mk2 preamp. Rated output is a conservative 110Wpc into 8 ohms. Minimalism prevails throughout the Phaethon topology. It uses only three active gain stages, two of them with 6H30 low-noise valves operating in single-ended Class A for the input and driver stage. Its “bridged, single-ended” output stage is biased in Class A in what Ypsilon describes as the “first, most important watts.” Ypsilon posits that this arrangement offers the flavor of pure single-ended designs combined with the power of push-pull designs. The output stage uses three matched pairs of MOSFETs of the same polarity operating in exactly the same topology for the two halves of the signal. In total, the Phaethon employs eleven transformers, each one built in-house, plus separate power supplies for the tube and output stages, utilizing five power supply inductors for low-noise filtering.

Paramount to the sonic reputation of any preamp stage is the volume control; this is where the delicate audio signal wins or loses. Ypsilon, rather than using the prosaic resistive stepped attenuator or potentiometer, has opted for its own in-house design. It’s a custom and costly transformer attenuator solution that is embedded in the preamplifier section using Ypsilon’s proprietary topology. Similar to the transformer attenuation in the top-line PST100mk2, the Phaethon version uses 31 taps (secondary windings) for up to 58dB of attenuation in steps that range from 3dB to 1.5dB depending on the volume control position. Unlike the typical volume control this arrangement is known for a high level of precision and is completely non-resistive.

Turning to sonic performance, the word that first came to mind was earthy. The Phaethon produced a rich, dark sound, anchored by the sort of taut foundation that seemed to extend into imagined bedrock well below the confines of my listening space. Noise was non-existent. While the Phaethon idled, a velvety, black silence prevailed until the music was cued and snapped to life as if having been released from behind floodgates. The experience was lush and expressive with a push of midrange bloom, and rippling with micro and macro energy. It was obvious from the opening of Vaughan Williams’ The Wasps Overture that the Phaethon signature would veer toward a warmer, near-romantic sound imbued with more tonal shadings than a book of Pantone colors. In keeping with the theme of an angry hive, air swirled from the orchestral stage in a flurry. String sections were intricately layered, solo instruments appropriately focused but fully integrated within the warm body of the orchestra. In particular, wood-bodied instruments such as cello, bass viol, or bassoon were fat with harmonics. But as much detail as the Ypsilon coaxed from a performance (and there was an awful lot) it never lost its grasp on the bigger sonic picture, or reduced music reproduction to an intellectual exercise or lengthy checklist of audio criteria.

The sheer quiet of the backgrounds played another critical role. Consider the backing cello in Rutter’s Requiem or the concert harp during The Wasps as they softly blend with the orchestra—low-level information like this was never smeared and never lost image focus. Rather, it was expressed in the context of its own unique radiating space untrammeled by any whiff of electronic noise or coloration that can cling like a halo at these quieter levels.

Later I moved onto selections from Harry Connick Jr., and the Manhattan Jazz Quintet. These are both good, well-engineered recordings but nothing out of the ordinary—basic 16-bit/44kHz compact discs, rather than high-resolution files or LPs. But I am familiar with them, what they do and don’t do. The player was the dCS Puccini, cabling was Audience Au 24SX. The speakers were my own, a well-broken-in pair of ATC SCM20SL compacts, which at 84dB sensitivity wouldn’t have suggested being a great match for the Phaethon. However, my familiarity with these speakers, my own sense of their capabilities only magnified my initial listening impressions of the Phaethon. The amp was clearly extracting more music from a loudspeaker that I thought I knew like the back of my hand. During the lively exchange between acoustic bass and the Branford Marsalis saxophone heard on the Connick track, “A Nightingale Sang in Berkeley Square” I heard a placement specificity and depth that beckoned me into the recording studio. Similarly, the MJQ’s version of “Autumn Leaves” was no less exacting, with Lew Soloff’s trumpet solo presenting dynamic peaks with enough explosive pop to make me dive for the volume control.

The Phaethon seemed to have a special place reserved in its circuitry for vocals. Reaching beneath the actual notes, it resolved the sense of the artist’s flesh and body—the anchor that supports a singer’s performance. This was ever-present for opera voices from Renee Fleming’s honeyed soprano to a bass-baritone such as Bryn Terfel, who can shake rafters with his chesty overtones. But even on a pop/rock recording such as Fleetwood Mac’s “Landslide” there stood Stevie Nicks, her vocal effortless with the elasticity of her youth, the smoky rasp in her voice just beginning to tickle the edges of notes [Mobile Fidelity-012]. There was also a spatial clarity in the atmosphere around a singer’s voice, like Connick’s aforementioned “Berkeley Square” performance reproduced as if he were a hologram in physical space. I could imagine him, with feet firmly planted, head leaning into the microphone.

As I listened to Jen Chapin’s cover of “You Haven’t Done Nothin’” from ReVisions [Chesky] I mused at the responsiveness of the Phaethon to impart the texture and tonality of acoustic bass, and the throaty, burbling gravel voice of a baritone sax. This level of transparency went well beyond the general pitch of a note. It encompassed the transient strike across the string—the tonal punch, and the decaying resonances.

As I’ve often observed, the more natural and acoustic-based a recording is, the more a great amp is allowed to flex its muscles and fully strut its stuff—at least in the harmonic, timbral, and textural senses. Combine these capabilities with LP analog playback, and the Phaethon is arguably at its most persuasive. A prime example is Impex Records’ recent and flat-out remarkable reissue of Legrand Jazz [IMP 6028]. Overflowing with an all-star cast of jazz players, this LP illustrated the extent of the Phaethon’s resolution and its facility to dive deep into the timbral and textural complexities of brass and wind. During the romping “Rosetta,” Herbie Mann’s soaring flute and Ben Webster’s growling tenor suddenly materialized in my room lit by micro-dynamic and tiny transient accents. The impression was that of a three-dimensional portrait of each player immersed in the venue’s ambient environment. Even in the diminished reality of my smaller listening space, where scale is attenuated, the truth of the performance was as clear as the bell on Miles Davis’ trumpet. 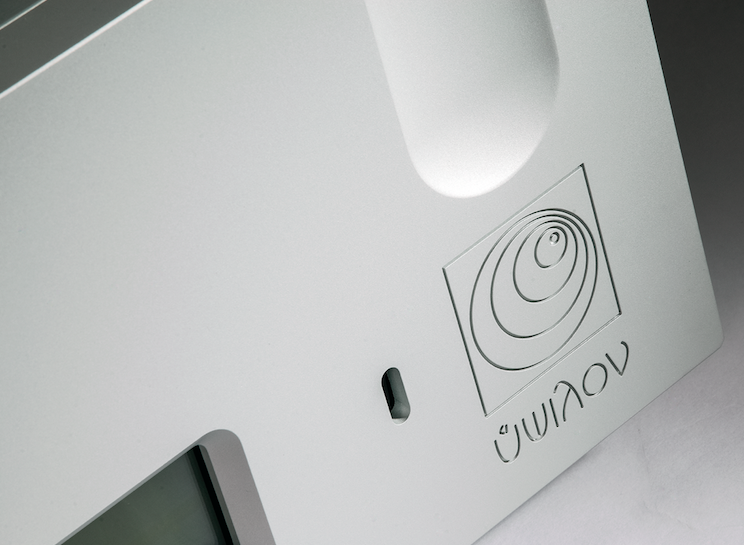 Having reviewed some pretty fair integrated amps over the years I should add that the Phaethon most nearly shares a sonic kinship with the Vitus Audio SIA-25 and to a slightly lesser extent, the Pass Labs INT-250 and MBL Corona C51. If memory serves, the Vitus matched the low-level resolving power and full-bloom tonal character of the Phaethon but lagged very slightly in areas of dynamic slam, bass timbre, and stage dimensionality. While the Ypsilon doesn’t quite have the arm-twisting, subterranean low- frequency reserves and steely grip of the mighty Pass it does edge the Pass with a heightened element of timbral naturalism that coddles the ear in its authenticity. It has some of the darker, more sensuous qualities that make the MBL so dreamy but dispenses a soothing sweetness and air in the treble that the Corona can’t quite match. This particularly addictive treble quality was ingrained in the Phaethon—that and its wideband tonal color are certainly owed at least in part to its tube preamp stage.

But what about the price? Fair enough. Yes, it’s dearly expensive—prohibitively so for most. If it were a product that came up short of a state-of-the-art nomination then I’d have a large bone to pick with this amp. But the Phaethon is more than worthy. Frankly it looks and sounds like money. And if I had the dough I’d have no problem dropping it on a Phaethon. In my years of reviewing, it’s rare to have had such a profound reaction to an integrated amplifier. Ypsilon has created a component that enables a musical connection that’s both intellectually and emotionally rewarding. At the Olympian heights where the Phaethon resides, only a handful of amps challenge it but overall, and in my experience, there are none better.