This past January the discerning cultural critic David Denby wrote an essay in The New Yorker about high-end audio. It was called “Audiophilia Forever.” In it, Denby explained that he had recently rekindled his passion for the high end by visiting several stores in New York to audition a variety of new equipment, ranging from entry-level to quite pricey. He loved what he heard, but never got frustrated that it didn’t quite match the sound of the real thing. Instead, he took it philosophically: “The sound of live music is ineffable. The goal can never be reached. The quest itself is the point.”

Amen to that. Over the past decade or so, I have very much enjoyed following the evolution of Ypsilon electronics, both at audio shows and in my own system. Ypsilon, which is manufactured in Athens,Greece, is essentially a bespoke operation—all transformers are wound by hand—that has steadily been attracting more attention. TAS’ Neil Gader, no newbie when it comes to judging audio equipment, declared in December 2017 in these pages that the Ypsilon integrated Phaethon is a component that “intensifies and stimulates and recalibrates one’s audio senses like few that I’ve encountered before.” It would be difficult to disagree.

I first listened intently to the full Ypsilon rig at the Rocky Mountain Audio Fest several years ago, where I was most impressed by its suavity in disentangling complex musical passages. There was a lissome quality to the music, a lack of grain and an abundance of tonally purity, that took my breath away. The first piece of Ypsilon kit, as the Brits like to say, that really impressed me in my own system was the Aelius monoblock amplifier, which I coupled to my beloved Magnepan 20.1 loudspeakers. I was smitten by the Aelius’ speed and clarity, particularly in the treble. But after I moved to the Wilson XLF loudspeaker, I took a deep breath and the sonic odyssey continued. I switched to a very different amplifier in the Ypsilon line—the much more expensive and elaborate SET Ultimate Mk. II that outputs about 120 watts. It coupled very well to the XLF, which presents a fairly benign load to amplifiers. The SET version, which Ypsilon chief designer Demetris Baklavas has upgraded several times over the years at my home (including replacing the copper with a silver interstage transformer), has a very continuous, for lack of better word, sound that I ascribe to the fact that it is always operating in Class A. When it comes to improvements, Baklavas, for the most part, has ensured that buyers of earlier versions are not left out in the cold, as it were, but can upgrade their respective components if they wish. 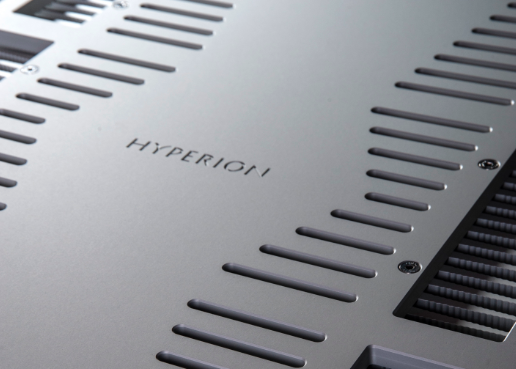 When it came to the SET amplifier, the move from copper to silver did not result in a faster but more strident sound, as often seems to be the case with high-end gear that uses silver wiring. Instead, the switch actually created an even more mellifluous and supple presentation. Now Ypsilon’s Baklavas has introduced a new monoblock Class AB amplifier with transformers wound entirely with silver wire. It outputs around 100 watts in Class A before switching to Class B and boasts an overall 370 watts into 8 ohms. All that Class A power, friends, means that this hefty amplifier runs pretty darned hot. It’s a hybrid design, as are most Ypsilon amplifiers, with a stout 6H30 or 5687 tube on the input (there are two sockets, so you get to choose which you want to employ), along with an EZ81 rectifier tube. So the obvious question for me was: Was it time to make the move to the Hyperion? Or would the SET amplifier continue to rule the audio roost?

Upon inserting the Hyperion into my system, I enjoyed the sound but was not overwhelmed. It was a little grainy and closed in. But I quickly realized it was going to take a lot of break-in to hear what the amp was capable of. After a couple hundred hours and some tube fiddling, it became apparent to me that Ypsilon had hit a homerun with its new statement amplifier. When it comes to continuity on vocals, there is still something about the SET amp that I don’t think the Hyperion matches—a kind of ineffable (there’s that word again) quality that is hard to describe but definitely there. Overall, however, the Hyperion is hands-down the superior amplifier. Put bluntly, it is one of the very finest I have ever heard. Uniting power and finesse, refinement and seductiveness, this magnificent amplifier offers an enticing blend of the virtues of the Aelius and SET that my Wilson WAMM Master Chronosonic loudspeakers positively feast upon. There is a lucidity and lack of midbass bloat with the Hyperion that makes it an excellent match with the WAMM. I definitely preferred using the 6H30 to the 5687 because it added a good deal of slam and drive to the presentation.

Because the WAMM is harder to drive than the XLF, one advantage that the Hyperion had going in was extra power. The SET amplifier was able to drive the WAMM, but the added wattage of the Hyperion meant that the WAMM was a lot more relaxed on demanding passages, particularly in the nether regions. Plop on a big Mahler symphony, a Verdi overture, or a sassy Count Basie number, and the Hyperion sails right through it.

What really struck me in listening to the Hyperion was the rock-solid way instruments were grounded in the soundstage. Since I’ve been noodling around on the trumpet for decades, I’ve always had a soft spot for brass music. On that aforementioned Verdi overture (a Decca recording of the Cleveland Symphony), some of the brass choruses came through with a life-like sonority—you heard the entire chord, from top to bottom, resonating with a golden glow. On an early digital LP from Columbia that features the Canadian Brass and the Berlin Philharmonic Brass, the distinctive piping quality of the piccolo trumpets was reproduced with remarkable fidelity. One track on CD that I’ve been listening to quite a bit is the Chicago Symphony Orchestra’s superb live recording of Bach’s Passacaglia and Fugue in C minor. The ability of the Hyperion to anchor the brass instruments in space was truly phenomenal. You can pretty much discern the size of the bores of the various trumpets and trombones and see them arrayed from left to right and front to back. When Josh Clark of Transparent Audio visited me recently, he was floored by the resonance and power of the trombones, French horns, and tuba as they chugged away in counterpoint to the trumpets. “The trumpets sound great,” he said. “But I’ve never heard those other instruments reproduced like that in the lower sonic regions,” he enthused. I understand what he meant. While the music was presented with total refinement, it also had that hair-raising quality you can experience when you suddenly hear a powerful race car engine throbbing and realize just how much of that power is waiting to be unleashed on the speedway.

At the very same time, I would caution that all its power doesn’t simply mean that the Hyperion will blow down the walls of your listening room. Even more impressive in some ways is its ability to convey soft passages without a loss of resolution or immediacy. It was quite entrancing to listen, for example, to a Harmonia Mundi CD of Javier Perianes playing Schubert’s piano sonatas in B flat major and A major. The Hyperion helped to unveil Peraines’ supreme craftsmanship in the andante movements, where the music seems to hover in the air for what feels like an eternity before resolving into a new chord. This very ability to convey the pianissimo passages with such palpability—a kind of reach-out-and-touch-me character—meant that the monumental passages (and they are there, believe you me) came across with even greater conviction and force. The ability of the Hyperion to deliver the rolling thunder of the left hand on the piano was truly something to hear. Obviously, the Wilson WAMM has something to do with this as well. But the Hyperion does an excellent job of maintaining pitch stability in the bass region, which is something that I think tends to get lost in less ambitious systems.

Something similar, I think, occurred on an Igor Levit recording of Bach’s partitas. Here I would single out the allemande movement of Partita No. 4, which seemed to flow endlessly. The Hyperion lets you discern everything—the touch of the pianist, the use of the pedal, and the lingering sense of the note decaying into space. At points, the verisimilitude is so great that you’re fooled into thinking the piece has ended, only to hear a fresh passage begin. 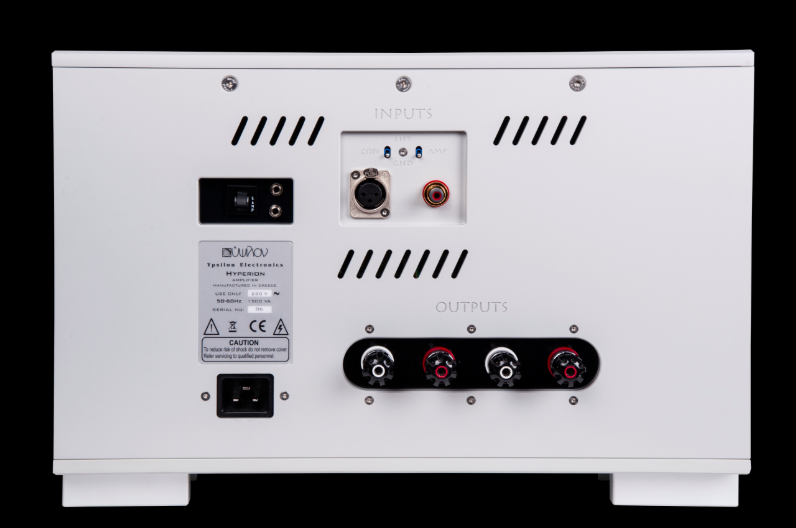 A lot of this has to do with an absence of noise: The equipment itself is dead silent. You won’t hear any transformer hum emanating from the Hyperion, and you can stick your ear up to your tweeter and shouldn’t hear much more than a faint buzz there, either. To put it another way, transparency has always been the hallmark of Ypsilon products. My own sense is that the company’s equipment seeks to poke into every nook and cranny of the performance space, seeking out the smallest details that it can excavate and hold up for your scrutiny. It’s no bumbling Inspector Clouseau but a dapper Hercule Poirot. Great care and attention is lavished on the most minute musical passages or instrumentation. Many years ago, TAS editor Robert Harley made an astute observation in a review of Wilson loudspeakers that has stayed with me since I read it, which is that it is the small details that our ear gravitates toward and that make an instrument sound more lifelike. The more of those details that an amplifier like the Hyperion can evoke, the more convincing a recording sounds.

But I hasten to add that this isn’t an accumulation of detail for detail’s sake. Rather, Ypsilon gear has a warm, burnished sound that may just be a pinch more beautiful than what a lot of other equipment offers. It’s not on the level of the golden glow that Conrad-Johnson is known for, but there is definitely something of a pulchritudinous touch to the musical affair when Ypsilon gear is being employed. When listening to standup bass on jazz albums, for instance, I think the Hyperion provides a tonally rich sound without sacrificing any alacrity. Since I’m in the camp that thinks that, in one way or another, all gear has a coloration, this doesn’t bother me. Quite the contrary. I’d rather that a component err on the side of musicality, bliss, and all the other things that can gently propel you into a meditative state when listening to your system. The Hyperion does this. There are other amps that will play even louder or go deeper in the bass or provide even greater grip on the notes. But the whole package that the Hyperion offers makes it quite irresistible. So if you’ll permit me a little hyperbole—and since when has that ever figured in the high end?—I’d say that Demetris Baklavas has produced something worthy of the Greek gods. If you’re currently resting in base camp on your audio journey and looking for a proper ascent, then the Hyperion may allow you to steal a march on the path that leads to that elusive sonic Mount Olympus.