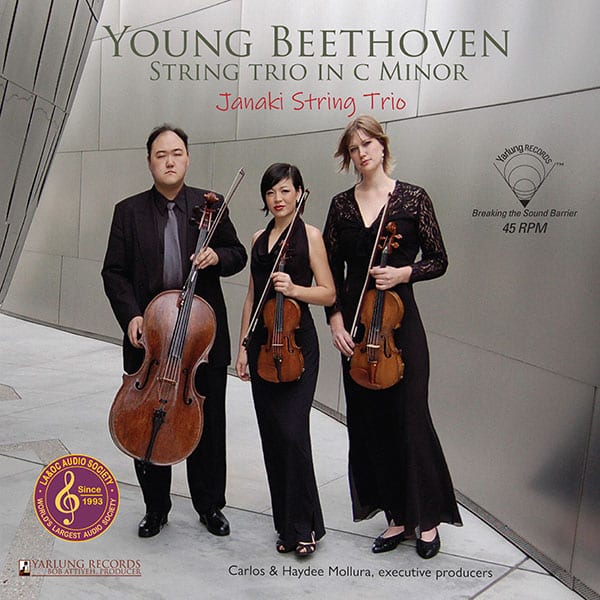 A bit of housekeeping: this performance of Beethoven’s Trio, Op. 9, No. 3, came out on the Janaki Trio’s 2006 Debut CD along with pieces by Penderecki, Barabba, and Lefkowitz; Debut is also available in hi-res (24/88.2) at HDtracks and Qobuz. Yarlung released the Penderecki and Barabba on a 45rpm platter a few years ago, and that landed a spot on our Super LP List; this Beethoven belongs there too. The impressively natural miking picks up the instruments’ resonance and overtones but misses most extraneous noises. The LP has more warmth and hall richness than the hi-res, putting you right in the first row rather than at a remove. Beethoven was known for setting some of his most dramatic works in C minor: this trio joins the Pathétique Sonata, the Coriolan Overture, the Fifth Symphony, and the final piano sonata in that world. Three instruments rather than a full string quartet, however, means turbulent emotions are balanced by transparent textures in a delectable tension. Also, the piece stands at the crossroads of the Classical and Romantic eras, its thunder countered by wit and laughter. The Janaki Trio conveys all this in a vivid, pulsating performance.