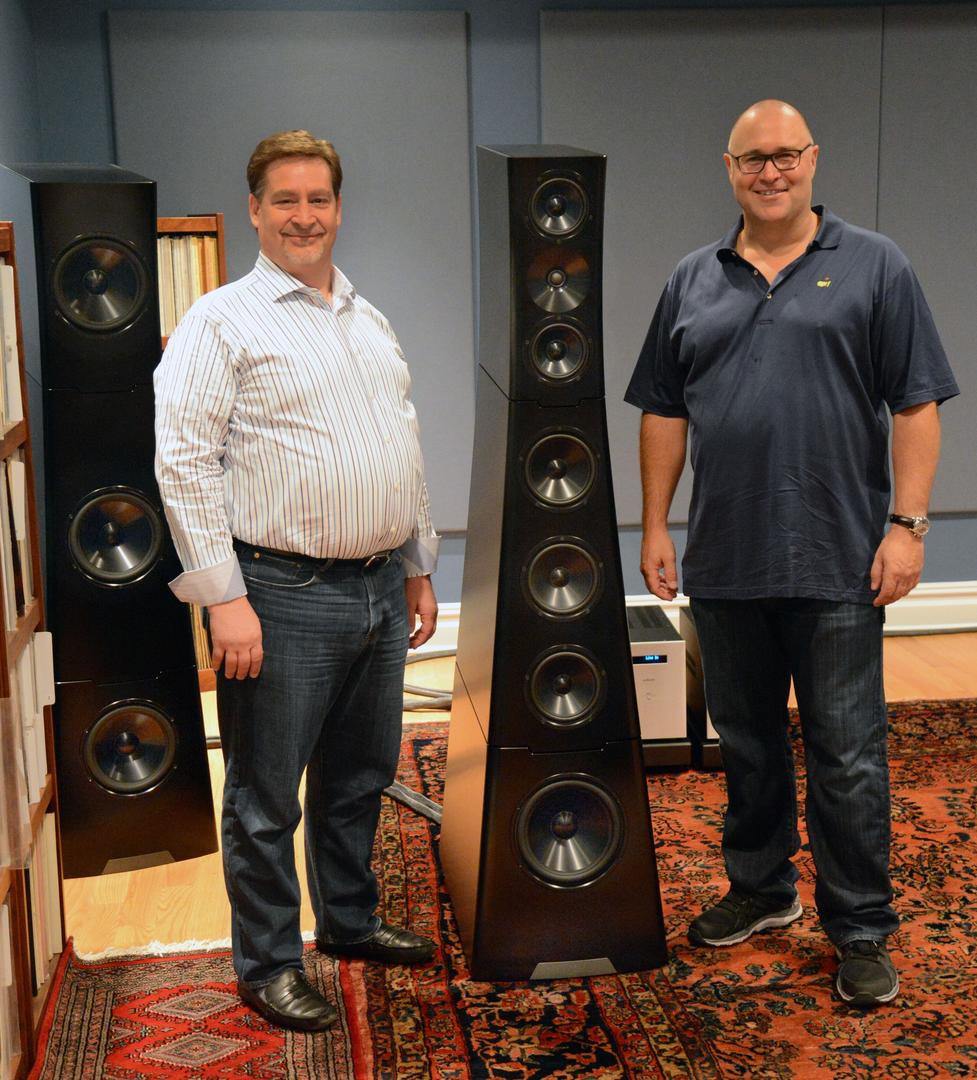 Over 18 months in development, the XV represents everything founder Yoav Geva has learned and can employ in building a statement loudspeaker. One of the first things that sets the Sonja XV apart from other YG products, and any of its competition as well, is the new BilletDome tweeter (pictured below).

Tweeters must handle extreme acceleration that alternates thousands of times a second, generating something on the order of 1000 G’s. (By way of comparison, fighter pilots must be conditioned to handle up to 9 G’s, less than one one-hundredth that of what a tweeter must endure.) YG wanted to find a way to build a tweeter that did not suffer the natural roll-off above 20kHz like soft domes, and that would be free of the ringing and resonances common to all metallic-based dome tweeters above their upper-frequency limit. After considerable thought and effort, the solution was found combining a stiff, light, airframe machined from aluminum billet, covered by, and supporting, a resonance-free soft dome material.

The result is BilletDome, which like every other constituent part of YG loudspeakers, from each BilletCore driver, right down to the speaker cable binding posts, is fabricated in the YG factory in Arvada, CO, immediately north west of Denver. Weighing just 30 milligrams (about one one-thousandth of an ounce), the unique airframe supports critical sections up to 14 times thicker than the typical hard dome, and YG says it represents the most complex mechanical invention they have developed to date. For more info, YG has posted a video about the new tweeter technology.

I saw in-house test results comparing three different domed tweeters: a titanium dome, a beryllium dome, and the YG BilletDome. Using a calibrated laboratory-grade force gauge to assess the structural integrity of each, the titanium dome failed at just 0.72 pounds of force, roughly equivalent to 900 Gs. The beryllium made it to 1.02 pounds, roughly equivalent to 1300 G’s. YG’s new BilletDome withstands nearly half again as much force as the beryllium dome, or 1.465 pounds, nearly 1800 G’s, before it fails. Even these exemplary test results didn’t prepare me for how exceptional this tweeter would sound.

Bill had assembled an exceptionally transparent and articulate system in GTT’s 20′ by 35′ by 11′ primary listening room (pictured below). Sources were the Kronos Pro Limited Edition turntable, featuring the new SCPS1 power supply, or DC Accumulator (itself an absolute marvel), the Black Beauty tonearm, and an Air Tight Opus 1 cartridge, feeding an Audionet PAM G2 phonostage for analog, while an Audionet ART G3 CD player (with EPX power supply) and the DNC Streaming DAC (with EPS G2 power supply) provided ones and zeros. The preamp was the Audionet Pre G2, feeding two pair of Audionet MAX mono amps, used in left/right bi-amped configuration, and all cabling was Kubala-Sosna Elation series. The resultant system would retail for roughly $600k. 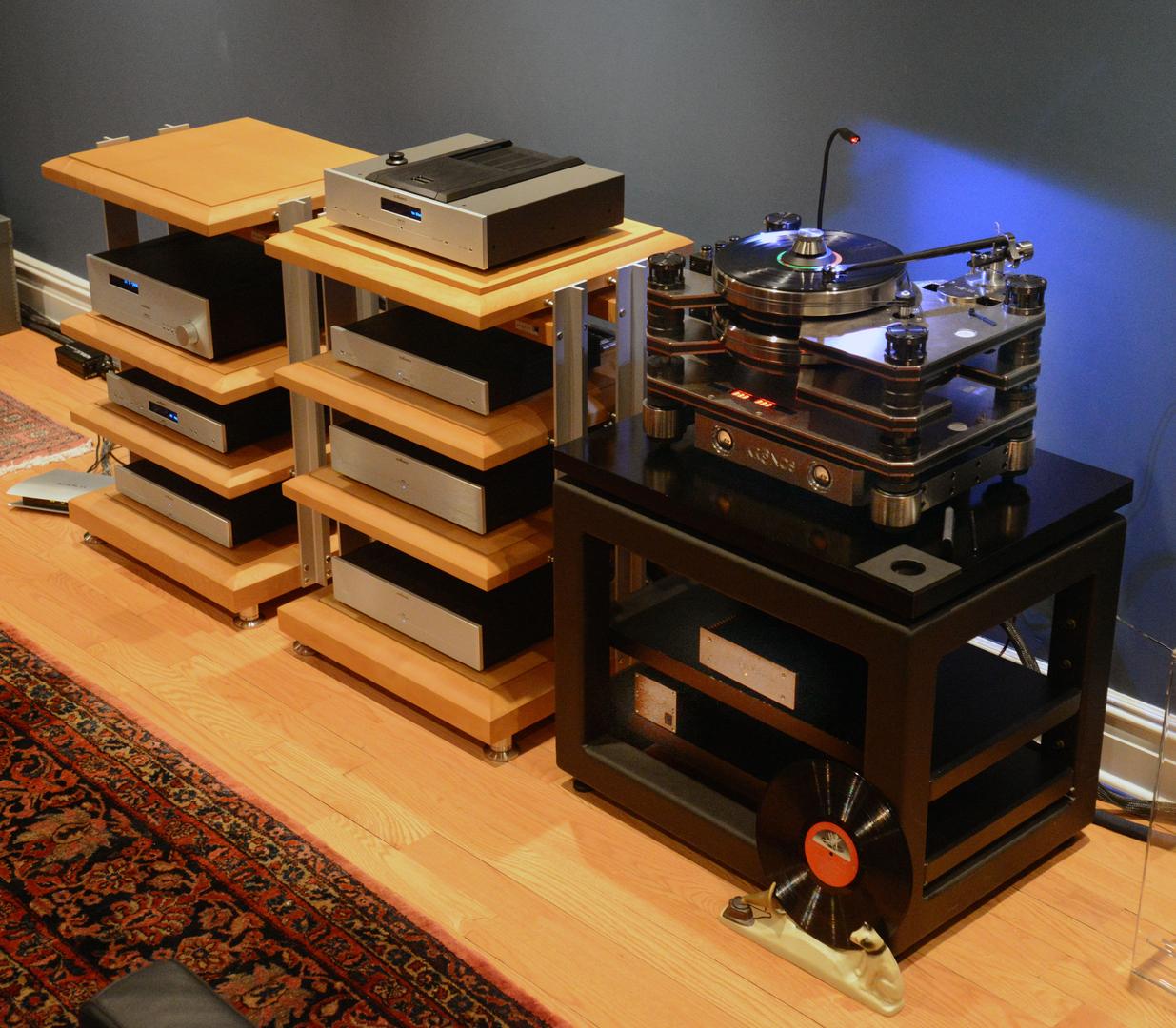 First up was my Respighi’s Feste Romane/The Pines of Rome, Lorin Maazel directing the Cleveland Orchestra [Mobile Fidelity UHQR]. My jaw dropped as we started into this LP. Dynamic scaling was spectacular, remarkably like a good horn system, but scaling all the way down in frequency to the deepest drum and doublebass contributions.

The sound was exceedingly effortless, exquisitely fluid sounding, with remarkably explosive dynamic events. This sense of organic ease was a consistent attribute I found myself noting again and again over the entire audition.

All of the percussion on this 1970 Afro-Caribbean, blues/rock masterpiece—maracas, timbales, congas, bongos, etc.—were stably placed and precisely sized and located, with no wander or bloat, and each separate strike or hand fall was established with unique individuality. Timbre was rich, full, and exquisitely textured.

Moving to Rickie Lee Jones’ 1983 EP Girl at Her Volcano [Warner Bros.] only served up further validation of the Sonja XV’s singular dynamic expressiveness and ability to convey the weight and distinctiveness of the deepest bass. Its ability to portray the individuality, power, and impact of rhythmic lines yet integrate the entire fabric of a composition with an inescapable coherency and continuousness was extraordinary.

Finally, Bill played Falla’s The Three-Cornered Hat [London], and I was immediately transported back to the venue. The hall’s space and size were revealed; indeed, they were almost forced on you, so apparently were they reproduced. Instruments were so naturally rendered, again with an inescapable ease and articulated clarity, with seeming boundless space, effortless air, and irrefutable body and bloom. Their macrodynamic expressiveness was alarmingly good. This was a revelatory listen.

Another of the Sonja XV’s unique gifts is its “of one voice” performance, the most indisputable and convincing I’ve yet heard from such a four-cabinet, complex-driver speaker system. Sonja XV is supremely integrated, fully coherent, with a wholly organic sound, exhibiting none of the discontinuity (most apparent with the external woofers) I’ve noted with virtually all other such systems.

This pioneering and benchmark-setting creation from YG is quite simply the most articulate, accurate, and musically engaging loudspeaker system I have heard. Period. I’ve heard speakers that sell for nearly four times as much that can’t begin to touch the Sonja XV in dynamic scaling, articulation, effortlessness, bass weight, transient speed, transparency, and individuality of pitch definition. The Sonja XV’s ability, especially as a 10-driver-per-channel, four-tower system, to communicate with a singular, cohesive, unified voice is unsurpassed in my experience. And its BilletDome tweeter is the most articulate, revealing, musically compelling treble transducer I’ve yet heard, easily surpassing the performance of any of the treated beryllium domes that have, until now, held my favor.

The YG Acoustics Sonja XV sets a new standard in my thirty-plus years of experience, one that still has me reeling as to how clearly and effectively it has accomplished its goals. My hat is off in recognition of a simply superb effort by Yoav Geva and the YG Acoustics team. Regardless of your ability to afford such a product, should you find yourself in a position to hear them, you owe it to yourself to hear a product that truly represents today’s state of the art.

The following is a press release issued by Shunyata. November […]

The following is a press release issued by Albedo Silver […]

The following is a press release issued by AudioQuest. November […]

An Open Letter to All Show Attendees + RH Response

I enjoyed the reports from you [RH] and your various […]