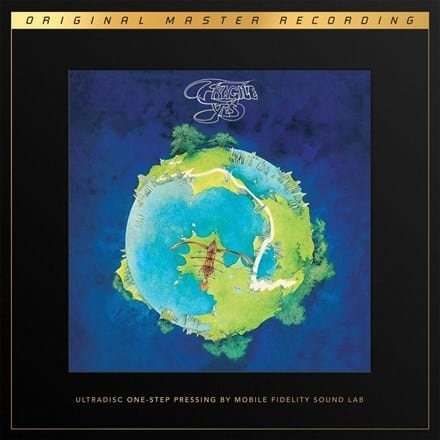 Yes, indeed—here’s yet another vinyl remaster of Yes’ seminal, identity-defining fourth studio album, November 1971’s Fragile. This time, it’s Mobile Fidelity’s turn, resulting in two 180-gram, 45rpm UltraDisc One-Step LPs making up a 7,500-piece limited edition, as mastered by MoFi’s Krieg Wunderlich and pressed on MoFi SuperVinyl at RTI. The overall breadth of this One-Step offering brings into further focus both the collective and singular strengths of this definitive Yes incarnation. In fact, that’s how you should listen to it—first to enjoy the compositional prowess of the whole, next to zero in on the contributions of the individual bandmembers. That way, each successive spin will bear additional aural witness to Jon Anderson’s clever “sharp, distance” whisper-to-a-scream lead-vocal choices saturating “Heart of the Sunrise,” Bill Bruford’s deft cymbal and stickwork throughout “Roundabout,” Rick Wakeman’s piano-key resonance during the transitional break in “South Side of the Sky,” Steve Howe’s adroit acoustic-string touches on “Mood for a Day,” and Chris Squire’s low-end thunder percolating the transition from “Long Distance Runaround” into “The Fish (Shindleria Praematurus).” There’s no roundabout way of saying it: MoFi’s One Step Fragile is a true heavyweight SuperVinyl champion.