I started this review by unplugging absolutely everything. My amp, my preamp, and my phonostage were shuffled off to a closet. All those shiny metal boxes and their pretty lights, hidden from view. In their place, a single black behemoth with a huge number of different toggles, switches, and dials, plus multiple different antennae jutting out the back. This single box replaced everything I was using before, all packed into less space than my preamp was taking up, and was capable of doing even more than I could have guessed at first sight.

I’m writing about the Yamaha R-N803 network receiver. Since this is Yamaha we’re talking about, there are three versions of this “network receiver,” each with slightly different features, power output capability, and price. The R-N803 is the top of the line and retails for $799, which is the upper end of what I consider entry-level, but it’s actually pretty affordable for what you get. It puts out 100Wpc into 8 ohms and is rated up to 160Wpc into 4 ohms, so it’ll have enough power to handle the majority of speakers on the market. It even has DSP room correction and optimization, which Yamaha calls YPAO. But really, you’re not buying the R-N803 on the basis of pure specs alone. You’re buying the R-N803 because this monster does absolutely everything.

I’ll begin with quickly listing a few features that only scratch the surface of what the R-N803 can handle. There’s a moving-magnet phonostage for your turntable, both optical and coaxial inputs for digital components, several line inputs, WiFi and streaming capability, Bluetooth, AM/FM tuner, and far more. Basically, once you get the R-N803 up and running, there’s no real reason to have a ton of boxes clogging up the living room. It did everything I needed it to do, and some things I didn’t even know I needed. 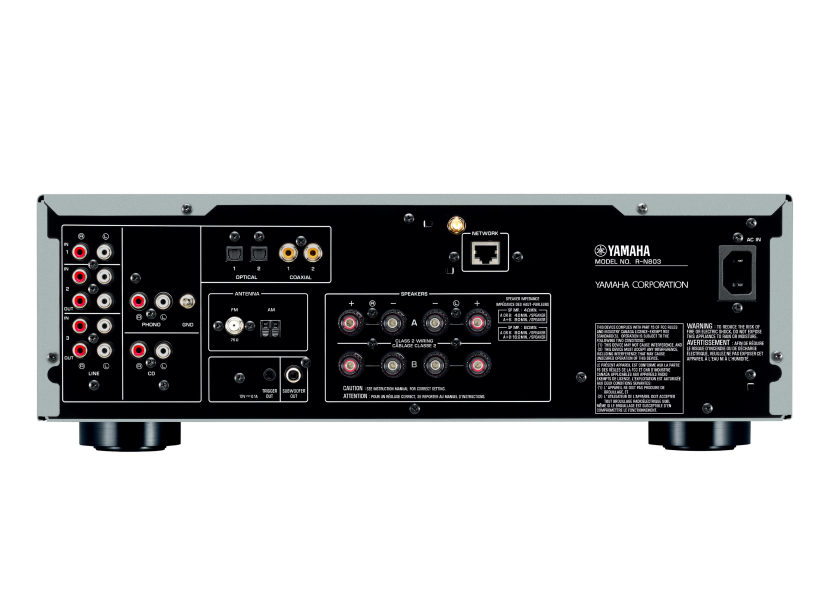 There’s this idea in hi-fi that a single box can’t perform a ton of different functions, or at least it can’t perform them all well. There’s definitely some truth to this, since the more you try to cram into a single chassis, the more designers have to make little sacrifices here and there, and those sacrifices add up. I’m not saying that the R-N803 is a magical machine that’ll match any component system step for step, because that’s not really the point. For me, the beauty of something like the R-N803 is its simplicity and accessibility, and the horizons it could easily open up for more dedicated and serious listeners down the line. What it does, it does pretty well, and it hints at an even better future if you’re so inclined.

Setup was easy, as it should be. There’s only one box to install, so mostly I was moving all my other stuff out of the way. I stuck it in my rack, plugged it in, powered it up, and cracked open the surprisingly hefty user manual. I considered going in blind and trying to ferret my way through the menus on the illuminated faceplate, but I’m starting to appreciate the value of an efficient and well-written manual. Once I did some reading, I realized that the R-N803 really is as simple as simple can be, and I was playing a record within five minutes of getting the unit on the shelf. That said, I did run into one immediate and glaring problem: The R-N803 works great with iOS and is geared toward the Apple crowd, as it natively handles AirPlay, but Android is missing some little features here and there. Since I’m a Google Pixel user, I had to borrow my wife’s iPhone to test AirPlay and other iOS-specific features. I wish it would work with Chromecast, but hey, I get it, iOS is more popular. Just saying Android needs love too, Yamaha. And Chromecast is awesome.

I didn’t know it, but I missed the radio. I used to have an FM tuner in my system, which got axed six months back or so, but I really liked being able to listen to 88.5 WXPN when I was feeling too lazy to get up and flip records. It was a little thing, but it was really great, and sounded pretty nice. On top of that, the R-N803 has Internet radio connectivity and a surprising number of decent stations already programmed through a relatively clunky menu system. Plus, there’s a podcast setting, although it was pulling mostly German-sounding stuff. The manual states that Internet radio uses Airable Radio, which is owned by a German company, so that explains that. Anyway, FM reception was clear and crisp with the included antenna, and the Internet radio worked flawlessly once I set up my WiFi connection.

One very minor criticism on the Internet front: The WiFi works with 802.11b/g/n, which all transmit on 2.4GHz band, a very common frequency used by a lot of transmitting electronics. Most new devices these days support 802.11ac, which can use both the 2.5GHz and 5GHz bands. It’s not all that big of a deal, but it’s worth noting that 5GHz is typically faster, assuming you don’t have a ton of obstructions between your device and your wireless router, and will have less interference from other transmissions in the area. Since my R-N803 is about five feet from my router (the Linksys Velop mesh network, which is totally cool if pretty unnecessary for my space) the faster but shorter band would definitely be a benefit when trying to stream high-quality music. At the end of the day though, I didn’t have any issues with the WiFi dropping out or any big noticeable drops in quality, so it’s not much of a complaint, and Yamaha does include an Ethernet port for a wired connection, which would negate any of these minor quibbles anyway.

Truth be told, I’m not much of a digital guy. I can’t remember a world without computers and the Internet, but I’m still more drawn toward vinyl. I have a Spotify account which I basically use to preview new albums before buying a hard copy or as background noise when I’m working or doing dishes. For my purposes, Spotify quality was plenty good enough, but obviously it’s not going to be as good as something like Tidal’s Hi-Fi mode. Listening to the new Arctic Monkeys album on release day was about as easy as it gets with the R-N803, since Spotify is one of the services that comes built-in. In terms of sound it was about what you’d expect: highs and lows were muted, mids were adequate, basically just your run-of-the-mill stream. The real point is though, the R-N803 made it so incredibly easy to pull up that album with essentially no effort on my part. I went from wanting to hear the album before buying it, to actually listening to it in a matter of ten seconds.

That’s the real power of the R-N803. It has so many built-in options for streaming services, such as Tidal, Deezer, Pandora, Napster, and SiriusXM. Not to mention it’s allegedly an Alexis-capable device, although I couldn’t test this function since my paranoia overcomes my desire to have always-listening microphones in my house. If there’s a streaming service that isn’t natively supported by the R-N803, there’s always Bluetooth, and although BT isn’t exactly the highest-fi choice, it still works flawlessly and sounds good enough to enjoy the music. With the Yamaha MusicCast app, you can control multiple different MusicCast-enabled devices, at least in theory. I couldn’t get my R-N803 to connect to the app, despite following the simple directions and devoting way more time than I’d like to admit trying to troubleshoot it. I gave up and never got it working, although I can’t say I feel like I missed anything.

Finally, for me the real test of the R-N803 is the phonostage. I like that Yamaha has the Pure Direct function that bypasses the tone controls. I kept this pressed, although I did play around with the thin rotator knobs that Yamaha is famous for. Hard not to fiddle with a switch when there’s a switch available for fiddling. I started with Father John Misty’s latest album God’s Favorite Customer, the first FJM album I’ve liked since the debut. Bass was deep and resolved, and I actually found myself really enjoying the sound. Mids didn’t have that buttery smoothness of my Cambridge Audio CXA80, and the phonostage didn’t quite extend everything like the Schiit Audio Mani did, but the Yamaha was more than adequate. It was neutral in a good way, not too clinical but not too soft, either. It really suited FJM’s wonderfully produced folk sound nicely.

The R-N803 is not for your seasoned audiophile looking to eke out one more extra tiny iota of sound from that hi-res file. There’s a reason I’ve focused on features instead of sound in this review. The R-N803 is for a particular kind of person, maybe new to the audiophile world and looking for an easy way to dip his toes in. It’s the perfect starter receiver, with solid performance, above-average sound, and features galore.

I left out a lot of interesting bits and pieces simply because there’s just too much to say. In the end, if you’re looking for the convenience of an all-in-one box, or just getting your head wrapped around all this overly confusing audiophile stuff, the R-N803 is your easy ticket to good sound.

The Stones Roll on Wax