Several world or US product premiers were highlights of the California Audio Show from August 9th through 11th in Burlingame California. Wilson Audio, Vacuum Tube Logic (VTL), and Sonus faber unveiled impressive new products and each was making glorious music at the upgraded venue for this year’s CAS. The Wilson Audio Duette Series 2 loudspeaker, the VTL S-200 Stereo Signature amplifier, and the Sonus faber Olympica Model 1 speaker were featured in different Music Lovers rooms, a premier retailer in Berkeley and San Francisco.

Although Wilson Audio had a silent, private unveiling of its Duette Series 2 loudspeaker ($19,500) at the Munich Show, this was the first time the speaker produced sound in a public demonstration. The Series 2 is so new that these speakers came directly from the factory and sounded noticeably better on the second day of the show after they had been run in a bit and resistors from the supplied Series 2 Tool Kit were changed. Users can easily change these themselves to modify the tweeter output +/- 1dB to help better adapt the speaker to different rooms and electronics.

Compared to the original Duette, the Series 2 (~$17,000, or $19,500 with stands) offers more attractive (and functional) styling and dramatically upgraded sonic performance. It sports a sleeker cabinet, still made of X material but more heavily braced and with thicker material in key locations to significantly reduce cabinet vibrations and lower the noise floor, as well as a slanted front baffle to time align the drivers. While the tweeter motor used in the Series 1 and 2 remains the same, the Series 2 employs the Alexia’s rear wave chamber which gives the tweeter better settling characteristics, yielding more natural sound. The 8” woofer is custom-made and is a key to the Series 2’s explosive dynamics, and the speaker is very efficient with a sensitivity of 92dB. The optional dedicated stand hides the cabling and includes a recessed compartment for the new external crossover. 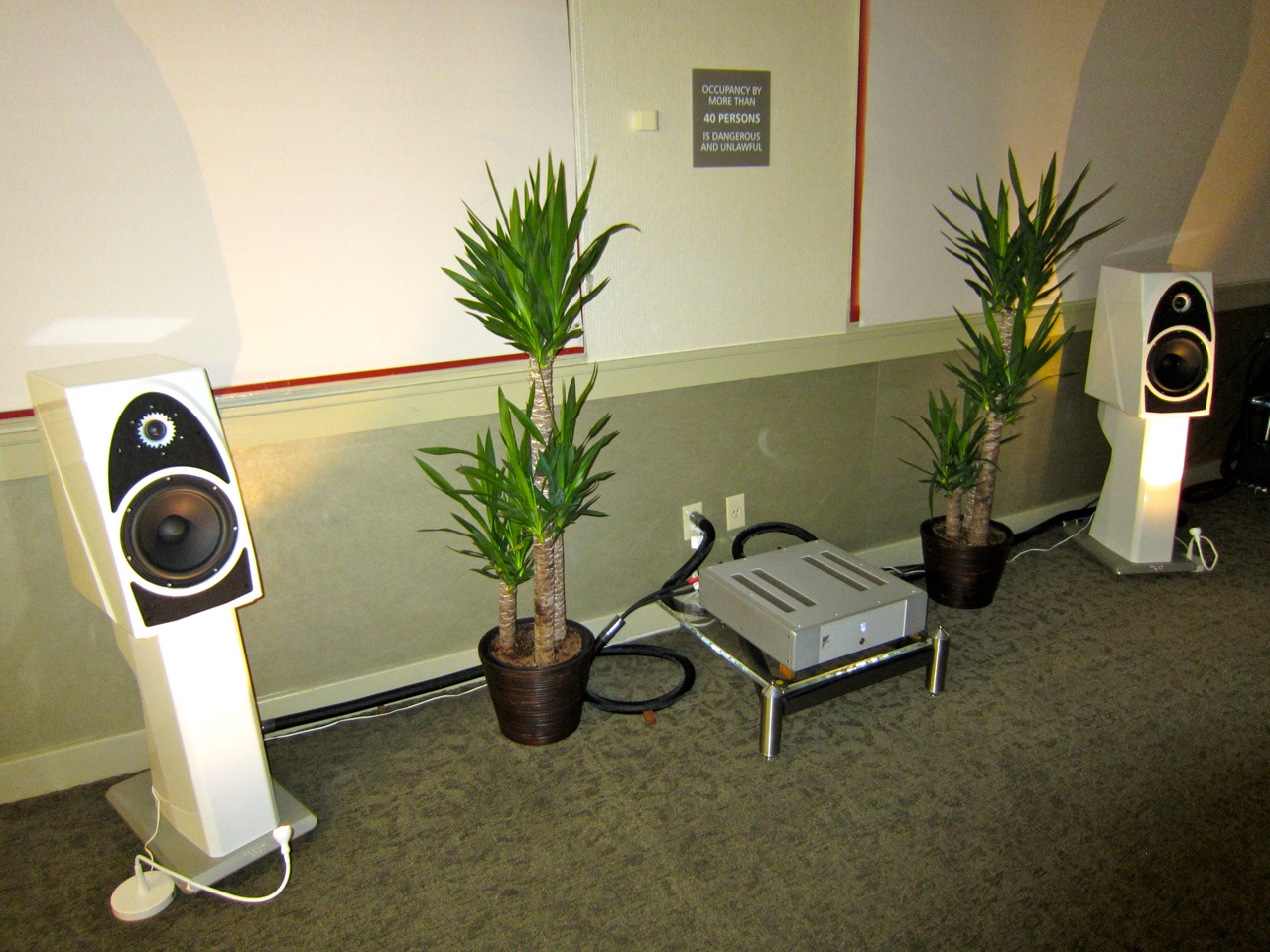 Whereas the Series 1 was designed to be used in a multitude of installation configurations, the Series 2 was specifically designed to be placed against the rear wall, or on a bookshelf. Remarkably, on Shostakovich’s Symphony No. 15, the Series 2 sounded as if it were at least six feet out into the room, like one of Wilson’s more costly floorstanding models, while also capturing the ambiance of the Concertgebouw Hall. In a system with Ayre electronics, an AMG Viella 12 turntable, and Shunyata cables and power conditioning, the soundstage was not only broad but also surprisingly deep. This is a speaker that can effortlessly handle the dynamic swings of a concert grand piano, full orchestra, a live rock concert, or demanding vocal tracks. Renee Fleming singing Handel’s “Oh sleep, why does thou leave me?” sounded gorgeous and amazingly life-like, without any sibilance or strain. In short, the Series 2 tracked Fleming’s demanding micro-and-macro dynamics faithfully and flawlessly. Here’s a terrific rear wall speaker that doesn’t make you feel like you’re compromising performance for floor space. Very nice! 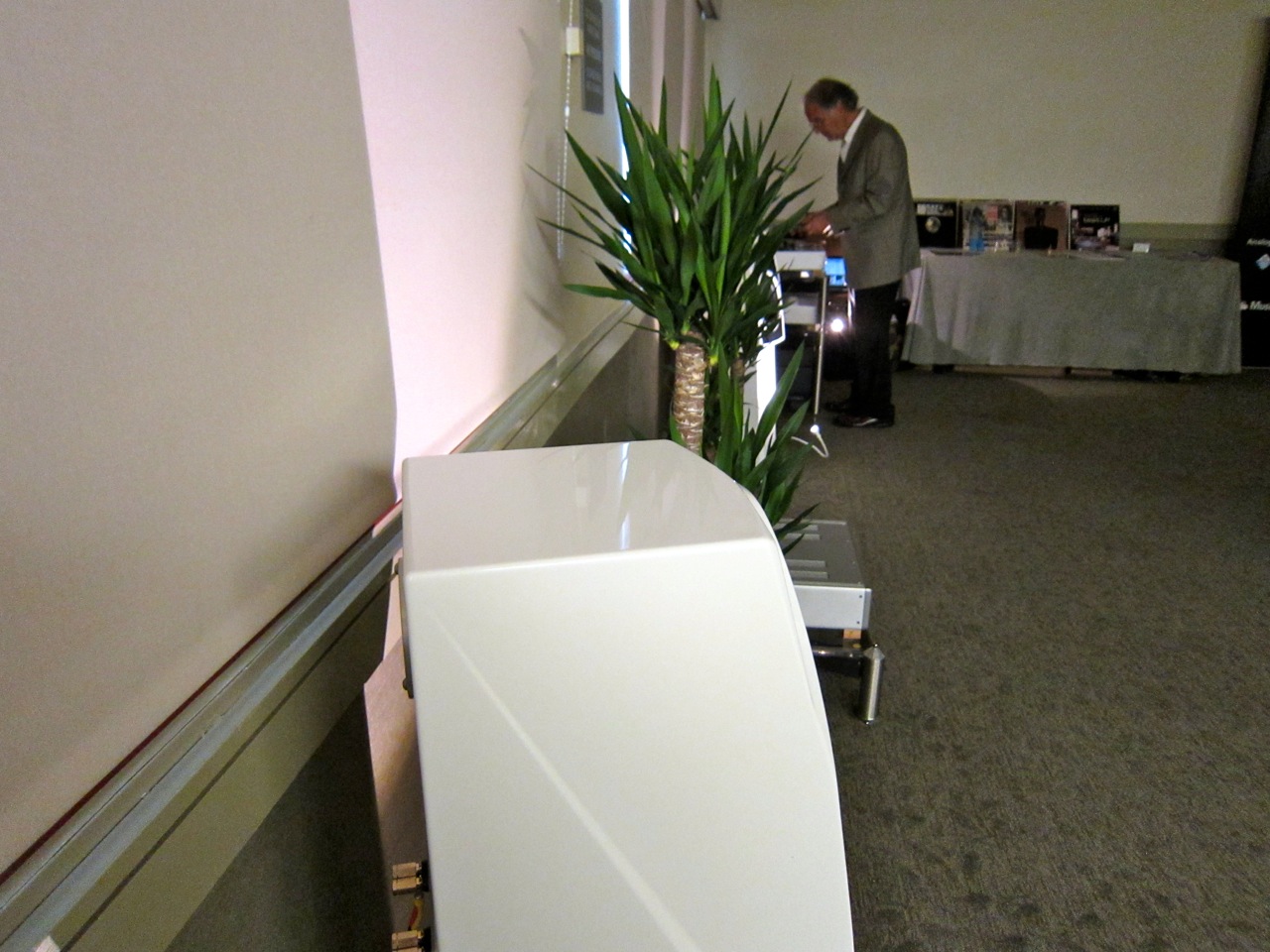 A production version of Vacuum Tube Logic’s new S-200 Stereo Signature amplifier made its world sonic premier in a different Music Lovers room with a system comprised of the VTL TL7.5 III linestage and TP6.5 phonostage, Vivid Giya G-3 loudspeakers, the dCS Vivaldi DAC and transport, the Brinkmann Bardo turntable, a studio Reel-to-Reel deck, and Transparent Reference MM series cables and power products. The VTL S-200 ($10,000) is a fully balanced design from input to output that includes all the features of the more costly VTL MB-450 Series III Signature amps, like automatic bias adjustment and comprehensive fault sensing, but in a single chassis. Like its monoblock sibling, it has a damping factor switch that allows the user to adjust the amplifier’s output impedance to improve the control of different loudspeakers. As one might suspect from its name, the S-200 produces 200 watts/channel into 8 ohms. 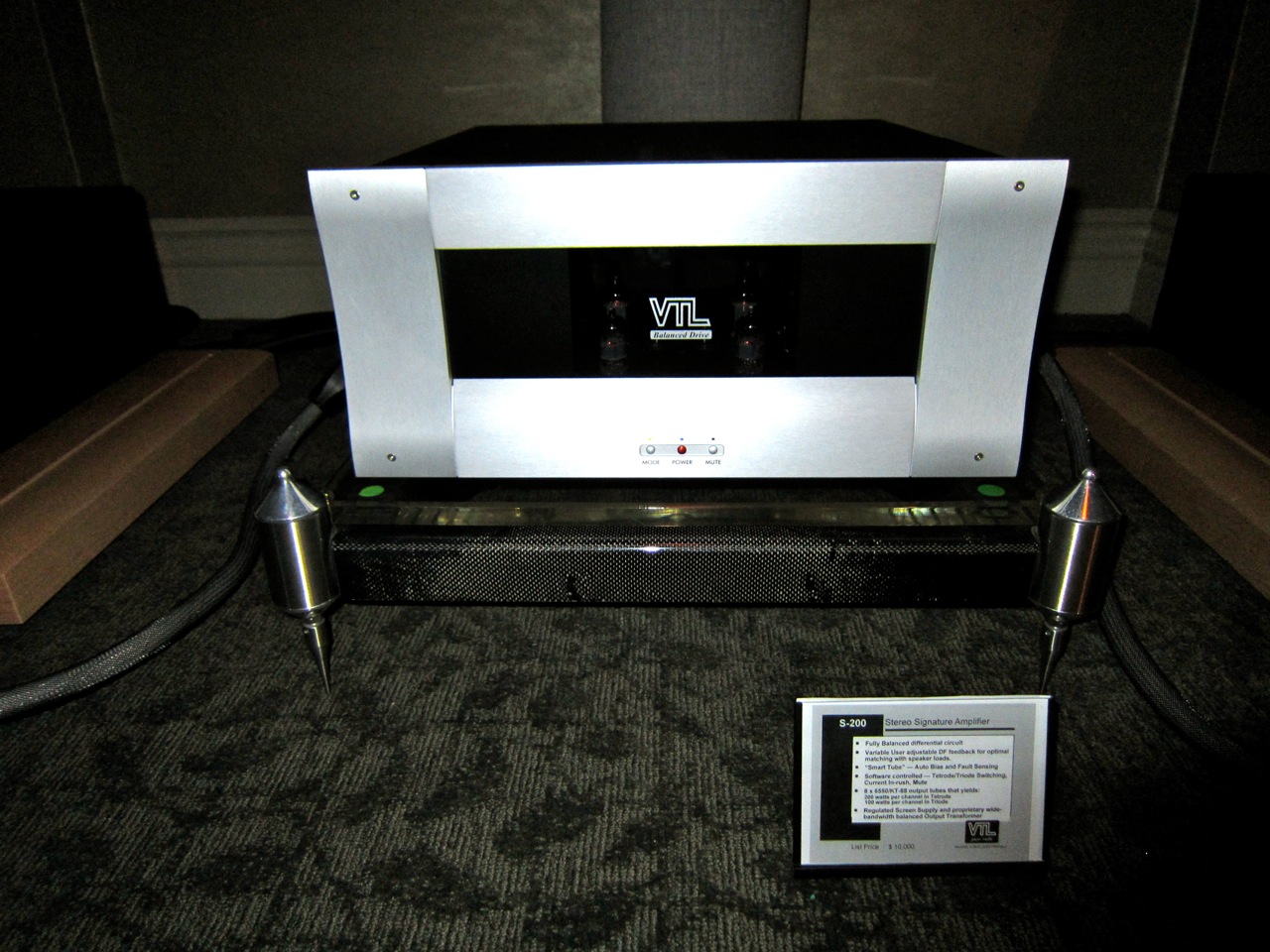 With the S-200 engaged, this system produced the best sound I have heard from the Giya loudspeaker at a show, with beautiful timbre, broad and deep soundstaging, and exceptional clarity on transients on material ranging from The Tape Project’s Nat King Cole release to Peter McGrath’s 1979 recording of Schubert’s B-flat Major Piano Sonata played from a MacBook Pro into the wonderful dCS “Vivaldi” DAC. There’s no doubt in my mind that the VTL S-200 Stereo Signature made quite an auspicious debut.

Another speaker on static display in Munich, made its first public sonic premier in the US at the California Audio Show. The Sonus faber Olympica I ($6500, or $7700 with stands) is a two-way bookshelf speaker with completely new drivers designed from the ground up by the company’s engineering team, but benefiting from technology derived from the development of its flagship Aida loudspeaker. Newly developed die-cast baskets on the 6” midrange/woofer and a 1” silk-dome tweeter improve rigidity without impacting the speaker’s lovely timbre and transparency. The Olympica I features a beautiful solid walnut wood and leather enclosure in a new asymmetrical shape that eliminates parallel surfaces, and accommodates a new bass-reflex system developed for the Olympica series. In what we’ve come to expect from this Italian manufacturer, this is one drop-dead gorgeous speaker. 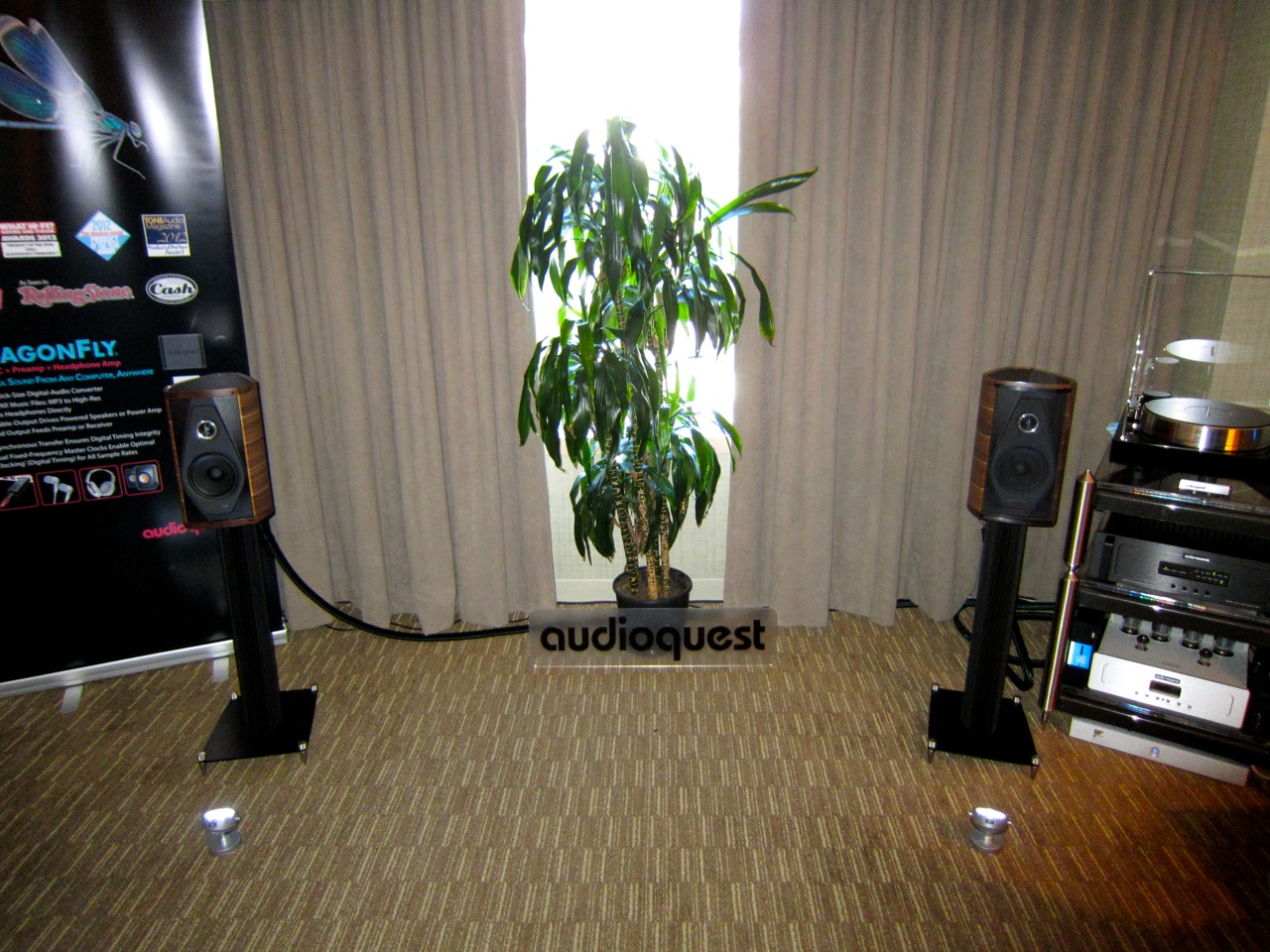 The good news is that the Olympica I’s sound matches its stunning looks. In a system with an Audio Research VSi75 integrated and DAC8, a Pro-Ject Phono Box RS and Xtension 10 ‘table (with Sumiko Blackbird cartridge), and Audioquest cables, it displayed excellent coherence and seemingly disappeared with a soundstage extending beyond the boundary of the speakers. While its rated low frequency response is 50 Hz, this baby seemed to extend lower. Like the Amati futura I happily lived with for quite some time, this smaller Sonus faber model also appears to like power, yet it can be driven with as little as 40 Watts. Seems like good things do come in small packages! 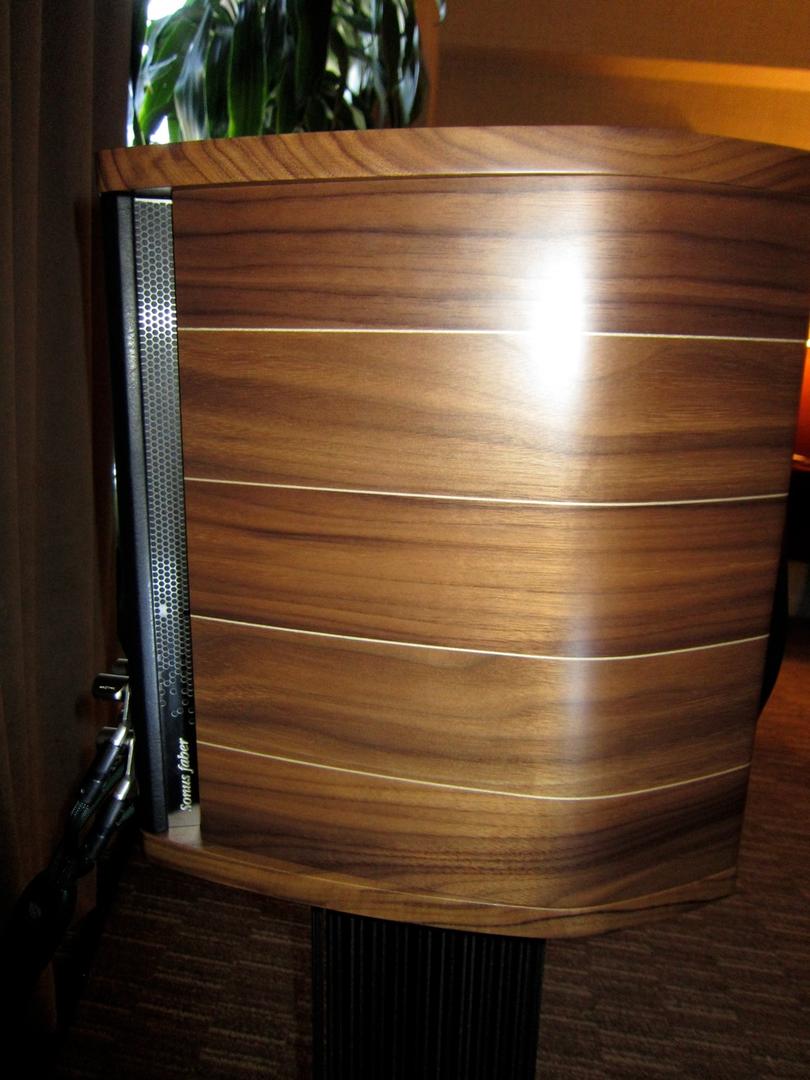 Tom Petty and the Heartbreakers: Mojo