Headphones have attracted increased interest in the past decade, spurred on by a number of factors including the transition of music to computer-based storage (iPods, laptops and desktops) and the expansion of open-plan office designs. And while headphones have always been capable of very high fidelity, an expanding market has brought forth new models and new electronics to support these new models. The variety of headphone amplifiers now available in today’s market rival and may even exceed the number of high-quality headphone models. Recognizing the choices now available, I wanted to bring readers a look at one of the top-tier competitors in the headphone amplifier space, the Woo Audio WA22.

About Woo Audio and the WA22

Founded by Jack Wu, Woo Audio is a New York based firm that focuses on building high performance headphone amplifiers (all of which are vacuum tube-powered designs), along with headphone related accessories. Woo headphone amps start at $495 and range on up to $4990. Following a business model that is fairly commonly seen in the headphone world, Woo is not only a manufacturer but also a reseller for three select brands of headphones: Beyerdynamic, Grado, and Stax.

Typically, Woo amps are sold factory direct on a build-to-order basis, so that customers have the option of buying standard-version Woo models or of having their new amps factory “hot-rodded” with various extra-cost tube upgrade options. The WA22 amp ($1900 in standard form, or up to $2450 with every available tube upgrade) is a fully balanced, transformer-coupled headphone amplifier that is–in terms of price–positioned at an upper-middle point within Woo’s impressive nine-model amplifier lineup. As you can well imagine, these guys eat, sleep, and breathe high-end headphone amplifier designs.

For those of you unfamiliar with the modern high-end headphone marketplace, some of the players like Woo Audio may be unfamiliar so that some context may prove helpful. 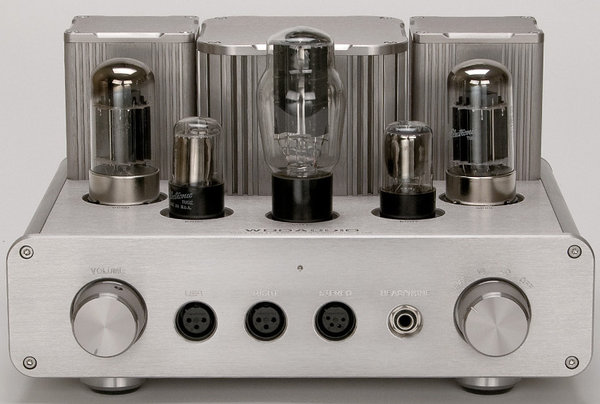 Any list of modern headphone makers would include familiar names such as AKG, Audio-Technica, Beyerdynamic, Denon, Grado, Sennheiser, Stax, and Ultrasone, along with a smaller group of relative newcomers such as Audeze and HiFiMan. When we work back up the signal chain to look at high performance headphone amplifier makers, however, a mostly new group of companies emerges. While some brand names will no doubt be familiar to traditional high-end audiophiles (e.g., Grado), there are many key players in the high-end

headphone universe who are less well known to traditional audiophiles. I’m thinking, here, of manufacturers such as Apex (TTVJ), Blossom Audio, Burson Audio, Darkvoice, Headroom, Meier Audio, Ray Samuels Audio, and Woo Audio. And to be frank, even this brief list is only scratching the surface, my point being that headphone electronics are a different world entirely than conventional audio electronics.

There are other differences between headphone amplifiers and amplifiers in the traditional audio realm. These are worth reviewing because they set the stage for the potential contentious remarks to come later.

First off, it is important to understand that many of the accepted truisms regarding tube-type power amplifiers vis-à-vis loudspeakers no longer apply when we talk about using tube-type headphone amps—such as the WA22—to power typical headphones. For example, it is common knowledge among audiophiles that tube-type power amps can give “interesting” (and in some cases downright problematic) results when interfaced with certain loudspeakers, largely because various tube-amp-output-impedance-to-speaker-input-impedance matching issues can arise. These issues are compounded by the fact that speakers typically do not exhibit flat impedance curves, meaning that impedance matching problems may occur at some audio frequencies, but not at others.

But unlike loudspeakers, headphones usually do have very flat impedance curves and they offer benign and relatively high-impedance, tube-friendly loads (30-300 ohm loads are typical for headphones, rather than the 4-8 ohm loads typically seen with loudspeakers). In practice this means that for the most part impedance matching issues between tube-type headphone amps and headphones don’t come into play—at least not to the dramatic degree that they do between tube-type power amps and speakers. (If one wants an analogy to traditional full-size audio system, it is probably better to think of headphone amps as behaving more like preamplifiers than like power amps.). The bottom line, then, is that many headphone aficionados regard tube-type amps as the solution of choice for powering almost all kinds of high-quality headphones. 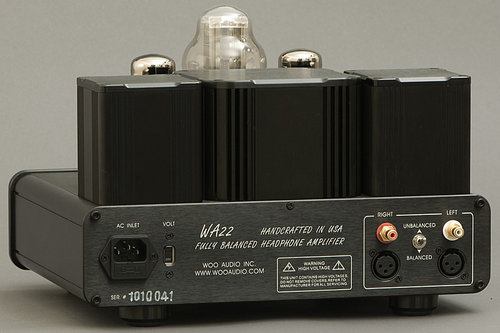 Second, it is important to bear in mind that headphones behave much differently than speakers do, from the listener’s point of view. In particular, the performance of speaker-based audio systems is governed—or at least heavily influenced—by the speaker-room interface. But for obvious reasons, the “speaker-room interface” isn’t part of the deal in headphones. My experience in reviewing many headphones is that the absence of room interface issues makes frequency response errors and distortions in headphone-based systems much easier to identify and to focus on. This is fine up to a point, but it also exposes one of the

potential limitations of headphone-based systems; namely, the fact that you can’t compensate for problems by tweaking room-related variables as you can with speaker-based audio systems (for example, there really are no headphone equivalents for changing speaker placement within the listening room, or for applying room surface treatments or resonance control devices). But two things you can control are the electronics and signal cables you will use in powering your headphones. Since those are essentially the only variables at your fingertips, it becomes easy to understand the heightened role the amplifier plays in any headphone-based system.

Which leads to a final distinctive point about headphone audiophilia. Experienced headphone listeners are often more at peace than traditional audiophiles are with the idea of using components with offsetting and complementary strengths to achieve optimal sound (perhaps the sonic equivalent of the notion that “two wrongs can make a right”). I find that many traditional audiophiles want to believe that each piece of equipment in their systems is very close to perfect. As a result, their mental model for improving music reproduction then involves reducing small, residual system imperfections one-by-one, but with a somewhat Wizard-of-Oz-like denial that error compensation and synergy is part of the package.

Headphone aficionados, on the other hand, are somewhat more willing to mix-and-match complementary components with an eye toward achieving a well-balanced result. Thus, one might hear a headphone enthusiast say something like this: “the Sennheiser HD 800 has an upper mid-range dip which is nicely enlivened by the Meier Corda HA-2.” I think this philosophical difference is helped along by two factors. First, because the room is removed from the

equation, listeners’ experiences with a given headphone are likely to be similar (though not necessarily exactly alike), and second, it is harder to argue that problems aren’t problems. Adding to this, there are far fewer manufacturers of top-tier headphones than of top-tier loudspeakers, so that more people can hear more of the field. This leads to some convergence in the discussion. Finally, headphone lovers may not be influenced by the biases, strictures and unspoken “rules” of purist-grade high-end audio, and may therefore be more open to unorthodox methodologies as they pursue top-tier sound.

All of the above serves as a necessary preamble to my remarks about the Woo Audio WA22, because, quite frankly, I am going to talk about how this delightful amplifier “enhances” the sound of most headphones (which is precisely the kind of talk that isn’t allowed in polite but hide-bound high-end audio circles). 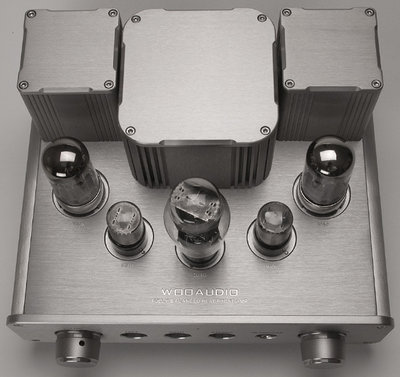 As I mentioned above, the WA22 is an all-tube headphone amplifier that offers a fully balanced design (it accepts balanced inputs and can drive balanced headphones) with Class-A push pull topology. The output transformers are hand wound using a special winding approach, and two output impedances are offered via a selector switch on the front panel. Woo offers multiple tube options, with hot-rod versions using selected 6SN7 driver tubes and 7236 power tubes. The base model is $1900 and the maximum supreme tube version is $2450. Beauty is in the eye of the beholder, but I simply loved the design, especially at night.

A description of the sound of the Woo sounds like an audiophile rave checklist. It is transparent, particularly in that you don’t notice any treble veiling or grit as you do with some lesser headphone amps. Bass is solid, well defined and can be very deep with the right headphones. Tonal balance is very, very good, with no sense of treble roll-off or brightness.

This is one of those difficult-to-review products because it is hard to find deficiencies. Perhaps there is an even better headphone amp, and I’ll be back to explain problems with the Woo. Perhaps as D/A converters get better, distortions in the WA22 will be revealed. But right now, these problems are below the error noise floor in most cases. Maybe even more important, the errors in headphones are much, much greater than any you’ll find in the WA22. 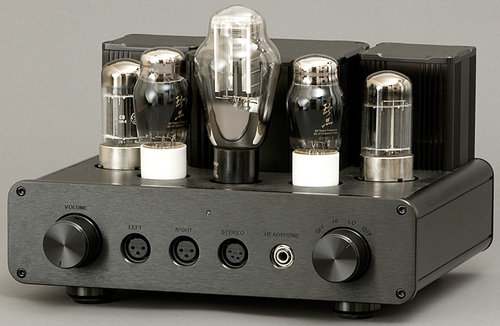 I tested the Woo with a wide variety of headphones, including the Sennheiser HD800 and HD650, the Grado PS1000 and 325is, the Ultrasone Edition 8 and the Denon AH-D5000. This is where things got interesting. In 90% of these cases, I thought the mid-range was slightly more present and vivid with the WA22 than with the other headphone amps I had on hand. The effect I’m talking about doesn’t sound like a frequency response bump, but rather like an increase in midrange contrast (the analogy here is to images, where contrast is a separate factor from color or resolution). Another way of expressing this is to say that micro- and macro-dynamics in the mid-range were slightly better with the WA22 than in other top-tier headphone amps I’ve heard thus far. This generally made each headphone sound more realistic and more like live music.

This quality of more realistic mid-range contrast was one I observed with the WA22 across many, but not all, of the headphones I tried. So while my reactions to the WA22 were extremely favorable, I must in fairness say “your mileage may vary,” because you may not be using any of the headphones I tried, and because the ‘phones you choose might conceivably behave differently than the test ‘phones I used. I should also add that once you settle on a specific set of headphones, there could be other amplifiers that address specific performance issues with your headphones better than the Woo does. But if you are looking for an amp that will make most of the headphones you try shine, I can and do highly recommend Woo Audio’s WA22.