Real-world audiophiles understand that the pursuit of good sound, like most things in life, involves compromise. Those loudspeakers that you absolutely must have necessarily inform your choice of electronics; the dimensions of the room they’ll live in drive other decisions. Issues of cost, reliability, appearance—these metrics, and others, are in play as an audiophile moves toward his or her idea of sonic nirvana. As much as any product I’ve come across, the Wilson Audio Specialties TuneTot “ecosystem” (as the manufacturer rather grandly refers to the speakers plus the several à la carte options that can be purchased to accompany them) address the transactional nature of this hobby—the deals we make with ourselves and the forbearing souls with whom we share our domestic spaces.

TuneTot, the smallest and least expensive loudspeaker Wilson makes, is a sculpted box that’s 8.61″ wide, 14.83″ high, and 10.19″ deep. Each speaker weighs in at 29 pounds. The retail price is $9800 or $10,500 per pair, depending on the color selected (the five options available are new to Wilson’s repertoire of standard finishes). TuneTot’s cabinet is fabricated from two of Wilson’s proprietary composites, the X- and S-materials, and the enclosure is asymmetric, assuring that no two internal surfaces are parallel. The TuneTot is a two-way with a 1″ doped silk fabric tweeter in a sealed sub-enclosure and a 5.75″ paper pulp woofer that’s vented to the rear with a slot-shaped port. The speaker is designed for placement close to a room boundary—on a bookshelf, a piece of furniture, or some other architectural element such as a mantel. Mounting the TuneTot on stands (as with the Duette Series 2s, another Wilson product conceived with near-boundary siting in mind) is discouraged. Wilson favors ported designs and having a port so close to the wall behind the speaker could make for problematic low-frequency performance. Accordingly, a pair of foam plugs is supplied with each set of TuneTots to control potentially boomy, diffuse bass. I tried the TuneTots in two locations—on top of an oak china cabinet in our living room, a large space contiguous with the kitchen and hallway in our recent-construction condo, and also on a heavy wooden buffet in the 12.5′ x 14′ dining room. In both instances, bass reproduction was significantly more articulate with the port-plugs inserted.

Wilson loudspeakers have always been designed to optimize the time domain behavior of multiple drivers, and Daryl Wilson has continued this tradition with a clever system of long (adjustable) and short (nonadjustable) spikes that screw into the bottom of each TuneTot. They can be changed in position (front vs. rear) to vary the tilt, the goal being that the top surface of the loudspeaker is just visible from the listening position. The top of the china cabinet was 47″ above the floor and the long spikes were employed at the back of the speaker. In the dining room, atop the buffet and 37″ above the floor, it was necessary to have the long spikes in front. Dimpled metal pads are supplied to accept the spikes and protect the surface beneath the speakers. Many, if not most users will place the loudspeakers on a wooden shelf, desktop, or some other piece of furniture with significant resonant properties. To deal with these resonances, for $2100 per pair, Wilson has the ISOBase, a platform composed of constrained layers of several materials. The upper surface of the ISOBase has slots to receive the spikes attached to the bottom of the TuneTot. Although the top surface of my china cabinet is substantial, improvements in imaging, detail retrieval, and bass definition were immediately apparent with the ISOBase in place. 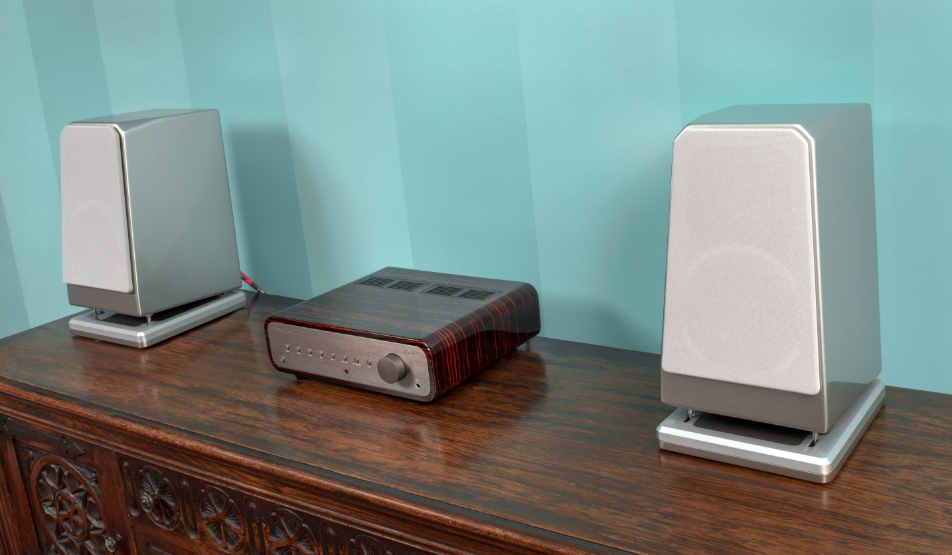 In addition to the horizontally oriented slot port, the rear panel sports a single pair of robust five-way binding posts, helpfully angled upwards. Above the posts and port is an aluminum plate held in place by four Allen bolts. Removing the bolts gives one access to a resistor assembly that provides fuse-like protection of the tweeter as well as level-matching between the two drivers. Very occasionally, the TuneTot’s user manual explains, there can be issues with tonal balance and a “resistor fine-tuning kit” is available at Wilson’s online store.

As far as appearance goes, the TuneTots will score some points in an audiophile’s campaign to gain admission for them to a thoughtfully finished and furnished space. It’s fair to say the larger a Wilson speaker is, the more, ah, aggressive its visual impression is to a non-audiophile. Just by virtue of its scale, the smallest Wilson is almost demure, especially as it will be placed near a wall, and it’s helpful as well that there are options for paint and hardware color. Grilles are not standard but are available in six fabric colors; they attach quite tightly to the front frame of the loudspeaker via four metal pins. As is generally the case, the grilles are not completely acoustically transparent and many critical listeners will want to do without them. If you’re going grille-less, Wilson will sell you a pair of aluminum rings to cover the woofer’s mounting screws in one of four anodized colors. I’m not convinced that the aesthetically inclined member of your domestic dyad will be overly impressed with the alleged improvement in appearance—especially as the rings cost $649 per pair, as opposed to $299 for a set of grilles. Quit while you’re ahead, guys. You got the speakers into the living room.

I powered the TuneTots with a half dozen amplifiers that varied widely in design, cost, and looks. These included a large tube integrated, the awesome Angstrom Stella, as well as a trio of well-regarded solid-state power amps, a Bel Canto evo 6, my trusty Pass Aleph 0s, and a Parasound A23. I also tried out two integrated amplifiers that include their own quality DACs and also happen to be exceptionally appealing from a visual standpoint—the elegantly minimalist Devialet Expert 130 and Peachtree’s organic-looking Nova 150, a steal at $1600—components that will pass the same dress code that the TuneTots are held to. The source in all instances was an Oppo 103 universal player, providing either analog output directly to the power amplifiers or a digital datastream to the Peachtree and Devialet models. None of these components embarrassed themselves, but their performance did range from solidly competent (the $999 Parasound) to magnificent (the $24,600 Stella, which drove the TuneTots with 100Wpc of Class A power.) One thing was apparent: The TuneTots are not an “easy” load and will respond to an amplifier with beefy power supplies that can control the diminutive woofers as firmly as possible. With the Angstrom, Bel Canto, and Pass electronics, the exceptionally well-recorded bass and drums on the Japanese XRCD version of Kevyn Lettau’s Songs of the Police had satisfying impact, if not the heft and extension experienced with big floorstanders. Well, duh. Nobody, of course, should expect lifelike dynamics and gut-wrenching bass from a little two-way. The point is that the TuneTots will take advantage of the best possible electronics placed before them in the reproduction chain and, driven to surprisingly high levels, won’t mess up a good thing. As the audio cliché goes, their sins are sins of omission.

With other sonic parameters, the TuneTot’s character will be familiar to those who know the sound of their brethren. The very top of the frequency spectrum is slightly softened but pristine and airy. On the 2010 Haitink/Concertgebouw RCO Live recording of Shostakovich’s Symphony No. 15, the glockenspiel notes that begin the piece have focus and precisely defined attack. When a lower-pitched bell note sounds later in the movement, it’s clear that the metal bar the percussionist is striking is a bigger than the one that was initially heard. The swoops, bleeps, fizzies, and other high-pitched electronica that decorate The Bird and the Bee’s otherwise respectful treatment of Hall and Oates songs [Blue Note Records] seems to arise naturally from the musical content below. Overall, the tonal character of voices and instruments was richly represented. I found this to be true not just with my usual Stradivarius vs. Guarneri violin comparisons but also on the splendidly recorded Tone Poems disc that has David Grisman and Tony Rice playing 17 different pairs of classic mandolins and guitars. The TuneTots do an excellent job of revealing the subtle distinctions among fine instruments.

Given the firm near-wall placement recommendation, I was pleasantly surprised by the spatiality the TuneTots were capable of. A good example was an older Telarc recording of Rachmaninov’s Symphonic Dances from David Zinman and the Baltimore Symphony Orchestra. The sense of a large ensemble playing in a large space came across well, especially when a silence followed a loud orchestral exclamation. The impression that the solo alto saxophone was positioned behind the large string section was quite convincing.

These small transducers weren’t thrown by complex material. With the high-octane arrangements on Lyle Lovett and His Large Band, a sustained organ note deep in the mix was easily discernable. Likewise, all the subtleties of the orchestrations for Tchaikovsky’s Piano Concerto No. 1, featuring soloist Olga Kern on a Harmonia Mundi SACD, were there to savor through the TuneTots. Sure, if your musical taste runs to solo piano, small group jazz, folk, and chamber music, the TuneTots are less likely to disappoint. But you won’t necessarily feel the need to steer clear of power music with these smallest Wilsons.

The potential for the TuneTots to excel in a true near-field application seemed obvious, and I experimented with a setup that approximated having the loudspeakers on a desktop in, say, a home office. At this closer distance, issues of dynamics and low-end weight receded further and my involvement with music of all stripes was profound.

At the end of the review period I took the forbidden path of actually putting the TuneTots on stands, positioned out in the room like a typical mini-monitor. I brought the ’Tots to my usual 15′ x 15′ listening room and placed them on the only stands I had on hand, a pair of 36″ sand-filled Pangeas. I sat on a pillow to get my ears to the Wilson-sanctioned height. With Songs of the Police, the baby Wilsons sounded great—clear and uncolored, with plenty of quality bass (having the foam port-plugs inserted was still the preferred way to listen.) With symphonic music, though, there seemed to be a flattened sonic perspective and less detail. On the basis of this limited experience, I must conclude that the TuneTots will indeed perform at their best when used as the manufacturer recommends.

The TuneTot will undoubtedly become a top loudspeaker choice for the well-heeled music lover who inhabits a small apartment, or perhaps deployed in the living room of that individual’s upscale beach house. But many ’Tots, I suspect, will be purchased by audiophiles who already own larger Wilson loudspeakers and are devoted to the company’s sonic philosophy and superior manufacturing standards.

It’s fitting that the TuneTot came to market when it did. During the time I was getting to know the speaker, David A. Wilson passed away. Wilson Audio Specialties was born when Dave Wilson needed a near-field monitor for his own recording projects—that loudspeaker became the WATT, Wilson’s first commercial product. Forty years later, the company has introduced another loudspeaker intended to deal with a specific situational challenge. Whether or not the TuneTot is what you need for your listening environment, to address your particular set of audio compromises, there can be no denying that this deeply considered and versatile speaker achieves what it sets out to do.