When Sign o’ the Times came out in 1987, Prince was sitting on top of the recording world. Released between 1978 and 1981, his first four albums helped pave the path to superstardom. The transformation into a major pop star occurred with 1999 (1982) and Purple Rain (1984). Though not as well received, 1985’s Around the World in a Day did little to dampen the public’s enthusiasm for the genre-bending artist, and 1986’s Parade was recognized as a return to form. The follow-up, Sign o’ the Times, cracked the top ten, went platinum, and delivered the top-ten singles “Sign o’ the Times,” “U Got the Look,” and “I Could Never Take the Place of Your Man.” The new album was also a critical success, topping the Village Voice Pazz & Jop poll for that year.

And looking back, it’s clear that Sign o’ the Times was one of the quintessential albums of the 1980s. If you went to clubs, you danced to its singles. If you watched MTV, you saw the videos. And, on both pop and R&B stations, you heard it on the radio. Because the album captures a pop icon in peak form, it seemed inevitable that an expanded edition of the record would appear, and the new Warner/Rhino box sets pull out all the stops, with options that include a 13-LP/1-DVD or 8-CD/1-DVD box set. (More modest options include a reissue of the original album; everything was remastered by Bernie Grundman, Prince’s original mastering engineer.) As you’d assume, the super deluxe editions aren’t cheap—nearly three hundred bills for the vinyl version and slightly more than half that for the silver discs. Let’s assume, though, that money’s not an issue. Would it be worth your time to explore more than ten hours of music? Having taken the plunge, I can cite three good reasons for taking the plunge: the strength of the original album, the riches buried inside the vaults, and recordings of two live concerts from the tour that followed the release of the album. 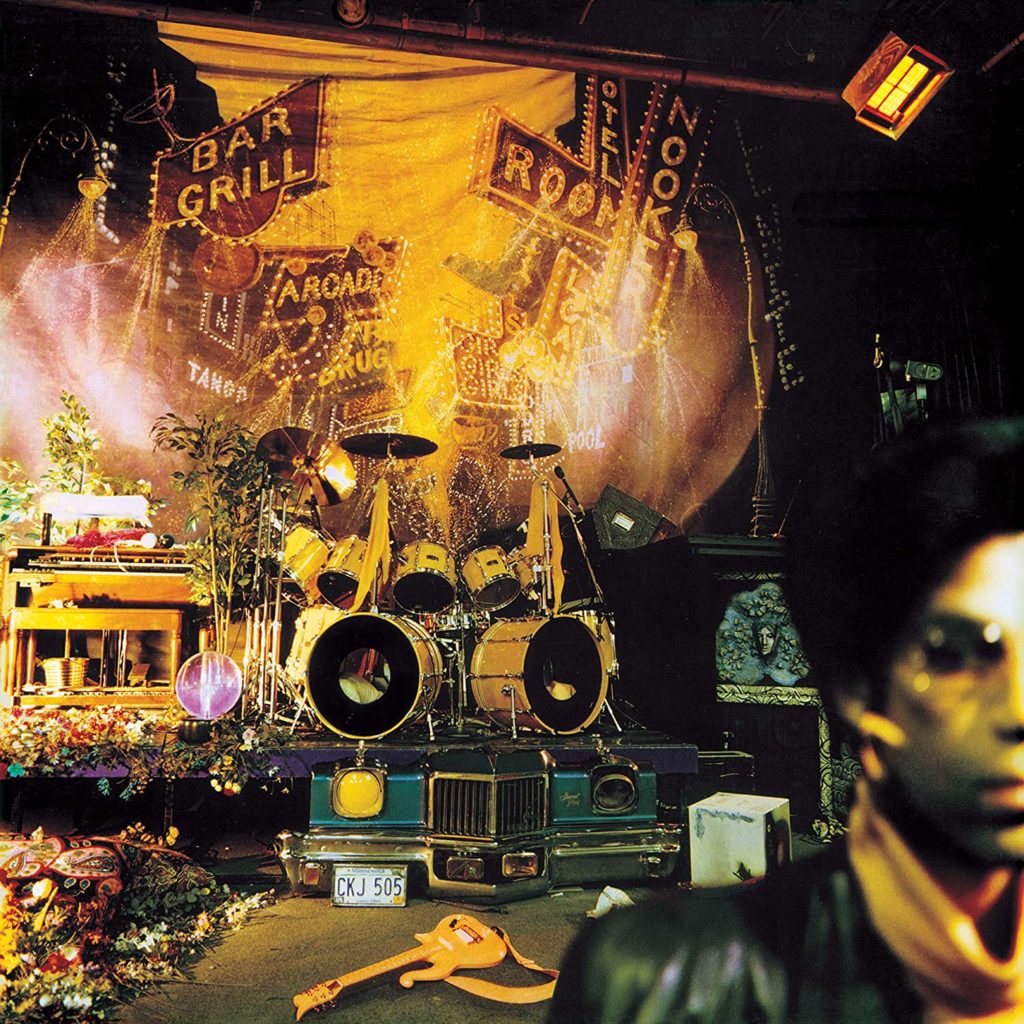 Sign o’ the Times was a hit when it came out, and the original 2-LP set has held up well. It features a classic Prince sound that has more in common with 1999 and Purple Rain than the two albums preceding it. And even though much of the album is virtually a one-man show, with Prince relying heavily on a Linn LM-1 drum machine and a Fairlight CMI digital sampler, the music sounds festive, due in part to various guest vocalists, including Sheena Easton ( “U Got the Look”) and “Camille,” which was Prince’s moniker for his electronically-altered vocals. The album doesn’t lack in energy, with upbeat cuts like “U Got the Look,” “Heartbeat,” and “Hot Thing” among the most danceable cuts of 1987. And yes, Prince could still be counted on to pen lyrics both kinky and bizarre, examples being “If I Was Your Girlfriend” and “Ballad of Dorothy Parker.” (And no, he’s not talking about the Dorothy Parker of literary fame. He just liked the name.)

The record wasn’t all fun and games, however. Voted the best single of 1987 by The Village Voice, the title/opening track addresses AIDS, crack, street gangs, starvation, poverty, the threat of nuclear war, and other issues—and does so while delivering what may be the nastiest groove Prince ever laid down. The focus turns spiritual on “The Cross,” where sitar-sounding licks enhance the mystic mood. The deluxe edition box sets also include a plethora of Sign o’ the Times-connected mixes, remixes, and edits originally designed for 7″ and 12″ singles.

A deluxe edition was also in order because this is a situation where you’d really want to dig through the vaults. Artistically Prince was in a state of flux during the period leading up to Sign o’ the Times. Along with disbanding the Revolution, he started and shelved three projects, including a triple album that, due to resistance from Warner Bros., was ultimately whittled down to two platters. So the deluxe edition offers an opportunity to examine some of the missing pieces, and in all the super deluxe editions contain 45 previously unreleased studio recordings. Lucid and informative liner notes accompanying a 120-page hardback book provide much-needed context to those tracks. The liner notes also elucidate the contributions by Wendy and Lisa—and the trust that Prince had in those musicians.

With the exception of a version of “I Could Never Take the Place of Your Man” that was put to tape in 1979, the music on the “Vault Tracks” segment of the deluxe edition was recorded between 1985 and early 1987. These songs are all over the place musically. Clocking in at over 12 minutes, “Soul Psychodelicide” is a wild funk jam that never lets up; “Rebirth of the Flesh” slams just as hard and carries it with it the same P-Funk vibe. At the same time, the vault tracks contain some quiet moments, including “Visions,” which Lisa improvised on acoustic piano. There are some catchy, light-hearted pop songs with quirky lyrics, but Prince also goes big picture at times, as on “Cosmic Day” and “Walkin’ in Glory.” Ultimately, the vault tracks contain such a wild mix of music I almost wish this collection of songs had been released as its own album, even more overstuffed and unpredictable and impossible to pin down than—well, you know what record started that tradition back in 1968.

Finally, the deluxe edition offers two full-length concert recordings where Prince fronts his new Lovesexy band, and these recordings are anything but filler. Prince didn’t tour America after Sign o’ the Times, instead retreating to the recording studio after a 34-date European tour. As a result, the live recordings on this deluxe edition allow fans from the States to see what they missed. It’s nice to have both the audio-only disc (a June 20, 1987 performance in Utrecht, Netherlands) and the DVD (an intimate New Year’s Eve show at Paisley Park—the one American venue where Prince actually did perform, to an intimate and very lucky audience). The Paisley Park performance is longer and, by the end, that much looser and wilder than the Utrecht show, which is saying something for a Prince concert. There’s a lot of overlap between the two shows, including such million-selling hits from previous albums as “Kiss,” “When Doves Cry,” “Let’s Go Crazy,” “1999,” and (in truncated form) “Little Red Corvette.” It says something about the new material that the Sign o’ the Times tunes hold up well against earlier hits.

In both concerts Prince has opportunities to stretch out on guitar, and although that was probably skill set #15 for the overachiever, he was an excellent guitarist. Highlights of both shows include “Hot Thing,” which may not be the most profound song ever written, but it sure is funky, with witty lyrics to boot. During the Paisley Park performance, it’s nice to see him plunge into soul ballads like “Do Me, Baby,” “If I Was Your Man,” and “Purple Rain.” They all receive tender readings, and when you watch him perform those songs, you really sense the lineage he shares with old-school R&B singers. The influence of James Brown permeates “Housequake” and the lengthy Paisley Park encore, where the horns even quote from “Papa’s Got A Brand New Bag” and Prince borrows a stunt or two from JB’s stage show (the cover of Aretha’s “Chain of Fools” also smokes). During this period, rumors of a project teaming Miles Davis and Prince surfaced, and the cameo by Miles while the band riffs on “It’s Gonna Be A Beautiful Night” suggests that collaboration would have been successful, as their late-night jam sounds quite similar to the music Miles was playing around that time.

These live performances also offer proof positive that Prince knew how to whip a band into shape. Because Prince played most of the instruments on Sign o’ the Times, everyone in the newly-formed Lovesey—a combination of ex-Revolution members and new players—needed to learn the new material from scratch, and quickly. The 11-piece group, complete with a horn section and background singers/dancers, really gels, breathing new life into both old and new material. Along with adding additional star power, Sheila E. knows how to galvanize a band from behind the drum set—and when Prince takes over the drumming duties on “It’s Gonna Be A Beautiful Night” medley while Sheila does a little rapping, it’s one of the highlights of the show.

To touch on one other thing: When you watch the Paisley Park DVD, you can see the joy the supporting members of Lovesexy felt while playing Prince’s music. Those smiles weren’t pasted on, and it’s easy to understand why the musicians looked so happy. After all, they were welcoming in the New Year with one of the baddest dudes around. Wouldn’t that bring a smile to your face?