The perfect system doesn’t exist. I think that’s the best part of this hobby: There is no single absolutely flawless system that will please every single ear in existence. And even the best systems have room to change and grow. Tastes vary and range as much as the human condition allows, and it allows for a whole lot.

But there are systems that are just plain good, especially when put into a pure cost/benefit equation. They’re good in most contexts and to most listeners. This isn’t lowest-common-denominator stuff; this is just genuinely solid versatile sound. Which brings me to the subject of this review: the new QUAD Vena II integrated amplifier ($1395 with case) paired with the new Wharfedale Linton Heritage loudspeakers ($1498/pair with stands; $1198 without).

This was an easy review to get excited about. I have a well-documented love for Wharfedale and I’ve always been interested in what QUAD puts out, so getting to test them together sounded like the perfect situation, at least for me. And I have to say, without spoiling the whole review, that I was very right to feel that way.

To start out, I had to acquaint myself with the QUAD Vena II. It’s small and gray with a matte finish, though the optional case adds a very nice gloss. (I recommend springing for it; mine came in the piano black finish, and it’s very attractive.) The Vena II is rated 45Wpc into 8 ohms, which is generally plenty for most speakers. It also includes a phono section, two analog inputs, a pre-out, and a plethora of digital inputs. For me, it strikes the perfect balance between classic analog inputs and modern digital capabilities. There’s even Bluetooth streaming with aptX support. For a traditional British brand, the Vena II is exceedingly modern in both aesthetics and flexibility. 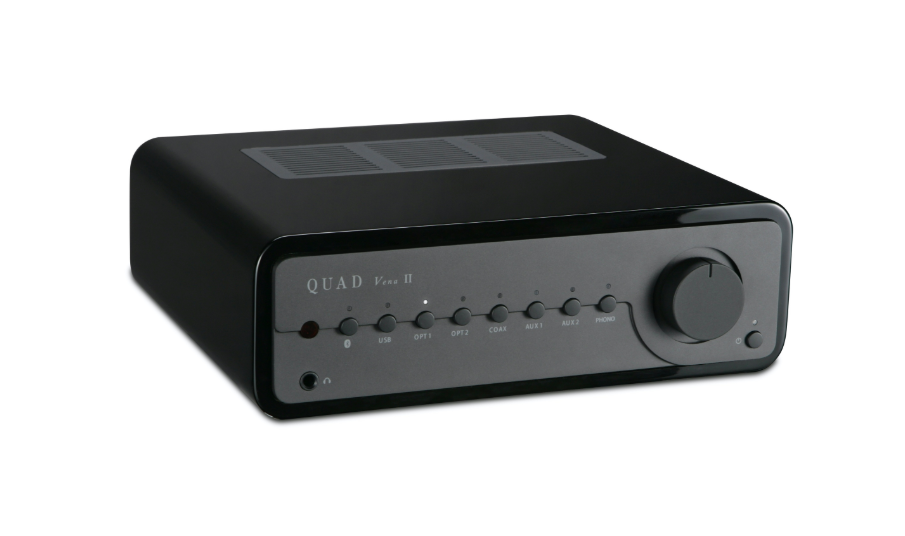 While I do love the more modern design of the Vena II, I have to admit that I fell very much in love with the Wharfedale Linton Heritage speakers and their gorgeous optional stands. To be fair though, the Lintons are right up my design alley, playing with traditional hi-fi style but updating it with modern components. The Linton is a three-way bass-reflex design with a 1″ soft-dome tweeter, a 5″ woven-Kevlar midrange, and an 8″ woven-Kevlar woofer. The speaker is rated at 90dB sensitivity with a nominal impedance of 6 ohms, and Wharfedale recommends amplifiers rated from 25–200Wpc. That means the Vena II fit the Linton Heritage very nicely, at least in power.

My review pair of Lintons came with the optional stands, which I highly recommend. I won’t write much more about them, but I will say this: They’re beautiful and functional. They come with space for a bunch of LPs and heighten the entire aesthetic of the Lintons, while acting as very solid anchors. They’re not the heaviest stands I’ve used, but they’re more than substantial enough, especially when loaded with records. If you get the Lintons, get the stands as well.

When setting this little system up, I kept thinking about synergy. It’s such a vague word, almost rendered useless by marketing firms. Still, this little system screams out synergy as soon as I start thinking about it. Both companies are British brands with deep roots, and both components are sleek, living-room-worthy objects that offer classic features updated with today’s technology. Before I even put on a record or started streaming, they just felt right together.

Setup was a breeze. I dropped the Vena II on the bottom of my equipment rack, carefully put the Linton Heritage stands in place, set the speakers down on top of them, and plugged everything in. I was up and streaming in a matter of minutes. One feature that I instantly liked about the Vena II was how the volume control automatically turned down at startup. It’s a clever way to avoid any potentially damaging transients getting to the speakers, and I appreciated that. I also liked the Vena II’s little remote. While simple, it was a nice piece of metal-on-plastic that controlled volume, switched between sources, powered on and off, and controlled the mute function. That’s exactly what I want from a remote control. Everything about the Vena II was familiar and easy, just the way I like it.

I started my study in synergy with my new obsession: dead guy jazz. I know I’m a little late to that party, but I just started down the Blue Note rabbit hole and haven’t been able to climb out yet. Fortunately, it’s a deep and fantastic place to visit, especially with today’s modern Tone Poet reissues coming out fast and strong. I listened to Tone Poet’s Wayne Shorter release Etcetera, using the Vena II’s moving-magnet phono section. The combination of Linton/Vena II made for an engaging and surprisingly complex listen. Shorter’s lilting solo on the title track came out as dynamic and varied. I could almost feel his breath vibrating the brass, while Joe Chambers kept a deep, solid pace on drums.

I expected the Lintons to feel a little anemic in the bass and treble, but I was absolutely wrong. The drums were easy and flowing and impactful, while the cymbals never crossed over into a hazy, splattery sheen. Chamber’s solo on the same track is focused and hits hard, especially those snares, although I did sense a little bit of grain on the harder cymbal hits. Still, I only had these thoughts after a couple listens. Initially, it was pure pleasure from needle drop to deadwax. The Linton/Vena II combo was instantly easy to enjoy. 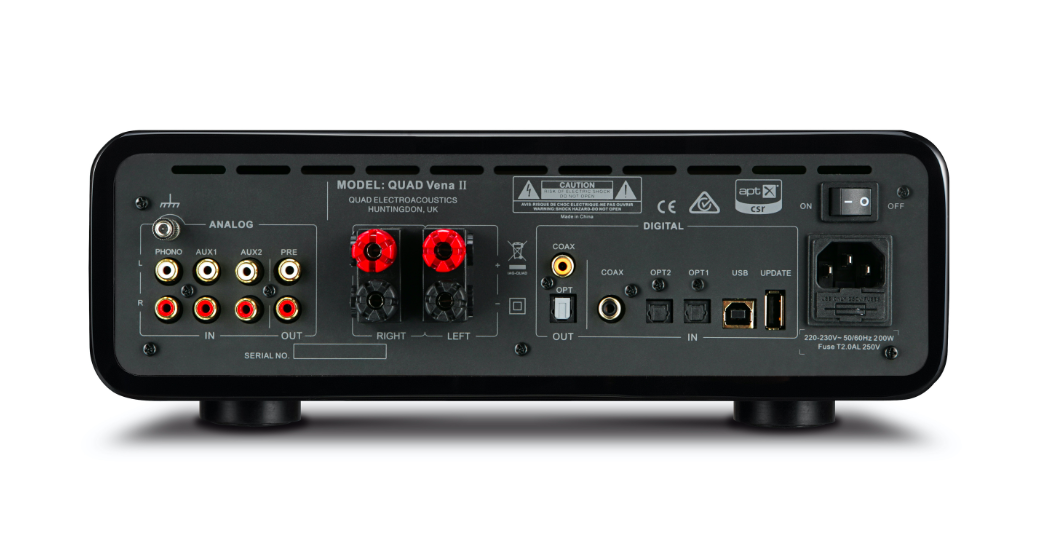 Speaking of drums and ease of enjoyment, I decide to test rhythm and pacing with a fantastic release from the unparalleled label, Colemine Records. Kings Left Behind by Ikebe Shakedown is a killer instrumental funk record with smooth grooves from start to finish. The first track “Not Another Drop” features a beyond-fantastic buildup toward the concluding passage, the drums and the conga working together in a feverish rhythm, culminating in a soaring horn solo. The Linton/Vena II combo kept me perfectly dialed in through the Linton’s superb midrange and very solid lower end. My head was bobbing the whole way through.

The Vena II’s phono section was a nice surprise, and while it’s only for moving-magnet cartridges, it’s still a pleasure to listen to. It’s quiet and detailed, without the grain that often plagues other built-in phonostages. Clearly, QUAD took its time and put in a lot of effort there. Kings Left Behind sounded intense and crystal clear compared to my normal reference phono setup. It had a nice, warm sheen to it, and was cleaner and bigger than I expected.

I think that description applies to the Vena II as a whole. It’s probably an audio-review cliché to say an amplifier sounds bigger than it is, but it’s hard not to go there with the Vena II. I was a bit curious about its stated 45Wpc and wondered at first if it would be enough with the Lintons to really give me a full solid sound while still retaining dynamic headroom. But it easily proved to be enough. By far enough. The little Vena II held a tight grip on those Lintons and never let go, even when I cranked the volume and blasted the title track “Kings Left Behind.” Not even a conga played way louder than it ever should be played was enough to derail the little Vena II.

After enjoying the analog section, I moved on to the digital realm. I hooked up my CXNv2 and streamed Michael Kiwanuka’s new album via Qobuz. The track “Hard To Say Goodbye” is a nice study in midrange tonality. Chirping birds underlie gentle guitar strumming, while Kiwanuka’s voice dominates the soundstage, coming through big with plenty of echo. The Linton/Vena II combo made Kiwanuka sound tight and focused, especially when the distorted guitar and drums picked back up during the chorus. The echoing reverb background vocals decayed nicely, lingering just long enough to give a great sense of space and depth, with the soundstage’s width extended just beyond the speaker baffles. The song itself is a nice contrast between the sparse instrumentation of the opening verses and the lush soundscapes of the chorus and ending outro section.

I think the idea of contrasts is another great way to think about this speaker/amp pairing in general. Big speakers on solid stands, little amp in a little case. The speakers are a throwback to their mid-century design roots, while the amp is very much a sleek and modern thing. They feel like they’d make totally contrasting sounds, but I found that they had an incredibly pleasant synergy. (There’s that word again, but it’s the truth.) When I listened to each component in my reference system without the other, I found each perfectly acceptable, even very good, especially the Lintons. But it wasn’t until I had them playing together that I really felt like both were doing their best work.

That’s a relatively rare thing in the hi-fi world, where there are a million components from a million manufacturers. I expect most of them play well together. But it’s a really nice surprise when they sound better in tandem.

One last example before we go. I streamed the new Floating Points album, Crush, which is an exceptionally dense and complex electronica record definitely worth a listen. In particular, the track “LesAlpx” has this absolutely pounding back beat with shimmering, constantly evolving synths atop it. This was the sort of track I thought might not work with this combo, or at least might not sound its beast, but I was wrong. The Lintons had the bass slam down, keeping the excitement going, but never missed the subtler moments. I could crank the volume up and let the windows rattle if I wanted, which I did when the baby wasn’t napping. Crush is definitely far afield from what I was listening to previously, and yet it sounded as natural on the Linton/Vena II combo as anything else I threw at it.

That’s synergy to me. Any combination that creates an effect greater than the sum of its parts is working in synergy. So much for a buzz word. I promise I won’t use it again for at least a few years.

As individual components, I’d happily recommend both the Wharfedale Linton Heritage speakers with their optional stands and the QUAD Vena II integrated amplifier separately. However, it’s when you put these two together that they really shine. Their sound is on point, and it would be hard to find a living space that they wouldn’t fit into or elevate. I’d be more than happy to have these front and center in my living room. Highly recommended, alone or (especially) together.