It’s been barely a year since I first listened to the Wharfedale Diamond 225. That was my very first review, and I still break out that pair every once in a while. Not out of nostalgia or anything like that, but because the Diamond 225s are a very solid reference speaker, especially for entry-level stand-mounts. They look good; they sound good. They do everything I want a speaker of that price point to do.

I’m mentioning the 225s because I was just sent Wharfedale’s new Diamond 11.1 bookshelf speaker ($499). It’s the middle level of the three available stand-mounts in the updated Diamond 11 line. Three new floorstanders and two new center speakers round out that series and run the gamut in terms of pricing, although they’re still incredibly reasonable by hi-fi standards. And I have to admit, I’m really excited to get to listen to the 11.1s, although I can’t get that past review of the 225s out of my head.

Wharfedale hit it out of the park with the 225s, so much so that I still really like them. I’ve gone through other speakers, other components, new music, a new house, all that life stuff. Changes have happened. Tastes have shifted. But the 225s are still in rotation—steadfast, loyal, pleasant. If there’s anything consistent in my life, it’s the Diamond 225. 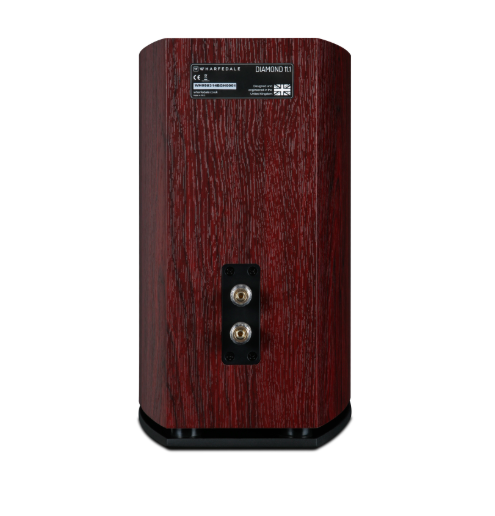 OK, so maybe I’m exaggerating just a little bit. Maybe that degree of devotion on my part isn’t fair to the 11.1s or even to my actual family for that matter. I’m going to listen to these new speakers on their own terms, but let’s be honest here: You never forget your first love, goes the cliché. Well, you never forget your first review, and since I have prior Diamond experience, a lot of these listening notes are backed up by comparisons to the 225 pair. I don’t want to spoil anything from the outset, but I will say this: It turns out, my heart is capable of loving another.

The Wharfedale Diamond 11.1 looks very similar to previous Diamond stand-mounts, at least in their recent iterations. They feature a 1″ textile-dome tweeter overtop a 5″ woven Kevlar bass/mid driver with a glossy black baffle and silver shiny rings around the tweeter and the woofer. “Wharfedale” is etched so finely beneath the woofer that I can barely see it from across the room. They use the same slot-loaded bass-reflex port design seen on past Diamond speakers; it makes the speaker look like it’s standing on a tiny plinth. This feature lets you place them near a wall, where they can still deliver a decent amount of bass—or at least as much low-end output as these speakers are capable of producing.

Wharfedale rates the 11.1 nominally at 4 ohms, although the company notes that it’s 8 ohms compatible, with a moderate sensitivity of 87dB. I found them easy to drive using a few various amplifiers, including my First Watt J2, which doesn’t always do too well into anything less than 8 ohms, but it drove the 11.1s just fine. I also tried them with the Schiit Audio Vidar—a new addition to my system—and that 100Wpc amp provided more than enough power. I mainly stuck with my Cambridge Audio CXA80 for the bulk of my listening, and found it capably drove the 11.1s. I never felt the need to crank them up to Beyoncé-concert levels, but I suspect I could get them there if I really wanted to. Overall, I think the 11.1s would pair best with a moderately powerful amplifier, although they definitely don’t need something monstrous.

The most interesting and striking physical feature of the 11.1 is its curved body. It tapers backwards from the baffle, and looks almost wind-swept. It’s a very pretty effect, and may contribute to its overall natural and smooth sound, which I’ll touch on later. As objects though, they pass the living-room test: I put them in my living room, and I didn’t hate them. Let’s be honest, not every hi-fi component can pass this very basic test, but I’m pretty happy in this case. Wharfedale clearly hit on a winning design with the Diamond series, which is probably why it’s been relatively stable over the last couple of iterations.

Diving into listening, I fired up Amen Dunes’ album Freedom, which I’ve been playing on repeat almost obsessively these past few weeks. I started with the 11.1, and my initial impressions were overall pretty positive. Mids felt projected and effortless, polished in a really nice way. I keep wanting to use the word “natural” here, but that’s not exactly right. Your typical boxy bookshelf speaker can feel a little veiled or muted in the midrange, but the 11.1 avoids this problem. If you read the company’s marketing material, Wharfedale claims that it’s all about that curvy box, and maybe it is. Since I have no other theories, we’ll go with that. Wherever this effect comes from, I liked it, especially compared to the sound of my 225s. Both speakers benefit from a pleasant midrange, but the 11.1s had a bit less of that boxy veil.

In particular, “Skipping School” is a rolling groove anchored around Damon McMahon’s voice. It’s open and clear, even when he’s nearly whispering in the second half of the song. The reverb makes the quiet parts sound a little bit more concrete, filling them out, and when the background music starts to build, the 11.1 keeps everything in focus. That said, the more I listened, the more I noticed that the 11.1 does suffer a bit in the bass department. This isn’t exactly a surprise, given the small cabinet. But even compared to the similar 225, which admittedly does have a slightly larger woofer, the bass felt a little bit anemic at certain moments. For near-field listening, I think the 11.1s would be perfectly sufficient, but if you’re trying to fill a larger room and you love the bass, a subwoofer might be a good idea.

Moving on, I listened to Japanese Breakfast next. The album Soft Sounds from Another Planet is a little misleadingly titled. It’s not soft so much as a mix of synth-driven jams with a touch of funky beat followed by shimmering, almost electronica-fueled soundscapes. I love the acoustic guitar on “This House” in particular. It’s detailed all the way through its range, even and charming. When the piano comes in, the 11.1s do a good job of keeping the sound full without losing distinction between the two levels. Along those lines, the closing track on the album is a very short bell instrumental, undergirded by a low synth. The bells sound strong and concise, their attacks and decays lingering just long enough to give them a good sense of physical space. In the same way that the acoustic guitar was solid and grounded, the bells were pretty convincing.

If the 11.1 really slipped anywhere during my Japanese Breakfast listening, it was in rhythm and timing. That may be because the bass floor isn’t very deep, and so the drum kicks don’t hit very hard, but I found the 11.1s lacked a little excitement. Switching over to the 225s, a little bit of that excitement came back, especially during the track “Road Head.” Shimmering synth and fast-moving guitar were kept afloat by a loud, funky bass, and some hard drumming. I could feel the difference almost right away when I switched between the two speakers, with the 225s driving a bit more forcefully.

Finally, I put on Slowdive’s third album, Pygmalion, which my wife described as “that weird goth church music.” Not inaccurate, but anyway… It’s a very slow-moving, almost lackadaisical shoegaze sound, full of reverb, soft guitar, and gentle drums. I couldn’t help but notice how the lower end of the drumming was almost lost, which could’ve been caused by the deep mix, but the upper bass was still nice and taught. The cymbals on “Rutti” shimmered nicely and didn’t end up as just white noise. They had distinct patterns of attack and decay, somewhat muted but still evident.

As a study of the midrange, Pygmalion is perfect. Shoegaze tends to stick with the same noises, somewhat warped or echoed, but still recognizable and repeated. Through some speakers, this can get a little boring, especially if the subtle contrasts get lost in the overall noisescape. On “Crazy for You,” half of the song is a single phrase repeated over and over, edited and spliced and stretched until it’s an instrument in itself. The 11.1s did a good job of keeping this morass of noise and reflection balanced and coherent. I was engaged through multiple listens and able to pick out the little details that make this album shine.

On the whole, I’m a big fan of the Wharfedale Diamond series, especially its incredibly affordable bookshelf models. I think, in terms of price to sound, the 11.1 is easily on par with the 225. If you have a smaller apartment, or a smaller listening room, I wouldn’t hesitate to put the 11.1s on a very short list of possibilities. You might want to consider a subwoofer for larger spaces, however, if you really crave that deep, pounding bass. But that said, over a large range of musical styles, the Wharfedale Diamond 11.1s never failed to keep me engaged. They always did my favorite records justice. They just sounded simple and good. I can’t really ask more from a speaker of any price.