Westone opened its doors in 1959. In the beginning it made custom molds for hearing aids. It wasn’t until the 1990s that Westone began to adapt its hearing-aid-related technologies to in-ear monitors for musicians and sound professionals. By 1995 Westone was collaborating with Van Halen sound technician Jerry Harvey to create Ultimate Ears. Since then Ultimate Ears and Jerry Harvey have gone on to create their own in-ear monitor brands, but Westone has continued to innovate with multi-driver designs and state-of-the-art production and testing facilities.

Up until recently all of Westone’s products were made in its Colorado Springs facility (which I visited and documented in Issue 263). In its nine separate production studios Westone produces not only custom in-ears, but also the UM line of universal in-ears, military earpieces, and hearing-aid products. But the W Series models, which include the W10, W20, W30, W40, W50, and W60, are manufactured in China under Westone’s supervision.

The Westone W60 ($999) is the second from the top model of the W Series, which now also includes a W80. It is a six-driver system with three crossovers; two drivers each are used for the treble, midrange, and bass. As with all Westone designs the driver technology is balanced armature. The W Series drivers are custom made for Westone by Knowles, the largest independent manufacturer of balanced armature drivers in the world.

Technical Tour
Before we delve into the specifics of the W60 I think it would be a good idea to review the basic technology behind it. The primary “building block” of the W60 is a balanced armature driver. A balanced armature uses a pair of magnets with a movable reed situated between their magnetic fields. The reed is connected to a drive rod that is attached to a diaphragm. A signal sent to the magnets moves the reed, which moves the diaphragm. The diaphragm itself is housed in a sealed enclosure with a tube at one end. This driver mechanism requires less power than a dynamic driver because it is a much more efficient transducer. In many ways a balanced driver resembles a miniature compression driver. Like a compression driver, the increased velocity at the armature’s throat moves air more efficiently than a dynamic driver can. And like a compression driver, most balanced armatures are not full-range transducers (some single-driver balanced armature designs are relatively full-range). Instead most are linear within a limited frequency range, which is why the “best” balanced armature designs employ multiple drivers to cover the entire audible spectrum. 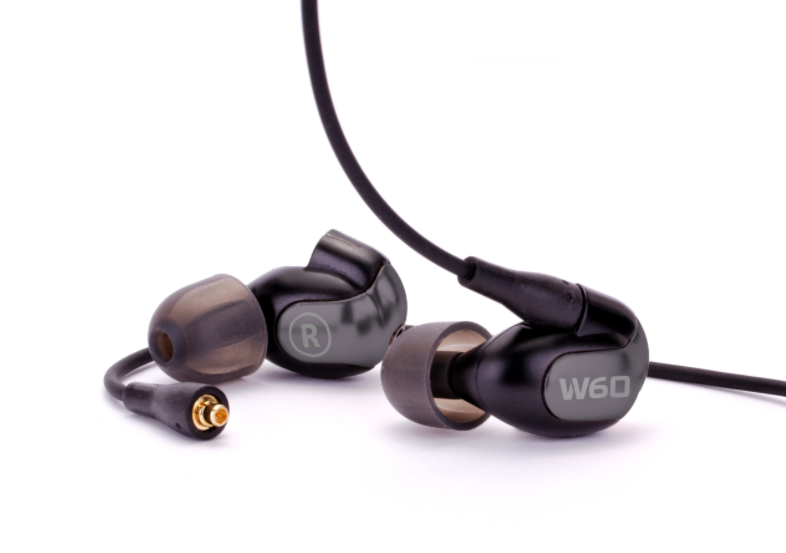 Crossovers for multiple balanced drivers can be “active” with distinct high-pass or low-pass filters, or they can be “passive” where the native attenuation and roll-off of the drivers are used to combine drivers without additional crossover components. Both methodologies have their advantages and disadvantages. Keeping phase consistent through the crossover regions can be a problem for either methodology.

The Westone W60’s crossovers use a “simple” first-order 6dB-per-octave slope combined with the natural roll-off of the balanced drivers to achieve a smooth transition with minimum phase shift. Karl Cartwright, one of Westone’s principal designers, calls the final bit of crossover tuning “acoustic trickery” in that it uses the combination of first-order crossovers and tuning to achieve Westone’s characteristic frequency curve.

Karl was also responsible for something that he calls “the lip test.” This test involves moving the plastic casings of Westone monitors around on his lip to see if there are any rough spots or seams that could reduce the overall comfort of the housing. You can, if you wish, try this at home with your favorite in-ear monitor. If it is well constructed, there should be absolutely no rough spots or edges that you can feel. And why the lips? They happen to be among the most sensitive spots on your body you can access in public without being arrested.

Ergonomics and Fit
The W60 comes with the sort of extras and accessories that you would expect from a top-tier in-ear. Along with five different sizes of Westone’s patented STAR silicone ear tips, you’ll find five different-sized True-Fit foam ear tips. The W60 comes with two cables: a MFi three-button cable for smartphone use, and a 3.5mm braided EPIC cable, which is constructed of bifurcated, high-flex, ultra-low-resistance tensile wire reinforced with Aramid fiber. The W60 also has removable, exchangeable red, gold, and silver faceplates so you can customize your W60’s look. Or, if you’re like me, you might want to put the red faceplate on the right side and a gold one on the left—that way it’s easy to tell which capsule goes in which ear. Of course the W60’s come with a water-resistant orange plastic case that clamps closed and even has a screw-down vent to release moisture inside the case.

I tried all the tips and found that the small STAR and the largest foam ones worked best for my ears. The goal is to achieve a nice occluded (sealed) fit that stays in place yet is still comfortable. There is one additional fit option that I recommend—Westone can make custom ear tips from impressions that will fit on any Westone universal in-ear. They call this their UM56 tip ($129 for vinyl and $149 for silicone, plus the cost of impressions, which is typically $50 to $75). The tip is named after the Shure SM-56 microphone because they were first product of Westone’s collaboration with Shure, which resulted in Shure’s first pro in-ear monitors. After a couple of days using the universal tips, I switched to the UM56 vinyl tips and they became my favorite with the W60s.

Unlike many top-tier in-ears the W60 is quite lightweight and its shape fits nicely into your auricle. I found that once properly seated even a vigorous workout couldn’t unseat the UM56 tips from my ears. Another advantage of the UM56 tips is they provide maximum isolation from outside noise. In this respect they were superior to any of the supplied universal tips.

Since the W60 is so sensitive (117dB SPL @ 1mW), driving it to satisfying volume levels with a smartphone, such as my iPhone 5, was easy. But such high sensitivity is a double-edged sword—many headphone amps or accessory headphone connections that can drive more difficult and less sensitive headphones can produce hiss with W60. Even on its lowest gain setting, the Grace m9xx produced some low-level hiss with the W60, as did the headphone-output jacks on the NuPrime DAC-10H. The Questyle QP1R, Onkyo DP-X1, Sony NW-ZX100, Sony NW-ZX2, AK Jr, AK240, and Calyx M all interfaced nicely with the W60s.

Sound
While it would be a gross exaggeration to write that all Westone in-ears sound the same, Westone in-ears do have a “house-sound” that is based on Westone’s characteristic curve, which is part of the “secret sauce” that makes its in-ears unique. And what is “the Westone Sound”? First off, it is very smooth with a wide frequency response. Bass through the W60 is powerful and while it won’t vibrate your chest (no headphone will), it does push air with impact but also with definition that keeps the upper bass transients from swamping the lower midrange or low bass.

The W60’s midrange is refined, and compared to some headphones might be considered ever so slightly recessed, especially in the upper midrange. I want to stress that this doesn’t mean the W60 has a “happy-face curve” or is compromised in the midband, but similar to the Ultimate Ears Reference Remastered custom in-ears, it is more listenable when confronted with peaky musical sources. Listeners whose tastes gravitate toward more aggressively mixed music will find this a boon.

The upper midrange and lower treble frequencies through the W60 were sufficiently forward that the W60 never sounded too dark or hooded even with the warmest-sounding sources. The overall effect is completely “natural” sounding, but not quite neutral throughout this frequency range.

Image width through the W60 was as wide as I’ve experienced from any pair of in-ears (with one exception). I found it as wide from right to left as with many full-sized, closed, over-ear headphones. Image specificity within the soundstage wasn’t quite as tight or precise as with some in-ear monitors, however. The Astell&Kern AK-8iE and the Ultimate Ear Reference Remastered both had greater image specificity. Also I found front-to-back-depth was not as pronounced as I’ve heard from the two in-ears I just mentioned.

Obviously your choice of player or music source will have a substantial impact on the W60’s sound, but even the least expensive players currently on-hand, such as the Astell&Kern AK Jr and Sony NW-ZX100, mated nicely with the W60, having more than enough gain, dynamics, bass extension, and drive to make music.

Competition
For approximately $1000, consumers have many choices in in-ear monitors (as well as full-sized headphones). I have three that I’ve had recent experience with that offer excellent sonic and ergonomic value. The first is the Astell&Kern AK8iE ($999). This single, full-range, dynamic driver in-ear uses Beyerdynamics’ latest Tesla technology to create a very comfortable, lightweight, in-ear that offers a superb dimensional presentation along with impressive low bass response. The W60 produces a wider soundstage, but the AK8iE has more depth. With universal tips both are equally comfortable, but with the W60’s UM56 tips the W60 has a slight comfort edge.

Ultimate Ear’s Reference Remastered ($999) is a custom-fit, three-driver in-ear that delivers a slightly smoother sound than its previous Capital Studios collaboration, the In-Ear Reference Monitor. The UE RR delivers a better fit than the W60 even with UM56 tips and also has a more three-dimensional image with greater specificity, but it does not have quite the bass extension or image width of the W60.

Conclusion
Once an in-ear gets to a certain level of sonic and ergonomic quality calling it the “best” in its price range or class becomes a very personal observation rather than a universal claim. Fit, musical tastes, and even the environment where it is most often used can play a big part in your evaluation. Having said this, the W60 in-ear may not be my personal favorite for $1000, but it certainly performs on a par with my favorites. It has a well controlled, extended, and smooth frequency response with detailed low bass and an extremely wide soundstage. And while I haven’t performed a series of drop tests to see if I could knock the Westones out of their characteristic curve, I suspect that if you intend to use your in-ears in hostile environments where they will be subjected to abuse, the W60s may well out-point other in-ears because Westone is one of the few manufacturers that performs drop tests on all their models and builds them to withstand abuse.

Yes, I know manufacturers and customers like reviews that are raves, but given the level of the competition in $1000 in-ear monitors, being “on par” with other manufacturers’ best offerings is no mean feat nowadays. Whether you find the W60 to be better or worse than its competition is more about you than the in-ears themselves. But if you’re in the market for a pair of universal in-ear monitors, I would advise you to give the W60s a serious listen. They have a lot going for them.

Vanessa Fernandez: When the Levee Breaks