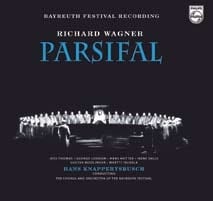 Hans Knappertsbusch (1888-1965) had a special affinity for Wagner—a connection to the source. In the early years of the last century, he was an assistant to the composer’s son Siegfried and a pupil of Hans Richter, the conductor in the pit for the first performance of the complete Ring cycle in 1876. Within the limited confines of the Wagnerian universe, Knappertsbusch had a subspecialty, the composer’s final work, Parsifal. It was the only opera he conducted at the yearly Bayreuth Festival, and he led it there on more than 50 occasions between 1951 and 1964. The veteran conductor collaborated with Richard Wagner’s grandson Wieland in the visually spare production designed by the young director for the Festival’s reopening after the Second World War.

The Knappertsbusch Parsifal discography is staggering. There are recordings available from ten different Bayreuth seasons—most in multiple iterations—including two highly regarded commercial releases, a mono version from 1951 and this 1962 stereo account. “Kna,” as he was affectionately known, had a reputation for slow tempos for his Parsifals and, indeed, this one is longer than most. But the performance never drags: there’s compelling dramatic momentum, even though the opera isn’t exactly action-packed. The music has the requisite spiritual glow without seeming static, enhanced by gorgeous orchestral playing.

And the cast is exceptional. One listens mostly to low male voices in Parsifal and the four in this version are all in great form, and easily distinguished. Many would say that Hans Hotter was past his prime in 1962 but he’s magnificent here as Gurnemanz, delivering the long, expositional speeches with a lieder-like fluency. As the tortured Amfortas, George London fully communicates his character’s agony without scenery chewing, and Gustav Neidlinger is a darkly malevolent Klingsor. Martti Talvela imparts a regal gloom to the dying king Titurel.

Jess Thomas was a real heldentenor, with a slight baritonal quality and satisfying heft to his voice. His rendering of the title role is sensitive and moving, as the singer traces his character’s progress from a thoughtless slayer of fowl to, perhaps, the redeemer of mankind. (I won’t even attempt a consideration of what Parsifal is actually about here.) Irene Dalis, the first American-born Kundry to open a Bayreuth Parsifal, has an earthy and sensual mezzo-soprano instrument, ideal for her mission as temptress in Act II. The minor roles include the (at the time) up-and-coming singers Gundula Janowitz and Anja Silja as Flower Maidens and Gerhard Stolze as a squire.

This five-LP set will run you about $165, a lot of money for one opera (albeit a four-hour-plus opera.) Is it worth it? Well, the sound is terrific, the packaging exquisite, and—most importantly—the performance is nonpareil. I’m a Wagner collector and if limited to just one Parsifal for all eternity, this would be the one. Yes, it’s worth it.

Magico Introduces The QSub at CEDIA 2013

During the Covid-19 lockdown, blues-rock songstress Lucinda William presented a […]

Chesky: Songs for a Broken World

What attracted me to David Chesky’s Songs for a Broken […]

Few rock groups ever flew higher in the charts, sold-out […]