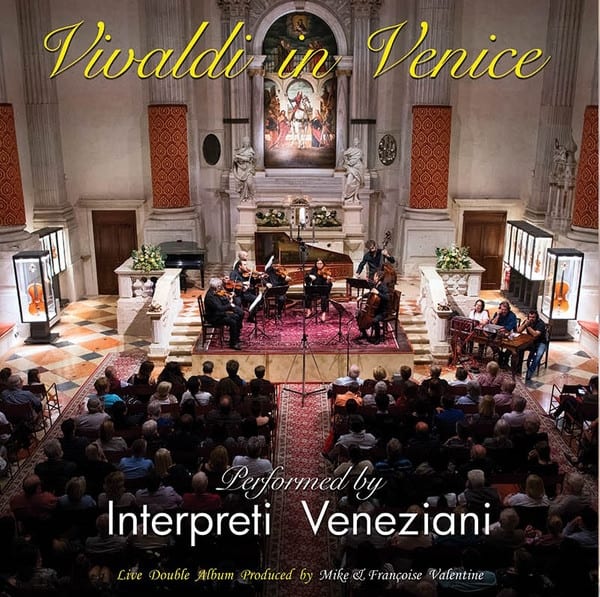 Let me say it up front, Vivaldi in Venice is one of the most gorgeous sounding and exquisitely played LPs I’ve heard in quite some time. Adding yet another fine title to its impressive young catalog, the English label Chasing The Dragon recorded these tracks live in Venice with that city’s Interpreti Veneziani, the chamber ensemble that also performed on the same label’s first release, Vivaldi’s The Four Seasons. As Chasing The Dragon’s Mike Valentine explained via email, “I had worked with the orchestra before, when I recorded them in London performing The Four Seasons as our first Direct-Cut album. However, I wanted to record them performing in their own church, San Vidal in the Accademia region, where they perform over 300 concerts a year.”

Although Vivaldi in Venice is not direct-to-disc, that technical detail matters not at all—this is an exceptional, and exceptionally natural, sounding recording, one  so convincingly lifelike, so intimately present, so detailed and richly textured, that it’s akin to being transported to the venue itself—or at least as far as a recording can deliver us. In addition to what is quite clearly an acoustic jewel box of a church, the sessions took place across five nights to allow Valentine a choice of the ensemble’s best performances, which, except for their running order, are completely unedited. Added Valentine, “I decided to use just two omni-directional microphones. These are the AKG C12 mics which are valve powered and over 50 years old in their design. They were the first microphones in the world where you could remotely control their polar diagram. They sound wonderful over an orchestra and also as a female vocal microphone. In fact, for our latest Direct-Cut album, I used one to capture Eleanor McEvoy’s wonderful voice.”

Vivaldi in Venice’s four sides are largely devoted to the headline act, which opens with the spirited Violin Concerto in B Minor, with its skittering, cat-on-a-hot-tin-roof-like energy, and also includes his delightful Concertos for violin and cello, bassoon, and cello, and the Trio Sonata La Follia, as well as compositions by Giuseppe Tartini (Violin Concertos in A Major and E Minor) and Arcangelo Corelli’s Concerto Grosso in D Major.  Speaking of angels, that is how the eight members of Interpreti Veneziani play these delightful tunes. As I said, the sound is breathtakingly beautiful, with a naturally warm and singing string tone and marvelous detail and textures, all presented with a notable lack of artifice and relaxed ease. The venue is clearly intimate yet spacious, with pillows of air around the players and the listener placed in the front row of the audience. Valentine added, “To improve the stereo location of the instruments on stage I added a ‘Jecklin disc’ between both microphones, which helps separate the microphones from each other, and it really helps provide a very natural recording which still captures the acoustic space of the venue.” And unlike a lot of recording engineers who don’t give a hoot about cables, Chasing The Dragon used some $50k worth of Nordost wires. As you might guess, my conclusion is simple: Buy this record.