(Note: Following is the technical “sidebar” for my review of Vienna Acoustics’ “The Music” loudspeaker that will appear in the September issue of The Absolute Sound. I also nominated The Music for a 2009 Golden Ear Award. Enjoy! JH)

Imagine a dynamic loudspeaker employing a revolutionary flat midrange driver that covers the entire range of the human voice, and works seamlessly with a hand-crafted, coincident silk dome tweeter without producing any objectionable frequency anomalies. What you’d have is a time accurate and phase coherent point source covering the range where most music lives, resulting in music with truth of timbre, an incredibly broad and deep soundstage, and an ultra-wide “sweet zone.” It certainly sounds too good to be true, but Peter Gansterer and his team at Vienna Acoustics have achieved it with their Klimt series loudspeakers, and the results are stunning!

Driver arrays that replace the dust cap of the midrange cone with a tweeter, and align the centers of both units coincidently have been around for decades. Perhaps the most well-know is the Uni-Q tweeter/midrange array from KEF, now in its tenth generation, according to the KEF website. Two speakers utilizing coincident driver arrays, the KEF Model 207/2 and TAD Reference One, have been highly praised recently in these pages by AHC, and I have been impressed by their respective performances, along with the TAD Compact Reference One Monitor, at trade-shows. Along with Vienna Acoustics’ Klimt series, these concentric array speakers share a lot of compelling sonic attributes, most notably in projecting an expansive soundstage with subtle spatial and location cues across a wide listening zone, time alignment, enhanced coherency, and better matching of directivity, when compared to their more traditional, “separated” driver counterparts.. 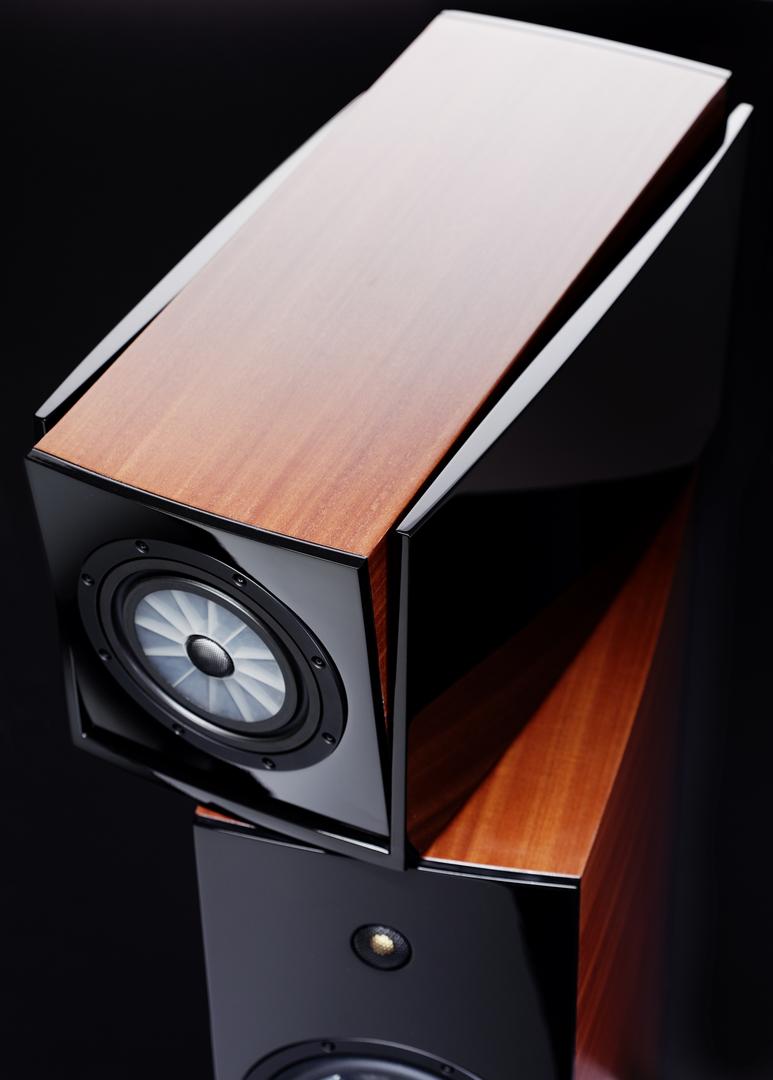 The heart of Vienna Acoustics’ remarkable The Music loudspeaker is a patented 7” flat, concentric midrange driver that is both an engineering and sonic breakthrough. This is not just marketing speak, but a major achievement, aided by advances in materials science, and the skillful application of computerized Finite Element Analysis (a numerical modeling technique using calculus developed to obtain approximate solutions to vibration systems, and typically used to solve complex elasticity and structural analysis problems). Combined with its first-order crossover, for greater phase coherency, this flat midrange with coincident tweeter is housed in a separate sealed enclosure which not only helps to extend the midrange driver’s range, but is completely decoupled from the bass cabinet to preserve clarity and natural musical timbre. Moreover, it can also be swiveled both horizontally and vertically via an ingenious pivoting mechanism, allowing minute adjustments for both rake and toe-in. The ability to aim this top cabinet separately from its lower one, housing three nine-inch bass drivers and a Murata super tweeter, gives The Music a lot of flexibility, helping one to lock-in the soundstage and achieve better tonal balance and coherency.

While mounting a tweeter coincidently within the midrange driver produces numerous sonic benefits than when the two units are separated, it does present other design problems which need to be overcome. With the tweeter placed at the throat of the cone, time alignment suffers and horn loading results which can produce “cupped-hands” highs or squawks. Another problem is that the addition of the tweeter to the midrange driver increases its overall mass, which can affect transient quickness. Over time, designers of coincident arrays have used lighter materials for both the midrange and tweeter drivers, as well as shortened the depth of the midrange cone and flattened its surround. However, unless the midrange driver is completely flat, phase distortion occurs as the output of the cone pumps the highs unevenly at the listener, resulting in a somewhat ragged on-axis frequency response. While a crossover can correct the irregularities in frequency response, it also alters the character and natural launch of the sound, thus impacting the purity of the midrange.

So why haven’t designers of coincident midrange/tweeter arrays just flattened out the midrange driver to eliminate these somewhat deleterious cone effects? The primary reasons are that the cone shape provides needed stiffness to generate sufficient output and frequency response, whereas flat drivers are too soft. The cone also acts as a wave-guide for the coincident tweeter. However, Peter Gansterer saw the design challenges associated with a flat midrange “cone” as opportunities. Indeed, some would suggest that he has been evolving his reinforced-cone, driver technology towards this goal since the introduction of his first Musi speaker in 1991. To stiffen its flat midrange driver, he used FEA to determine where to place its Spider-Cone web, essentially a lightweight net to reinforce the driver and increase its stiffness. He also employed Vienna Acoustics’ proprietary X3P “self-quieting” driver material which provides soft inner damping, but added glass fibers to strengthen the midrange in the molding process for even more rigidity without impacting mass. Adding a “self-quieting” silk dome coincident tweeter ensured that acoustic energy would be effectively dissipated across the entire surface of the array.

Voilà, problems solved! Well, not so fast. Peter and his team spent several years honing at least five successive pre-production models trying to get everything right, even changing seemingly small related materials elements like glues to improve the sound. With such a sophisticated driver, there were also considerable production problems that also had to be solved, but eventually these were overcome, too, and the flat midrange/tweeter array became a reality. 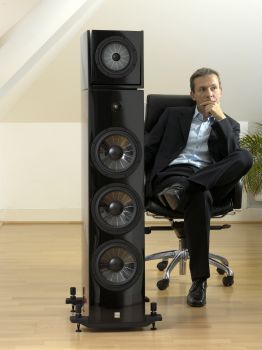 Because of the extended low frequency response achieved with the flat midrange unit, Gansterer was able to use a relatively low crossover point (approximately 100Hz) between it and the three new 9” Spider-Cone woofers. Thus, he was also able to avoid a crossover throughout the entire practical range of the human voice. These low mass, but incredibly stiff, bass drivers are composed of a similar, yet stronger, X3P material as the flat midrange driver (sans some glass), and benefit from a similar lightweight, reinforcing web, developed and positioned on the underside of the drivers using FEA. While all three woofers work in parallel, the first has its own chamber within the bass cabinet, and its primary job is to match the performance of the flat midrange driver. The other two woofers, which are ported out the back of the speaker, add bass weight and reach down below the 20 cycle range.