Some loudspeakers are simply born to dance. It’s part of their bloodline. They reproduce music with a distinctly light, nimble touch in much the same way Fred and Ginger seemed to defy the laws of gravity and float across the ballrooms of the silver screen. Vienna Acoustics loudspeakers seem to evoke this sense of live music’s immediacy in ways that leave other loudspeakers chugging to catch up. I heard this when I spent time with the Haydn Grand, noted the same trait with VA’s concentric-flat driver flagship, the Music, and now with the Mozart Concert Grand SE.

The latest version of the Mozart now merits the SE moniker. Typically connoting a signature edition, Vienna Acoustics opts for Symphony Edition. Like the original it’s a 2.5-way floorstanding speaker designed in a bass-reflex configuration with twin rear-firing ports. More evolution than revolution, the SE continues the VA tradition of extreme attention to detail at every stage of design and production. Fit and finish are superb—as good as they get in this range. I should add that visitors to my listening room inevitably ran their fingers across the impeccable chassis, admiring every minute detail as if caught in the tug of an extraterrestrial tractor beam. 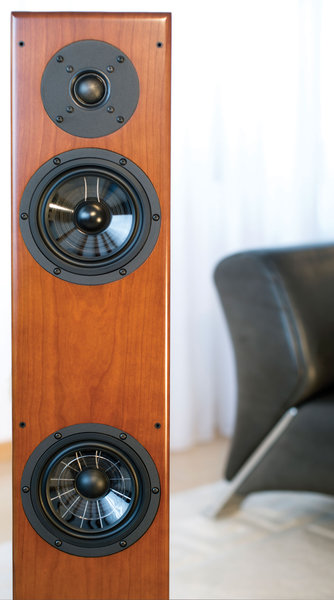 The narrow 38″ tower cabinet employs a thick one-and-a-half-inch front baffle with one-inch sidewalls. VA describes the bracing pattern as “relatively complicated,” with the addition of a lot of internal batting material, which I can confirm. Vienna Acoustics’ cone drivers are noteworthy for their transparency, not just sonically but literally. All designs are in-house. The X3P cone material for the transparent 5″ mid/bass driver is a derivation of VA’s polypropylene hybrid cone technology and combines TPX, a thermoplastic used in their XPP cones, with three polypropylene based synthetics. The 5″ ribbed, mid/woofer is in fact the same XPP Spider-Cone used in the up-market Beethoven Concert Grand. The goal, of course, is to match very low mass with high damping and extreme rigidity for control. These transducers also use an inverted rubber surround to reduce cone edge-resonances. Treble duty is the responsibility of a proprietary 1.1″ hand-coated, silk dome tweeter delivered from Scan-Speak. It’s slightly oversized in diameter and was selected to aid dispersion, an advantage for buyers opting for wide spacing between speakers.

Common to all Vienna Acoustics speakers is the mandate that crossover components hew to tight 1% tolerances—that is except for the inductors, which must meet an even more stringent 0.7% tolerance. Sonic margins are equally rigorous with each production pair frequency-matched to within 0.5dB of the reference pair—the original pair designed by the Peter Gansterer-led team. This achieves a level of consistency that ensures that the final owner is hearing exactly what Gansterer himself hears from his creation rather than a loose approximation. The speaker terminals are also VA-designed and use brass/silver with gold contact points, which are said to achieve a quieter interface. All internal wiring is twisted to reject any crossover-borne noise. Heavy crackle-finished cast-aluminum footers stabilize the narrow towers and are supplied with spikes and dimpled pucks to protect wood floors.

Sonically, the first things that come to mind with the Mozart Grand SE are speed and coherence. Whether it’s the obsessive selectiveness of crossover components or the small quick drivers liberally aided by a clean dynamic tweeter, the result is wide-band frequency response and transparency that create satiny string sections clean, concise winds, and distinct placement cues from deep within a symphony orchestra. The Mozart Grand SE possesses a micro-dynamic resolving power that keenly suits classical and acoustic music. Tonally the speaker is not devoid of character. It’s more finely boned in presentation and conveys a lightness and delicacy that often accompanies smaller driver in narrow columnar enclosures—only this one has genuine mid-thirty Hertz bass and great midrange dynamics. This transparency is underscored by a leaner more sinewy quality that sets limits on the orchestral scale the Mozart can achieve. There’s a small energy dip in the presence range that flatters the dimensional aspects of symphonic music, but it also reduces some of the in-your face energy and grit from Pat Benatar’s scorching vocal from “Love is a Battlefield.” The brass section from Copland’s Fanfare [Reference] takes on a smoother almost glassy quality but for me lacks a bit of attack and urgency. Similarly on solo piano, my favorite instrumental metric, the Mozart SE communicates a stunning soundboard reverberation, and captures the weight and rush of air in the bottom two octaves. But, the relaxed upper mids are almost too pretty, lacking at moments the forward thrust and sound pressure that a well-struck run of notes would have.

Because of its mid- and upper-bass energy, placement options are important. Anticipating room issues, VA provides foam plugs for the ports but I tend to prefer tweaking via repositioning. That said, I came away with mixed feelings regarding bass response. On the one hand I loved having my eyelids pinned back during the final section of Holst’s “Jupiter” from The Planets. On the other, bass response could thicken at times and I felt that the speed often couldn’t quite match the unalloyed quickness of the SE’s mids, particularly at high volume levels. Which is to say that every speaker has limits and the Mozart Concert Grand SE is not the kind of speaker that a DJ is going to take along to a rave party. This is not a knock—it’s only to point out that the Mozart is more of a parlor speaker designed to play at realistic levels in medium and smaller rooms rather than pounding out the chorus to Queen’s “We Will Rock You” at a halftime show at Staples. 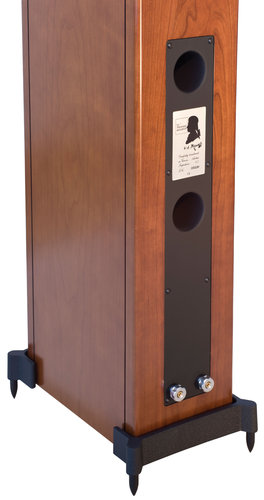 The Mozart Grand SE playbook is equally impressive at low levels, producing a degree of realism and acoustic space that I associate with real concert-going. It’s as if you’re not listening softly through electronics, rather that you’re in a concert hall and sitting back a few rows to experience the performance from a different but undiminished perspective. It’s the rare box enclosure that doesn’t leave a sonic imprint on the music. To one degree or another most absorb micro-dynamics and transient speed and momentum like a well placed speed bump in front of the music. And that’s not even considering the colorations that ported designs often bring to the table. However, in the critical midrange VA has minimized these concerns to the point of irrelevance with the Mozart Grand SE. The result is not just that individual images are cleanly and openly represented but that they are also set within a brilliantly dimensional soundstage. When the Mozarts reproduce the Turtle Creek Chorale, during the Rutter Requiem, the unbroken continuity of the delicate vocal array spreading across the hall’s soundspace is inspiring. It becomes a transparent curtain of energy, corner-to-corner, with a depth and dimensionality that are rewards unto themselves.

The Mozart Grand SE may have a sensitivity of 90dB but that’s at a rated 4 ohms nominal impedance, so moderate power is essential. That’s the difference between the level of power required to establish a heart beat and what is needed to release the SE’s inner athlete. To illustrate this, there’s Natalie Merchant’s “Peppery Man” from Leave Your Sleep [Nonesuch]. I first heard this track at this years CES in the VTL room. An OMG moment ensued. The M450 Series III monoblocks were driving the TAD Reference One speakers and as soon as Luke and Bea Manley identified the song I knew I’d be ordering it post haste. Among the musical marvels on this track are the Fairfield Four vocalists and the stomping tuba which anchors the track in the way a stand-up bass otherwise might. The point to all of this is that with smaller amplifiers, sub-100 watts, this track could sound a bit bloated and veiled. The typical judgment might be rendered that the speaker has issues like vent noise and overhang or a noisy enclosure. But not so fast, because once I laced up the ARC DSi200 integrated to the Mozart Grand SE the tuba’s full character came into being. It was still full-bodied but much more controlled and its timbre more clearly defined, while the rubbery lack of resolution was replaced by pitch clarity and transient detail from the mouthpiece to the bell.

The Mozart Concert Grand SE is a floorstander of many strengths but it has the soul and the moves of a compact. A terrific value, yet so beautifully constructed and appointed it could easily be at home with the black-tie-and-Chanel crowd at an opening night gala at the Vienna Opera House or Musikverein. And if that’s not something to dance about I don’t know what is.

An American in Munich: JV Goes to the MOC 2011 High-End Audio Show, Part One