At AXPONA 2016 in Chicago, I met the man (A.J. van den Hul) himself. In addition to introducing two new cartridges at that show, the Crimson and the Colibri Stradivarius (both precursors to the cartridges in this review), Mr. van den Hul also hosted a one-hour “Cartridge Clinic” seminar. The audience watched a well-seasoned and respected veteran translate the complex inner workings of a cartridge into practical explanations, with the help of a microscope (with a camera projecting a real-time image of an actual cartridge on a screen). On top of this, Mr. van den Hul gathered a few cartridges from the audience and proceeded to inspect (and repair) a couple of them. In one instance, he straightened a slightly offset cantilever using a small set of specialized tweezers. In another, he aligned the coil former in an effort to adjust channel balance (and improve crosstalk). This rare event was enjoyed by all, novice or professional.

The Van den Hul Crimson XGW Stradivarius reviewed here ($5495) has a cartridge body made of Hawaiian Koa wood, which contains a preferred type of fiber. (Koa wood is said to have good internal damping to limit motor vibrations to the ’arm and vice versa.) The outside of the body is coated with three separately applied layers of a Stradivarius-type lacquer that takes 3–4 weeks to cure for each coating. Van den Hul says the difference in how these coatings translate “sound speed” helps to reduce partial resonances. The cartridge coils are 24-karat gold drawn at low speeds to “avoid destructive impacts on the conductor.” The cantilever is solid boron and uses a VDH Type 1s (2×85-micron) stylus. The unit under evaluation has a 1.0mV output at 5.6cm/sec that provides ample signal level for use in many mc phonostages—just be sure to adjust the gain setting appropriately. Optimal recommended load impedance is in the range of 20–500 ohms.

The Van den Hul Colibri XGW Signature Stradivarius ($11,995) is made from the same Koa wood with triple Stradivarius-type lacquer coating, 24-karat gold coils, solid boron cantilever, and VDH Type 1s stylus. The cartridge has an output of 0.75mV, with a single magnet at the top of the rear pole behind the coil assembly that has twice the strength of the magnet in the regular Colibri. Van den Hul says this allows for a steeper modulation curve and a stronger and higher output level than that of the standard Colibri. The optimal recommended load setting for this cartridge is 50–600 ohms. Van den Hul also states that his design goal in the XGW Signature Stradivarius “was to make the best possible cartridge based on over 40 years of experience and construction of phono cartridges.”

Both cartridges were installed on the Basis Audio 2800 vacuum and Basis Audio Debut vacuum ’tables. A variety of tonearms were used (Basis Audio SuperArm 9, Basis Audio Vector IV, and Graham Phantom III) with four different phonostages (Ayre P-5xe, Musical Surroundings Phonomena II+, Lamm LP2 Deluxe, and a custom-designed and modified unit called The Raptor). Both cartridges were played in for a minimum of 250 hours during the evaluation process. Each cartridge was installed in the standard configuration recommended by the manufacturer, and again using a more involved process I’ve developed over the years (see http://www.theabsolutesound.com/articles/setting-up-a-phono-cartridge-1/). One of the more favorable measured results of my own set-up procedure was a channel separation of 35.9dB in both channels for the Crimson XGW Stradivarius. The Colibri XGW Signature Stradivarius had even more impressive 39.6dB (left) and 40.4dB (right) channel separation—up there among the highest I’ve set and measured. 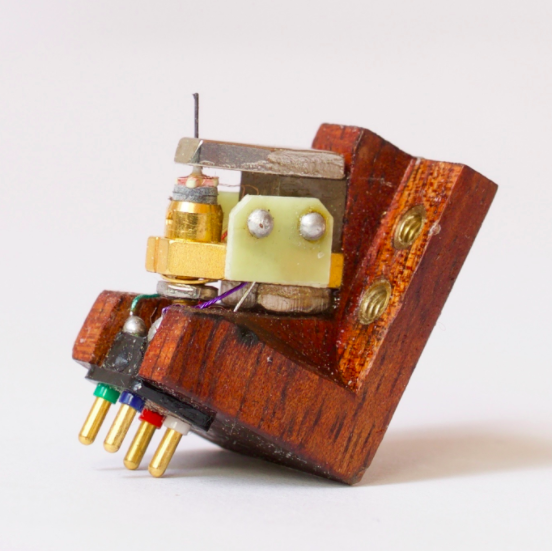 The Crimson XGW Stradivarius is impartial across most of the frequency spectrum (including the presence range), but exhibits large macro-dynamic contrasts from the power region on down. It is quite forceful on transients (every bit as good as a cartridge should be in its price range) but less delicately detailed than its Colibri cousin when parsing complex music passages. The Crimson counters by surpassing its Colibri cousin in sheer bottom-octave drive with propulsive music. While not carrying the five-figure price tag, this cartridge isn’t embarrassed in the company of competition at two (or three) times the asking price in most areas of performance. Its soundstaging, energy, dynamic pacing, and drive are very much above average.

I’ve owned a low-output Colibri XGP (with a 0.28mV output at 5.6cm/sec) for several years. In my TAS review of the Pear Audio Blue Kid Thomas ’table (Issue 244), I described my Colibri XGP as having the character of clarity, speed, low-frequency warmth, non-aggressive behavior (with careful setup), and well-controlled (but generous) high frequencies. (Expanding on this a bit further I would add that it also has a general sweetness and smoothness in those upper-mid to high frequencies.)

This description also applies to the general sound of the Crimson—a personality that clarifies and brings forward the presence region with a lucidity that is unique. The Colibri XGW Signature Stradivarius takes those characteristics, shakes off a bit of the sweetness, and adds a huge dose of authority to every aspect. This is not just the result of its 0.75mV output level. The Koa-bodied Signature Stradivarius is also more dynamic (both micro and macro) and livelier-sounding than the Colibri  XGP, has a larger soundstage, produces more powerful transients, is more propulsive, and offers more clarity of musical presentation. The Colibri XGW Stradivarius’ personality is even more flamboyant than that of its siblings.

Prokofiev’s Violin Sonata No. 1 in F minor, played by Nadja Salerno-Sonnenberg accompanied on piano by Sandra Rivers, is an excellent piece of music. With it, one gets the sense of the transient response of the violin along with its speed and beautiful timbre, as well as a piano that sounds like an actual piano in a real space. The Crimson XGW Stradivarius played back the violin very smoothly with more of the body of the instrument. The piano was set back further while being fuller sounding with more of the signature of the soundboard. The Colibri XGW Stradivarius produced a beautiful string tone with ample harmonics coming off the violin. One could almost feel the pressure of Nadja’s fingers coming on and off each string as she played the notes—very impressive. The piano also had more harmonics coming off the strings and soundboard from hammer strikes. With this cartridge, there was a greater sense of emotion and tension in the performance.

Diana Krall’s new album titled Turn Up The Quiet is put together rather well. The performers are all first-class musicians, and Ms. Krall herself has matured on this compilation. Her poise, combined with less “engineering” of her voice, make this album one of my favorites of her work—right up there with Live in Paris. The song “Sway” is a good example. Played back on the Crimson XGW Stradivarius, cymbal brush strokes are sweet and smooth, and there is a bit of dynamic zest to the musical flow. Krall’s voice is more whole sounding with a bit more chest added to mouth and throat. There is a sense of more felt from the hammer strikes of the piano, while the accompanying strings are set back a bit more in the soundstage with greater proportion and body. Finally, the bass is bigger with that same sense of added body. With the Colibri XGW Signature Stradivarius, the cymbals move forward in the mix while remaining smooth. The guitar becomes more delicate, while Krall’s voice purifies and grows cleaner with a slight increase in sibilance. The piano and strings gain more initial attack and come forward in the mix a bit more. The bass still has body, but the instrument isn’t as big sounding.

One of a group of albums auditioned was a 1993 Analogue Productions test pressing of Chet Baker’s self-titled LP Chet [AAPJ-016]. On the opening track “Alone Together” played back via the Crimson XGW Stradivarius, Chet’s horn was smooth and dynamic with a short echo in the opposite speaker. Bass, drums, and piano were set back in the mix, while sax and flute were present and enjoyable. With the Colibri XGW Signature Stradivarius, Chet’s horn became smoother, airier, and more dynamic on crescendos with a much greater (and more expansive) echo in the opposite speaker that filled the right half of the soundstage. In this configuration, one could hear cleaner valve changes on the notes with more musical bloom around the performance. The bass became more lithe in sound, the piano gained subtlety, and drums stayed back in the mix while cymbals moved forward producing additional shimmer.

With the Crimson XGW Stradivarius, “Festivals” from Debussy’s Nocturnes for Orchestra on the famous Mercury Living Presence LP [SR90281 RFR-1] had a fuller sound with more energy. The hall felt less airy but more clearly proportioned, and instruments blended together more naturally. The horns, when announcing their presence, were further back in the stage. Overall instrumental interplay and the occasional pizzicatos were clearly apparent. The lower frequencies had added weight and solidity. Switching to the Colibri XGW Signature Stradivarius opened things up a bit. That hall ambiance and air became more noticeable, so expansive echoes off the walls were more apparent. The entire performance became more energetic and less homogenized. The sense of instrumental interplay was more prominent during complex crescendos. 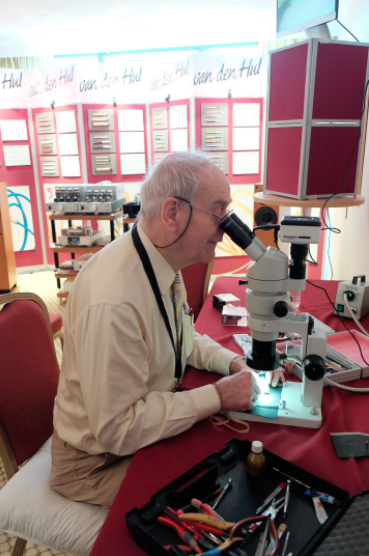 Given the unique personality and addictive character of the Colibri XGW Signature Stradivarius, some of the pop music played with an abundance of energy can result in a bit too much of a good thing. An original pressing of Sade’s Diamond Life, while sounding very good, was very energetic in the upper midrange through lower treble (where vocal sibilance tends to show), as was Simply Red’s Picture Book album. While this isn’t necessarily the fault of the cartridge, it is something to be mindful of when choosing a very high-resolution and high-energy transducer with this sound character for some types of music in certain playback system combinations. With the Crimson XGW Stradivarius, most music played as I described in the contrasts above. There were a few times where I felt the cartridge could have used a bit more leading edge on guitar transients, like those played by Earl Klugh on the Mobile Fidelity reissue of Finger Paintings on songs such as “Catherine” and “Jolanta.” Overall the playback of the album was still very satisfying.

While both cartridges can produce enjoyable sound, there are other matters to consider. Both need a well-made tonearm. Anything that isn’t fitted with good bearings and isn’t a low-resonance design will impart its signature—rickety, loose-bearing ’arms are not a good idea for these high-performance cartridges. Careful attention to additional set-up parameters is always helpful for bringing out the best in cartridges of this caliber (or any cartridges). When in doubt, an experienced professional, a dealer, a distributor, or the manufacturer can be a valuable resource.

A.J. van den Hul has created two very good, high-performance cartridges in the Crimson XGW Stradivarius and Colibri XGW Signature Stradivarius. They both produce an expansive (in all directions) soundstage—partially due to excellent channel separation. Both cartridges will play back instruments with vigor and near-maximal dynamics. They both have the ability to draw the listener into the music. While the sonic characteristics have been described, the difference comes down to cost and personal preference. Both handmade creations by this master cartridge designer deserve an audition because one of them may speak to you.