The original Townshend Rock Reference turntable is one of the legends of audio. Unusual and inventive in design, fabulous in sound, but never widely available, the Rock Reference is now a rare collector’s item. Its less expensive successor, the Rock III, also offered extraordinary sound quality and many of the same unique design features (my review is reprinted here. Now the legend continues with the arrival of the Rock 7 and continues unabated: The Rock 7 is one amazing turntable design. Anyone coming anew to Townshend’s design ideas will be immediately intrigued. And everyone, whether familiar with earlier versions or not, will be deeply impressed by the sound.

All the Townshend turntables have incorporated a unique approach to arm-damping, involving viscous damping at the front end of the arm, right next to the cartridge, using a distinctive damping trough. (Detailed explanation in a moment). When one thinks about it, what could be more logical? One wonders why the idea is not almost universally applied. If you wanted to stop something from vibrating, wouldn’t you grab it directly rather than attach a stick to it and hold on to the far end of the stick? And of course a cartridge is supposed not to vibrate at audible frequencies at all, to sit absolutely still except for the motion needed to remain centered over the groove as the record plays. And yet this totally logical and singularly effective idea is unique to Townshend Rocks, outside of a brief appearance years ago in a Mapleknoll model only briefly available. 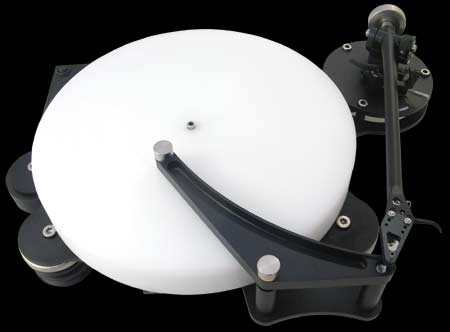 The trough-damping gives a solidity to the sound that one seldom otherwise encounters in vinyl playback. The arm in the Well Tempered Amadeus, with its bearing via damping only, comes close. And absolutely non-resonant arms with more conventional bearings and correct damping like the Moerch series can also perform superbly. But the front-end damping adds something special. And the front-end damping can be added to any arm! The Townshend front-end trough damping is an add-on: the “paddle” is attached via the cartridge mounting screws, so any tonearm can be used on the Mark 7 complete with trough. (Strictly speaking, the trough is an option, but you would be unwise to omit it.)

The new Townshend has, true to its ancestry, the characteristic Townshend sound—the uniquely solid sound characteristic of mastertape and live mike feed, the sound that once heard is never forgotten. The table is straight-forward to set up and the setup is completely stable. The only slightly tricky point is that the motor housing, which is a separate unit, needs to be leveled carefully so that the (round) belt does not travel up and down the driving surface on the sub-platter. But once this is set, it stays set. Once set up, the turntable works easily and consistently. And the sound…. ultra-silent background and imperturbable solidity.

Let’s take a quick walk around the operational features. The table is suspended on springs. These are adjustable, but it is recommended that they be set to maximum and that leveling be done by moving and then locking an ingeniously mounted weight on the side of the turntable, opposite the arm-mounting, which weight can be moved in two dimensions horizontally, so that the turntable can be leveled front to back and side to side using this single weight, which is then locked into position. This system is easy to use, and completely effective, absolutely stable and not a source of spurious vibration. The motor is in a separate box that sits next to, and slightly behind, the table. (As noted, this box has to be carefully leveled to get the speed stable, but once this is done, speed stability is very good; in the higher version of the table to come [see below], speed stability will be even more stable, so to speak.) The motor drives a subplatter by a belt, the subplatter using a tight-tolerance sleeve-bearing with a micro-layer of oil drawn up from a well at the bottom.. This gives in effect a subplatter riding on a fluid layer—ultra-low noise. The platter slips over the outside of the subplatter shaft that contains the bearing sleeve. The record is clamped to the platter by a screw clamp.

The distinctive trough damping works as follows: With the record put on the platter and clamped down, the trough full of damping fluid is swung over above the surface of the record. The trough is in the shape of a circular arc, so that as the arm travels across the record, the “paddle” (actually a small tube) that is attached to the front of the arm sticks down into the damping fluid and moves through it as the record plays. When you are through with the side, you raise the arm with the cuing device, swing the arm out to its side position, swing the trough off to its side position out of the way and you are ready to remove the record, and play another.

The damping fluid is very viscous. Don’t give a thought to the possibility that the fluid will slop on the record when you are moving the trough over the record to start with or back out to the side when it is time to take the record off. Slopping won’t happen. I have used the Rock III a lot, which has the same system and never slopped a drop. The routine of trough over and then trough back out of the way becomes totally automatic. After a few times, you do not give it a thought. But the sonic benefits…those you will give a thought to, indeed!

We can all recall those magic moments when we first heard something that redefined our concept of what was possible in audio. Chances are that you will have an experience like this the first time you hear a Townshend turntable. Actually, something like this tends to happen very time, even after you are familiar with the sound of Townshend. The experience will become familiar, but it will never become stale.

A few other turntables, the Well Tempered Amadeus for example, have as silent, as “black” a background in absence of bearing noise. The comparison is interesting. The Well Tempered system is a little like a Stradivari to the Townshend Guarneri, in a sense: both superb, but one viewing the world from the top down, one from the bottom up. The differences are not enormous, both systems getting at the essentials of the sound actually on the record. But the Townshend has a kind of solidity that is its very own. 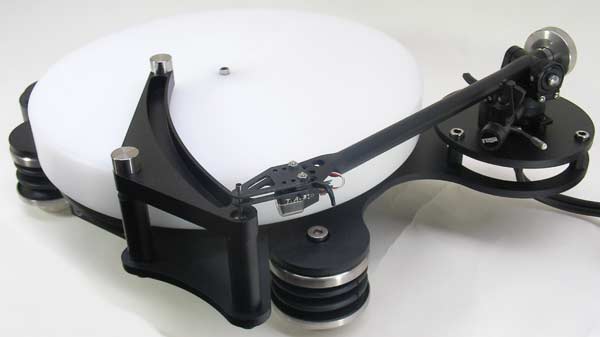 Dan Meinwald, Townshend’s U.S. distributor, brought the Mark 7 over already essentially set up (with an Origin Live OL1 arm and an AKG P8ES v.d.H II cartridge, alas no longer available). After some final setup—leveling primarily and a speed check—we decided to listen to one of our mutual favorites, the Water Lily recording of Ali Akbar Kahn entitled Indian Architexture. I was not so fortunate as Dan to have been at the recording session, but I have listened for many hours to Water Lily mastertape in my work with Kavi Alexander in recording the Philadelphia Orchestra and on other occasions. The sensation of hearing through the whole vinyl situation back to the tape or even the live microphone feed was uncanny.

And the magic of the music made itself felt immediately. As with any great recording, the tendency was to forget to listen for sound as sound and simply listen to the remarkable music, remarkable here indeed. But if one forced one’s attention on sound as sound, one was hard pressed to find any fault at all. At its best, the vinyl medium can seem really “the most not there in the circuit,” as Doug Sax once described the ideal vinyl experience. And with the Rock 7, it seemed all but not there in the circuit at all. (Well, except for the fact that almost no commercial record is actually punched in its true center. I await the turntable designer who follows the lead of the late E. Nakamichi in addressing this major source of pitch instability by providing a record-centering mechanism. This is the obvious thing that separates vinyl from mastertape sound, no matter how perfect the playback setup is otherwise, and no contemporary turntable addresses it.)

On direct-to-disc recordings, the sense of direct access, of non-vinyl, of no medium at all, of hearing the live microphone feed directly, was really stunning. Sax’s own Confederation was absolutely jaw-dropping as sound, and a lot of fun as music, if not the spiritual journey embodied in Indian Architexture.

This type of sound, this sense of hearing directly back to source, is in general terms the common property of all good vinyl playback. Certainly the Well-Tempered Amadeus offered an equally silent background and sonic purity. But as it happens, part of the extreme form of the directness of sound that the Rock 7 gives is related to the front end damping of the arm/cartridge combination.

This can be checked. The Rock can be operated without the trough, simply by leaving the trough in its “idle” position, swung away from the record. The sound is still good—this is a fine turntable as such. But the bass becomes less solid and the whole less tightly controlled and stable. Perhaps there are people who admire vinyl not for its real virtues but for its potential failings—resonances, ringing, and the like—who might prefer the sound sans trough more. But anyone who knows the sound of mike feeds or mastertapes—or music—will want the trough back in use instantly.

One of the interesting features—especially to the potential purchaser—of the arm-trough damping is that it tends to minimize the differences among tonearms. The front-end damping in effect disconnects the cartridge’s behavior from the arm’s behavior in good part. I did not investigate this systematically with the Mark 7, but I did with the earlier Mark III. Less than stellar tonearms still give excellent performance, with the front-end damping reducing, effectively short-circuiting, most of the effect of the arms own resonances. However, the issue of the mass-loading by the arm remains. And the soon to appear Moerch Anisotropic arm, with greater mass in the horizontal plane (or more precisely greater moment of inertia) than in the vertical will offer improved bass over other arms, even in the presence of the front-end damping (as well as in other situations). Still, the bass was superb as is. The damping does its job! 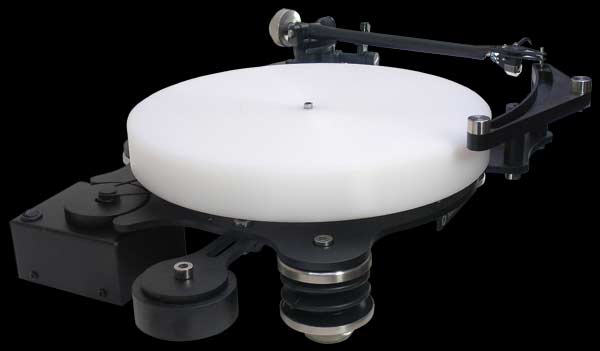 There is a certain perception that turntable design can be pushed on and on, into ever more stratospheric heights by making things larger and more expensive. And I suppose one could imagine pushing the ideas of the Townshend even further. And indeed there is an improved (and much more expensive) version of the Mark 7 in the works, with a special power supply, in which the 33/45 speed change is done electronically and with a flat belt used, which gives (according to Max Townshend) greater speed stability, and some improved structural aspects.

Still, the current Townshend Mark 7 gives very much the impression of getting what there is to get out of the records. The Rock Mark 7 as it is represents a triumph. I would listen to this turntable before I bought anything at any higher price. There are many fine turntables around that have almost magical sonic qualities. Like the Well-Tempered Amadeus, the Townshend Rock 7 shows what remarkable results can be obtained, not by flinging mass and money at the problem, but by inspired engineering. And some of the sonic virtues of the Rock 7 are otherwise unavailable elsewhere at any price. The trough rules!