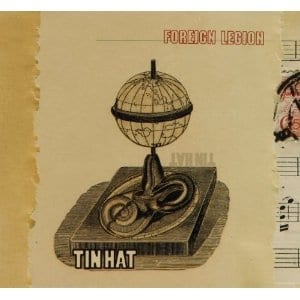 Without the usual studio overdubs, without vocals, and with only one guest musician, percussionist Matthias Bossi, Tin Hat sounds less like a densely textured orchestra and more like a fluidly melodic gypsy-cowboy-klezmer-chamber-jazz quartet. The intimate mix captures the panoply of distinct timbres, from Orton’s slacked acoustic guitar strings and Kihlstedt’s mournful, scratchy fiddle to Goldberg’s smooth rumbling reeds and Anderson’s bop-mariachi trumpet.