In the past two decades, a slow evolution has taken place in audio, as top-notch designers come more and more to understand the nature of the beasts they are working with. Today it is not hard to put together a system that is clean and musical, and extremely well built, for a moderate price. My reference system—modest by reviewer standards—retails for about $13,000. It is cleaner, clearer, more extended at the frequency extremes, more exciting—more musical—than one costing three times that in the mid- 1980s. It is also a reviewer’s system. That is, it accommodates changes. Different technologies in a plethora of review gear pass through it with grace and accuracy, so that most visitors can strut their various stuffs. It is forgiving in many ways—placement of speakers, power capabilities, “system matching,” and the like—and a strict taskmaster in others. It suffers frequency imbalances not at all, shows up badly recorded CDs, and shudders at “hi-fi” sizzle and boom. The weak point in the system now is the room. Since I live in it, I hesitate to make it a laboratory of acoustic treatment devices. (Of course, most consumers probably have that same hesitation, and will be happy to learn that some speaker designs interact less with room resonances than others.) 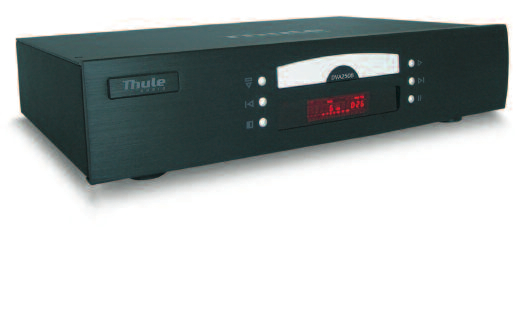 This is not entirely the system I might buy for pure listening pleasure, although I love its sound. Buying for pleasure, I might opt for a pinch more sweetness (forgiving of bad digital recordings). A point that brings me to the present items—the Danish Thule (pronounced “toola”) Spirit IA350B 2- /5-channel integrated amplifier and Space DVA250B DVD/CD player, both of which are truly sweet, in that word’s best possible light. They offer, together and apart, extended frequency response, rich bass, subtle and startlingly transparent midranges, and shimmering beautiful highs. They are simple to use, good looking, reasonable in price. The amp goes for $4000, the player for $2200. I could be quite happy with them as permanent lodgers in my system, and they would lower that system considerably in price (with Spendor S8e loudspeakers at $3000, and Nordost Blue Heaven cabling at about $1000 in my configuration, the total would drop to around $11,000). The Thules are simple black boxes that make musical magic. If you pair them with good speakers and cables, you’ll have a fine system that needs no subwoofer, no powerline conditioner, and no fancy resonance- control feet or other tweaks. So much for the verdict. Now the evidence. With the Thule player in a system based on Musical Fidelity’s kW500 integrated, Vienna Acoustics’ Mozart Grand loudspeakers, and REL’s 108Q subwoofer, the luscious midrange opened like a flower. I had not expected that, since that musical range was already quite wonderful. But the added clarities of the Thule made lyrics, for example, come through with new intelligibility; violins had added rosiny bite; mid-tones in the gamelan shimmered and rang. All this on Lou Harrison’s


Gamelan Music [Music Masters Classic]. The first cut, “Philemon and Baukis,” begins with a soft figure on the liquid xylophone-sounding part of the gamelan (an orchestra of wonderful percussivetype Indonesian instruments), touched with a deep bell tone. A few seconds later, the violin softly comes in with a melodic theme, the xylophone figure ongoing behind it, and that soft, yet deep and reverberant “bong” of the bell or gong an occasional reminder of the Dark. About ten years ago, when I got this CD, a system had to be extraordinary (and expensive) to get the subtleties of the soft tones and the drama of the depths, at once. The gong was swallowed up if you played the piece at a low enough level to get the delicious nuances of the soft themes, so you turned up the volume. But even just a little of that made the gong overwhelm that soft little figure. And when the full gamelan orchestra came in about two minutes further on, you ran for the volume knob. (In those days, a remote’s circuitry was thought to contaminate the purity of high-end sound.) Today, illustrating my theme that audio designers have solved many old problems, I’ve heard a number of systems that get this piece dynamically right, or nearly so. On the Thule player, in the first configuration (with the MF amp and Vienna Acoustics speakers subwoofed), the opening subtleties were lovely, and the low gong haunting yet clean and shapely, receding slowly into silence while the music swirled on around it. The remaining pieces on this recording have always been difficult for me. Harrison uses chorus and solo voices in many of the cuts, and I never really liked them. The harmonies bordered on harsh, and the songs slipped so far into atonality they lost me. But that Thule clarity in the midrange brought out the lyrics and some subtle vocal tones. I found myself entranced. Also there was sparkling air and light among the separate instruments of the gamelan. Those elements I’d found harsh now revealed subtle musical rapprochements. The swelling and decay of the various gamelan tones became sheer enchantment. The room filled with the quick onset then slow fade of boom, under—not swimming over— the rest, and the silvery high harmonics touched the ears like eldritch chimes.


All good equipment, in my experience, brings out different elements of a good recording. If the gear really is basically well designed, choosing becomes a matter of musical and sonic taste and system capabilities. These are areas where the listener will make his choices. An old-time engineer said to me recently that he couldn’t understand how we reviewers continue to hear differences in digital equipment, when in theory no differences can exist. Perhaps he’s right, in theory. But in truth, I hear differences. And so do other reviewers. We’re not making this up, you know, as Anna Russell once hilariously said. Differences subtle and not so exist. Where they come from, if theory denies them, I couldn’t begin to say. But if you don’t believe me, listen to the clarity in the voice range with the Thule player. This is real, because real is what is in the ears.


Next I hooked up my reference Spendor S8e, taking out the subwoofer too, and listened again to the whole recording. The Spendors don’t need a subwoofer (in theory, they go no lower than the Viennas, but see “theory” above). You will feel, not hear a 16–20Hz note; you will get good, clean, solid bass that maintains its character throughout—no muffling or fattening. The overall fabric of the music remained much the same, except that since there might have been some added emphasis in the midrange of the Viennas, the frequency balance sounded better to my ears.


Finally, I replaced my reference amp with the Thule IA350B integrated (running two-channel), and listened some more. I was worried that without the sub and the sheer power of the kW500, the sound would be thin. But this amp has bass—noticeable bass, yet without the sense of being “bass weighted.” What this means, technically, again I haven’t a clue. The low frequencies are full and low, clear and largely satisfying. And the amp has what I suppose to be the Thule earmarks of sweetness, clarity, and richness in the midrange. The highs are transparent, smooth (ragged where they must be, musically—as in some non-beautiful high notes of the violin), and sparkling.


This amp does not, however, have the power of my big reference Musical Fidelity, nor should that be a surprise. It costs less than half as much. Still the overall feel is noticeably lighter. Clean, good, reaching deep into the musical fabric, even in the lows, light in comparison to a bigger unit. This showed up throughout. At its worst, as on ”In Honor of Mr. Mark Twain” on the Harrison CD, where bells or chimes come in behind the chorus, the Thule simply loses a bit of steam. On the MF, the sheet of bell sound rises, threatens to surround the voices (singing in unison), then retreats. Through the Thule, these high tones faded in strength unless I turned the volume up higher than was “right” for this music. The ringing was still there, musically, but its dramatic power was gone. At this effect’s mildest, which is most of the time, you may not notice the lack of the “air,” “force,” and “feel” that you’d get from lots of power cleanly done. But in immediate comparisons, you will. The Thule is clean, clear, balanced. But it does not have the sheer presence of a beefier unit.


Aside from this one thing, the Thule amp is more than satisfying with all types of music. I played Diana Krall and Patricia Barber and got intimate, closemiked, in-the-jazz-club clarity, and luscious vocal nuances—and bass and smallensemble power in spades and diamonds. With Vaughan Williams’ A Sea Symphony’s [Telarc], full orchestral sound also came through, as much, that is, as a non-mega-multi-driver system in an ordinary room can provide. The Thule player is a jewel, and the combo is extraordinarily good. And both play well with others. In addition, they can do double duty: two channel and multi. They are, indeed, a wonderful bridge between the worlds of pure audio and home theater.


The Thule amp provides line-level subwoofer outputs driving the low-level inputs found on most powered subwoofers. Because the Thule is a balanced amp, technicians recommend against using it with subs that require speakerlevel inputs.


In fiddling with the sub setup, I ended up taking it out completely, just for a listen. To my surprise, the sound was fine. Then I went on a simplification journey. I also took out the powerline conditioner. Listened some more. The sound was fine. In fact—it was better. One never plugs amps into line conditioners, but digital players had always sounded clearer. Well, two new designs so far sound oceans better just into the wall outlet. The AC fluctuations and noise problems I probably still have are not audible to me any longer. And the constriction of the soundstage and the timbral veiling I was expecting, sans conditioning, just didn’t happen.


I began to suspect that I was still going on ideas developed in 1980s and ’90s. This made me really rampageous, and I stripped the system to its bare bones. Sub and conditioner already out; I now removed all isolation feet. Listened. Put back only those under the speakers. I took off all damping rings and such from old CDs. With each change—taking out “refinements”—the sound got better and better. And yes, I believe this reveals another advance in modern audio design: Much of the new gear is so cleanly designed, with knowledge of circuitry garnered over the decades, it sounds better naked.


So, as I hinted at the beginning, today is a good day to buy a high-end system. You can get beauty, accuracy, depth, and excitement for a modest sum. And you may be able to simplify: no subwoofer, no powerline conditioner, few isolation devices. A system of well-designed, solidly built gear needs little makeup. Try it, at least as a starting point. Complications you can always add later. So how will you choose this clean, solid stuff? Well, by listening first, and thinking about your druthers. If you have good, clean speakers and you like sound that is clear, yet rich in depth and dynamics, and possesses great midrange magic, I wager you will love the Thule IA350B integrated amp. The DVA250B DVDCD player will enchant you. The amp offers 2 or 5 channels, and the combo will give you a fine system for home-theater or multichannel listening, to boot. Magic and practicality—the mark of modern sonic miracle