Google “SACD + Dead” and you’ll get quite a few hits. Some reference high-resolution recordings—several versions of Sergei Rachmaninoff’s Isle of the Dead, or albums from Dead Can Dance, or some San Francisco band that formed in the Sixties whose name escapes me. But most refer to the allegedly moribund status of the Super Audio Compact Disc, introduced with great fanfare by Sony and Philips in 1999. A decade later, over 6000 SACDs had been released on over 400 labels. The medium’s superiority over Red Book CD in dynamics, detail, and tonal complexity—not to mention its capacity for multichannel audio—was readily apparent to most who chose to give it a serious listen. But with a failure to gain much traction outside of a classical audience (and to a lesser extent of jazz aficionados), the flow of releases slowed to a trickle, while the major labels—Sony included—abandoned ship entirely. This occurred, of course, in the context of the fading away of all physical media: CD sales have declined 80% over the past decade and 75% of record-company income nowadays derives from streaming. So it’s surprising, perhaps, that SACD playback capability remains widely available ten-plus years after the death knells were first sounded.

Or maybe it shouldn’t be surprising. There may not be the flood of SACD releases there was at first—though labels like Pentatone, BIS, Mobile Fidelity, Analogue Productions, Chesky, and Reference Recordings keep it interesting—but audiophiles with large SACD collections may not want to go to the trouble and expense of converting their discs to high-resolution files. To be sure, SACDs are a niche product, but longtime devotees and younger enthusiasts just discovering the format will be happy for reassurance that their holdings won’t become merely decorative anytime soon. In this review I’ll consider three SACD/CD players, from Technics, Arcam, and Yamaha, one of which is brand-new and two of which can also play digital files, either stored locally or streamed. All three are stereo-only machines.

The newest, most versatile‚ and, at $2999, most expensive of the three is Technics’ SL-G700 network/Super Audio CD player, a component in the manufacturer’s “Grand Class” product line. Weighing in at 26.9 pounds, the player’s substantial enclosure has four separate compartments to accommodate the power supply, the analog and digital circuits, and the disc drive—the object being to reduce both electrical interference and mechanical vibration that could compromise sound quality. The die-cast aluminum disc tray operates within a multilayer housing that Technics calls a “triple chassis structure.” The SL-G700’s power supply is a hybrid design, with both a high-efficiency DC/DC converter and, for the analog circuitry, a linear PS regulator, characterized by low noise and greater output stability. The D-to-A circuit has a dual-mono architecture, implementing a pair of Asahi Kasei Microdevices AK4497 chips that can handle 32-bit PCM at 384kHz and DSD sampling rates of 2.8, 5.6, and 11.2MHz. The digital circuit features, as well, a battery-driven clock generator. MQA decoding is on board, though it can be disabled. 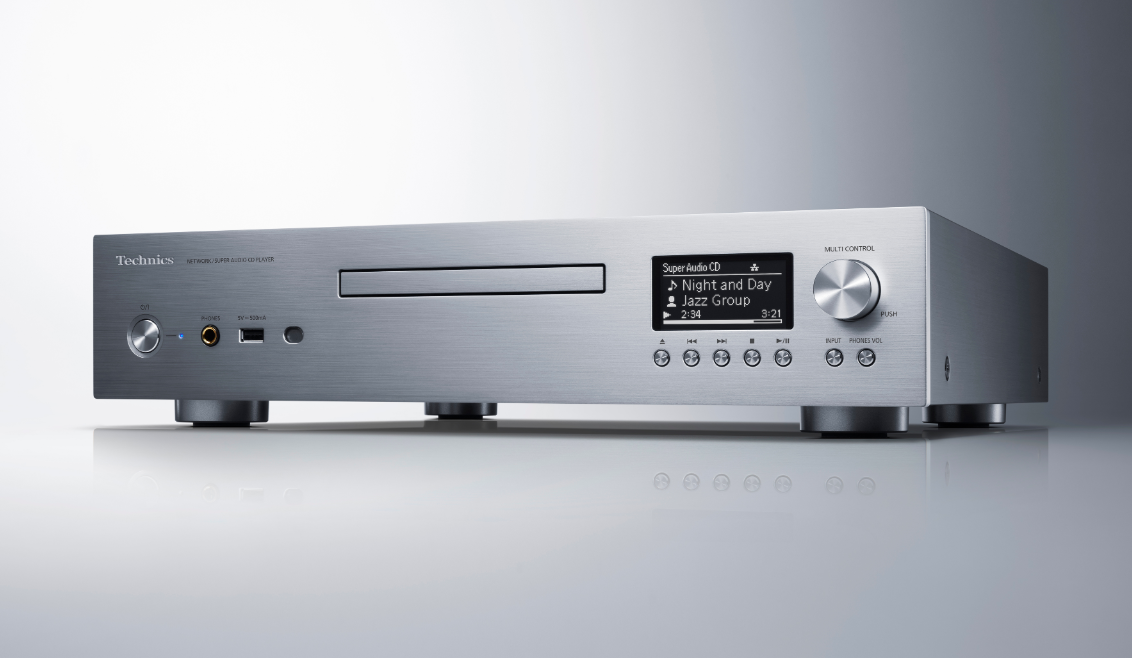 For connection to a local network, the rear panel has the expected Ethernet connection and, for wireless use, a pair of antennae. Also in back are coaxial and optical digital outputs, a coaxial digital input, both balanced and single-ended analog outs, and a USB-A input to connect a thumb drive or external HD. (There’s one of these inputs in front, too.) Anteriorly, there’s a highly functional display, navigable with the supplied remote control, and a headphone jack, as well as buttons to operate the disc drive, select source inputs, and adjust headphone volume. The remote can operate a Technics amplifier, if you’re using one of those. Bluetooth connectivity is provided.

Using either the wired or the wireless LAN involves installing the Google Home app on your smartphone or tablet. For streaming, the SL-G700 is compatible with Chromecast-enabled apps, and installing the Technics Audio Center app provides facilitated access to a number of popular streaming services, including Tidal, Spotify, and Deezer.

Far less imposing in its dimensions and bulk, and having a bit less functionality, is Arcam’s CDS50, released in 2018 and priced at $1200. Here, D-to-A conversion is performed by a 32-bit/192kHz SABRE 9038 Reference chipset, the same device found in the Oppo 205; this chip doesn’t deliver “native” DSD, and there is no MQA. The disc drawer is a rather frail plastic affair that takes a while to load. On the minimalist front panel, in addition to the drawer, there’s a gratifyingly readable display with adjustable brightness, four controls to operate the disc drive, and a large power button. In back, you’ll find an “inlet” for the detachable power cord. (Never heard an IEC receptacle called inlet before; you’ve gotta love those Brits.) There’s a screw to which to attach the supplied antenna for wireless connection, a USB-A slot to accept a drive with musical content, optical and coaxial digital outputs, an RS232 port, and both XLR and RCA analog outs. Like the Technics remote control, Arcam’s is also programmed to operate an integrated amplifier from the same manufacturer. No Bluetooth.

The owner’s manual is mum on streaming, but this is accomplished with the free iOS/Android MusicLife app, which gets you connected quickly to a number of streaming services, as well as to Internet radio.

The Yamaha CD-S1000 has been around the block a few times—it’s been sold for about a decade now, and the price is $1799. (Yamaha makes a higher-end model, the CD-S2100 at $2999, with an ESS DAC, better build, balanced outputs, and USB inputs.) With a weight of slightly over 33 pounds, the CD-S1000 is even more massive than the Technics player. There are dark wood panels attached to either side of the chassis and, depending on your perspective, you may consider the look to be bachelor-pad retro or hopelessly out of date. The disc drawer employs a gearless mechanism in a steel/wool chassis and has the smoothest, quietest operation I’ve ever experienced from a front-loading disc player. The buttons on the remote control seemed impossibly tiny at first, but I got used to them within a few days.

Four discrete power supplies are used for the analog and digital sections, the disc drive, and the display. That display doesn’t do text, which gives you an idea of how long-in-the-tooth this model is. The CD-S1000 uses a pair of Burr-Brown PCM 1796 DACs that can handle sample rates up to 192kHz though, as implemented here, can only output the Red Book specification 44.1kHz via the coaxial and optical digital outputs on the rear panel. The analog outputs are single-ended only. Another reflection of the component’s age is the absence of either networking or streaming capabilities. There’s an option called “Pure Direct.” When engaged, no signal is sent to the digital outs and the front-panel display is turned off—a process, Yamaha tells us, that results in unadulterated “transfer from disc to terminals.”

Andrew Bird: My Finest Work Yet