It’s all too easy for Americans to forget just how international the high end has become. There are so many U.S. firms that there is natural bias towards U.S.-made products. We do, however, need to remember how much American designs owe to British speakers, British and Czech turntables, Japanese cartridges and turntables, Swiss analog and digital tape recorders, French electronics, and a host of other international high-end products.

I mention this because the all-tube integrated amplifier under review is the first high-end component that I’ve seen  from Bulgaria, and is definitely a luxury item made for something of a niche market. The firm that produces it is called Thrax, and it has already established a good reputation in Europe. It was established by Rumen Artarski, who started out as an audio dealer, moved on to professional audio and video, and then decided to meet a local demand for a “no-limits” remote-controlled tube preamplifier.

His story follows the precedents set by a number of other high-end manufacturers in the U.S. and worldwide. After some attempts to get outside manufacturers to produce his design, he met Dave Wilson at the Munich audio show. He describes the experience as follows: “I told Dave the story of my preamp. His comment was ‘get me one,’ and ‘you should start making them if no one else does.’  With that motivation, in 2009, I registered Thrax as a brand and booked my first trade show. Making the product was a pain, as I had zero experience in manufacturing, and subcontracting in Bulgaria did not work for the quality level I was seeking. So, parts were made all over the world and assembly was a lab exercise, but sales were ramping up, which led to the decision to invest in state-of-the-art CNC machines to get that issue dealt with. Little did I know at the time the amount of investment needed and the steep learning curve ahead. 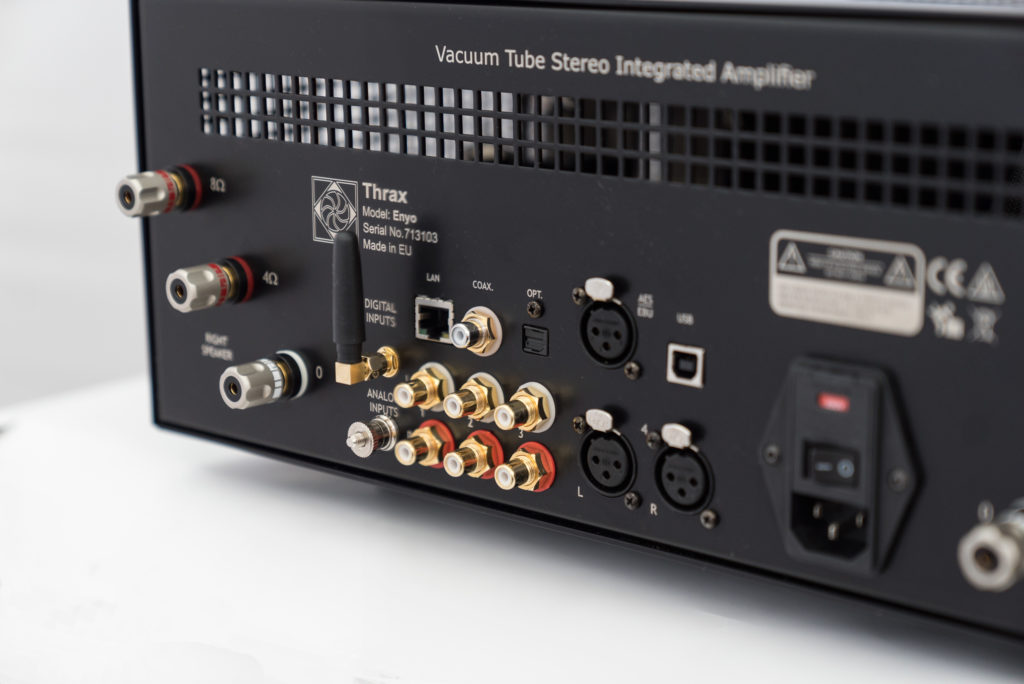 “We are still a small company with 22 staffers and no plans for major expansion. At least 30% of our revenue goes to R&D, and we are one of the very few companies with such broad competence in the audio field that we can look at the whole signal chain and the interaction between components.”

Thrax is now large enough to introduce some 3–4 new products a year, and the Enyo modular integrated amplifier reviewed here is one of them. It is a  relatively compact integrated stereo tube amplifier that Artarski says uses the best components regardless of price—although “compact” is a relative term in a unit that, though highly compact, still weighs some 60 pounds. In spite of its small size, it has an output of 50 watts RMS per channel from 20Hz–20kHz, and its modules include an optional phonostage and optional digital front end. This modular system allows the voicing and sonic nuances of all the active electronics to be controlled by Thrax, with no third-party interconnects between the phono and digital sections. Moreover, the modular setup of the phono and digital boards mean that they can be upgraded over time.

Having auditioned the Enyo at length, I’ve found it lived up to its demanding design goals, but I should stress that much depends on a given audiophile’s needs, system, and taste in sonic nuances. As is always the case in the high end, a “no-limits product” also means luxury pricing. The basic Enyo integrated amplifier alone costs $12,500. The phono board module is another $1175, and the DAC streamer module is $3500. The total price for all three is $17,175.

Mark Levinson No 5101 Network Streaming SACD Player and DAC, No 5206 Preamplifier, and No 5302 Power Amplifier

Use the descriptor “lifestyle product” in the the wrong crowd—that […]

The collected letters of Ralph Ellison, who wrote the classic […]