The Spirit of Rush

Call it “Revenge of the Nerds.” Vilified by the music mainstream and critical cognoscenti for decades, Rush became the prime beneficiaries of some clear-cut revisionist history and ultimately a 2013 berth in the Rock and Roll Hall of Fame, all of which served to reinforce what many of us knew all along: the Canadian trio is one of the most innovative, most progressive, and most interesting-sounding bands of the rock era.

“Rush literally changed my musical life,” confirms John Petrucci, producer and lead guitarist for Dream Theater, the Long Island-bred prog-metal band who adroitly covered “Xanadu” on one of the bonus discs included in both versions of Rush’s A Farewell to Kings 40th anniversary Deluxe Edition multidisc sets in 2017. “After listening to [1978’s] Hemispheres, they became my favorite band ever, and Alex Lifeson became a huge influence on me as a kid and guitar player,” Petrucci continues. “And, of course, stylistically, I found my niche. I knew I wanted to play music in their style—a rock and metal style that was also really progressive—and not be afraid to tell stories and have long songs with multiple parts and conceptual plots. So yeah, Rush really changed everything for me.”

Although the band itself is officially kaput—following drummer/lyricist Neil Peart’s retirement from touring in 2015, the Canadian trio ultimately called it quits for good in 2018—the fruits of over five decades of grandly designed recordings continue to be revisited and duly upgraded via high-grade vinyl (dub those “The Analog Kids”) and hi-res-oriented multidisc box-set releases (aka “Digital Men”). 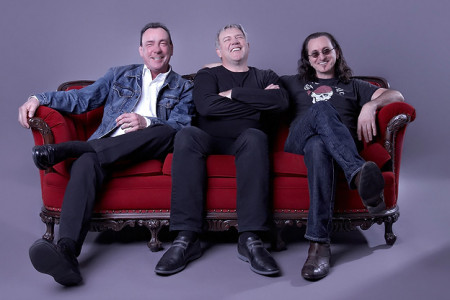 Over 20 albums from the band’s core Mercury and Atlantic-era catalog have seen proper wax upgrades to 180-gram and/or 200-gram LPs via Quality Record Pressings in recent years, the bulk of them remastered by Sean Magee at Abbey Road Mastering Studios in London. Terry Brown, the noted British producer who was behind the boards for every Rush studio and live album from 1975’s Fly by Night through 1982’s Signals, very much approves. “Today, mastering for the higher-weight vinyl makes a huge, huge difference,” Brown believes. “Back in the day, we were mixing to analog tapes, and we really ran into format limitations when we were making the original vinyl. I remember we had a little bit of a problem because of Alex [Lifeson’s] acoustic guitars on [the 1977 LP’s title song] ‘A Farewell to Kings,’ so we had to go to a classical pressing plant, one that could handle the more delicate aspects of the mixing. That way, we didn’t have to compromise in order to get it done right. And it all had to be handled carefully, so it didn’t overpower what Rush was.”

More recently, the band’s latter-era live output has finally seen high-grade vinyl debuts. Rush in Rio, which chronicles the frenzied 2002 denouement of the group’s comeback Vapor Trails Tour in Rio de Janeiro, Brazil, was issued on wax by Anthem/Atlantic/Ole/Rhino in 2019, and rightly spread over four 180-gram LPs to a much better (albeit not perfect) result than the overly shrill original 2003 CD set. (The latter format’s loudness issue was due in part to the volume level of the audience during the show’s first half-hour.) The full band’s whisper-to-a-scream buildups on “Earthshine,” “One Little Victory,” and especially “Secret Touch” all serve to show how three hard-working men can sometimes sound like a force of ten. Meanwhile, the acoustic/unplugged nature of “Resist” and the freeform pseudo-improv jazz of “La Villa Strangiato” reinforce the trio’s collective understanding of dynamic range.

Less than six months after Rush in Rio’s bow on wax, Time Machine: Live in Cleveland 2011 made its own in-full vinyl debut in 2019 on four 200-gram LPs via Anthem/Roadrunner/Ole/Rhino. Actually, the complete-album run-through of 1981’s Moving Pictures in this collection saw its own single-LP 180-gram offering in 2011, but that segment of the overall set is more of an embedded revelation here—the fierce guitar, drums, and bass interplay that crackles and burbles all across the stereo soundfield on the instrumental Morse-code workout “YYZ” and the continent-spanning 10-minute travelogue “The Camera Eye” alone are worth the price of admission (even with bassist Geddy Lee’s somewhat strained lead vocals). The one-two punch of “Marathon” and “Subdivisions” characterize how 80s-entrenched technology beacons can flourish with slightly updated arrangements, while “Caravan” and “Far Cry” flex the band’s songwriting and performance musculature of the 2000s.

In addition to some much-needed vinyl upgrades and LP debuts, the Rush catalog has also seen a plethora of hi-res digital and physical box-set releases, with a successive trio of them coming under the “40th anniversary” banner (2112, A Farewell to Kings, and Hemispheres).

Initially skeptical about the merits of 5.1 being applied to the studio wing of Rush’s recorded legacy, Geddy Lee has since come around to embrace the concept quite wholeheartedly. “Oh yeah, I think they sound pretty cool—if you have the right setup for it,” the bassist/vocalist told me during a June 2019 book signing for his hardcover tome Geddy Lee’s Big Beautiful Book of Bass. When Lee and I first spoke about having the concepts of surround sound and Rush appear in the same sentence in 2000, he poo-pooed the idea (“I’m still on the fence”), but was much more behind its merits in 2015 (“For audiophiles in particular, it takes them on an interesting journey”).

Helming seven Rush studio-album 5.1 mixes to date is Toronto-based producer/engineer Richard Chycki, who’s done the hi-res surround updates for the aforementioned Fly by Night, 2112, A Farewell to Kings, Hemispheres, Moving Pictures, Signals, and 2007’s Snakes & Arrows, the latter of which he’s particularly fond because “unlike the vintage remix/reissues, S&A was done in the same era as the original stereo master mixes.” (Surround guru Steven Wilson was enlisted to re-do the 5.1 on Blu-ray for 2017’s A Farewell to Kings box set, but Chycki’s 5.1 interpretation is still available by way of DVD within the 2011 Sector 2 box set and on the individually issued Kings 2015 High Fidelity Pure Audio Blu-ray.)

“Prior to the Sector box sets becoming a reality, a discussion to repurpose Rush’s past works into new and exciting listening formats and experiences landed many of Rush’s original recordings in my studio for remixing into 5.1 surround,” Chycki reveals. “It’s a surreal and powerful experience to hear their solo instruments and vocals for the first time. From Fly by Night to 2112 to Moving Pictures, each album’s multitrack masters represent a clear snapshot of the band’s profound creative journey. Plus, the masters tell a technical story of the state of recording technology and ingenuity of each album’s era.”

My own personal favorite Rush-in-surround moments include the soothing waterfall break during the title track to 1976’s 2112, the abject all-channel majesty of A Farewell to Kings’ “Xanadu,” Hemispheres’ no-holds-barred 18-minute cosmic thrill ride known as “Cygnus X-1 Book II: Hemispheres,” Moving Pictures’ off-kilter 360-degree sine-wave reading of “Vital Signs,” and Snakes & Arrows’ mega-maelstrom in six channels, “Spindrift.” Chycki has his own faves too, of course. “I have an attraction to all of Rush’s surround works for many reasons,” he reports. “I like 2112 for the enigmatic, sci-fi theme coupled with studio experimentation and Hemispheres for its uber proggy-ness, stratospheric vocals, and great guitar tones. However, Moving Pictures in 5.1 holds a particularly close spot for me as it is Rush at their pinnacle, combined with the surround mix being the only true 96kHz/24-bit masters currently in existence mixed from the analog multitrack recordings.”

Chycki describes the care he takes to get these surround mixes up to snuff. “I recorded Rush’s Time Machine back in 2011 in Cleveland and mixed it in both hi-res 5.1 surround and hi-res stereo for the pending Blu-ray release at that time,” he details. “Typically, I don’t remix a project for one medium or another unless there’s a delivery-format development—i.e., expanding from stereo to 5.1 or to Dolby Atmos. My mixes are delivered as hi-res discrete 96kHz/24-bit WAV files. From there, the files are mastered and adapted to the file format and resolution suitable for the particular delivery medium. Without exception, my preference would be to have the original mix quality maintained at 96/24 WAV.”

What can we expect to emerge next from the master Rush vaults? If history is to be our celestial guide, it stands to reason that 1980’s Permanent Waves would be the next album in line for the 40th anniversary box-set treatment in early 2020 (if not sooner, given the impending holiday season). While Chycki coyly demurs from confirming the idea himself, Geddy Lee was quite specific when I asked him face to face at the earlier-noted Ontario book signing which Rush album he’d like to see reissued in upgraded form next: “Oh, Permanent Waves. That would be cool,” he replied with a smile. Looks like making modern music sound open-hearted and bristling with hi-res energy in 5.1 is a chosen path that’s clear.