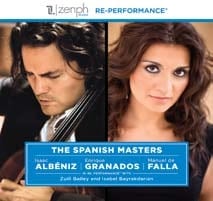 For the first release on their own label, the wizards at Zenph Sound Innovations reanimate primitive recordings by three preeminent Spanish composer/pianists. Isaac Albéniz was a child prodigy, a seasoned performer by mid-adolescence. The New Grove says “unfortunately, he left no recordings.” Not true! In 1903, convalescing in a Catalonian village, he made an Edison cylinder recording. The three improvisations heard here—the earliest Zenph performances to be issued to date—reveal a fluent technique in the service of short but dramatically compelling character pieces. Enrique Granados was also an effective improviser but it’s at least as illuminating to hear him play two of his own familiar Danza Españolas. Most remarkable are the songs composed and accompanied by Manuel de Falla. The piano was recorded in a Paris studio in 1928 and 1930 (Zenph leaves the original singer’s contribution on the cutting room floor) to be joined, in 2011, by two world-class soloists, cellist Zuill Bailey and soprano Isabel Bayrakdarian. Falla may have been only a serviceable player, but the “new” collaborations are pure magic. The choice of instrument is apt, a 1909 Steinway concert grand running off Zenph’s digital code. The piano is realistically scaled and coherent, a bit more distant for the songs.