The 2016 Newport show was a bittersweet event. Coming just four months after the passing of Richard Beers, T.H.E. Show’s founder, visionary, and driving force, Richard’s absence was keenly felt. It didn’t seem quite the same without him. Richard was remembered in a moving memorial service, complete with military honor guard.

Yet Richard would not have been more proud of the way T.H.E. Show continued without him, as was his wish. In fact, this year’s show was a spectacular success by any measure, with record attendance, and the number of exhibitor rooms at an all-time high. An intangible gauge of a show is the engagement and enthusiasm of the attendees. I thought that the passion of the showgoers at this year’s Newport show was second-to-none.

Richard’s long-time friend, Maurice Jung, has assumed the position of President of the show, and Marine Presson continues in the job of General Manager. Together, they have done a remarkable job of not just continuing the legacy that Richard built, but are expanding on it. Expect more great things from the Newport show in the coming years.

Berkeley Alpha DAC Reference Series 2 DAC
What is in my view the best-sounding digital-to-analog converter extant, the Berkeley Alpha Reference DAC, has been replaced by the Alpha DAC Reference Series 2. The new version incorporates a number of improvements in the digital filtering and analog circuitry. The Series 2 is priced at $19,500, an increase of $3500 over its predecessor. Owners of the original Reference DAC can upgrade to the Series 2 for the difference in price between the two models. The Alpha DAC Reference has been discontinued. I heard the new model at the front end of one of the show’s more ambitious systems, which included Soulution electronics, Magico S7 speakers, and Synergistic Research cables and room treatments. Put on by local retailer Scott Walker Audio, the sound was stunningly resolved, spacious, and dynamic. Watch for a review of the Series 2 soon. 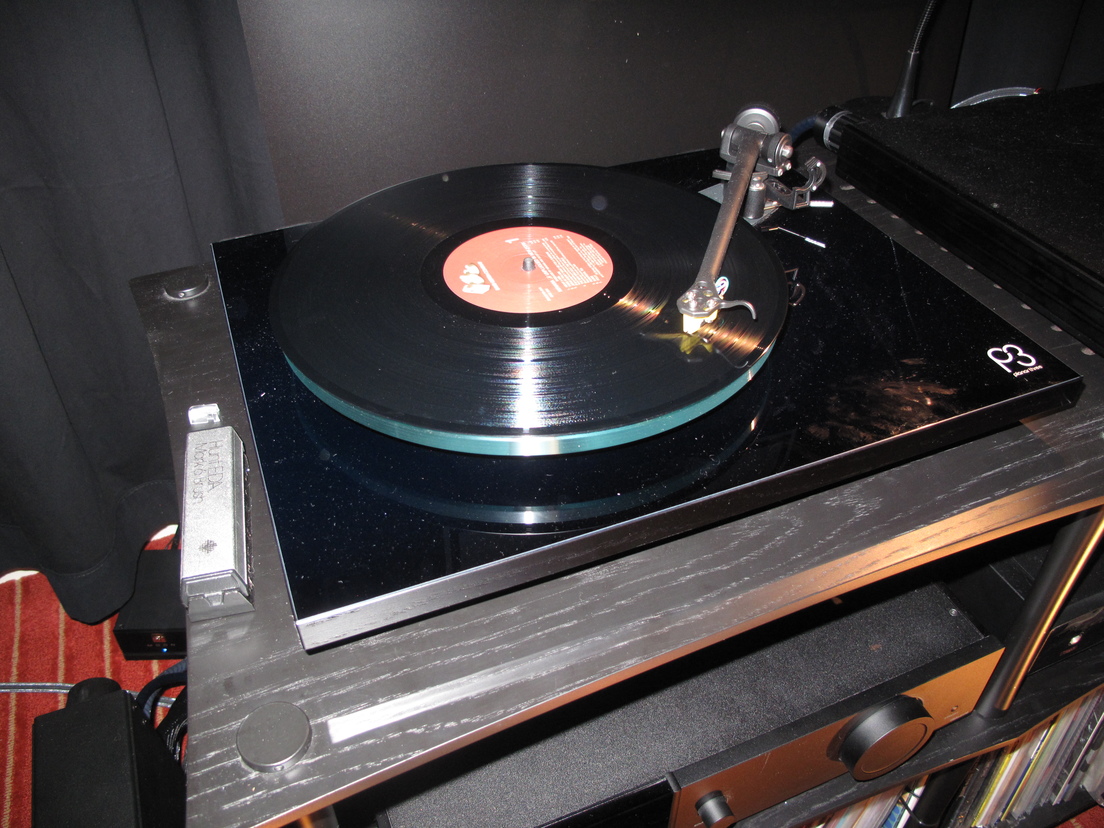 Rega Planar 3 turntable
Rega’s latest turntable, the Planar 3, made its U.S. debut at Newport. The Planar 3 is the result of a two-year development effort that incorporates just two parts from its predecessor. The lightweight acrylic laminated plinth is reinforced by a double-brace system used in Rega’s upper-end ‘tables. As with other Rega turntables, the Planar 3 is a low-mass, high-strength design. The sub-platter has been redesigned for greater stiffness, and the new platter, made from a material called “float glass,” is 12mm thick. The Planar 3 is compatible with the optional TT-PSU electronic speed-change and power supply. Also new from Rega is the RB330 tonearm. This hand-assembled arm features an all-new bearing housing with greater stiffness and zero-tolerance bearings. The arm tube reportedly has less resonance and is more sonically neutral. Available in gloss black or gloss white, the P3 with the RB330 arm is priced at $945 without cartridge and $1145 with a pre-fitted Elys 2 moving magnet. The RB330 will be available separately for $595. 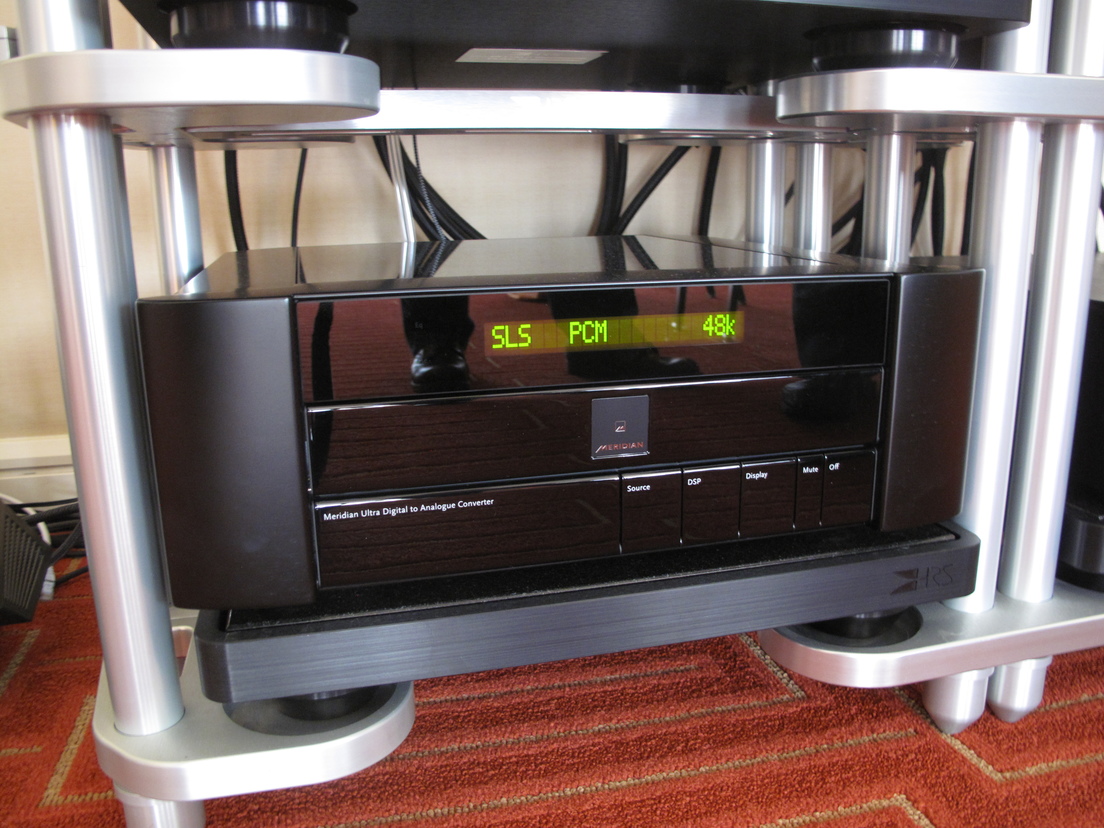 Meridian Ultra DAC
Just after launching the 808v6 Reference CD Player with MQA decoding, Meridian has introduced its top-of-the-line Ultra DAC. Although the Ultra DAC may look similar to the 808, this new product is much more than an 808v6 without a disc transport mechanism; it employs new circuits as well as a novel DAC architecture called Hierarchical Converter Technology. This circuit employs multiple DACs to increase the temporal resolution and lower noise and quantization error. The DAC section is on a removable card, presumably to accommodate future upgrades. The DAC cards employ eight-layer circuit boards and additional power-supply voltage regulation. The 384kHz/24-bit-capable Ultra DAC can decode any format, including DSD128. The Ultra DAC is the first Meridian product compatible with DSD. Price: $23,000. Incidentally, Meridian raided its museum to bring to the show a Meridian MCD CD player from 1983, which was a treat to see firsthand. The Meridian was shown by retailer Sunny Components with Audio Research electronics and Wilson loudspeakers. 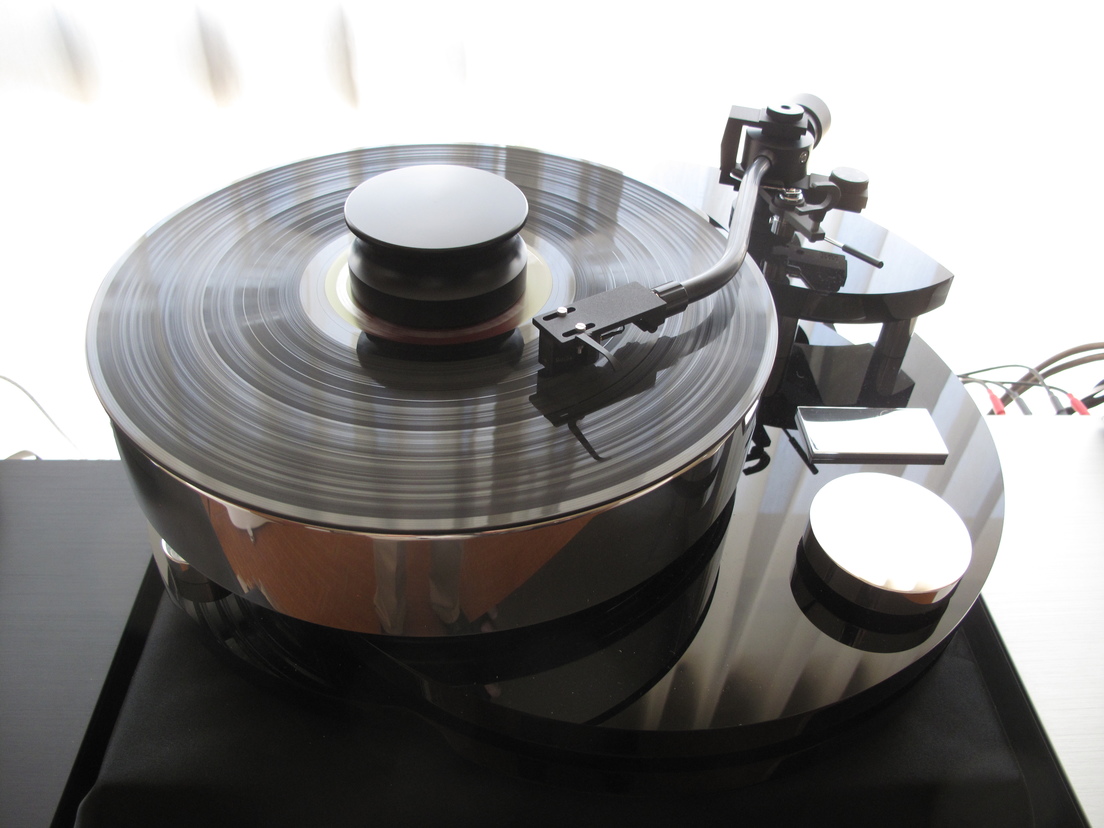 Transrotor Jupiter turntable
The German turntable manufacturer Transrotor introduced, via U.S. distributor Axiss Audio, the Jupiter turntable. The Jupiter features an inverted bearing with a novel bearing-lubrication system that continually supplies the bearing with oil. The Jupiter on display was fitted with a Jelco 750D tonearm and Shelter 201 moving-magnet cartridge; the combination is offered as a package for $6000. An optional Reference Base is available ($2500) that adds additional isolation. At the front end of a system of an all-German system including electronics from AVM and the Gauder Acoustics Arcona 80 loudspeakers ($8495), the Jupiter sounded exceptionally musical and involving. Another product introduction in this system is the AVM P1.2 phonostage ($1300). The P1.2 has enough gain for moving-magnet or moving-coil cartridges, and even offers variable loading via plug-in modules. 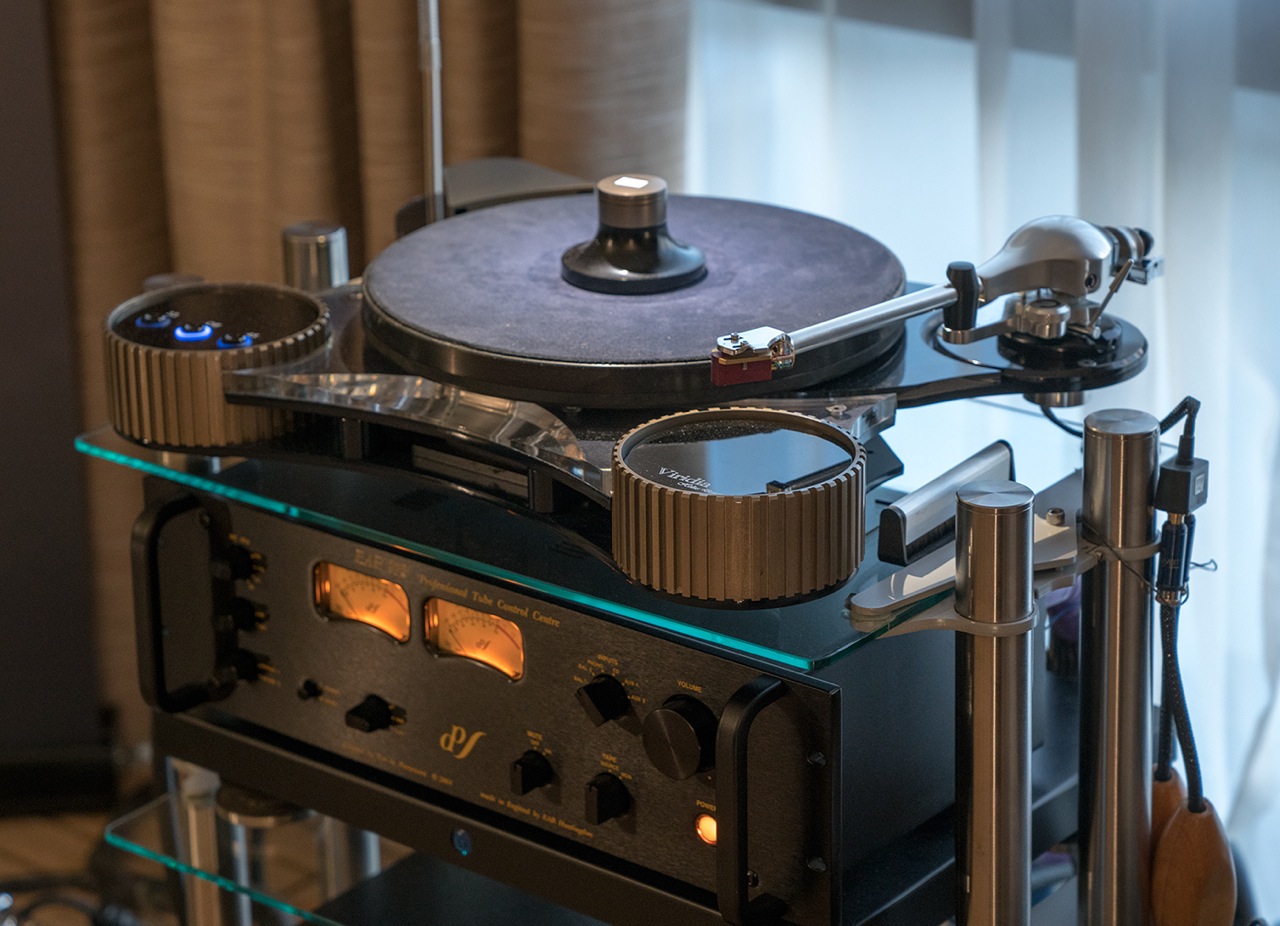 Helius Designs Viridia turntable
British turntable and tonearm maker Helius Designs added a second turntable to its line, the upscale Viridia. Based on the company’s Alexia ‘table, the Viridia features the same double-wishbone suspension but adds a magnetic bearing, new platter mat and clamp, magnetically suspended motor, and a laser-controlled rotational servo. This latter feature is implemented with a tachometer wheel on the platter bottom, flanked by a laser on one side and a photodetector on the other. The overall design goal is to eliminate vibration from within the turntable as well as from outside the ’table. Price: $6500 without arm. The Viridia was demonstrated with the top-of-the-line Helius Omega Silver Ruby tonearm ($5225) and E.A.R. electronics driving Marten speakers, all courtesy of distributor Dan Meinwald. 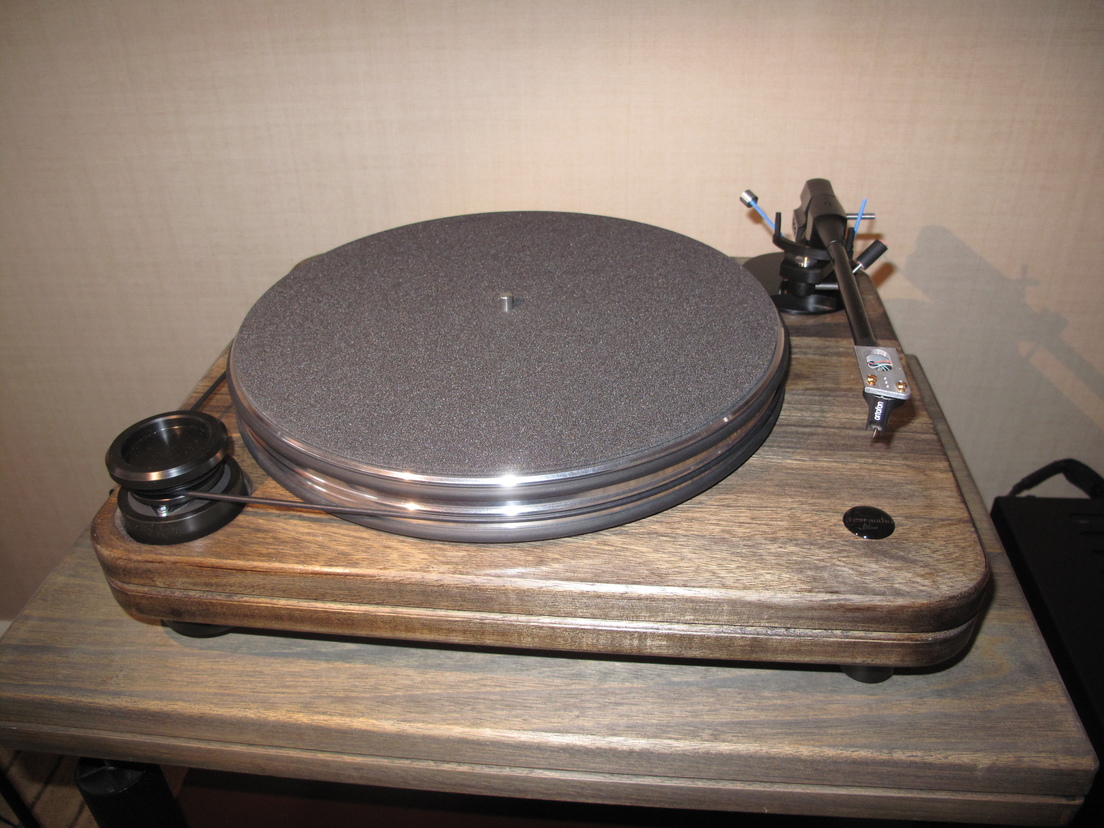 Pear Audio Captain John Handy turntable
England’s Pear Audio named its latest turntable the Captain John Handy after the great blues master. One step up from the entry-level Robin Hood, the Captain John Handy is priced at $3500 with the Cornet 1 arm and $4890 with the Cornet 2 arm. Compared with the Robin Hood, this new ’table features improved feet, greater motor isolation, and a thicker platter. The ’table is available in two finishes. Pear Audio also showed a new top-of-the-line Blue Reference phonostage ($4500). The system sounded quite wonderful feeding the Gamut Di150 limited-edition integrated amplifier and Larsen 8 loudspeakers ($6995), all wired with Gamut cabling. The Larsen speakers, you may recall, are designed to be placed flush with the wall behind them. Despite this placement, the system threw a deep and dimensional soundstage. The sound also had a relaxed ease and musical engagement.

MSB Technology Universal Media Transport V
I heard one of the show’s best sounds (in many ways, the best sound) in the MSB Technology room. The company was showing its Universal Media Transport V5 ($6995) with the Dual Signature Transport Power Base ($4995) driving the Select DAC II ($89,950), all under the timing control of the Femto 33 Clock ($9950). This digital front end fed MSB’s new M204 monoblock amplifiers and a pair of YG Acoustics Sonja 1.2 loudspeakers. The system had a dimensionality, ease, naturalness, and musical engagement that were lacking in many of the other “hi-fi”-sounding rooms. As its name suggests the Universal Media transport will play any disc format (CD, SACD, DVD-A, Blu-ray) as well as stream or accept USB thumb drives. It’s unique in that the transport is clocked over MSB’s proprietary “Pro I2S” interface by the Femto Clock, including the disc drive and the digital output buffer. 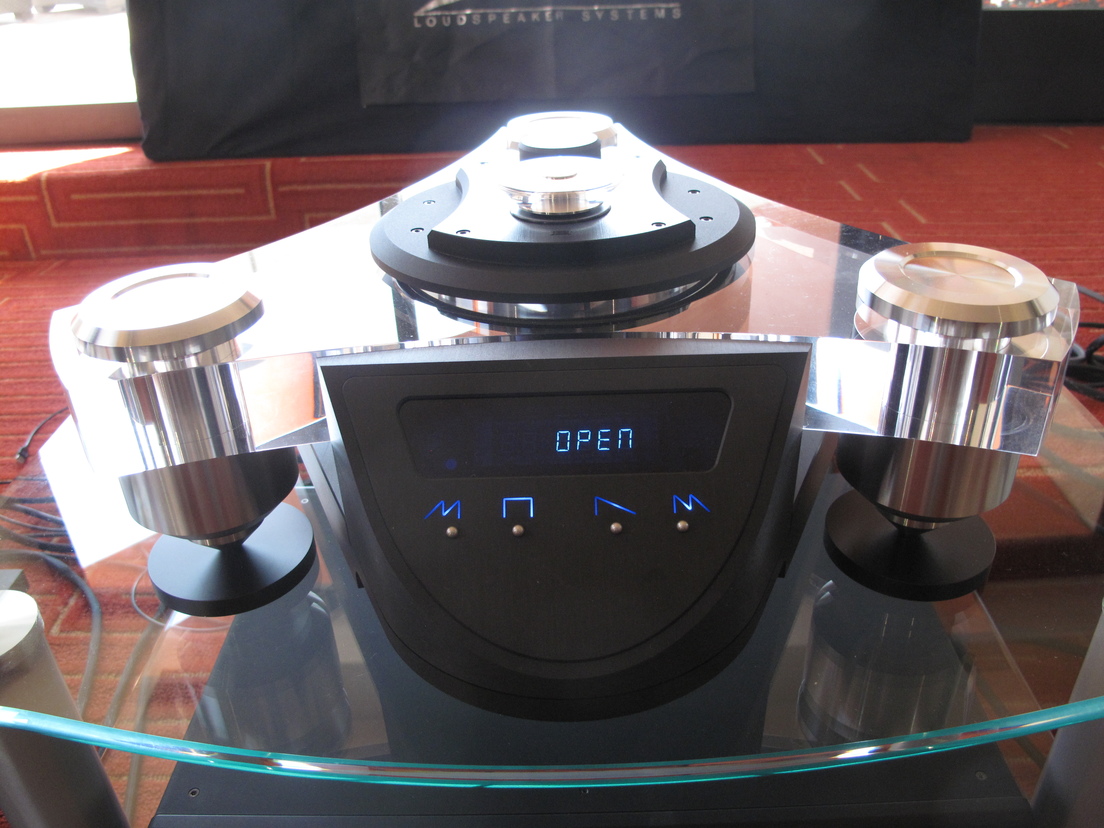 Metronome
The 30-year-old French company Metronome was purchased two years ago from its founders, and the new owner has big plans to invest in the brand. Although successful around the world, Metronome has had a low profile in the U.S. due to the lack of a reliable distributor. Metronome now appears to be ready to take on that challenge with an extensive new line of digital products. Digital audio was always Metronome’s specialty, a fact reflected in its over-the-top-gorgeous Kalista CD transport ($45k!), which was on display. CD transports aren’t the future, but music servers and DACs are. The company showed three DACs, including the C5 with solid-state output stage, the C6 with a tube output stage, and the C8+ that gives the user the option of tube or solid-state. Metronome also showed a network server with up to 6TB of HD or SSD storage, and control via iOS and Android apps. 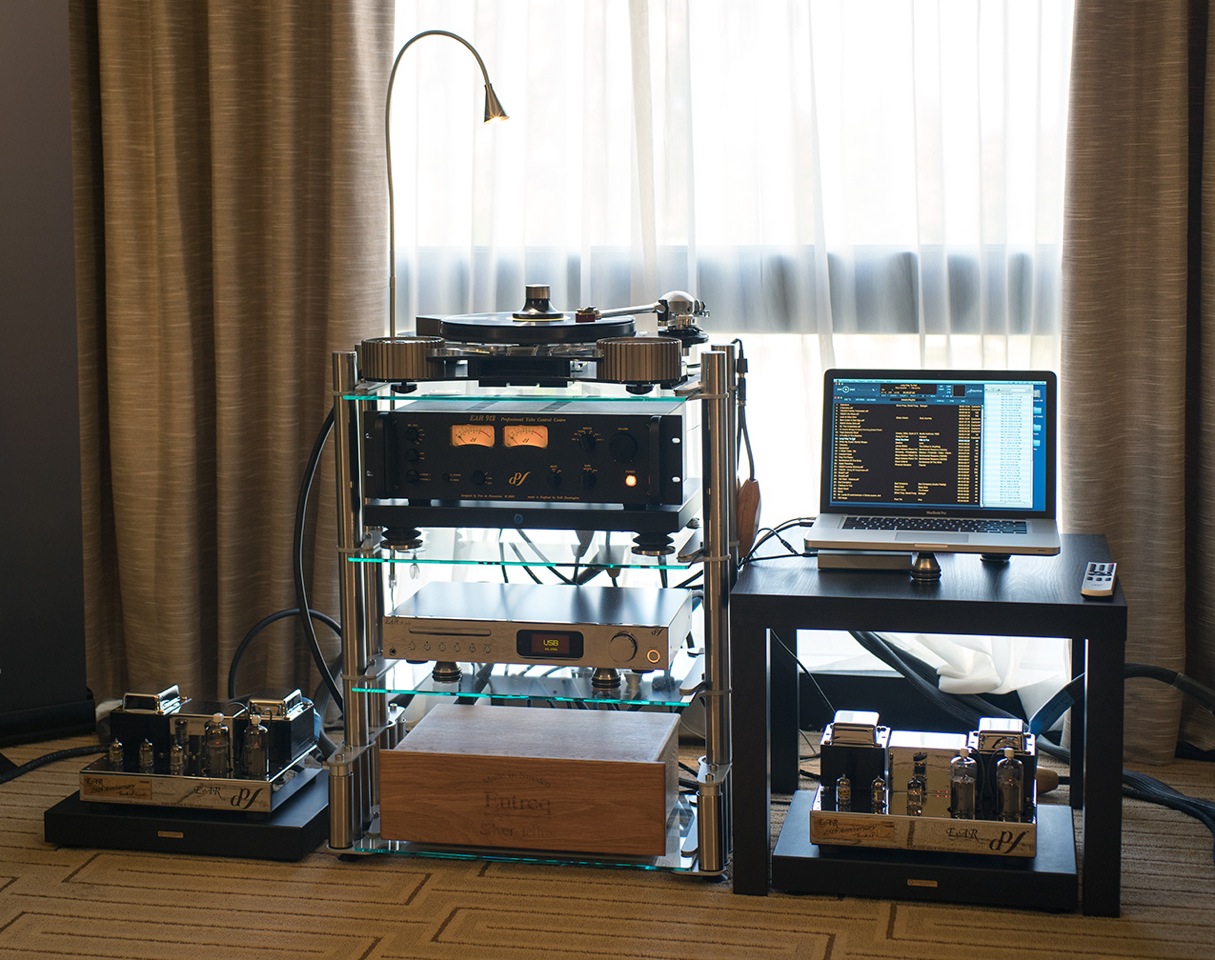 E.A.R. Acute Classic CD Player
Another debut from Dan Meinwald was the E.A.R. Acute Classic CD player, a ground-up redesign of E.A.R.’s highly regarded earlier digital products. The Acute Classic will also accept digital inputs from USB, optical, and SPDIF sources. All signals are upsampled to 192/24. Not surprisingly, the output stage is a pure tube design, with balanced and unbalanced outputs. A headphone output is also included. The $6800 Acute Classic is Tim de Paravicini’s statement in digital playback. 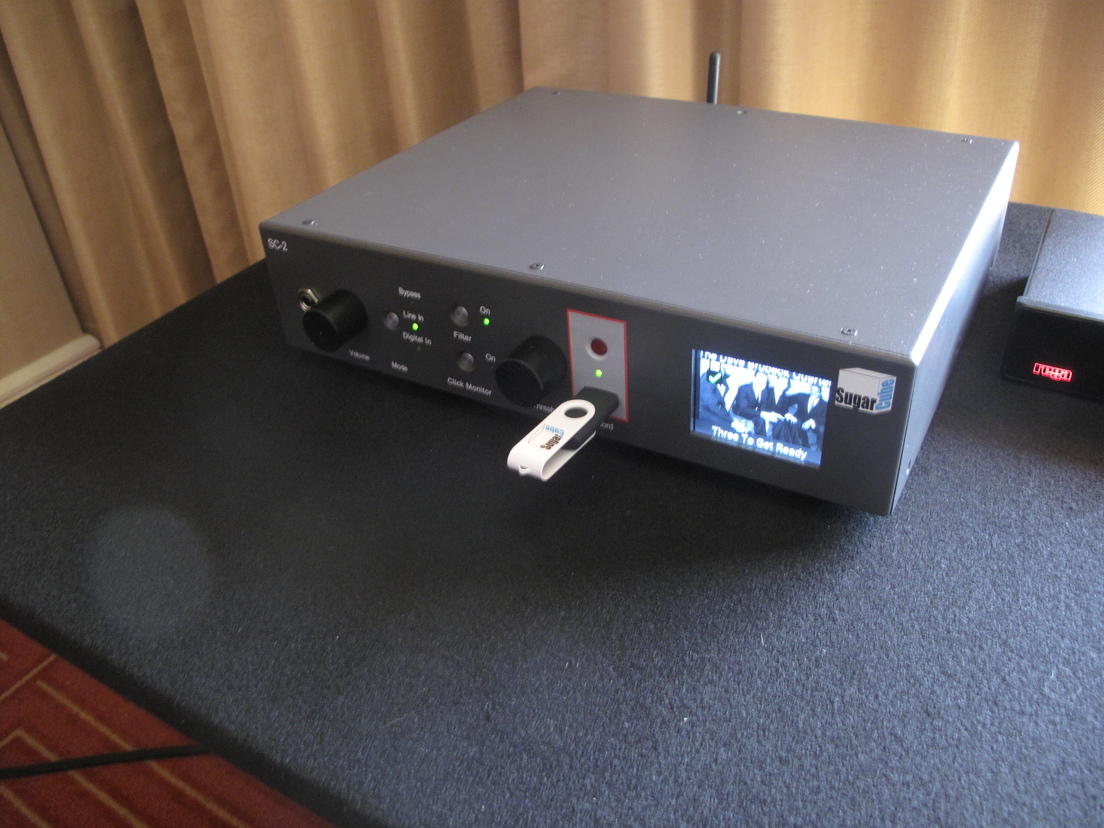 SweetVinyl SugarCube
If you’ve been looking for an easy way to rip your vinyl collection, the SugarCube from SweetVinyl is the answer. Plug a line-level signal into the SugarCube and it will search Internet databases to retrieve the metadata for the LP you are ripping. The album art is displayed on the front panel. Insert a USB stick into the front-panel port and you’ll have high-res digital files of your records, tagged with metadata and album art. The device also removes clicks and pops, with no degradation or artifacts that I could hear in a short demo. In addition to its on-board 192kHz/24-bit analog-to-digital converter, the SugarCube incorporates a DAC and headphone amplifier. The whole she-bang can be controlled via a tablet or smart phone app. The product will be priced at $1999 when it begins shipping at the end of this year. Note that the SugarCube has evolved since my CES report on the product; it no longer features an integral phonostage.

Aurender A10 Server and DAC
Aurender, maker of upscale music servers, has entered new territory with the A10, the first product from the company to incorporate a DAC within a server. The A10 features 4TB of storage, MQA decoding, and both balanced and unbalanced outputs. Priced at $5500, the A10 will be available in September.

Best Sound (cost no object)
No single system was head-and-shoulders better than the rest of the pack, so I’ll name a few of the rooms that struck me as particularly good-sounding, in no particular order. Von Schweikert Audio teamed up with Constellation and Critical Mass Systems to produce the best sound VSA has achieved at a show. The VR55 sounded exceptional, particularly when fed from a Technics SL-1500 open-reel tape machine. The aforementioned MSB room sounded more like analog tape than 44.1/16 digital, with depth, layering of images, and an overall ease. The newly introduced Lumen White White Light speaker from Switzerland ($70k) not only looked gorgeous, but also sounded fabulous driven by Ayon electronics and front end.

Best Sound (for the money)
The Eddy speaker from a new speaker company called Evoke caught my ear for its tremendous price-to-performance ratio. The $3995-per-pair Eddy features a ribbon tweeter, planar-magnetic midrange, and a cone woofer. Driven by NuPrime electronics, it sounded clean, fast, and transparent—and like it should cost much more than $4k. Among the show’s many mega-priced systems, a complete system costing $13,000 was rare. But that system, the Jadis Orchestra integrated amplifier, Spendor SP3/1R2 speakers, and a Roksan Radius 7 turntable, made more music than many systems costing much more. The Aerial Acoustics 5T ($3795) driven by T+A sources and electronics was another standout that didn’t cost a fortune.

Most Significant Trend
The growing size and importance of regional consumer shows.

T.H.E. Show at Newport Beach: JV on Loudspeakers $20k and Up

The Move to Make Hi-Res Mainstream