Southern California has an audio show problem. It’s not new, and it’s not clear why. Perhaps it’s the slow-burn of internecine rivalries, sketchy venue selection and promotion (remember LAX?), or just plain bad luck. In any case it shouldn’t have to be this way in a region so densely populated—a virtual playground of art and culture that can boast sunny weather all year long. More likely, however, the issue isn’t just Los Angeles per se. It’s timing. Closely following the two biggest trade shows of the year, AXPONA Chicago and Munich High End, is not a recipe for success. Exhibitors are tired, and there is only so much time and money to allot to the bevy of shows that already dot the yearly calendar. So what’s an audio show to do? After last year’s flameout, the Home Entertainment Show organizers proclaimed—what else?—T.H.E. Show must go on. They relocated to the snazzy Hilton Hotel in Long Beach, a fairly brisk forty-minute freeway ride south of downtown L.A. The venue was contemporary and attractive, about sixty rooms overall with convention-scale rooms and audio marketplace on the second floor, and the rest on the third through sixth floors. Given that I only had a day to visit, this report is by no means comprehensive (apologies all around to folks whom I missed). Nonetheless, here’s a snapshot of some of my personal highlights. 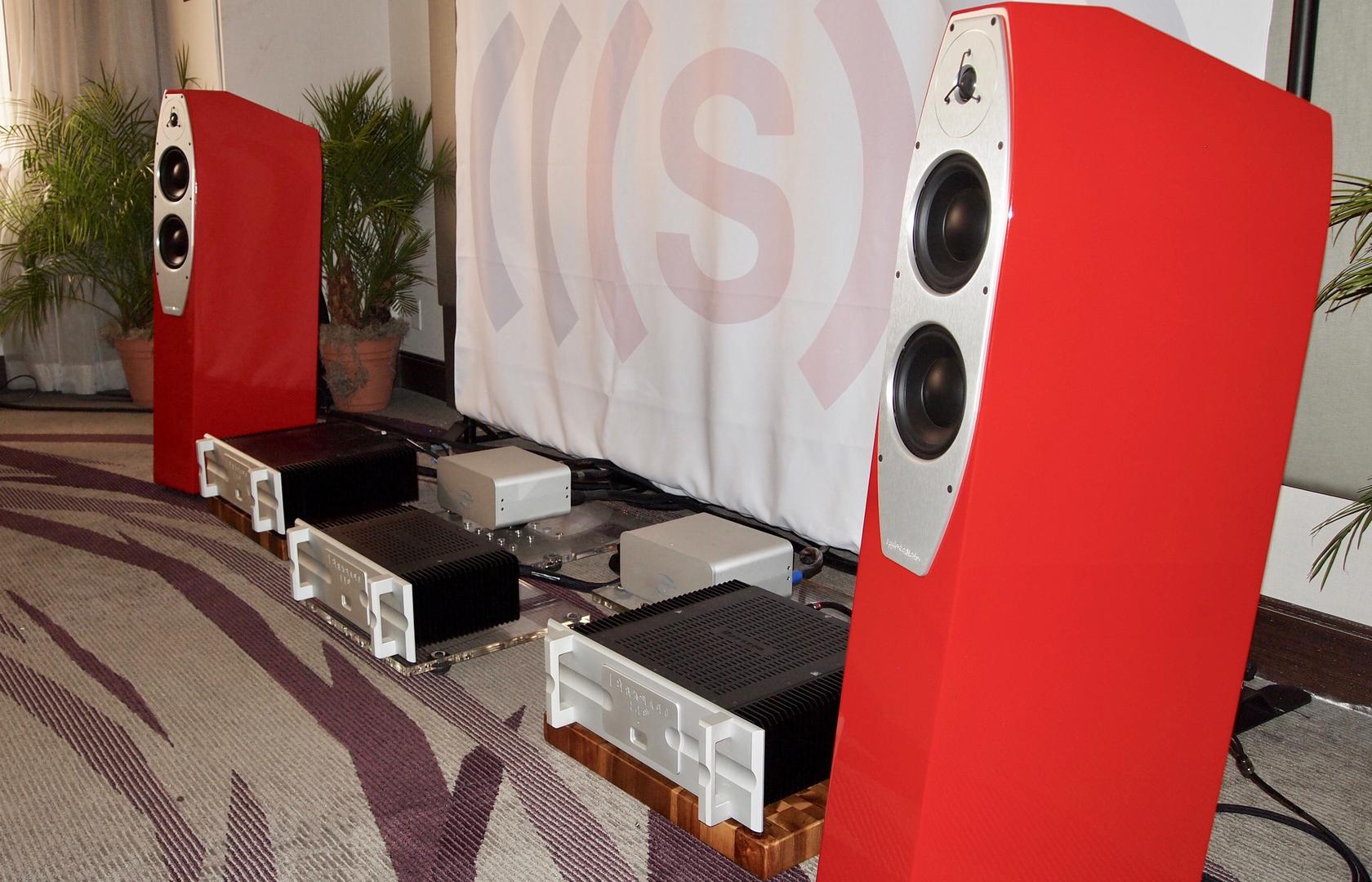 Dominating the sixth floor were exhibits courtesy of SoCal local Sunny Audio Video. I was particularly drawn to the handsome EgglestonWorksEmma Evolution speakers ($5495), which were driven by Bryston3B3amplification and digital, plus a TechnicsSL-1200G ’table and Audience cabling. This was an inviting, near-effortless sound, clearly designed for easy and extended listening in mid-size to smaller rooms. The noteworthy Swiss firm Stenheim demo’dits Alumine 3 speaker ($29.5k), pictured at the top, which debuted at AXPONA this year. Also designed to be an easy-to-drive, room-friendly model, the three-way, four-driver offering was fast and dynamic, and imaged beautifully. A speaker of significance. No doubt the CH Precision electronics and digital, a Technics/Lyra LP rig, AudioQuest cabling/conditioning, and Harmonic Resolution isolation played a substantial role in its performance. Sunny A/V also featured a system comprising MartinLoganESL13A/Hegel/Aurender gear cabled with Audience and AudioQuest wire, as well as a very musical Vandersteen Quatro/M5-HPA amplifier/Rowland Corus preamp setup with a Brinkmann Bardo tonearm/turntable, Lyra cartridge, and HRS stands and AudioQuest wire. 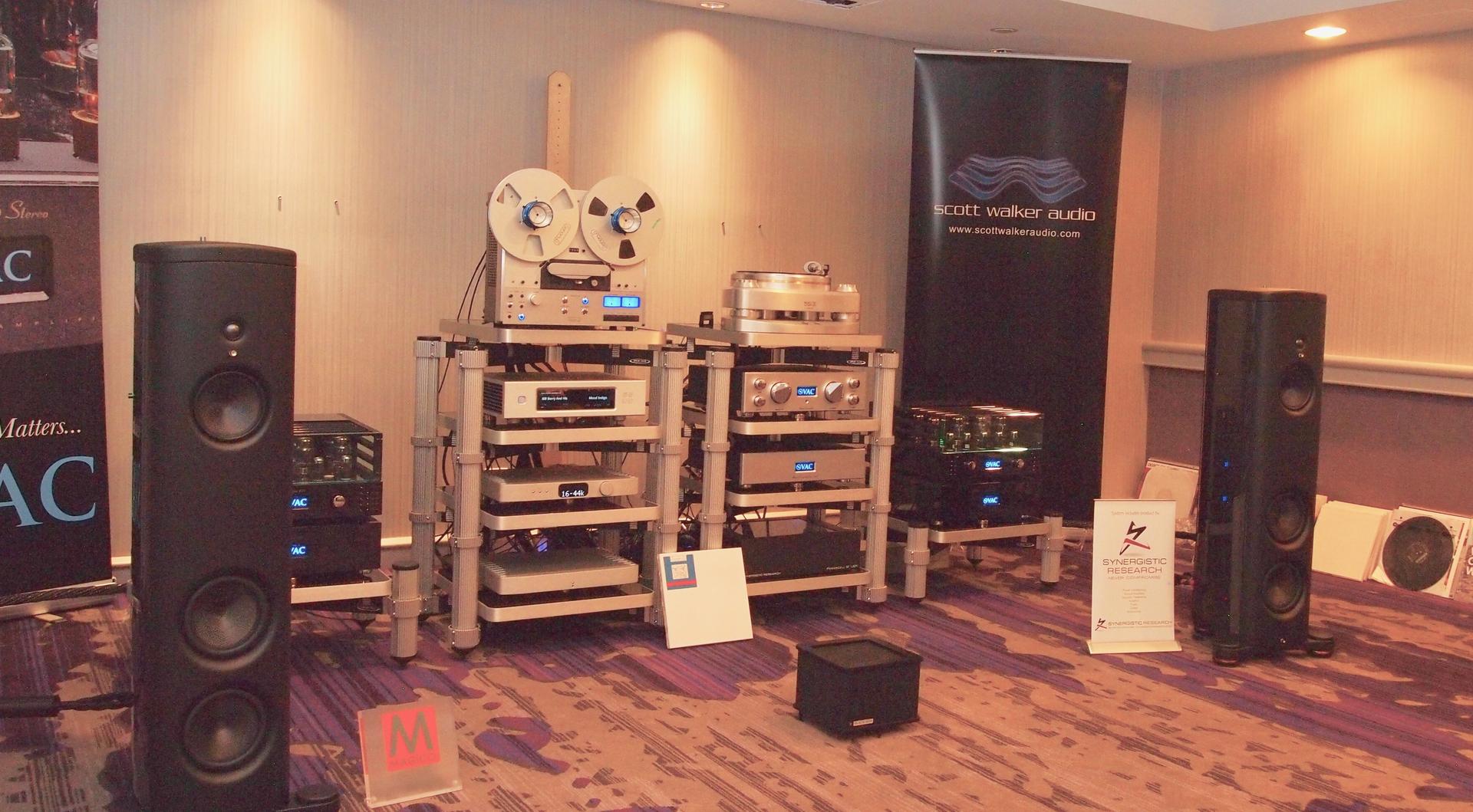 Another powerhouse local exhibitor was Scott Walker Audio with exhibits that pretty much filled the third floor with unalloyed high-performance sound. Wisely, the rooms were designed to appeal to enthusiasts of varying budgets and geared to gradually ascend the heights of resolution. Magico and Synergistic Research cabling/conditioning played a large role in the Scott Walker rooms. These included one of the best-sounding exhibits with VAC Master Signature preamp, VAC Statement 450 mono amps, Magico M2 speakers, MSB Premiere DAC, Aurender W20 server, Acoustic Signature Ascona turntable with TA5000 ’arm and AirTight cartridge, and SonorusATR10 tape deck. This was a large room, perhaps too large for the M2, but it shone nonetheless with transparency, fine dynamic gradations, and intimate micro-detailing.

At the “low” end of the Scott Walker spectrum was the impressive $4995/pr. Elac Adante AF61 floorstanders driven by McIntosh electronics with Blue Sound’s NODE 2i server. This was a terrific system bearing many of the sonic hallmarks of some of the best, with excellent midrange energy and bass slam. 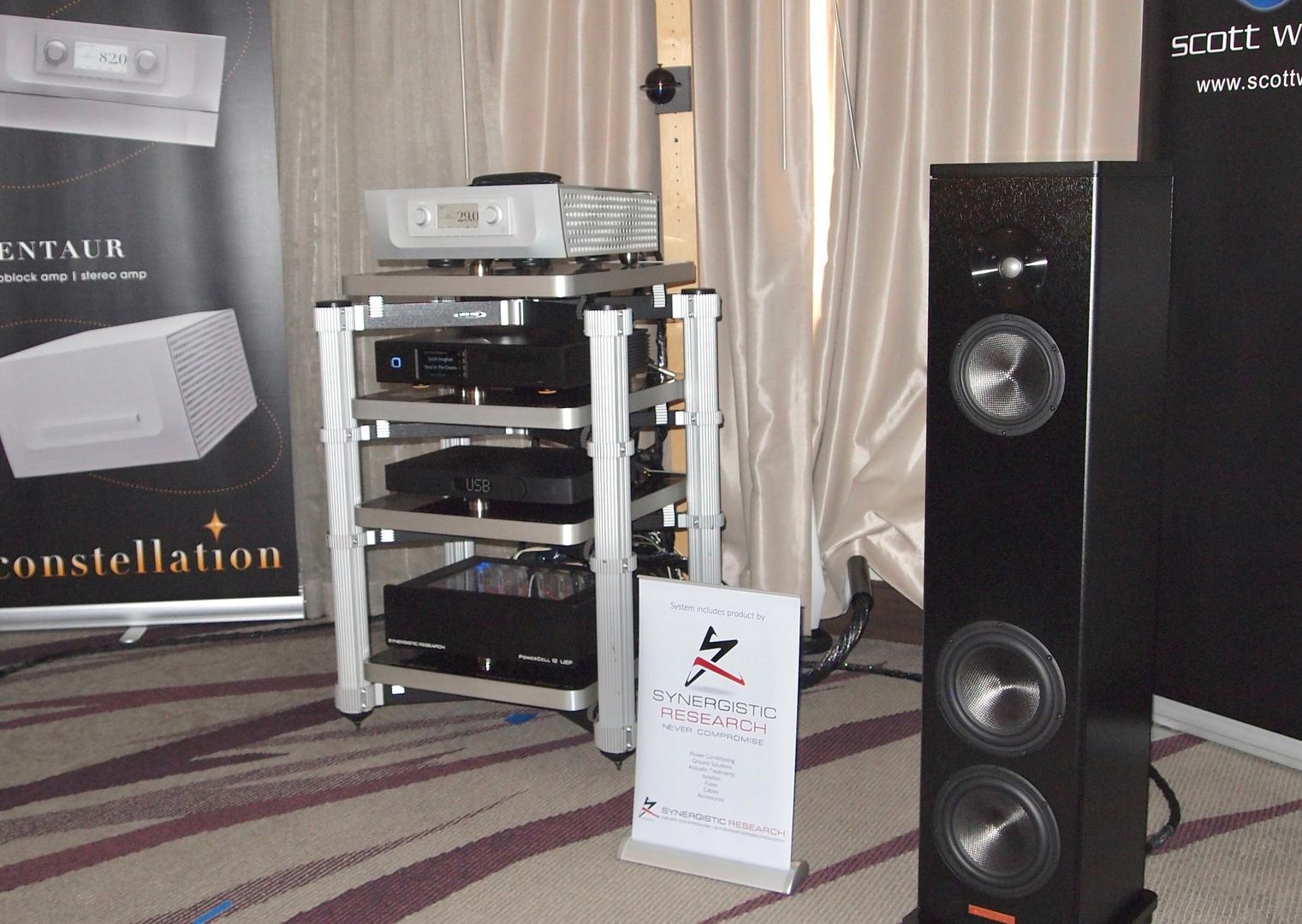 Personally I tend to gravitate to smaller systems, and the Constellation Argo integrated amp ($29k), Magico A3 speakers ($12,300), MSB Discreet DAC ($12.5k), and Aurender ACS10 server ($6k) fit me to a tee. The well-rounded, dynamic, near-full-range sound proved the A3, Magico’s least expensive floorstander, was a full-blooded member of Magico’s esteemed lineup. 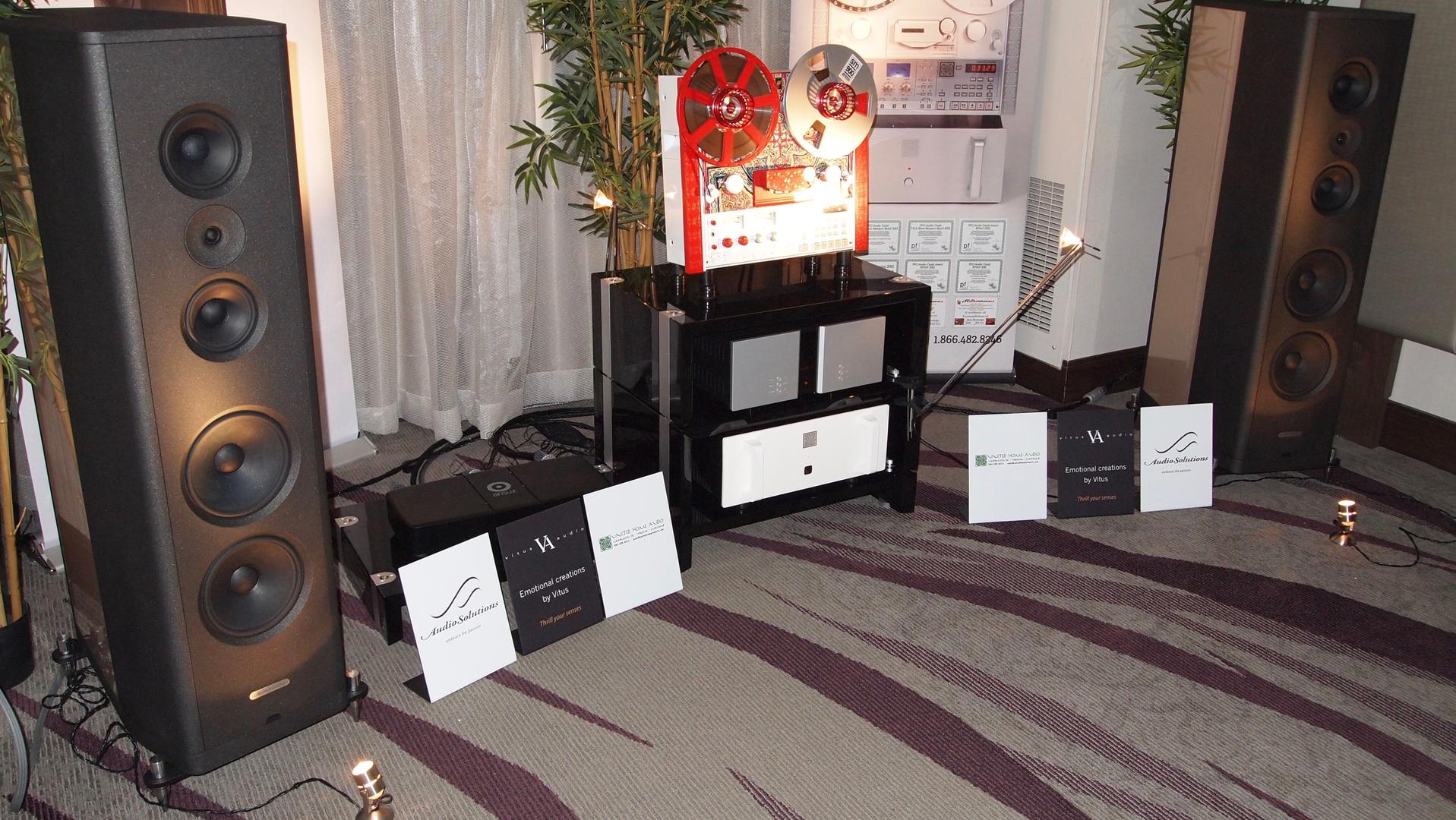 West Los Angeles dealer High End By Oz partnered with United Home Audio to feature the substantial Audio Solutions Figaro L ($10k). manufactured in Vilnius, Lithuania. The Figaro L is a floorstanding, three-way design that features a mini-horn-loaded soft-dome tweeter and a self-locking mechanism on the cabinet corners (no glue is used) to enhance rigidity. The Audio Solutions can be ordered in an astounding 17 different finishes.Filling out the system was United Home Audio Ultima4 OPS-DC tape deck ($30k), a Vitus Audio RI 101 integrated amplifier with optional DAC/streamer module, and Ansuz Acoustics cabling. 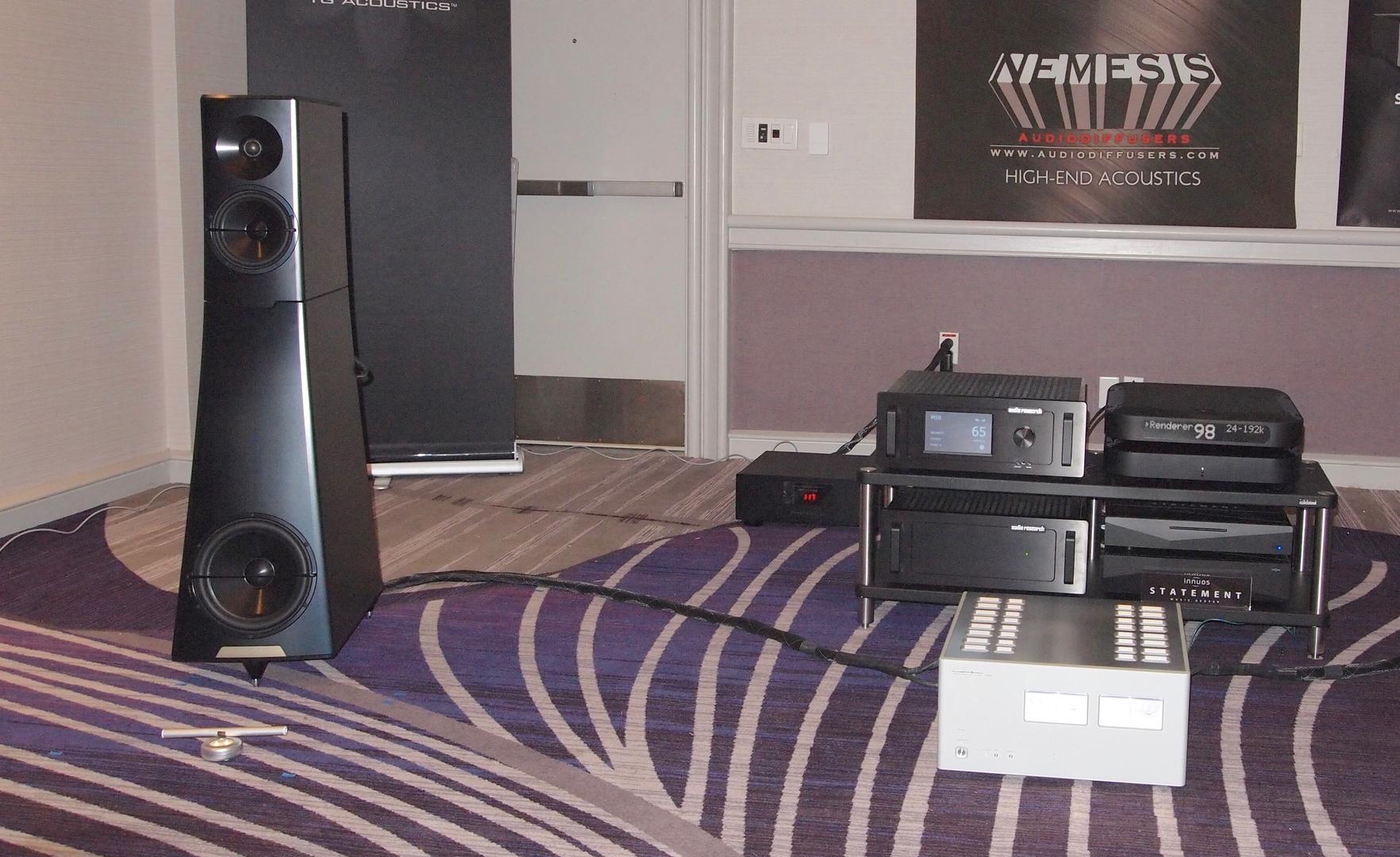 Alma Music and Audio spread its wares over three discrete exhibits, whichincluded my first extended listen to the newish YG Acoustics Hailey 2.2 speaker ($47.9k). Driven by Luxman electronics and an MSB Select II DAC and Innuos Statement music server, this was maybe the best and most balanced YG setup I’ve yet heard. A surprise I didn’t see coming was the Wilson AudioTune Tot. Though the Tots are normally oriented close to a wall, this setup had them perched atop floorstands and paired with a Luxman L-509X, its current range-topping integrated amplifier. An Aqua La VoceS3 and Innuos Zen mini provided source material. While the system was somewhat limited dynamically and cried out for a sub, the inner detail and exquisite imaging and soundstaging really turned my head.

Legacy Audio exhibited three systems built around its bespoke loudspeakers, Wavelet preamp/crossover/DSP, and amplifiers. Especially impressive was the imposing Aeris system ($19,525), richly appealing with its warmth, energy, and low-level detail. I didn’t have an opportunity to hear the Calibre stand-mount, but it looked as if no expense had been spared on this exquisitely crafted two-way ($5500). 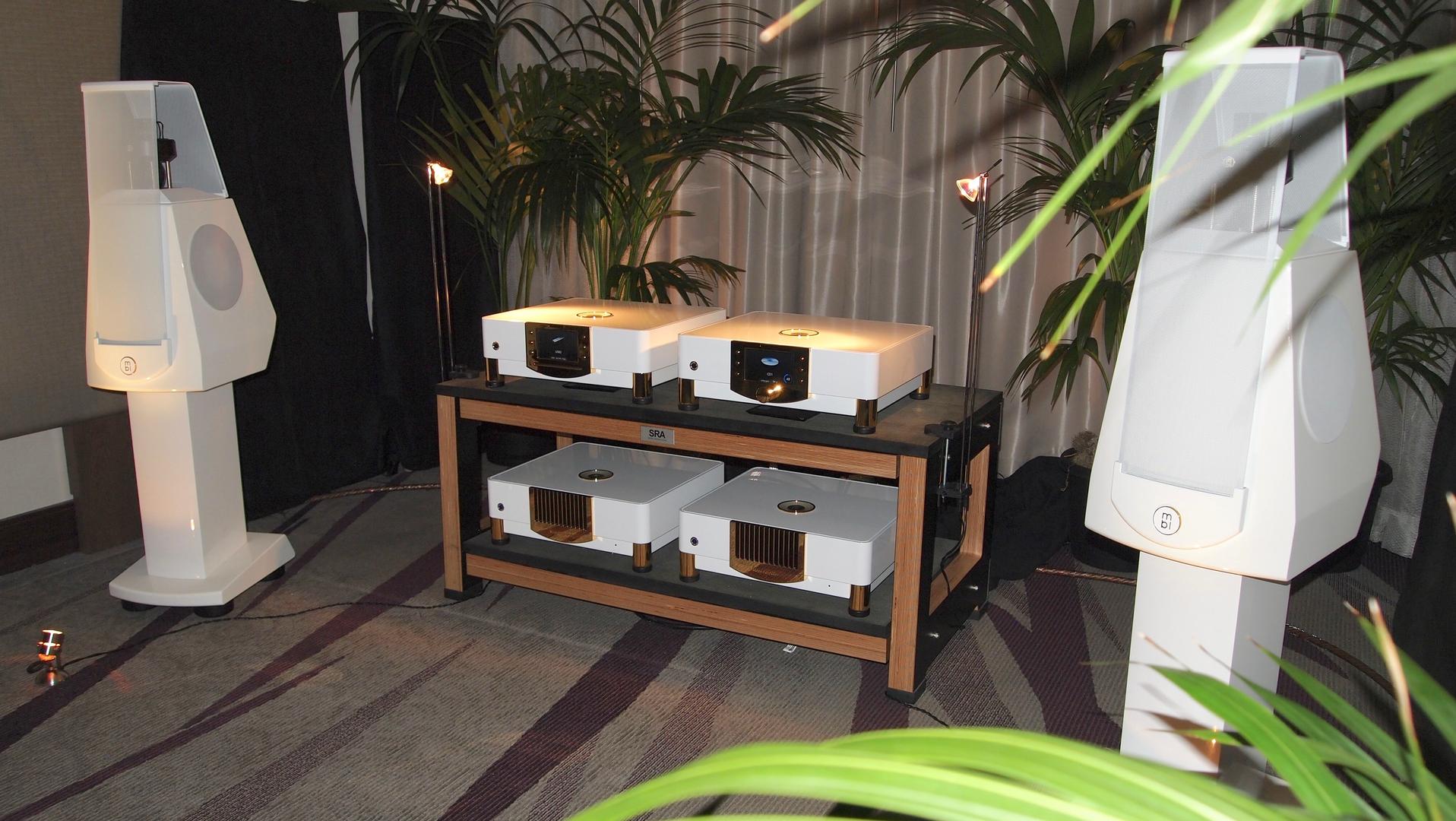 MBL continued doing what it always does, show after show—that is, cornering the market with exquisite soundstaging, ambience, and envelopment, as only its top-flight omni-radiating speakers, in this instance the MBL 120s driven by MBL Noble electronics, can. This level of high performance wasn’t anything that I hadn’t heard before from MBL, but the experience is always fresh. 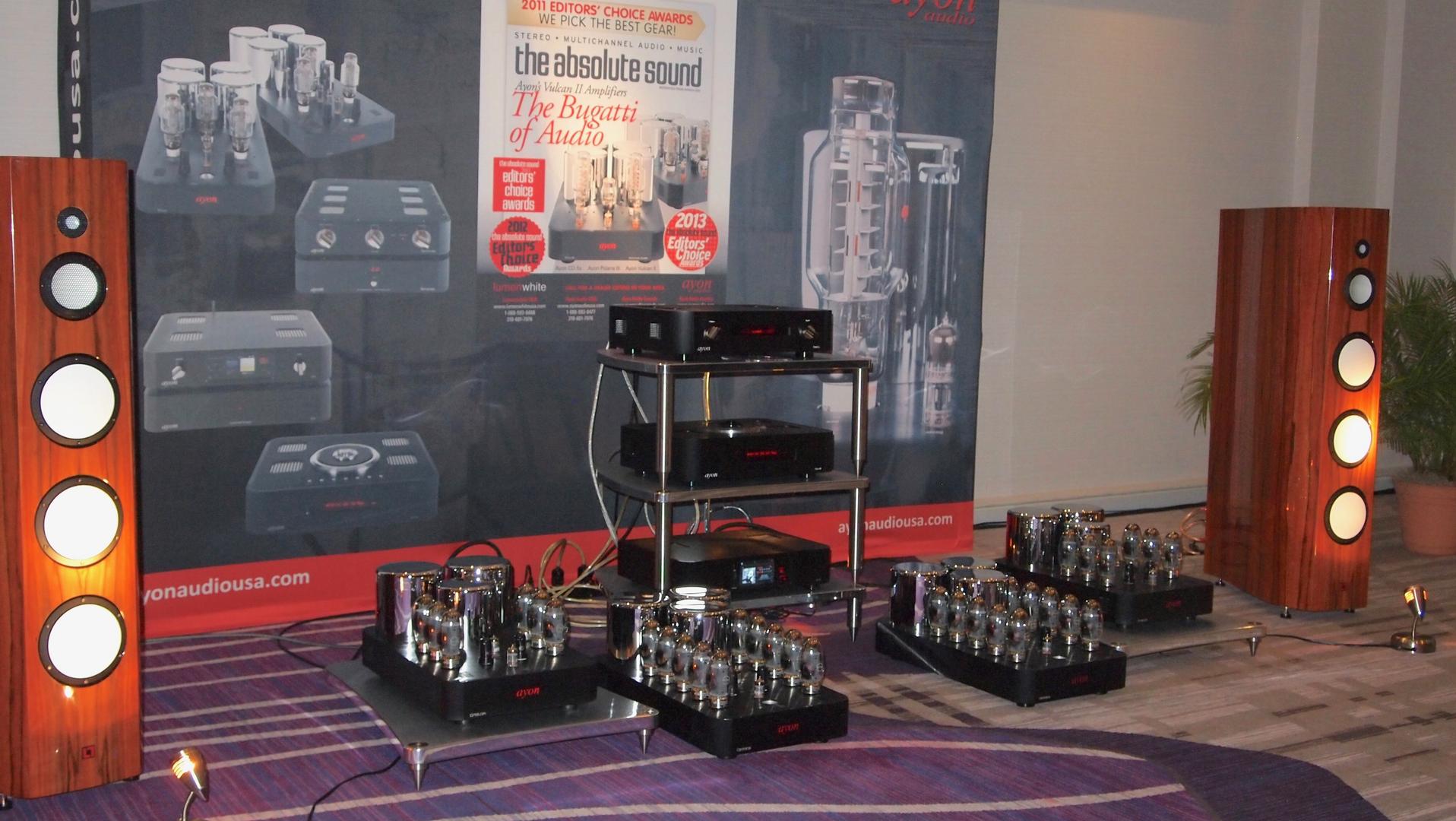 Special mention to exhibitors Steven Norber of PranaFidelity and Dan Meinwald of Helius Designs and E.A.R. USA for putting on some great analog sounds (BS&T’s “Spinning Wheel” never sounded better), at prices within a realm of relative affordability. For me, anytime I hear a robust-performing floorstanding loudspeaker like the Vayu/fs ($8950) paired with sub and $10k electronics and sources I breathe a sigh of relief. Cabling courtesy of Furutech (Elite A/V). Kudos also to the corner-to-corner soundstaging, speed, and clarity of the handsome Lumenwhite Kyara loudspeaker ($49k) driven in concert with an armada of Ayon Audio source and tube amplification.

Noteworthy, too, was my first glimpse of the Kuzma Stabi R turntable ($9595) with CAR cartridge and 4P nine-inch tonearm ($3995). This compact design with an aluminum chassis and various clever armboard and base options for up to three tonearms should be very appealing to vinyl aficionados. And finally, sounding very much like music but tiny in the extreme, was the Swiss-made BoenickeW8 SE ($12.5k). A slender, 30″ tall, four-driver speaker including a rear-firing ambient tweeter and a side-firing 6.5″ woofer, the Boenicke uses a unique two-piece cabinet divided into two halves top to bottom, the interior carefully sectioned and chambered. In other news, Rutherford Audio is now serving as the U.S. distributor for Gold Note of Italy. (I will be reviewing Gold Note’s IS-1000 integrated/DAC in a forthcoming issue.)