The Saxophone in Classical Music

The history of the saxophone in classical music is as old as the instrument itself. The story behind its birth is a colorful one, due in no small measure to the prismatic inventor of this incredibly flexible instrument. Born in 1814 and raised in Dinant, Belgium, the inventor of the saxophone, Antoine-Josef-Sax (commonly known as Adolphe Sax) was the son of Charles Joseph Sax, himself a musical instrument designer who also owned a music instrument factory. Along with inventing the saxophone, Adolphe Sax designed a 24-key clarinet, redesigned the bass clarinet, developed a family of valved bugles which became known as saxhorns (likely leading to the creation of the flugelhorn and euphonium), designed flutes at the age of 15, and contributed to the designs of other instruments such as the bassoon and the tympani. His work in acoustics was widely praised, and his acoustical studies led him to propose a concert hall design influenced by the parabolic form (early saxophones were  parabolic cones, while modern saxophones are conical). He even patented a most improved train whistle!

Sax, who was part of a large family, experienced an abundance of hard knocks, his misfortunes characterized by numerous serious business (and health, social, and political) difficulties, including bankruptcies. He was accused of stealing the idea of the saxophone from others; trouble seemed to follow him, and he faced serious competition from other music instrument makers. However, Sax also experienced successes. For example, the eventual inclusion of the saxophone in military ensembles proved extremely noteworthy, and prior to moving to Paris in 1842, Sax’s introduction to the influential French music critic-composer-conductor-author, Hector Berlioz, was a crucial turning point.

When compared to the other standard orchestral instruments, all of which evolved over great periods of time, the saxophone is arguably an actual invention. While various dates of inventions appear in numerous sources, documents suggest that the invention date to be as early as 1838. It is likely that it was Berlioz who first described the saxophone in print in a series of articles he began in 1841 for the Revue et gazette musicale. Berlioz mentioned a new instrument of Belgian Adolphe Sax, describing the sound of this instrument as “beautiful.” This article referenced the brass wind “ophicleides” fitted with a clarinet-like mouthpiece (versus the typical brass-like mouthpiece). Berlioz did not use the word “saxophone” in his article. It is possible that Berlioz simply was oblivious of the name of this new instrument; it is also possible that Adolphe Sax had not actually yet named this instrument. There is no question, however, that Berlioz, who often referred to Adolphe Sax in his writings/letters, proved to have an enormous impact on the successes of Adolphe Sax. They became “bons amis.” 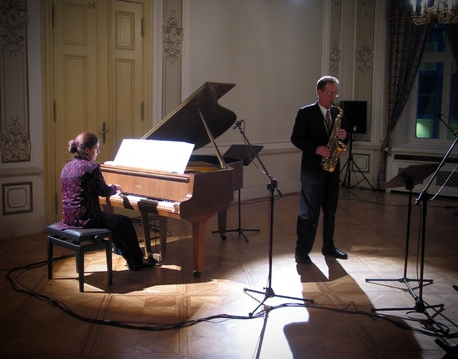 Consistent with numerous sources, it is clear that Sax intended the saxophone to serve as an improved bass orchestral instrument. The saxophone was to provide human voice-like flexibility, the agility of other woodwinds, and power in the province of brass instruments. It should come as no surprise, then, that the earliest original saxophone was a bass saxophone in the key of C. It is highly likely that the first performance that included the saxophone was in 1844. The work? A chamber arrangement of a choral work titled “Chant sacré.” The composer? Hector Berlioz. The conductor? Hector Berlioz. And the saxophonist? None other than Adolphe Sax himself. The first orchestral use of the saxophone can be traced to an 1844 opera, Le dernier roi de Juda by Georges Kastner, in which a bass saxophone in C was scored. Interestingly, the first influential American to have performed solo saxophone music with an orchestra in a concert hall was a woman, Elise Hall (1853–1924). She commissioned numerous composers to create saxophone works for her, the most famous being Claude Debussy.

Ultimately this instrument that Adolphe Sax invented proved quite versatile. Popular in rock, rhythm and blues, and funk, the saxophone has become one of the most important instruments in jazz. In the classical world, Rachmaninoff, Ravel, Bizet, Berg, Shostakovich, Prokofiev, Ibert, Britten, Debussy, Villa-Lobos, Penderecki, Milhaud, Glazunov, and George Gershwin are just a few of the composers who wrote music for the instrument. Some classical works employ the saxophone as a solo instrument in settings that include orchestra, wind band, and piano; some use the saxophone (or saxophones) as an orchestral voice, often featuring the instrument prominently as a solo voice (the stunningly beautiful saxophone solo in movement one of Rachmaninoff’s Symphonic Dances comes immediately to mind); and some integrate the saxophone into various chamber music settings (Webern, Villa-Lobos, Milhaud, Warren Benson, for example). The number of classical saxophone works keeps growing, and those interested in exploring that tradition might wonder where to start. What I offer below is a foundation for those who are interested in the saxophone’s role in classical music but do not know much about it. These are examples of compositions that are highly regarded and well recorded. The composers, as well as saxophonists who perform these works, all owe an authentic debt to Adolphe Sax.

Frenchman Jacques François Antoine Ibert (1890–1962) studied at the same school where the first professor of saxophone taught (yes, that would be Adolphe Sax), the Paris Conservatoire. His Concertino da camera for solo saxophone and 11 instruments (sometimes performed with a slightly boosted string section), written 1935–36, remains to this day one of the composer’s most frequently performed works. Ibert’s eclectic styles are on vivid display in this virtuosic work, including good humor and frivolity, as well as a beautifully lush slow section (the first part of what is effectively the third and final movement). Numerous recordings of the Concertino are available, one of which is included on saxophonist Nobuya Sugawa’s self-titled 2008 Chandos release with the BBC Philharmonic Orchestra (Yutaka Sada, conductor). The effortless delivery of this light, virtuosic work is exceptional.

Alexander Glazunov (1865–1936), the Russian composer-teacher-conductor-conservatory director, wrote two significant works for the saxophone: a monumental saxophone quartet for soprano, alto, tenor, and baritone saxophones, and the Concerto for Alto Saxophone and String Orchestra (in E-flat Major, 1934). Cast in one large movement, the concerto is divided into distinct sections (versus individual movements). This format suggests a rhapsody of sorts. As the title specifies, the orchestra solely consists of strings (no winds, no percussion). Included on The Art of Saxophone and released in hybrid multi-channel SACD by Arts in 2009, this recording features Mario Marzi as soloist, with the Orchestra Sinfonica di Milan GiuseppeVerdi (Hansjorg Schellenberger, conductor). The recorded performance seamlessly manages the multitude of tempo changes and abundant use of rubato.

One of many composers who eventually immigrated to the United States due to hostility towards Jews, the German-born Ingolf Dahl (whose birth name was Walter Ingolf Marcus) contributed what remains an undeniably breathtaking saxophone concerto. A frequent revisionist of his own music, Dahl revised this three-movement work in 1959. Saxophonist Jorgen Pettersson, with David Porcelign conducting, recorded a moving interpretation of the concerto on the 1992 Caprice release (Digital Download) titled Stockholm Symphonic Wind Orchestra. How very interesting that a composer who has been described as a blend of Stravinsky and Hindemith, who served on the faculty of the University of Southern California, who was awarded a Guggenheim Fellowship and, among others, the ASCAP Stravinsky Award…how very interesting—wonderful, really—that Dahl also served as arranger and musical conductor for Victor Borge.

Born Giuseppe Guttoveggio in New York City to Italian immigrants, the Italian American composer who became known as Paul Creston (1906–1985) wrote several works for saxophone. These include, among others, a concerto, a rhapsody, a saxophone quartet, and the highly admired Sonata for Alto Saxophone and Piano, Op. 19 (1939). Just as Creston’s obsession with rhythm is demonstrated in his book Principles of Rhythm, his saxophone sonata serves as a brilliant vehicle for overt rhythmic diversity. Examples of this include frequent contrasting implied meters in the saxophone, piano right hand, and piano left hand…simultaneously. The second movement is noteworthy not just because of the simple beauty of the melodies, but because the composer wrote movement two in 5/4 meter. Creston did so quite skillfully, however, as this relatively unusual slow movement meter never detracts from his “with tranquility” marking. Included in a 1994 Globe release titled Saxophone Sonatas, this highly appealing work is most convincingly recorded by saxophonist Arno Bornkamp and pianist Ivo Janssen.

A more recent but extraordinarily passionate work is the Sonata for Alto Saxophone and Piano written in 1984 by William Albright. A work of nearly 19 minutes in length, the range of emotions and diversity of musical styles is staggering. This writer is proud to be one of three saxophonists for whom the work was written, and in that regard modestly notes its inclusion on the 2009 ACA Digital Recordings CD and Digital Download release titled Passions Large & Small, with the writer as saxophonist and Walter Cosand as pianist. While not the only work Albright composed for the saxophone, this sonata is indeed a masterpiece.