No reflection on Parasound, but they’re one of those US companies that I’ve been aware of for years without really knowing anything about them. Founded in the 80’s, their amps have a reputation for providing plenty of bang for your buck, combining solid engineering with realistic pricing. Bearing that in mind, my expectations of the JC1/JC2 combination were along the lines of ‘typical heavy weight American power amplification’, where theoretically impressive output capabilities would be design criteria number one, accompanied by a pre-amp that would (as so often seems to be the case) constrict the performance of the system. A little bit cynical I know, but having recently lived with exceptional and hideously expensive amplification from the likes of Dartzeel, Ayre and Goldmund, I guess I was preparing to come down to earth with a bit of a bump. But straight out of the box, the Parasound amps showed just how wide of the mark my preconceptions were. Indeed, with the passing of a few weeks in which they settled down and burnt in, I found myself increasingly impressed. Feeding the fussy and highly revealing Marten Byrd loudspeakers, the JC amplification had no trouble filling the void left by its illustrious predecessors.

I might be forgiven for my less than flattering assumptions by the fact that the Parasound looks far more mainstream than something from the tweaky, high-end sector, and it comes as no surprise to learn that the Californian based company has its products assembled in Taiwan. The curved front panel and silver finish provide a degree of visual identity and help to disguise the fact that the power amps in particular are actually very large boxes, while the wrap around casework of the pre amp feels a bit tinny. But elsewhere the construction is reassuringly solid. If the external appearance could be described as a little bit ordinary, it certainly flatters to deceive. Internally the Parasound units are a completely different story.

Let’s start at the beginning; the circuitry for these amps was developed by John Curl, one of the most respected designers in high-end audio, with products like the almost legendary Vendetta pre – amp and the original Mark Levinson JC1 pre-amp to his name. Modest about his achievements, he attributes a lot of the success of Parasound’s flagship Halo range to his partnership with Carl Thompson and Bob Crump, responsible for layout and component selection respectively, while the long-term association with the company since 1989 has obviously been a fruitful one. The result is a design that has no capacitors or inductors in the signal path, carefully selected components and a layout that has been optimized to ensure minimal interaction between the crucial elements.

The JC2 offers six line-level inputs, two of which can be switched for balanced operation, while outputs consist of tape, balanced XLR and two single-ended RCA, one of which gives an inverted signal, offering an elegant and useful method of bridging stereo power amps. Front panel controls are minimal; a large volume knob is augmented by individual trim for channel level rather than a balance control, while push buttons select input source and standby.

There is no power switch; plugging the unit into the mains initiates a 45 second mute (indicated by a flashing LED on the front panel) to allow the circuitry to stabilise and subsequent operation of the standby switch brings the unit to life after a period of a few seconds. Internal layout is extremely neat; separate boards carry audio circuitry for the left and right channels and are mounted close to the rear panel to allow a very short signal path. These are shielded from the rest of the amplifier by substantial slabs of 3/8” aluminium, and all switching is carried out via high quality relays. Another two boards deal with remote control functions and the volume control(s), which are of the blueAlps type. The complicated power supply is fed from two transformers: a conventional device supplies current to the ‘housekeeping’ circuitry while a high quality R core design, selected for its superiority over the more common torroidal type in terms of blocking mains bourn noise and interference is used to supply the audio circuitry. The remote offers all of the pre-amp functions plus a polarity invert button, and while not from the “hewn from solid” school, works effectively enough over a decent range.

The JC1 power amplifier has been Parasound’s flagship since 2003, and is a bit of a monster. With a rated output of 800 into 4 Ohms, rising to 1.2 kilowatts into two, available peak current capability is a scary 135 Amps, provided by no less than eighteen high power Sanken output devices selected for their speed and ruggedness. Input and driver stages are based around J-FET’s and MOSFET’s respectively. John Curl feels that this topology offers the best of both worlds and allows the earlier stages greater immunity from the loudspeaker load. They are fed from individual power supplies based around the massive potted (and extremely quiet) torroidal mains transformer. Similar in looks to the JC2 pre-amp, the construction is reassuringly solid, the two sides being taken up by substantial heat sinking, necessary because the Parasound produces the first 25 Watts of its output in class A. Even under quiescent conditions the unit runs quite hot, enough to raise the ambient temperature in my listening room by a few degrees – not entirely unwelcome during what promises to be a very average British summer. But if it proves too much or there is insufficient space for good ventilation, a switch on the rear provides the option of reducing the bias to a nominal 10 Watts of class A to allow cooler running. The amplifiers are protected against misuse and potential faults by both fuses and a non-intrusive relay that disconnects the speakers in the event of a fault. Two sets of four-way binding posts together with balanced and singleended inputs are provided, while both the JC1 and 2 have all the prerequisite 12 Volt trigger arrangements for remote turn on and use with AV systems. Also worth mentioning is the ‘music sense’ facility on the power amp which has adjustable sensitivity, a useful feature for the lazier amongst us – and with all that class A dissipation, a much healthier option for the electricity bill. The power amps seemed to come on song relatively quickly, stabilising their performance after twenty minutes or so, while the JC2 was left running continuously. 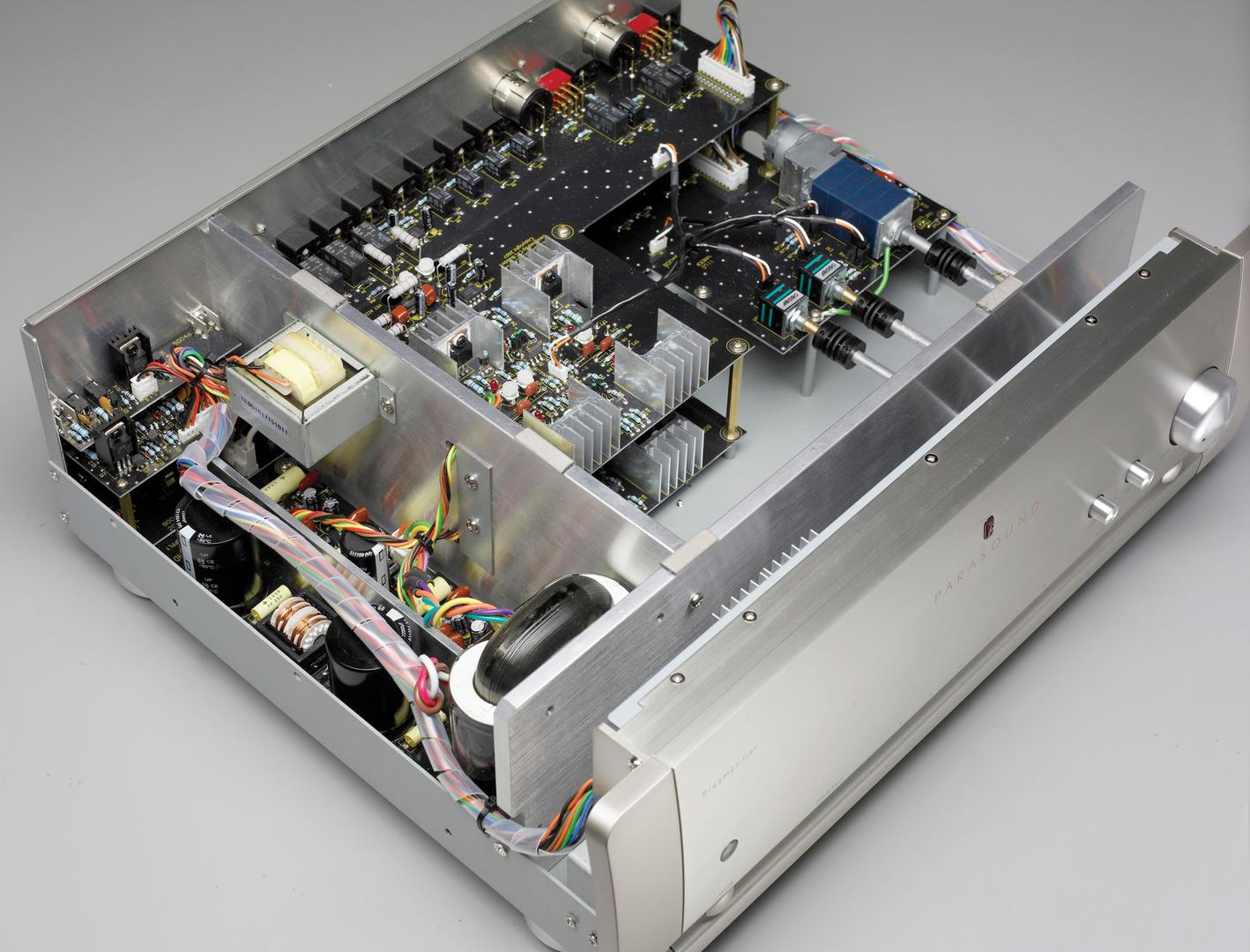 From an already auspicious start things just got better and better. Over a period of a few weeks the Parasound combination underwent some subtle, and some not so subtle changes and I’m not entirely sure, two-months down the line, that it has finished burning in. While it became looser in terms of opening up and allowing the music to flow with greater freedom, simultaneously I was aware of a ‘tightening up’ of snap and timing, while bass cones seemed to be held in an increasingly visceral grip – there’s nothing quite like a few kilowatts of solid-state power to put your bottom end in order. With both the Spendor SP100R and the Marten Byrd, ported designs with good bass extension, the authority, slam and resolution at lower frequencies was quite spectacular, reminiscent of the bigger Bryston amps that I hold in such high regard in this respect. All that effortless precision was able to un-muddle the most complex of bass lines, and endow well-recorded drums with real impact and energy. There is often a tendency for large power amps to sound ponderous and earthbound, but this is not the case with the JC1s, where there is an impressive speed that contributes to the tactile quality, and little smearing of the impressive amount of detail that was on offer. Voices and instruments had a good sense of body with a fine balance between weight and agility. The higher frequencies showed a slight loss in definition, with a hint of softness leading to a definite ceiling, rather than giving the illusion of limitless air in the way that the Goldmund amplification seemed to manage so well. Never unpleasant, there was just the odd occasion where the extreme top-end had a slightly ‘velvety’ quality to it, noticeable in particular with the sometimes ruthless but highly revealing diamond tweeter used in the Marten loudspeakers.

As for sound staging, I’m not entirely sure what the connection is between the low-end performance of a system and the ability to produce three-dimensional images, but the presence of well-defined LF information helps delineate the boundaries of acoustic spaces and what is contained within them, and the Parasound certainly proved the point. Live recordings had a palpable sense of contained space, with individual performers projected well away from the speakers with a reassuringly solid presence that had good dimensionality and solidity to them. 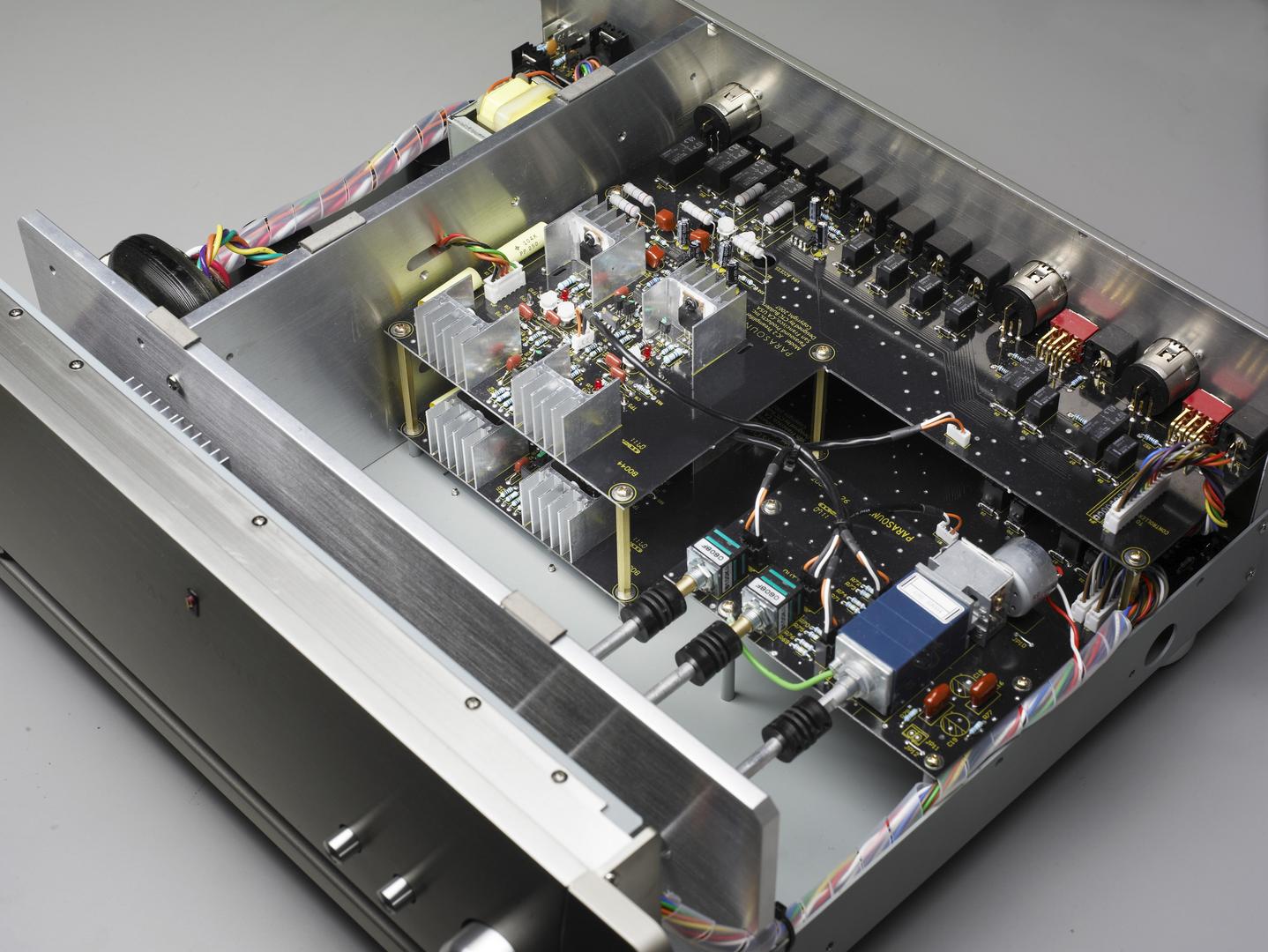 A lot of the above observations would seem to relate to the JC1 power amps and their interaction with the loudspeakers, which begs the question as to just what the pre-amp was contributing to the whole? The pat answer is, “not very much at all” – but that seriously underestimates its quality. The JC2 left no noticeable imprint on the musical signal, but perhaps more importantly, didn’t seem to be holding anything back, a welcome realization in a world where so many line-stages act as serial stranglers. Compared to the Audio research SP10 that I sometimes use the JC2 had better resolution, a wider bandwidth and sounded more neutral, emphasising the slightly rich ‘spongy’ character of the aging valve design. The Goldmund Mimesis 28.3 could not have been more of a contrast, providing an exceptionally clean, etched and occasionally academic presentation against which the Parasound offered a slightly richer character, but gave little away in terms of resolution. But it was while I was using The Naim NAP300 power amplifier that I began to realise just how effective the JC2’s balance of virtues really is. Inherently quiet, it is capable of presenting detail with both texture and precision while simultaneously sounding open and airy, the combination of which offers a highly lucid and musically enthusiastic performance.

As a system, the JC1/2 pre-power combination works extremely well, and goes way beyond simply providing lots of amp for the money. Standing direct comparison with some seriously capable (and expensive) competition. What it actually provides is genuine high-end performance at a very reasonable price. If you need lots of drive, the JC1’s have it in spades, whilst avoiding most of the compromises that usually accompany really powerful amplifiers. As an alternative to spending more, invest the extra money on having a dedicated mains spur installed, and the Parasounds will reward you with even better performance.

Which brings us to the JC2 linestage. It’s becoming increasingly obvious how few pre-amps succeed in passing a musical signal without imposing crippling constriction in the process – and those that can are invariably expensive. Well, you can add the JC2 to that (very short) list of the great and the good.

At the asking price, that makes it a genuinely astonishing bargain – especially if you don’t need the awesome power delivery of the JC- 1s and team it with something more manageable and affordable from further down the Parasound range. As flagship products, this pre-amp and its matching mono-blocs succeed handsomely. They represent a really impressive accomplishment that John Curl and Parasound can be justifiably proud of – just as proud as those lucky enough to own a set. In an industry where the term “value” seems to have taken on an almost comical elasticity, the JC1 and JC2 are definitely the real deal – in every sense.