That’s how I’d describe the third installment of T.H.E. Show Newport Beach. Attendance was ample if not overwhelming and as if cued by the nearby Pacific ocean attendees tended to arrive in waves moving between the Hilton and Atrium Hotels. However it was a mellower energy, perhaps a jet-lag hangover from Munich just a couple weeks earlier? My beat was electronics and although the show featured few genuine premieres or surprises here’s my snapshot of highlights.

Right out of the box was a strong contender for Best Of Show. (See Above Pic) Featured in the room of local dealer Optimal Enchantment was, surprise, all Audio Research electronics. They included the newly minted ARC Ref 10 preamp ($30k) and Ref Phono 10 twin-chassis phono stage, both outfitted with large and highly configurable touch screen controls ($30k).  The analog playback source was Basis Audio’s  Work of Art turntable with its companion Superarm 9 tonearm and Lyra Atlas cartridge­–a statement product if ever there was one. Driving the  Vandersteen 7s  were ARC Ref 250 mono’s linked with AudioQuest cabling. Even a well worn treasure like Dave Brubeck’s “Time Out” seemed anew through this easy going, yet seamless and superbly resolved system. I kept sticking my head into this room throughout the show.

In a return engagement to American shores are former Plinius designers Gary Morrison and Ross Stevens with a new all-Kiwi line called Pure Audio, distributed by Colleen Cardas Audio.  These mates have been at this new venture since 2008 and are now poised to have another go at the US market.  The line currently features the Vinyl Phono Pre at $4500,  the Control preamp at $9500, and 65Wpc pure Class A Reference monoblocks are$15.500/pr. To come are an integrated and stereo amplifiers. The stunning industrial design combines  strapping aluminum accents with a  stainless steel mesh chassis. Only the phono stage was represented at Newport but with their track record, Pure Audio should be something to watch in the next few months.

Newport was the West Coast premiere of the Audience Wavepower monoblock amplifier.  Audience, known for its cabling and more recently one-way loudspeakers, this small footprint powerhouse is based on N-core technology by Hypex and outputs a weighty 400W into 8 ohms and up to 1200W into 2 ohms. Boasting a high efficiency of 93% at full power it incorporates built-in Audience power conditioner technology. ($18k including Au24 SE power cords) and linked with (what else?) Audience Au24 cables. It was hard to gauge the full potential of the amps given the pristine but limited bass output from the diminutive Audience 1+1 loudspeaker but my guess is that there is a lot of potential here. 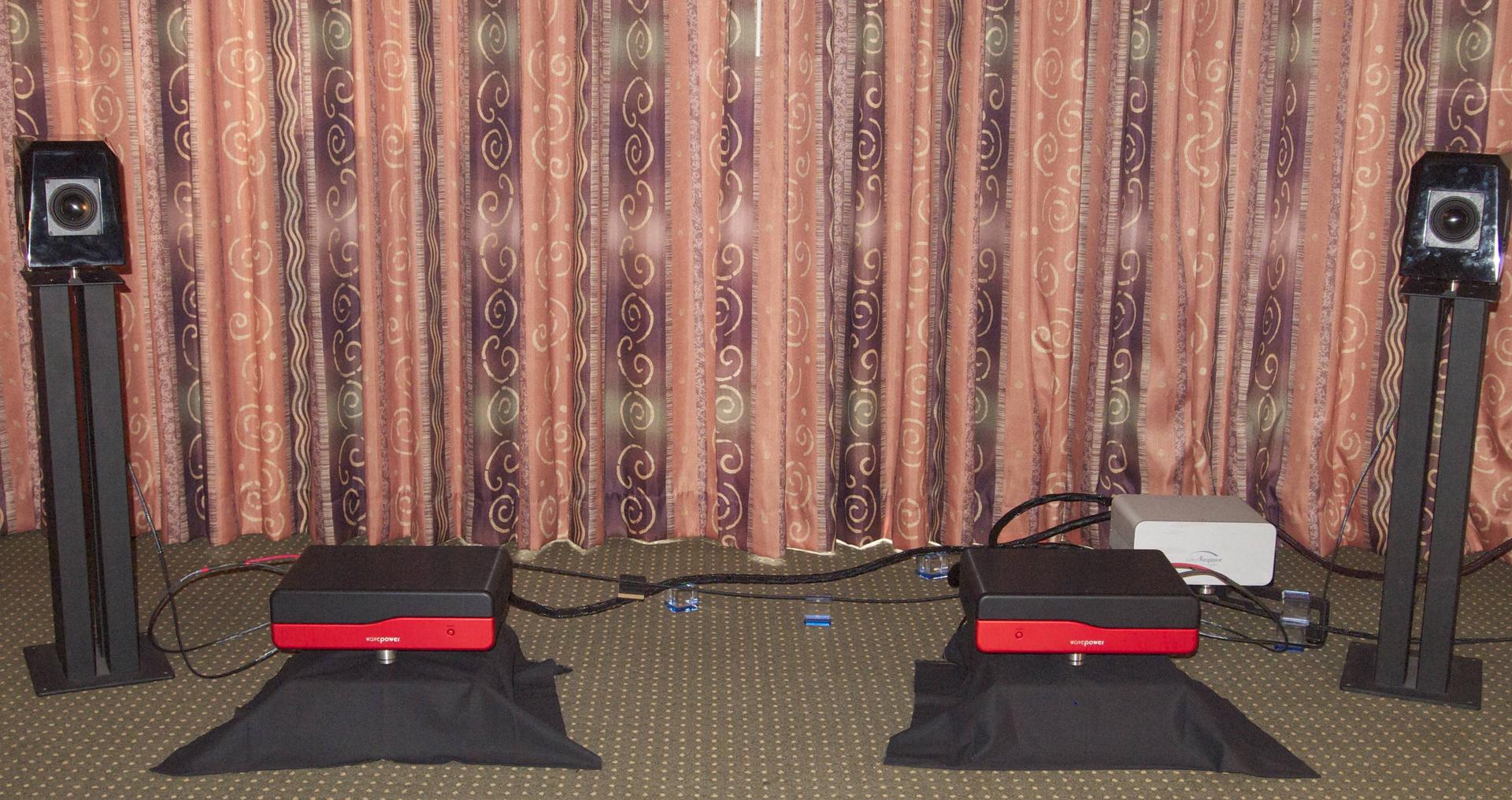 In my favorite “I told you so” exhibit, Pioneer (see pic below) gave attendees a clinic in budget audio synergy with the Elite N-50 media player/DAC ($699), Elite A-20 50Wpc integrated amplifier $299) and TAD maestro Andrew Jones’ designed SP-BS22 loudspeakers.($129/pr) which I reviewed last year. That’s right, 129 bucks, NOT a misprint. For the small room or den this system had the midband tonal balance that many systems priced multiples higher only dream about. 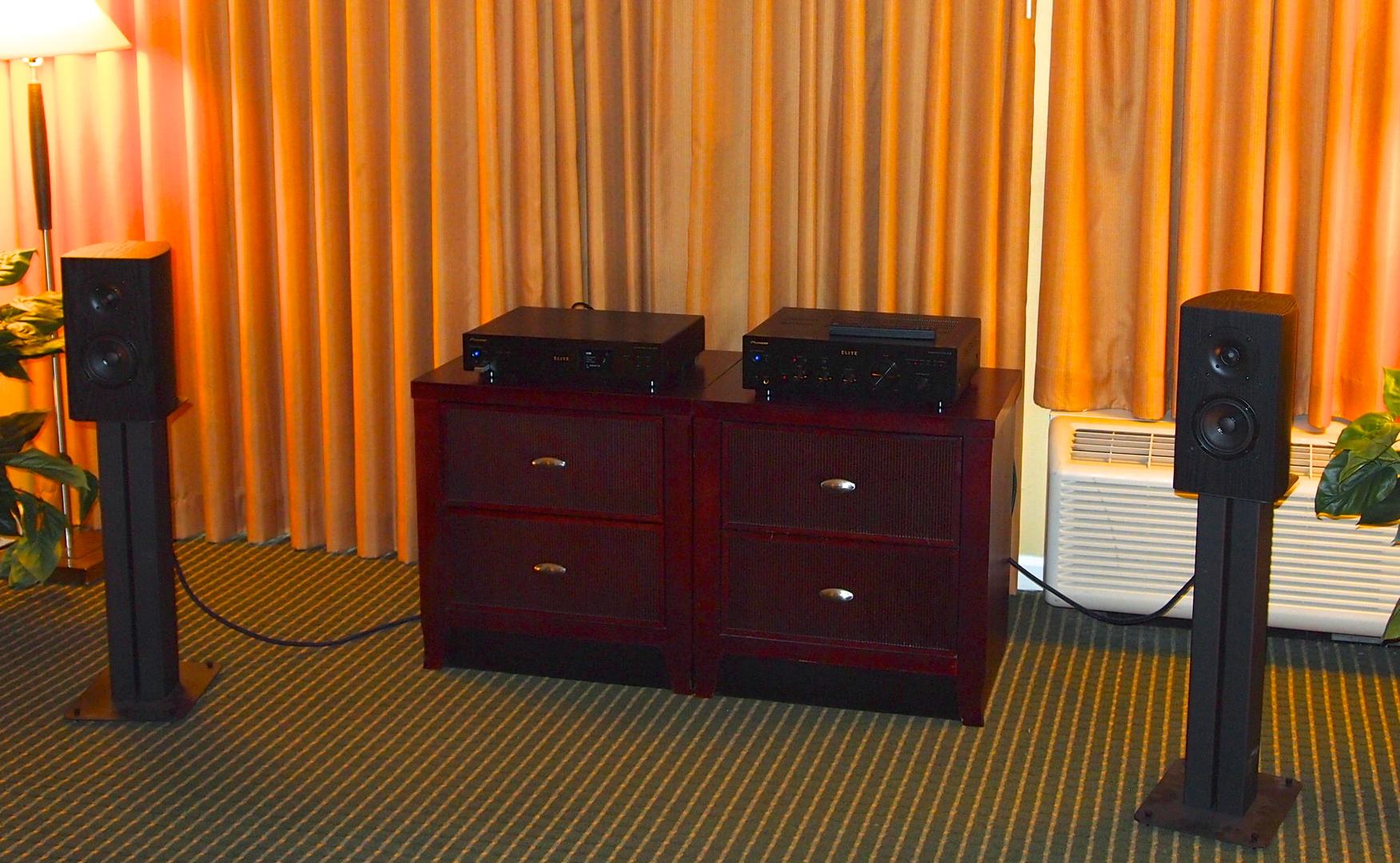 Fresh off its debut in Munich, Rowland’s 525 stereo amp, a Class D design,  outputs a hefty 250 Wpc into 8 ohms 500Wpc into 4 Ohms.  In the Lawrence Audio room, it was driving  the Lawrence Cello floorstander with the Air Motion Tweeter through Nordost cabling.  For this setup, Rowland was running a pair of 525’s in bridged mode, each outputting a whopping 950W into 8 ohms an amazing figure from the pint sized chassis. Pricing is $4500 each with the customary Rowland fit and finish, which is to say, simply, unreservedly gorgeous. 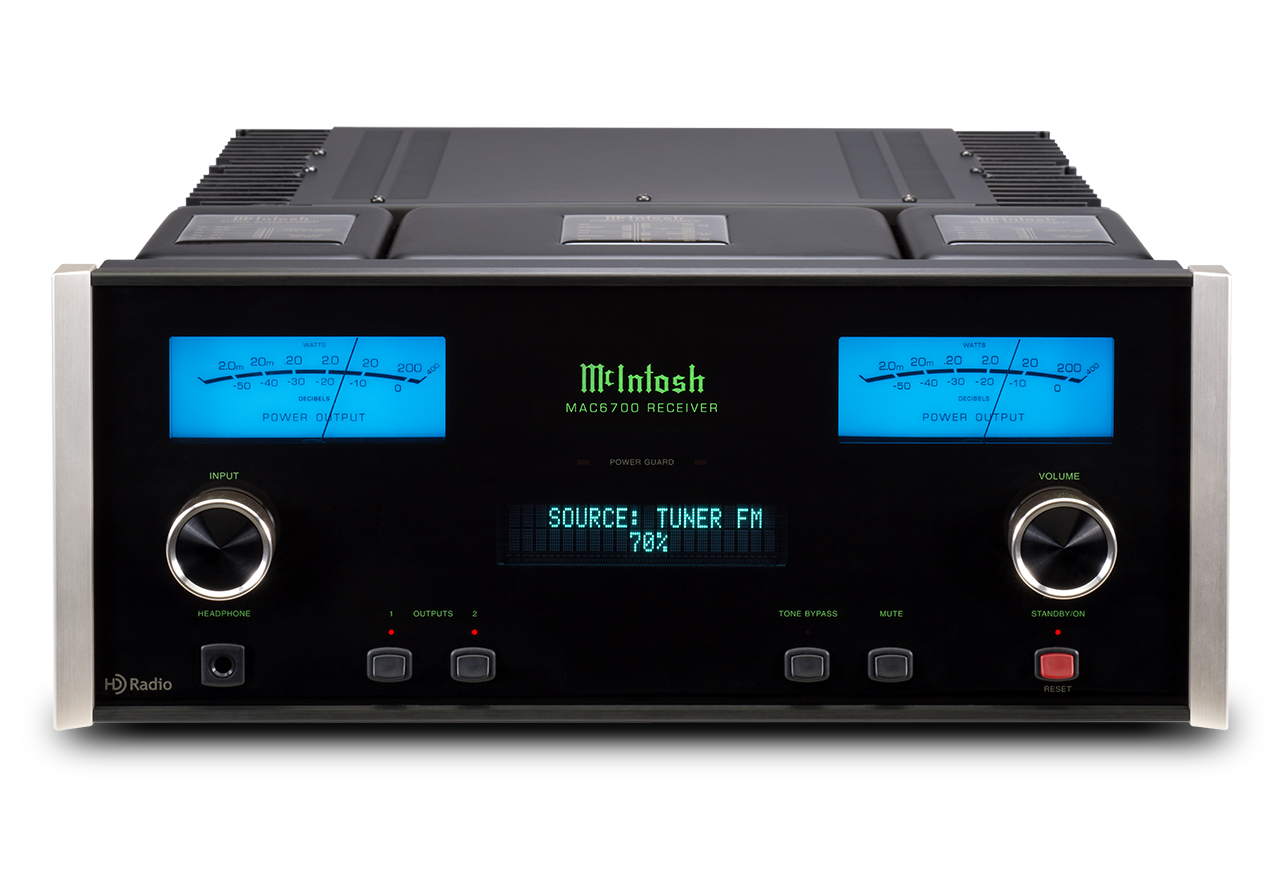 I can’t recall the last show that industry legend McIntosh failed to send a fresh-out-of-the-oven product.  This time is was a receiver, the MAC6700200Wpc, $6500. (see above pic) No scrimping on features it has AM/FM tuner with HD Radio tech, and tons of presets. The preamp section contains 11 inputs including three digital with decoding up 32-bit/192kHz resolution. Also two dedicated phono sections, MM and MC, a theater bypass. It’s 200Wpc and utilizes Mac Autoformer tech plus its new High Drive headphone amplifier said to be optimized for gain and output to handle virtually any headphone.

Newport afforded me my first extended listen to MBL’s Corona C-15 monoblocks $25k/pr. The C-15 represents designer Jurgen Reis’ take on Class D power but like I discovered last year with other models in the Corona line, these designs are simply not freighted with darker, leaner signature of early Class D, thanks at least in part to Reis’s load independent, Linear Analog Switching Amplifier Design (LASA). During Peter Gabriel’s “Mercy Street” they effortlessly powered the mbl 111 F Radialstrahlers ($42k), and like waving a wand out poured the omni-magic sonics MBL is renowned for. 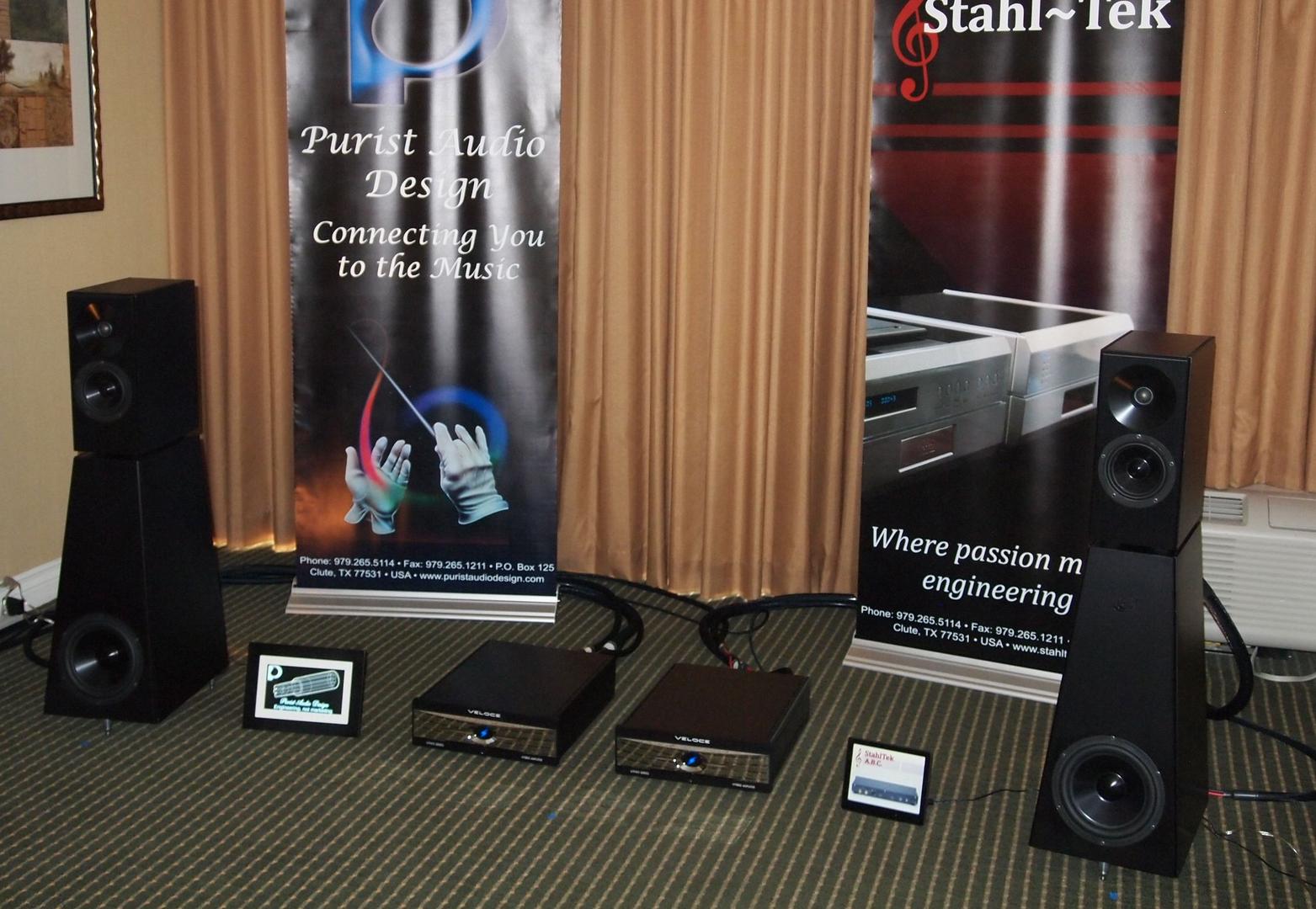 The YG Acoustic Kipod II Signature (see above pic) sounded particularly good at this show but I’m figuring  some of the credit is due the Veloce Audio battery powered electronics, specifically the LS-1 linestage ($18k) and Saetta Tube/Solid State Hybrid  Mono Amps $18,000/pr. With the Stahl Tek Ariaa DAC playing back Reference HRx files and cabling courtesy of Purist Audio Corvus the sound was smooth, controlled, effortlessly dynamic and balanced and lacked the sparkling edge that I sometimes noted in earlier YG. Also highly favorable was my impression of the YG Sonya driven by Tenor gear in another strong exhibit.

In a change of pace for VTL, the well regarded tube amp company from Chino, California was featuring its TL-7.5 Series III Ref and MB-450 Series III Sig amps driving the sumptuous Sonus faber Amati Futura $36k rather than the Wilson and TAD speakers they’ve so often partnered in the past. More than ably assisted by a dCS Vivaldi digital source and Grand Prix Audio Monaco table with Triplanar arm and Lyra Skala cart with Cardas Clear and Clear Beyond (is there such a thing as beyond clear?) the sound was in some ways ­classic Sonus, with its hint of darker shadings and romance– yet in other ways there was the glint of finer resolution and inner detail and an energetic tingle of micro dynamics that more accurately characterizes where these companies are at in 2013. 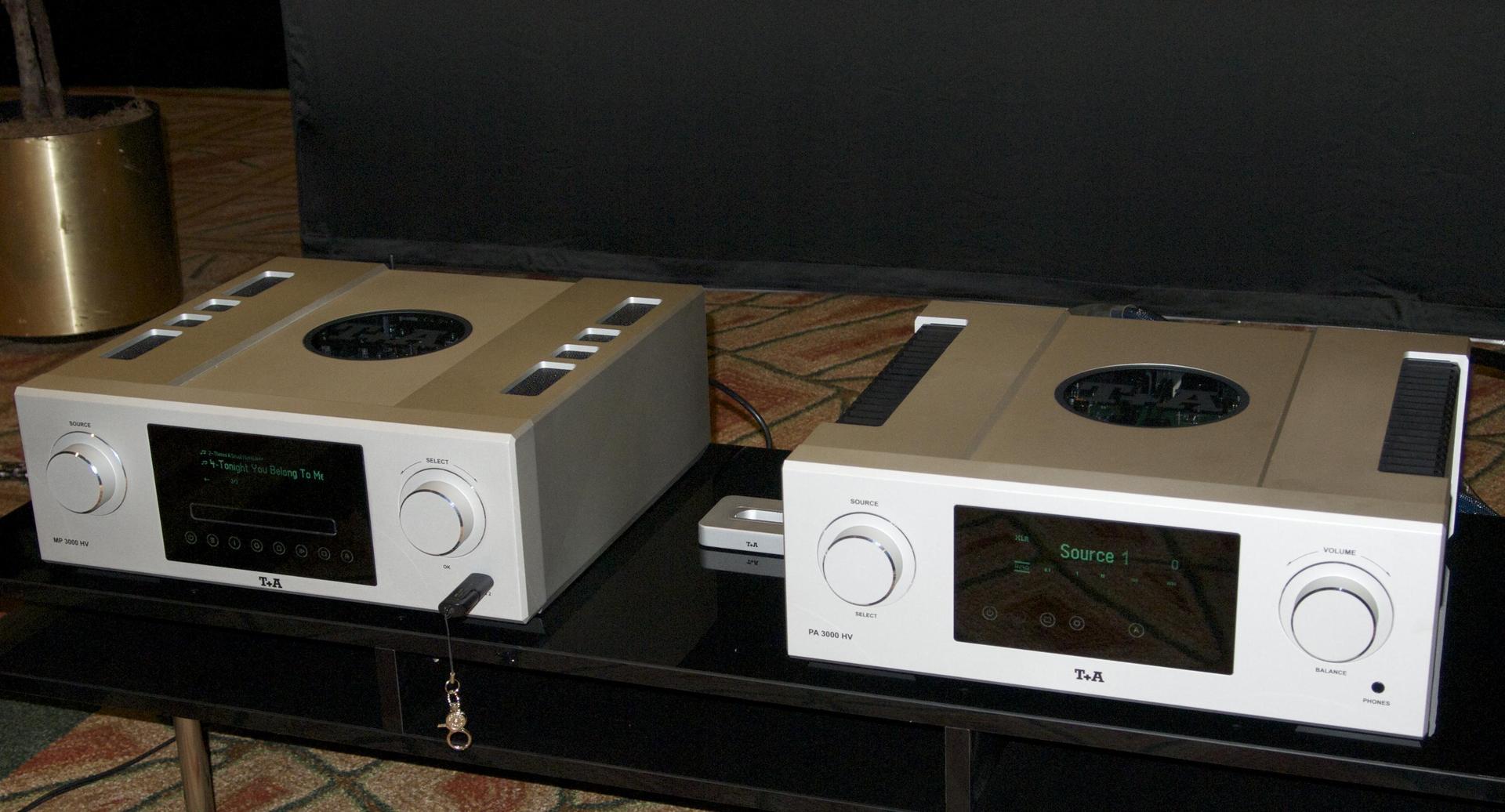 My unofficial award for most handsome new amp has got to be the T+A Elektroakustik PA 3000 HV integrated amp (see pic above) at $16,000. HV stands for high voltage, and describes solid state devices that are running at a much higher voltage than conventional designs (over 4 times that of a conventional transistor amp) Thus a more tube like sound character is achieved but there is incredible power. The integrated features Dual mono class AB amp with highly extended Class A range–up to 40W pure class A. Discrete components are used exclusively throughout. Even the volume control uses hermetically sealed gold contact relays. The chassis is a massive aluminum case with no magnetic materials and internal sections are fully shielded from each other. A companion multi-source music player MP 3000 HV is $12,500 (both now shipping). It features a Quad concept DAC with 4 converters per channel with high voltage stage. Separate analog and digital power supplies in MP 3000 HV (2 separate power cables) This duo was easily driving the Dynaudio Evidence Platinum towers ($85k) in a huge, high-ceilinged conference room. An insurmountable challenge for many systems but this one struck some fine notes.

In cable news Synergistic Research premièred it’s Galileo LE wires and power cords. Descended from the custom-made Galileo string cable system that JV reviewed a few years ago, these wires are more practical and available in common lengths for the typical user. Less expensive than the original but still costly SR’s President Ted Denney tirelessly demoed the properties of its Active Shielding and Acoustic Art technology in a conference room equipped with VAC electronics and the majestic Magico Q7. A huge, nearly unmanageable room sonically, Denney’s cable demo went a long way towards unlocking the spatial detail and image presentation from a broad selection of recordings.

Having heard the glass enclosed Waterfall Audio Victoria Evo loudspeaker at CES, the French import was performing even better at Newport in the hands of the reborn Aragon 8008 amp–a 200Wpc dual mono design that includes state of the art network technology for monitoring over a home network. Look for my review of this amp in a forthcoming TAS.

Small never sounded so sweet as the Audion Super Sterling 120 amp.(see pic below) As Audion pointed out, a KT120 wasn’t designed for single-ended. Uniquely it has  successfully adapted the Tungsol KT120 pentode valves for single ended use. It delivers a solid 24Wpc into 8 ohms and is optimized for speakers with sensitivity ratings of 86dB and higher. Price: $4175. 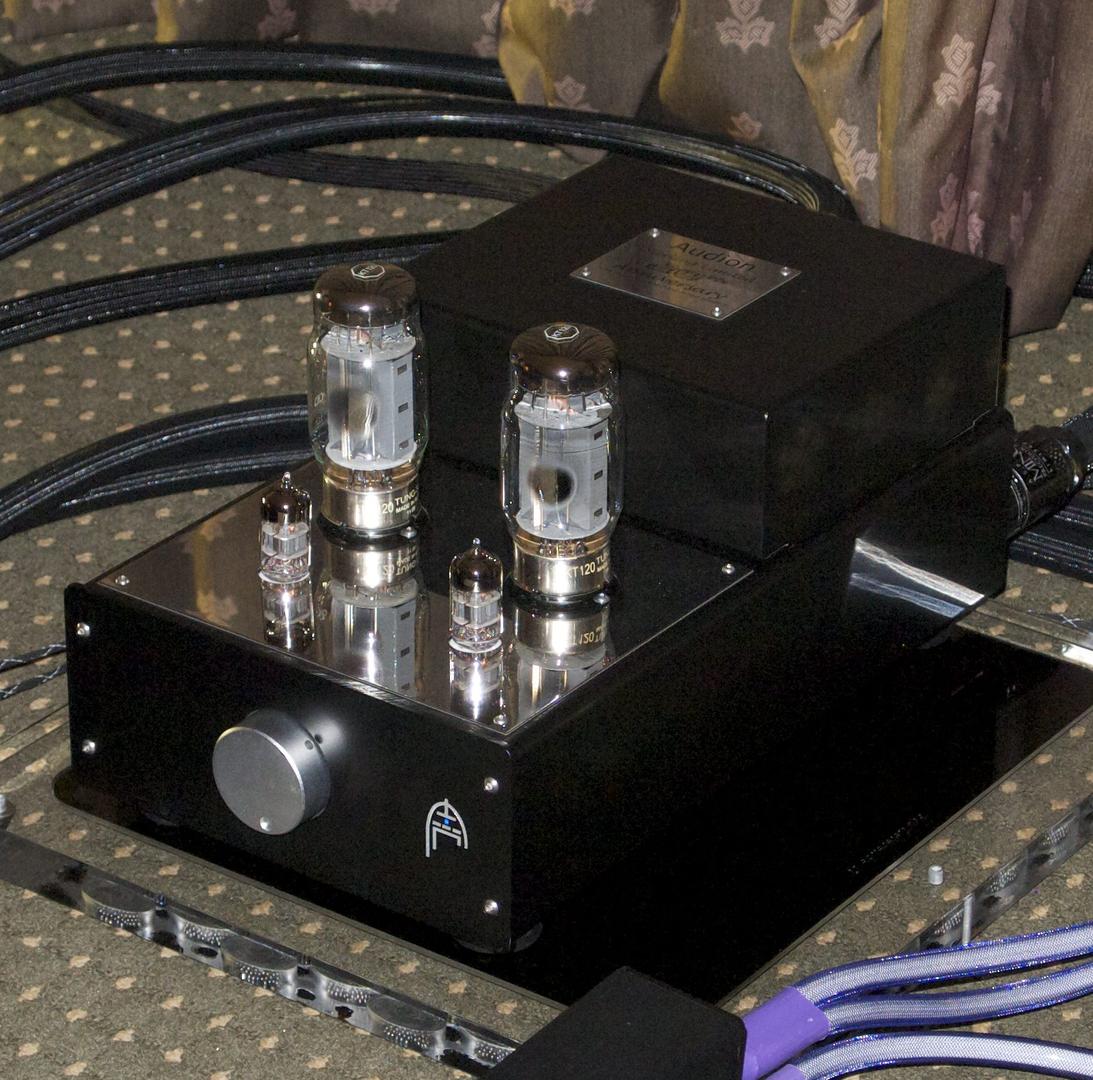 Another tip of the hat to The Lotus Group and their stunning performance from a system which included the always impressive G2 open baffle, DSP cross-over speakers, an SMc VRE-1C preamplifier, PranaWire Cables, Hanss T-60 Turntable (with Durand Telos 12″ tonearm/Ortofon MC Anna cartridge. dSC Scarlatti stack and the musica pristina music server and Esoteric A3 Stereo power. As I was seated they were playing the Eagles’ “Hotel California” from the band’s Live LP. It features Don “Fingers” Felder with an acoustic 12 string that sounded so riveting, colorful and lively with micro dynamic energy that in spite of my weariness of this track I didn’t move a muscle. 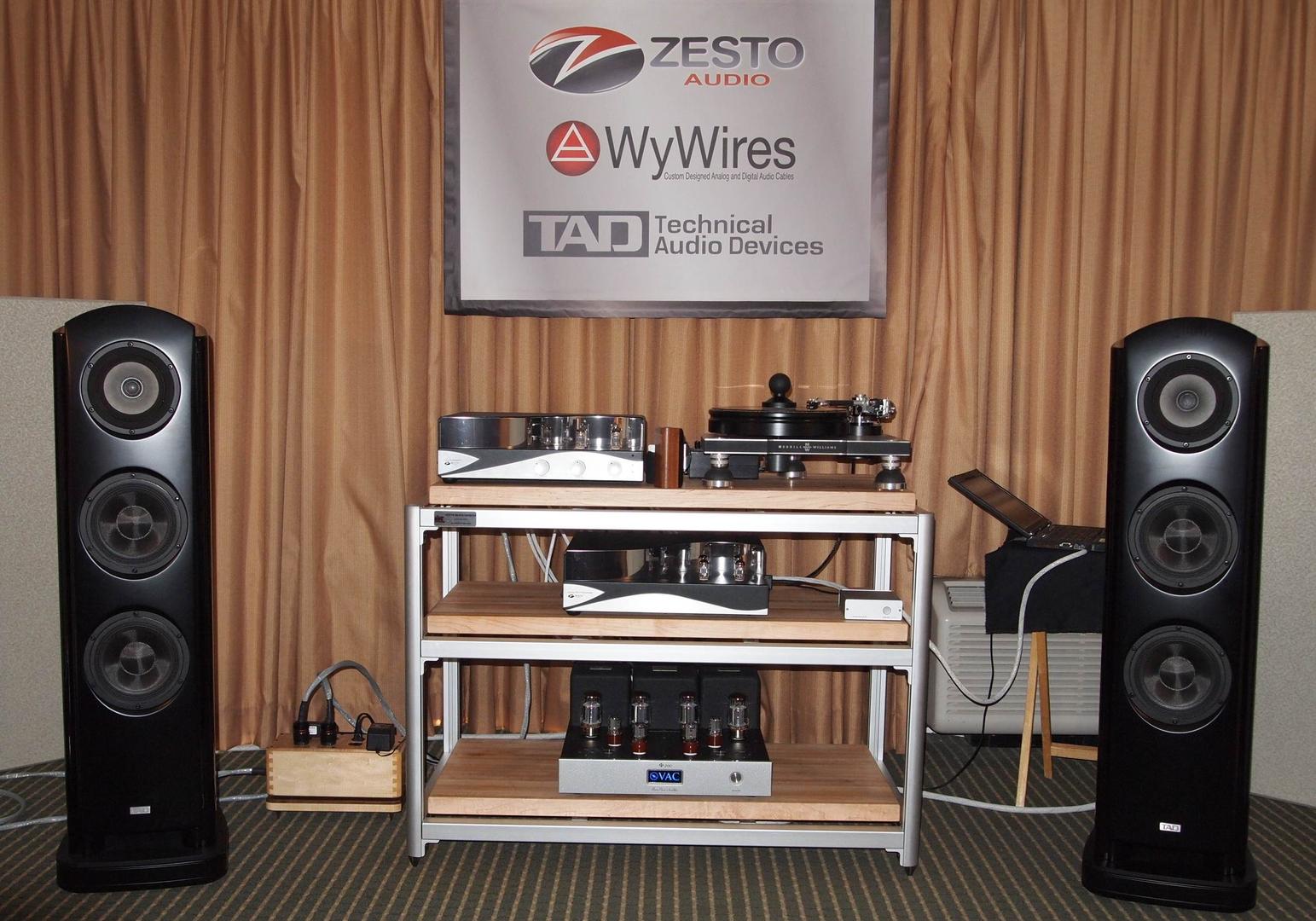 Finally, system/room synergy is always in short supply at these shows but bravo to a couple exhibits­–at the Hilton, to Zesto Audio, its phono and preamp and VAC amplification with TAD Evolution One loudspeakers, Merrill-Williams table/Tri-planar arm and Wywires cabling, and in a larger room at the Atrium,  Constellation Audio electronics (Cygnus server, Virgo pre amp, Centaur mono amps) driving the Magico S1 via Kubala Sosna Emotion cables. Both of these systems vanished within  the large projection of music and ambience that spread across the front of their respective rooms. These guys had it all going on with stunning resolution and extension and out of this world coherence.