“The Music Formerly Known as Classical”

As all classical music fans know, the era of giant, long-established labels like RCA, Columbia, Deutsche Grammophon, Mercury, Decca, Delos, and Telarc pouring out new releases by American orchestras has waned. Most new orchestra recordings these days originate in Europe, where costs are lower. If an American orchestra wants to document its legacy on CD or downloads (or even, in rare cases, on vinyl), it typically does so on an “in-house” label owned and operated by the orchestra itself. These in-house releases, often recorded during the orchestra’s regular concert performances, are intended more to enhance its prestige and patronage than to generate the profit from sales that motivates commercial recordings.

The much-praised cycle of Mahler’s ten symphonies recorded by the San Francisco Orchestra under Michael Tilson Thomas, for example, is available only on the orchestra’s own label, which also offers three dozen or so more recordings of the orchestra’s performances. The Chicago Symphony has 20 recordings on its CSO Resound label, with works by Bruckner, Shostakovich, and Stravinsky, while the more-adventurous     Seattle Symphony label now has about the same number, including highly-praised renditions of the complete orchestral music of the great French composer Henri Dutilleux.

Foremost among American orchestras that specialize in music written since World War II—“the music formerly known as classical” as it’s described—is the Boston Modern Orchestra Project or BMOP (pronounced “Beemop”), founded in 1996, and its house label, BMOP/sound, which began releasing CDs of the orchestra’s recordings in 2008. 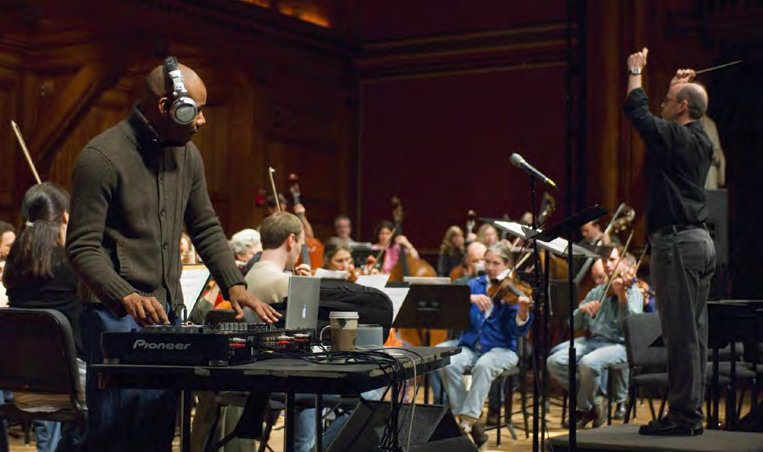 It’s hard to overstate the importance of this undertaking. It’s certainly of deep interest for anyone who cares about the concert music of the past century, and a vital part of today’s American musical culture in general. True, there have been some notable predecessors. The Louisville Orchestra’s “First Edition” series, for instance, commissioned, played, and released premiere recordings of symphonic works by modern composers from the mid-1950s to the 1980s. Many other valuable recordings of then-new music came from such enterprises as Columbia’s Modern American Music series, CRI, and New World Records, a tradition carried on today by such labels as Albany and Naxos.

But for the first two decades of the 21st century BMOP has been one of the dominant forces in programming and recording new and neglected modern American concert music, with BMOP/sound offering a wealth of releases consistently notable for the scope and daring of the repertoire, the superior expertise and polish of the performances, and the strict adherence to the highest standards of sonic accuracy. Even BMOP/sound’s detailed and authoritative program notes and colorful, imaginative cover art reflect the unstinting care put into every facet of these releases.

TAS readers should take note, if they haven’t yet discovered modern-era concert music, of the huge variety of fresh and imaginative instrumental (and vocal) textures, timbres, and techniques explored by 20th and 21st century composers. Especially in the wake of such iconic masterpieces as Debussy’s La Mer, Stravinsky’s Rite of Spring, Bartok’s Bluebeard’s Castle, and Schoenberg’s Five Pieces for Orchestra, the whole conception of what an orchestra can do has been vastly expanded. Much of the music on BMOP/sound (most of it recorded in the New England Conservatory’s sonically superlative Jordan Hall, some of the larger works in Wooster’s more spacious Mechanics Hall) is packed with intricate and novel instrumental pyrotechnics, and to hear the modern symphonic orchestra in its full splendor, rendered with a rich, vivid presentation that conveys all the detail, dynamic range, timbral subtleties, and acoustic space, is quite simply stunning. Great audio gear was made for the orchestral showpieces of our time.

BMOP is the brain-child of conductor and artistic director Gil Rose, who founded and has led the orchestra for the past 22 years, adding its house label 12 years later. I had a chance to talk to Gil about these endeavors early in January this year. His responses to my questions revealed an ardent devotion to this long-running project to rescue, preserve, and promote modern American orchestral music that otherwise would continue to be lost in obscurity.

So much American concert music is available only on old and/or inferior recordings. You have limited time, limited resources. How do you choose what to record?
Well it’s a combination of things. Part of it is that I seek out composers who interest me, pieces that interest me, important pieces that were never in or have fallen out of the discography, out of general knowledge. Another part of it is practical: we record what can be recorded, in other words what we can get funding for. It’s a bit of a chicken-and-egg situation. You can dream up a project and sometimes then find the funding, other times certain funding is available and projects fit those funding sources, and sometimes it’s a bit of both. It doesn’t get done, of course, unless we can pay for it. We get grants from most of the foundations that support recording American music, from individuals who make charitable gifts, from the NEA, we try Kickstarter campaigns, sometimes we can access faculty advancement grants. As many different CDs that we’ve released [44 as of now], there have been that many different funding formulas.

Does the funding from a specific source typically go for a particular piece, or do you sometimes get to choose what to do with it?
Usually the funding is directed toward a specific piece and/or composer.

You said earlier there are certain composers that you’re particularly interested in. In those cases do you try to seek out ways of funding them?
Yes, for certain composers and certain pieces. Recently we released the big three-part David Del Tredici piece Child Alice, something I always wanted to do and felt like needed doing. No one approached me to do that; instead I reached out to find the funding to get this project done myself.

One composer you’re clearly quite enthusiastic about is Andrew Norman, whose 45-minute spectacular orchestral fantasy Play you’ve so brilliantly recorded.
This is a work that we took from commissioning it to premiering it to recording and releasing it. It’s a poster child for what we do when we work with younger composers, and that project, which has helped launch Andrew into the public mind, is a great use of our resources. The thing about recording that’s so important and satisfying, why it’s so much a part of our mission, is that it puts music like Andrew’s Play out there in the world the way a single first concert performance in this day and age can’t. It was mostly through the recording that Play got the exceptional critical acclaim it deserved, was picked up by the Los Angeles Philharmonic, nominated for a Grammy for Best Contemporary Composition, and won the $100,000 Grawemeyer Award. Indeed, when the recording was released a debate ensued over whether Play was the most significant orchestral work so far in the 21st century. None of this would have been possible without BMOP. We’re not constrained by the financial models that so many orchestras—including the richest in the country—have created for themselves. When they have the capacity to take risks, they almost never do. So if the model that’s been created by symphony orchestras over the last 60 years is unable to advocate for something like Andrew Norman’s Play, there has to be someone to get up in the morning and tilt at this windmill, whatever the risks.

Besides your labors in the cause of new symphonic music, you’ve also turned your attention to important older American works that have languished in obscurity, like Irving Fine’s 1962 Symphony that’s appeared only once in the LP era and once on CD, and Lukas Foss’ four symphonies, none of which have ever before been recorded. The Fine Symphony and Foss’ Second Symphony are great works, and it’s wonderful to have these now on BMOP CDs.
Yes, the Foss Second is a completely unknown masterpiece. There are so many pieces like that out there, that are lost, because they just got their shot once or twice, and then people didn’t want to take the risk to play them any more. We also like to dip back into the early part of the 20th century and do something like Antheil’s Ballet Mécanique, which we’ve recently recorded.

What music have you done lately that really surprised you?
In November we did a concert performance of Norman Dello Joio’s 1956 opera about Joan of Arc’s trial, The Trial of Rouen, which we later also recorded. I thought going in it would be okay but after doing it walked away thinking this was quite spectacular—one of the three or four great American operas. A couple more that to my surprise turned out to be quite spectacular are, as I mentioned before, the Lukas Foss Second Symphony, and Dominick Argento’s [1973 opera] Jonah and the Whale. If I leafed through the catalogue I’d find lots more such surprises.

What about in-process and future projects?
We’ve recorded some important music that hasn’t yet been released, including the complete orchestral music of Leon Kirchner, for example, along with Gunther Schuller’s children’s opera The Fisherman and His Wife [1970, with libretto by John Updike]. Also Harold Shapero’s not-yet-recorded orchestral works. We’ll have seven or eight releases out this year for sure. High on my list of future projects are the symphonies, some of them not yet recorded, of George Rochberg. He’s a great composer who really knew how to use an orchestra. I’d also like to do the Jack Beeson symphonies.

In the face of so many more things you’d like to do, I wonder if you ever get discouraged by the ongoing struggle for financial support that you have to endure to achieve them?
One can of course get discouraged, sometimes, by the financial struggles. And other kinds of struggle too, for as all musicians know, sometimes the magic works and sometimes it doesn’t. There are times when I regret we can’t make our recordings “live in concert,” as orchestras are able to do who give three or four performances of each program. There’s a certain electricity, an excitement, that sometimes comes only under the exigency of performing before an audience. But of course you can’t count on that, nor can you count on a one-time-only performance to be free of a blooper or miscue, or a cymbal that falls over, or someone in the audience having a coughing fit. BMOP is a labor of love, and sometimes I’m more conscious of the labor, and sometimes of the love. But when I look at the dozens of indispensable recordings in our catalogue, I know we’re creating a unique and indispensable legacy. What could be more worth both the labor and the love than that?

JV and RH: Why did you decide to master from […]

Analog and Digital Resolution Some years back, in a review […]