The Mayor of MacDougal Street

The “Early-60s Folk Music Revival” incubated gigantic talents that reshaped popular music forever—Bob Dylan and Joni Mitchell being the most prominent. A whole world of rock and pop music, “singer-songwriters,” and hybrid folk-rock Americana is unimaginable without these two. Many less-known figures shone brightly during that period also, of course, from The Kingston Trio and Tom Paxton and Phil Ochs to Jesse Colin Young and Peter, Paul, and Mary, among many others, though their fame and influence were less widespread and less durable.

Of these less-known musicians one stands out as a seminal influence on, collaborator with, and ever-helpful friend of both Dylan and Mitchell: Dave Van Ronk, a charismatic, affable, bearded, bear-like folksinger, cabaret performer, and raconteur extraordinaire who knew and welcomed many a newcomer carrying a guitar and dreams of fame into Van Ronk’s world of smoky Greenwich Village coffeehouses and basement dives where pretty much anyone could perform before a lively audience ready to give him a chance—at least for a song or two. Inspiring, advising, and promoting the new talent as it showed up on his doorstep, Van Ronk offered his living-room couch and his hospitality to penniless Bobby Zimmerman recently blown in from Minnesota with no place to sleep, and encouraged the gifted young blonde Canadian with her weirdly-tuned guitar and haunting voice, becoming the first to add “Both Sides Now” to his performing repertoire and to record it. 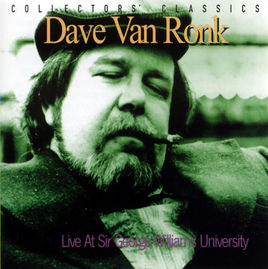 Knowing almost everyone in the late 50s-early 60s folk scene, Van Ronk was a shrewd and ideally placed witness to its burst into national prominence. His immersion in “the Great Folk Scare” (as he sardonically put it) is reflected in his pungent, witty memoir, Mayor of MacDougal Street, a vivid and fascinating account of a hardworking musician’s life and times, packed with revealing anecdotes and sharply-drawn portraits of his fellow musicians as well as astute commentary on the larger cultural and political arena of those turbulent times. But Van Ronk was much more than a guru to and chronicler of other musicians. He was a major force as both singer and instrumentalist: a brilliant guitarist who could tickle out harmonically sophisticated ragtime ditties and early jazz standards, and a commanding singer possessed of a gravelly but eloquently modulated voice more indebted to Louis Armstrong than to traditional ballad singing, and adaptable to everything from Kurt Weill hits and Tin Pan Alley oldies to slave-era field-hollers, Delta blues, jug-band numbers, and much, much more, including freshly-minted offerings from his talented contemporaries.

Of the many outstanding records Van Ronk made over the years, his breakout and best studio recording is Dave Van Ronk, Folksinger, issued on Prestige in 1963, a definitive demonstration of his rock-solid yet intricate fingerstyle guitar playing and ability to make so many different kinds of songs so completely his own. Live-in-concert recordings are also an important part of his discography, so it’s a pleasure to welcome a new 2018 Record Store Day vinyl-only release of Dave Van Ronk Live at Sir George Williams University, recorded in 1967 with Van Ronk performing in his natural habitat at the height of his powers before a hip, enthusiastic audience. Included are DVR specialties like “Cocaine,” a morose lament by a drug-befogged addict; “St. Louis Tickle,” one of Van Ronk’s deft transcriptions of a sprightly piano rag for his big, weather-worn Gibson guitar; and his bouncy and boisterously ribald take on “Keep It Clean.” “The Old Man,” a little-known early Dylan song, shows the poignance and simplicity that Van Ronk could bring to an understated parable, while the traditional he-done-her-wrong-and-she-got-even “Frankie and Albert,” and “That Will Never Happen No More” (to which Van Ronk added another verse perfectly suited to Blind Blake’s original ones), a hilarious proclamation by a slow learner who keeps falling for scheming females, show Van Ronk’s huge talent as a comedic musical storyteller.

Even better is Van Ronk’s take on “St. James Infirmary” (or “Gambler’s Blues,” as it’s titled here): backed by his guitar’s evocative “blue” harmonic shadings, he brings to life the ragged, whiskey-soaked resignation of a love-struck card sharp down on his luck and betrayed by mortality, but still fighting back, still proclaiming his proud defiance. As ever, Van Ronk’s uncanny ability to get inside the personalities and moods created by words and music shines through everything he sings.