The Cutting Edge of ECM

But it was an album by pianist Mal Waldron, Free at Last, that quietly signaled one of the biggest musical milestones of 1969, the inception of producer Manfred Eicher’s Edition of Contemporary Music, aka ECM Records. It was the first salvo in nothing less than a revolution in recording. One wing of that revolution, occasionally overlooked, was the Munich label’s promotion of avant-garde jazz. That wing has had its quiet moments, but the ECM vanguard has recently been on the move again.

Over the past 47 years, ECM has issued more than 1,500 titles, most with the subdued, minimalist, and strikingly consistent cover art reflecting the visual aesthetic of Eicher and his designers, particularly Barbara Wojirsch, Dieter Rehm, and Sascha Kleis. That distinctive packaging sensibility, which carried over into the CD era, is one of the markers by which millions of consumers identify ECM. But give a free-association test to a variety of ECM aficionados and you’ll turn up other touchstones, including specific artists (Keith Jarrett, Jan Garbarek, Arvo Pärt), musical classifications (“icy Nordic jazz,” “minimalism,” “Euro-folk-world-music fusion”), and recording sonics (“pristine,” “atmospheric,” and “the most beautiful sound next to silence,” an ECM motto derived from an early review of its records). 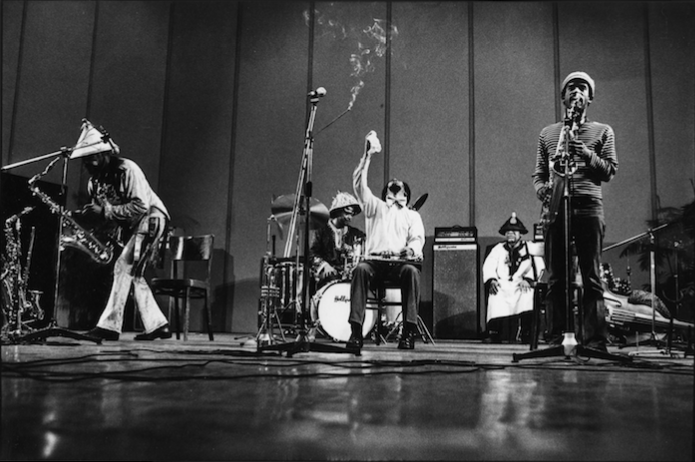 All of those references and qualities are essential to the ECM brand: Jarrett vaulted ECM into the mainstream in 1975 with the double-LP Köln Concert, the best-selling solo album in jazz history, with sales of more than 4 million to date; Norwegian saxophonist Garbarek epitomized a certain reflective, cool-even-when-hot approach to arranging and soloing, and his million-selling 1994 collaboration with the Hilliard Ensemble was a landmark in the fusion of jazz and early music; Eicher’s advocacy for Estonian classical and sacred composer Pärt led to the advent of the ECM New Series imprint in 1984; countless ECM musicians–including Garbarek, Charlie Haden, guitarist Steve Tibbetts, violinist/vocalist Iva Bittová, Tunisian oud player Anouar Brahem, Indian violinist L. Shankar, the ensemble Oregon, and Brazilian percussionist Naná Vasconcelos—have blurred genre boundaries; and Eicher’s well-documented commitment to meticulous production values and crystal-clear, spacious audio reproduction has for decades set a lofty standard for recorded sound. As Eicher told Cormac Larkin in a 2015 interview for The Irish Times: “From the very beginning I was paying a lot of attention not only to what musicians I will record but how it will be recorded. I didn’t want it to sound like Blue Note or Impulse. I wanted to be more specific on chamber musical details, because that’s what I learned.”

Still, all those defining hallmarks tend to obscure ECM’s role as a longstanding haven for cutting-edge jazz composers, experimental sound explorers, and free improvisers. The emphasis of the catalog has ebbed and flowed, and ECM’s comfort zone might be one of beautiful melodies, lush harmonies, smooth textures, emotional equanimity, and meditative, even elegiac moods, but the label has been, and continues to be, home to many of the most important veteran radicals, thorny noisemakers, and defiant rule-breakers who changed the course of jazz after bebop, as well as a host of avant-garde progeny who continue to advance the movement more than 50 years after Bill Dixon’s “October Revolution in Jazz” festival in Manhattan. 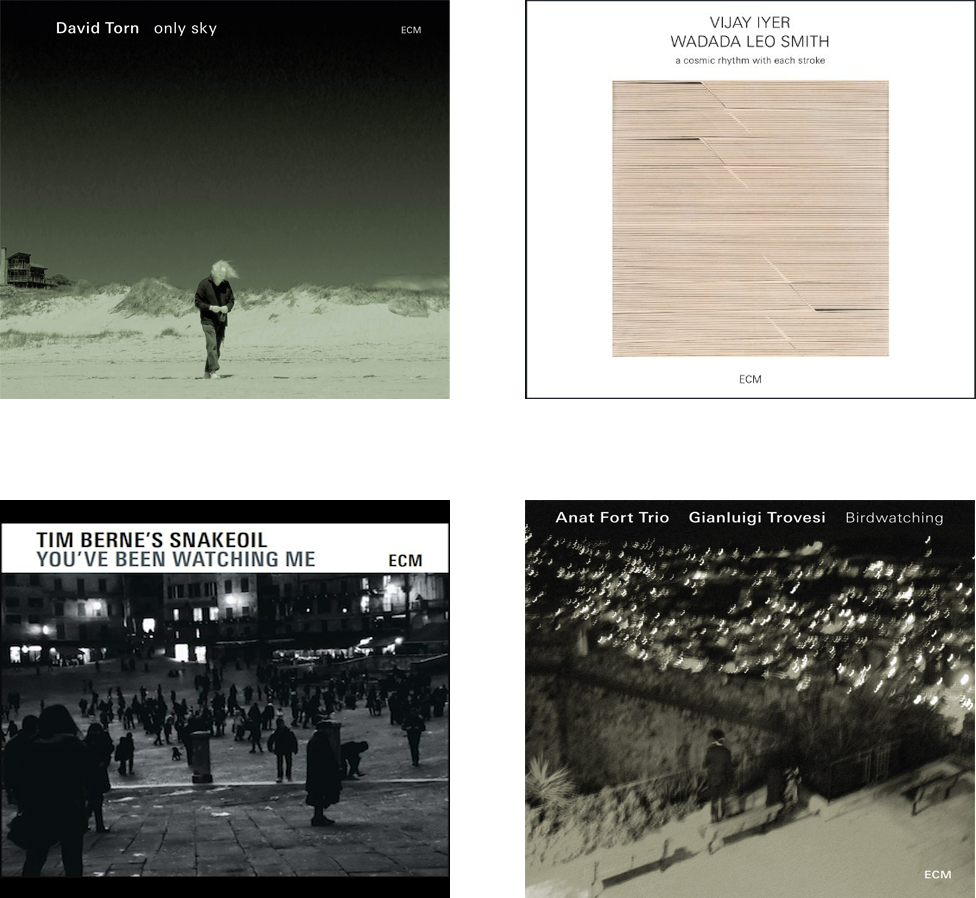 The ECM jazz lifeblood might seem to run more conspicuously through the music of Jarrett and other pianists such as Paul Bley, Steve Kuhn, and Ketil Bjørnstad, guitarists Ralph Towner, John Abercrombie, Pat Metheny, and Terje Rypdal, saxophonist Garbarek, trumpeters Kenny Wheeler, Enrico Rava, and Tomasz Stanko, and bassists Arild Andersen and Eberhard Weber. But while there have been significant stretches when ECM jazz releases have been dominated by those and other more recent mainstays (Bob Stenson, Tord Gustavsen, Charles Lloyd, Anat Fort, Dino Saluzzi, Stefano Bollani, Gianluigi Trovesi), there have always been wild cards to belie the notion that there is one, hegemonic “ECM sound.” As Eicher told the Irish Times, “If people think that we ask musicians to record for us because we want to sculpt their sound in a certain kind of way, that’s nonsense. We choose musicians for their music.”

ECM’s edge might sometimes be masked by its prettiest sounds, but fans of “outside” music have always been able to find myriad titles—a Roscoe Mitchell record here, an Evan Parker album there, the Jack DeJohnette Special Edition sessions, the surprising releases of Incredible String Band cofounder Robin Williamson, the trippy electronica-jazz of Nils Petter Molvær and the band Food—to feed their free-jazz and weird music jones. Those who hanker for electric guitar music that bursts through conventional boundaries rejoice at the fact that ECM embraced Bill Frisell early on and provides a forum for the likes of Rypdal, Steve Tibbetts, David Torn, Eivind Aarnset, and Wolfgang Muthspiel.

Of course, when it comes to music, “pretty” is not synonymous with “mainstream,” “lightweight,” or “boring.” Jarrett, Garbarek, Towner, Frisell, and others have proven that many times over. Swiss pianist Nik Bärtsch has offered further evidence with the ECM recordings of his Ronin and Mobile bands during the past decade; borderline minimalist in their patterns, they boast beautiful melodies but roll aggressively on quirky, funky, edgy percussion. Then there’s pianist Marilyn Crispell. When she first became affiliated with ECM, nearly 20 years ago, releasing 1997’s Nothing Ever Was, Anyway: Music of Annette Peacock with bassist Gary Peacock and drummer Paul Motian, Crispell had long flown beneath most people’s radar despite having performed and recorded extensively with the groundbreaking Anthony Braxton Quartet and making dense, energetic recordings, deeply influenced by John Coltrane and Cecil Taylor, for such labels as Leo, Victo, and Music & Arts. That she should be welcomed into the ECM fold to record solo, duet, and trio albums—often gorgeous but never compromising her creative urgency—indicated that Eicher had kept his ear trained on the forward-leaning musicians of the U.S. as well as those in Europe.

In the 21st century, you wouldn’t build a serious collection of progressive or free jazz without essential titles from such labels as Pi, Tzadik, AUM Fidelity, Cuneiform, Firehouse 12, ACT, Thirsty Ear, Clean Feed, TUM, and Intakt. But ECM belongs on that list as well. The label holds up its end of the avant-garde bargain by continuing to extend its reach—beyond European jazz, beyond contemporary classical, beyond early music, and beyond chamber-folk fusions—and maintaining its ties to the legacy of free improvisation of the 60s, the AACM in Chicago, and the downtown New York scene of the 80s and 90s, and giving a high-profile platform to American musicians who might be critically acclaimed at home but who deserve the proverbial wider attention.

In just the past three years, ECM has issued notable recordings by trumpeters Ralph Alessi and Avishai Cohen; saxophonists Tim Berne, Mark Turner, and Chris Potter; pianists Vijay Iyer, Craig Taborn, and David Virelles; and bassist Michael Formanek, to name a few. And a list of the best avant-garde jazz recordings of the past two years would have to include saxophonist Tim Berne and Snakeoil’s You’ve Been Watching Me, David Torn’s solo Only Sky, Iyer and trumpeter Wadada Leo Smith’s duo a cosmic rhythm with every stroke, Formanek and Ensemble Kolossus’ The Distance, drummer Jack DeJohnette’s live Made in Chicago (with Henry Threadgill, Roscoe Mitchell, and Muhal Richard Abrams), and drummer/percussionist Ches Smith’s The Bell, with Taborn and violist Mat Maneri.

The personnel ranges from pioneers and 40-plus-year veterans of free jazz to upstart renegades of the new century and is consistent with Manfred Eicher’s complaint to writer Stuart Nicholson, in a 2001 issue of Jazz Times, about the “boring neoconservative 1970s and 1980s,” especially vis-à-vis the 1960s, when “There was still something called magic.” If the neoconservatives were all about reconnecting with the tradition, read “blues, swing, and bebop,” Eicher seems committed to sustaining the 60s “new thing” of experimentation and playing outside the lines.

In the 2007 book Horizons Touched: The Music of ECM, edited by Steve Lake and Paul Griffiths, Eicher, in conversation with writer-turned-ECM-staffer Lake, notes that the label’s prodigious output has sometimes been like a tranquil sea. “We had a period when there was a certain sameness, maybe, or weakness even, but it was needed—as in the Keith Jarrett solo concerts, his great concerts, where you hear all these long waves, and you hear the parts where he needed to reload his energies to fly into the storm.” But he also alludes to “a continuous movement of undercurrents and unexpected drifts, winds coming from different directions to become a central storm.”

If the most radical undercurrents have now and then been virtually undetectable, fathoms deep below the surface, they’ve nonetheless stayed swirling in the darkness, ready to storm up again. Even when the jazz releases reinforced the facile notion of an “ECM sound,” the New Series was cultivating and bringing to the fore edgy, experimental classical and chamber music, and as Eicher told Lake, “The vocabularies of contemporary music and the jazz that has developed out of the free area are often very similar.” It could be that the avant-garde current of violist Kim Kashkashian, pianist Anthony de Mare, violinist Gidon Kremer, and composers Heinz Holliger, Heiner Goebbels, and György Kurtág has fed and helped renew the label’s avant-garde sensibility that allows space for Tim Berne, Vijay Iyer, and others.

Clearly, ECM’s commitment to cutting-edge jazz is on an upswing. Still, the field is wide open, perhaps more now than ever, and perhaps thanks to ECM’s advocacy. One can hopefully imagine what the ECM treatment—from the label’s trademark spacious, meticulous production to its international distribution and promotion—would do for, say, pianists Matthew Shipp, Myra Melford, Kris Davis, and Satoko Fujii, saxophonists Rudresh Mahanthappa and Ingrid Laubrock, clarinetist Ben Goldberg, bassist William Parker, or guitarist Mary Halvorson. No doubt Manfred Eicher will have a few surprises up his sleeve as ECM approaches its golden jubilee in 2019.

Nancy Wilson Gets to the Heart of the Matter

Where would the high end be without William Zane Johnson, […]

There are Paul McCartney albums, and then there are self-titled […]