Beginning in 1963, The Beatles sent out a Christmas record every year to members of their fan clubs—or “Beatles people,” as they were called. In all, seven 7-inches appeared, and on December 15 Apple Corps Ltd./Capitol/UMe reissued that series in The Christmas Records, a nicely-packaged box set that includes a 16-page booklet. Originally released as flexi-discs, the records are now on colored vinyl. Each disc has its own cardboard cover, and those covers begin to chart the changes of The Beatles, starting with simple black-and-white photos of the band and then moving to more psychedelic imagery (and in fact the last two cover seem anachronistic in light of the direction the group took after Magical Mystery Tour). The spoken segments range from droll season’s greetings by all the band members to John’s poetry to pure gibberish, and musically the foursome share snippets from albums that had not yet been released along with some very loose musical performances that are quite silly, although top honors in the goofy department may go to guest artist Tiny Tim’s performance of “Nowhere Man.” (Talk about competition!)

The discs do a nice job of charting the trajectory of the Fab Four. At the time the first disc was sent out to fan club members, all hell had not yet broken loose—or at least not in the States, as the December, 1963 disc precedes the first American LP by a month and the first Ed Sullivan appearance by two months while the final disc includes excerpts from the last album The Beatles recorded, Abbey Road. You might think that, as The Beatles became grown adults and Beatlemania became somewhat of a burden, fan-club Christmas records would seem like embarrassing reminders of their earlier mop top days. But not only did they keep sending out such records, their length increased, and the band members fussed with the records more as time went on, the aural and verbal non sequitirs becoming that much wackier, an evolution that marks the band’s progression toward greater experimentation. 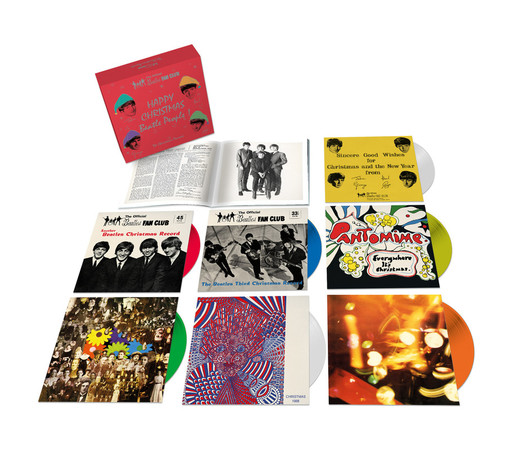 The zaniness of the set will spark memories for Beatles fans of aspects from every point in their career. While listening to the discs, you may be reminded of those early press conferences where the Fab Four seemed to have a witty answer for every question; the humor/absurdity/surrealism of the movies Help, A Hard Day’s Night, Yellow Submarine, and Magical Mystery Tour; such musical oddities as “Wild Honey Pie” and “Birthday” from The White Album and Lennon’s off-the-cuff “Dig It” from Let It Be; the between-song banter and mid-song comments of Let It Be and countless Beatles boots from those sessions, with recordings that included completely irreverent performances of everything from “House of the Rising Sun” to “She Came in through the Bathroom Window.” Humor was always a part of The Beatles, even at the end, and here we remember that, very late in the game, the flip side of “Let It Be” was “You Know My Name (Look up The Number),” an act of pure lunacy that was mostly Lennon and McCartney’s baby. To understate the obvious, then, these experiments were not out of character for The Beatles, and they did this sort of thing quite well. While spinning the records, I dutifully scribbled notes about various minutiae, but continually I found myself laughing out loud, reminding me that they sure knew how to make us laugh. That’s one of the reasons we loved them.

Talent is An Asset, And Sparks Appears to Have It

My introduction to Sparks came during a 1974 performance on […]