On a recent visit to Southern California, I stopped in to see Audience, maker of a highly regarded line of AC power-conditioner and signal cables. During the visit, however, I discovered that Audience is much more than a cable and power-conditioner manufacturer.

Back in the late 1980s, Audience founder John McDonald and his then partner, the late Richard Smith, conceptualized what they viewed as the ideal loudspeaker. The exercise was more of a “what if” thought experiment rather than a concrete design brief. Their idealized speaker would use many small, identical full-range drivers in a line-array, which confers the advantage of needing no crossover. Each driver would reproduce the entire frequency spectrum, although without much acoustic output. Multiple drivers would increase the power handling, dynamics, and ability to play loudly. A crossover-less speaker had the advantage of no discontinuity between drivers, uniform polar response, and no inductors or capacitors in the signal path between the power amplifier and the loudspeaker drivers.

This approach sounded intriguing, but no driver was available that could reproduce the entire audio band and have enough power handling and excursion to produce adequate listening levels. Over the past 20 years, Audience has worked on-and-off to develop such a driver, but recently put forth their full effort. The result is the Audience A3 3” driver, the foundation for the entire eight-product ClairAudient line of loudspeakers. Every speaker in the line uses only the A3 driver, with the differences between speakers simply being the number of drivers employed.

The A3 is a very interesting device; its basket, motor structure, and diaphragm are unlike other similarly sized units that are used as midrange drivers. Instead, the A3 is built just like a subwoofer driver, but miniaturized. The unit has an open basket design, neodymium magnet, only 2.5 grams of moving mass, and an extraordinary 12mm excursion. The motor is patented, and the surround and basket are patent-pending. Frequency response is 40Hz–22kHz. 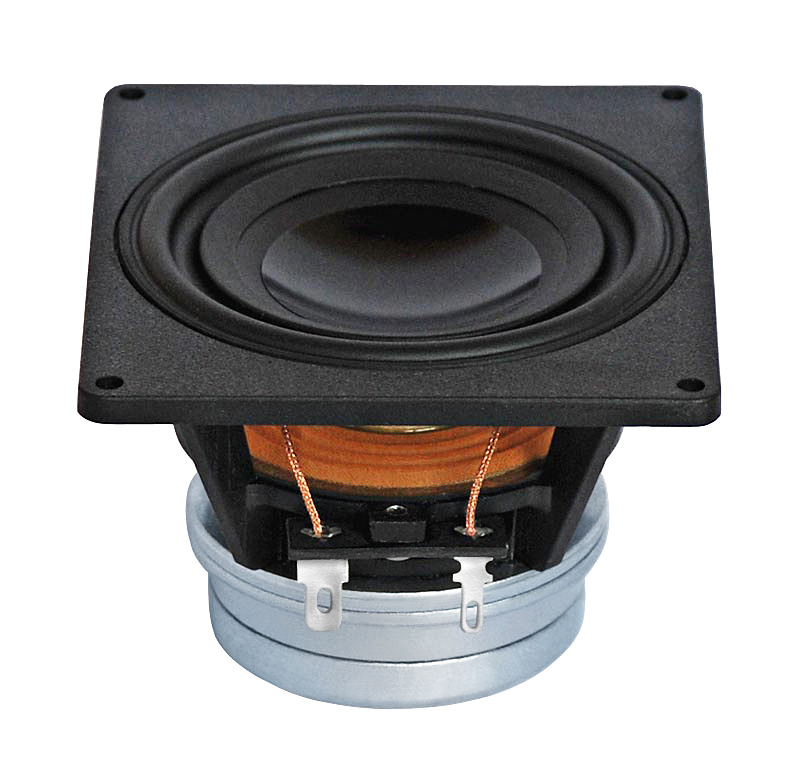 The ClairAudient line includes eight models, ranging from the $9500 four-driver LS4 to the $47,000 32-driver LSA16+16. The model number indicates the number of drivers employed. Each model is available as a monopole with all drivers front-firing (LSA4, for example), or as a bipole with an identical driver array on the side/rear panel (LSA4+4, to continue the example). The LSA4+4 has a sensitivity of 93dB and a maximum continuous output level of an astounding 121dB. The LSA16+16’s sensitivity is a whopping 99dB with a maximum continuous output level of 128dB. (Audience is about to introduce a two-driver version, called the LSA2 at “under $2000,” and the bipole LSA2+2 at “under $4000.”)

I listened to the LSA4+4 and the LSA16+16 in John McDonald’s home listening room, driven by Audience’s new preamplifier and power amplifier. Although I was impressed by the A3 driver’s specifications and apparent capabilities before listening to the full speaker systems, I nonetheless had a preconceived idea that the system would not have much extension at the frequency extremes, and not play very loudly. 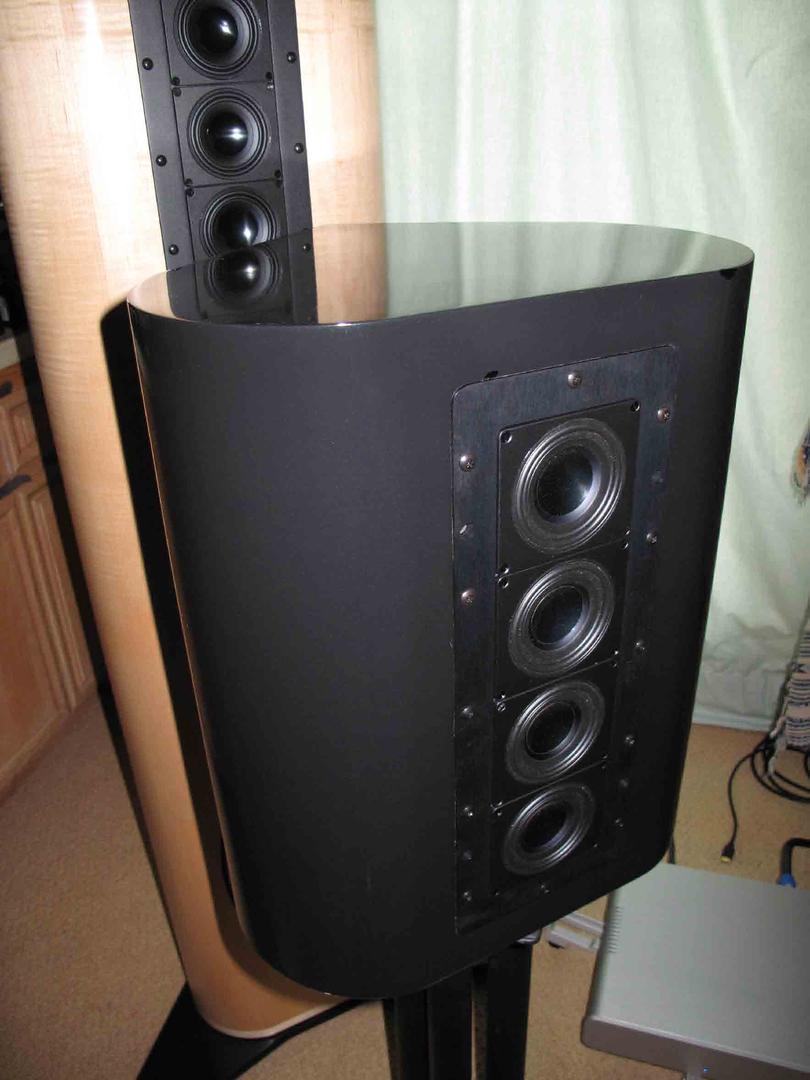 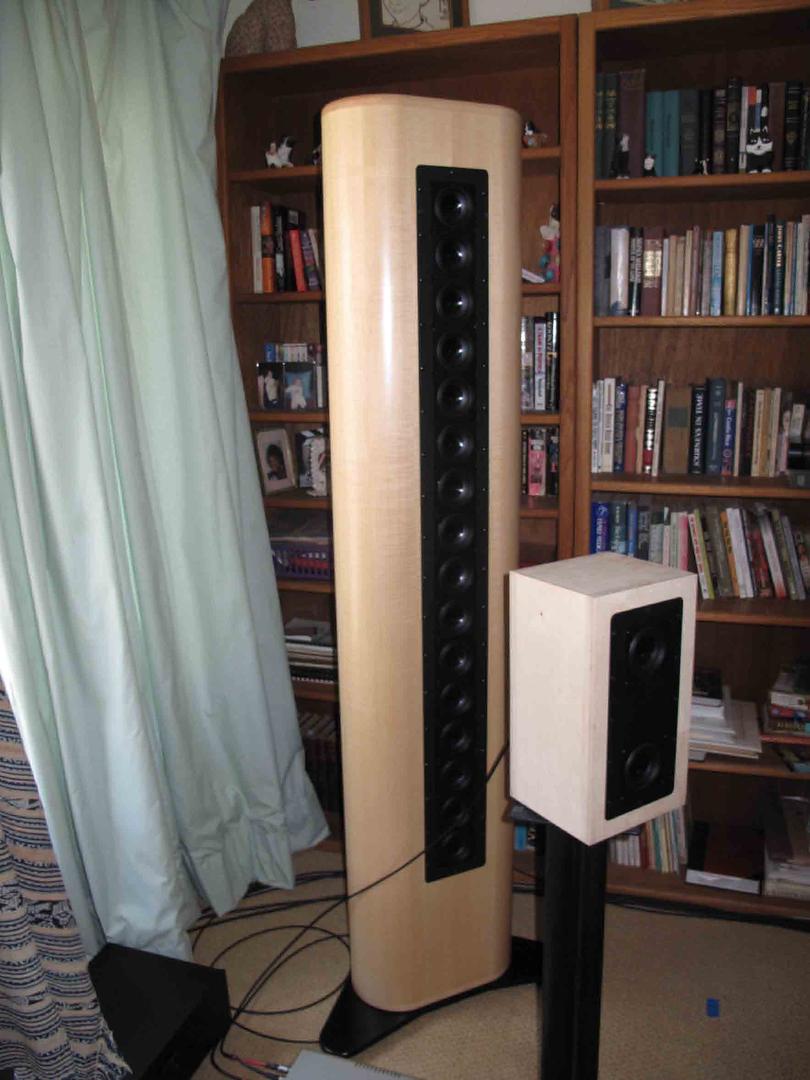 The ClairAudient LSA16+16 with the prototype LSA2+2 in front

I was wrong on both counts. The LSA4+4 sounded like a full-range speaker in every way, but with a coherence and seamlessness that was undoubtedly due to the lack of crossovers and disparate drivers. The midrange was palpable and immediate without sounding forward or emphasized. The top end had a full measure of detail and resolution, without the lack of air and extension I’ve heard in the past from full-range drivers. But the most surprising aspects of the LSA4+4 were its bass and dynamics. The bottom-end exhibited real weight and body, with a wonderful palpability of instrumental texture on acoustic bass. Similarly, they system was very quick, dynamic, and agile, with impact behind musical peaks.

Switching to the LSA16+16 reinforced these impressions; the big speaker had all these qualities but in greater abundance—the bass had more weight and power, the dynamics were more startling, and the soundstage became more expansive. The system didn’t reproduce the lowermost octave (20Hz–40Hz) with much authority, but Audience makes a matching woofer for those who value sub-40Hz response.

My audition was unfortunately quite brief, but in the short time I had with the two ClairAudient models, I was impressed by the top-to-bottom coherence, seamlessness, and sense of transparency—over and above my surprise at just how “full-range” the system sounded, along with its ability to play loudly without strain.

The ClairAudient loudspeakers have been more than 20 years in the making, but, at least from initial impressions, the effort has been worth it.