Returning to the Florida Audio Expo, often referred to as FLAX, provided a much-needed sense of relief. The February 2020 edition was the last major audio show to be held before the pandemic shut down, so much of the planet’s commerce and congregation. Now, walking the crowded halls, one could be forgiven for thinking nothing had happened in the intervening two years.

The venue, an Embassy Suites hotel near Tampa airport, was the same. As in past years, the hotel spread out exhibitors—this year, 140 manufacturers occupying 40 rooms—across 12 floors, dramatically reducing sonic bleed-through. Only a handful of would-be exhibitors got cold feet and didn’t make the trip.

The crowd of audiophiles who gleefully thronged the show—so many they broke the elevators early on Day One—seemed unfazed by Covid. Masks? That’s so 2021. Vaccination requirements? Oh, please. This is Florida we’re talking about. In fact, the stray mask-wearer was the only reminder that something significant had happened since the last FLAX.

With one exception, the rooms themselves were also unchanged. That meant reasonably good sun, though in some cases manufacturers resorted to creative solutions (e.g., pillows in chandeliers) to overcome acoustical challenges. The exception to this comfortable familiarity was that since 2020 the hotel had foregone the Ethernet ports that previously graced every room. Accordingly, exhibitors (who weren’t given advance notice of the change) had to rely on a suddenly overwhelmed Wi-Fi network to connect to streaming services. Exhibitors made up for the iffy streaming by leaning heavily on NAS drives, LPs, and open-reel tapes.

Because FLAX is primarily a dealer-oriented event designed to show off systems rather than product introductions, we divided the rooms geographically instead of parsing them by component type. We then took a system-oriented approach to reporting on what we heard, since it’s difficult, if not impossible, to identify which component is responsible for a rig’s sonic/musical success or failure. Without fixing a dollar-amount dividing line, each of us picked five “Aspirational” systems (defined as those that cost an arm and a leg) and five “Inspirational” setups (defined as those that leave an audiophile with three limbs intact).

Finally, as is traditional, we each named “Best in Show” systems, components, and experiences, with candidates chosen from either writer’s territory.

Throughout the show, an outfit reassuringly named Barbaric Nightmare Productions was filming a documentary called “The New Audiophiles.” We look forward to seeing it on large and small screens everywhere. In the meantime, join us for a whirlwind tour of FLAX 2022. 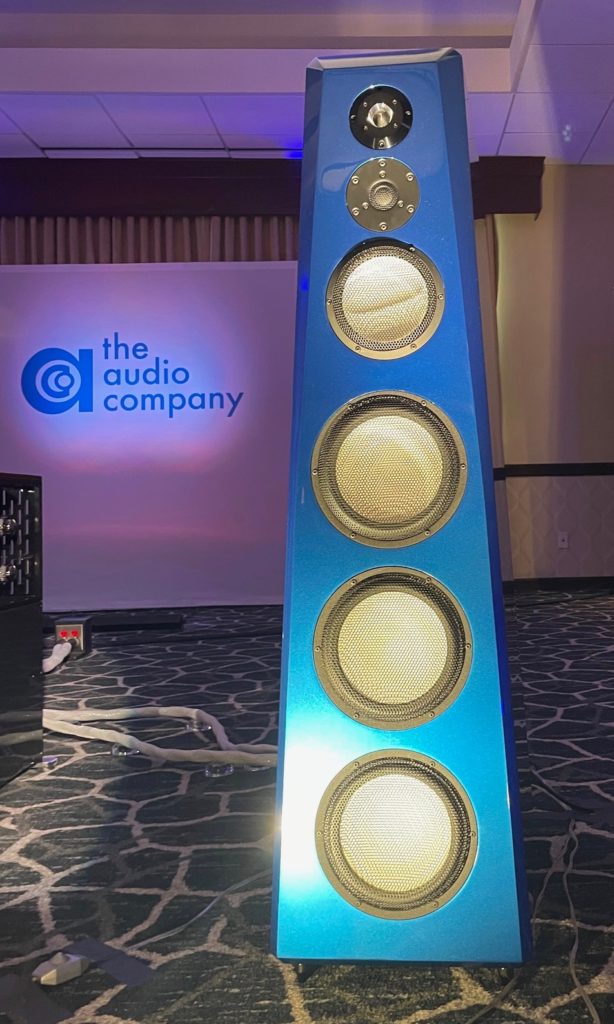 Von Schweikert Audio played two loudspeakers at FLAX 2022—the Ultra 7 ($180,000) that received its world debut in Tampa, and the Endeavor SE ($25,000), which, if not exactly new is newish, having been released during the pandemic, when audio shows with product introductions were not a thing. The Ultra 7’s forward-facing driver complement includes a dual ribbon super-tweeter, a beryllium tweeter, a 7** ceramic midrange, and three 9** ceramic woofers. Behind, the “Rear Ambient Array” consists of a horn-loaded magnesium tweeter and another ribbon super-tweeter. The Endeavor SE is a four-driver system standing 44** tall. It was sited in the middle of a large conference room that was better suited to the Ultra 7s, and which may have compromised low-frequency dynamics and extension.

Perlisten of Verona, Wisconsin, presented the world premiere of the R7t floorstander ($10,000), a design that, above all else, seeks to control directionality by utilizing a unique configuration of carbon-fiber drivers. The atmospheric opening to Stravinsky’s The Rite of Spring was riveting, and the same composer’s L’Histoire du soldat manifested perfect scaling and timbre of the seven solo instruments. But it was Donald Fagen’s “Morph the Cat” that astounded: Never before have I heard a recording with this kind of dynamic low-frequency content brought off so successfully in a small hotel room.

George Klissarov was demonstrating his new exaSound s82 streaming DAC, the stereo version of this manufacturer’s multichannel model. Its enclosure is larger than that of previous iterations, to accommodate more internal power-cleaning steps. Employing an 8083 chipset, this model can handle up to DSD 512 (earlier ones topped out at 256) as well as high bit-rate/sampling-rate PCM. Galvanic isolation has been improved, and the new product incorporates a proprietary protocol for asynchronous USB streaming. 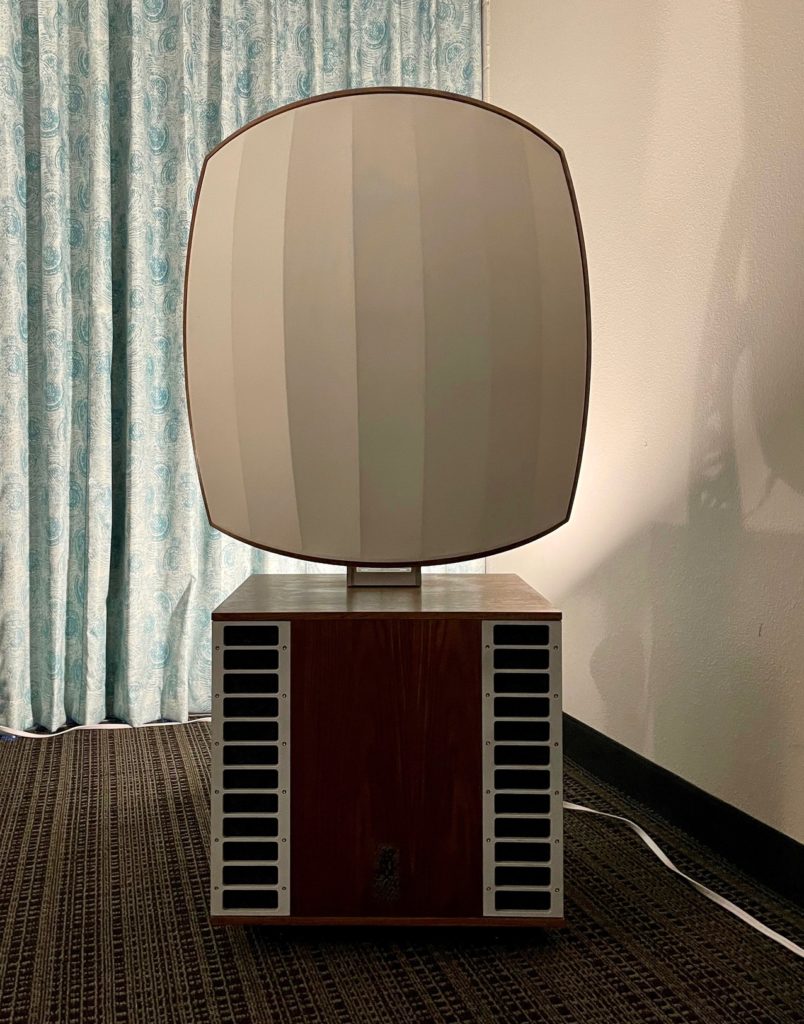 The distinctive-looking MC Audiotech Forty-10 loudspeaker ($40,000–$50,000, depending on finish and other options) is not really a new product but, for me, it might as well have been. In the course of updating the speaker to accept both balanced and single-ended inputs, the crossover network was extensively reworked. Whether or not this was responsible I can’t say, but the sonic presentation had more texture, less coloration, and better LF articulation than I remember from several previous auditions. With its unique “Wide Band Line Source” transducer—ten per side—the Forty-10 has always had exceptional transparency and top-to-bottom coherency; the latest version has the kind of dynamics and bass quality that takes it into the highest echelon of loudspeakers.

A new Italian company, Spirit Torino, offers eight headphone models in open, semi-open, and closed styles. I tried the least expensive, the Mistral ($740) and the costliest, the Valkyria ($11,100) and—acknowledging that my own experience with top-drawer headphones is limited—I found both to be comfortable and to produce a listening experience that was without colorations and provided the spatiality and perceived dynamics that a loudspeaker devotee could learn to love. The Valkyria, and several other models, use Spirit Torino’s “Twin Pulse” technology, with two drivers placed in series, an isobaric design. The Valkyria is vastly more expensive than any of the other models the company makes, with a significantly more powerful magnet array and a titanium chassis. I let the manufacturer’s rep hold the headphones while I took a photo. No reason to tempt fate. 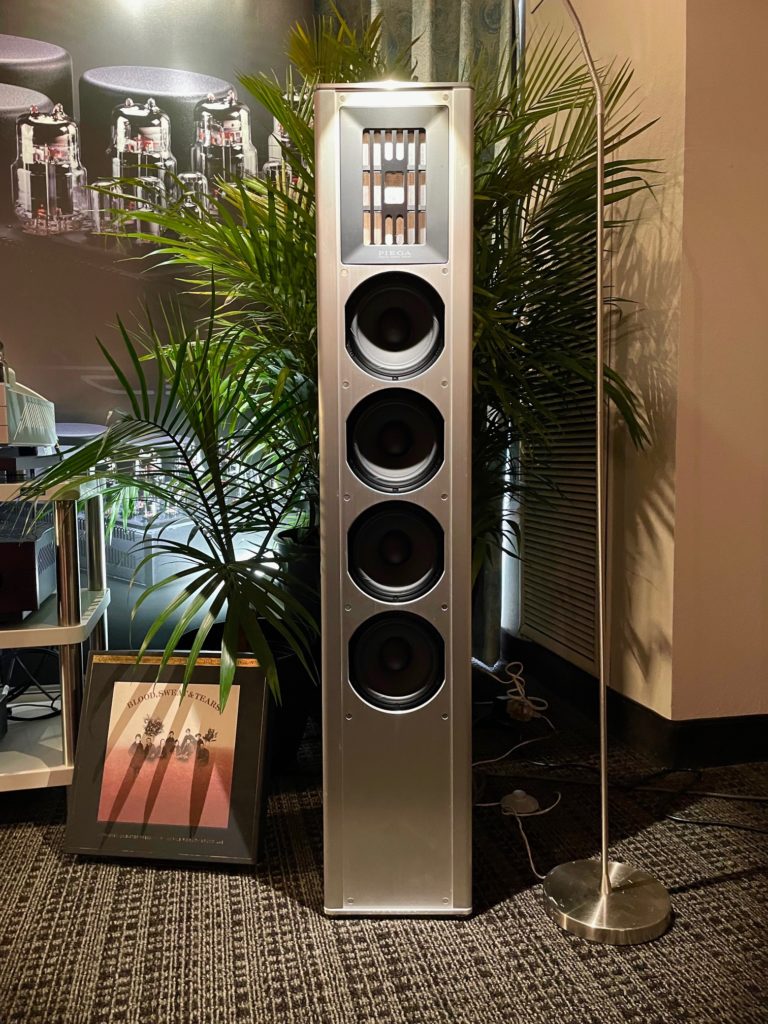 The Mobile Fidelity (MoFi Distribution) room was brimming with new products. The Balanced Audio Technology VK 80i integrated amplifier ($9995) was driving Piega Coax 511 speakers very effectively. Also in the system was the HiFi Rose RS 150 streamer/DAC ($4995), on the market since late 2021. It features a 14.9** touchscreen that spans the entire width of the component and seems exceptionally intuitive to operate—the sort of gear an audiophile’s spouse might embrace enthusiastically. Whest, a British company with a background making microphone preamps, debuted its TWO.2 Discreet phono preamp ($3495.) All the manufacturer’s phonostages are dual-mono designs; this one, the second least expensive in the manufacturer’s line of six, is intended “to complement any entry-level turntable front-end.” 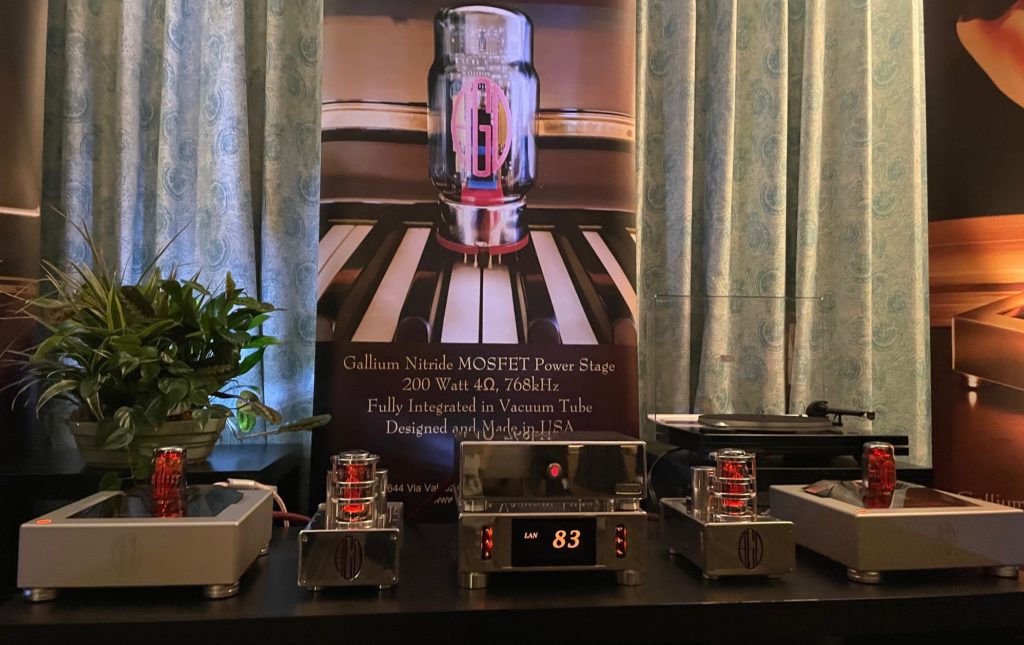 AGD Productions, based in Palos Verdes Estates, California, manufactures some excellent-sounding electronics that are not quite what they claim to be. The casual audiophile spots a small metal box with a single vacuum tube emerging from the top surface and, assuming it’s a low-output single-ended amplifier, asks innocently, “How many watts?” When the answer comes back as “200” or “400,” there are some very confused looks sent in the direction of designer Alberto Guerra. It turns out that the “tube” in view isn’t a tube at all but, rather, a small Class D amplifier operating inside a glass enclosure fabricated to look like a KT 88. It even glows, thanks to LED technology. The least expensive of the AGD amplifiers is the new Tempo stereo amplifier ($5500), a 200Wpc model that actually doesn’t display the fake tube. Guerra played a recent Beethoven symphony recording by Jordi Savall, and the amp rendered the bracing period instrument sonorities and dynamic pointing to perfection.

Making its debut at FLAX 2022 was the Creek Audio Voyage i20 integrated amplifier ($6195). It’s characterized as a Class G amp, a more efficient form of Class AB amplification; power output for the product is specified as 120Wpc into 8 ohms and 240Wpc into 4 ohms. The i20 is a full-service control center with a quality DAC, optional plug-in phonostage, Bluetooth connectivity, and a headphone jack that uses a dedicated amplifier designed to accommodate a range of loads, from 8 to 300 ohms. 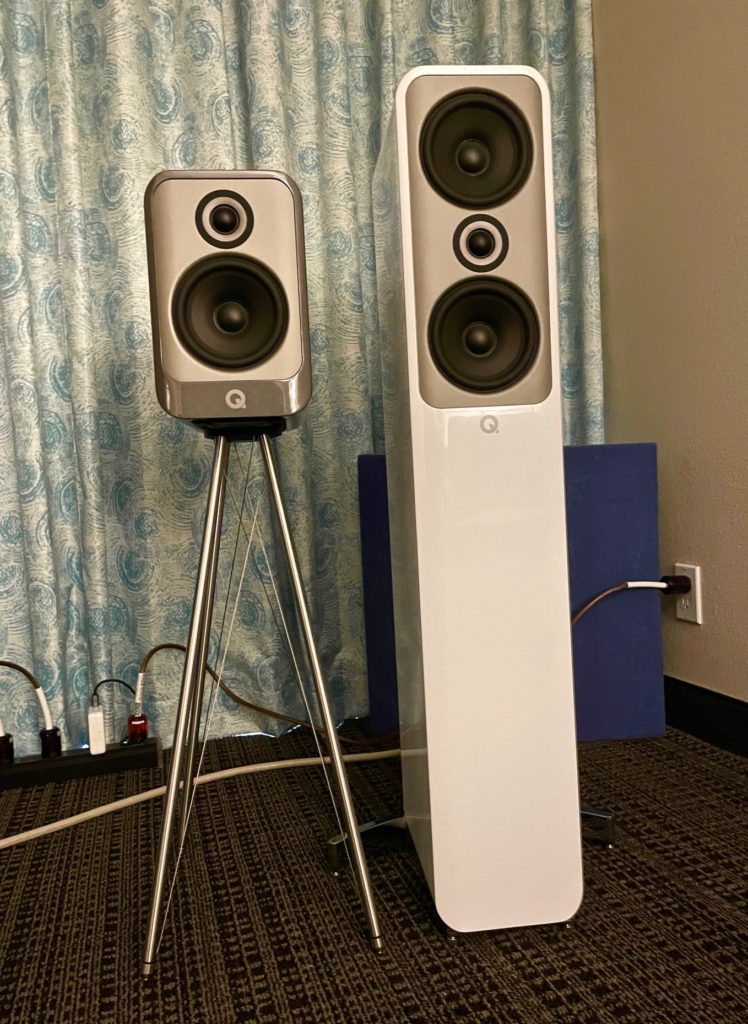 Tenacious Sound, a dealer with stores in Georgia and Upstate New York, was playing the Q Acoustics Concept 30 loudspeakers, small monitors priced at $1299/pr., $1800 with stands. The enclosure is made with Dual Gelcore between layers of MDF to dissipate unwanted vibration. The two drivers, a 0.9** tweeter and a 5** mid/bass cone, were developed specially for the Concept loudspeaker line; there are bi-wiring/bi-amping capabilities. The scaling of instruments and image specificity on the Paavo Järvi/Bremen recording of L’Histoire mentioned above was superb.

Ted Denney of Synergistic Research was holding forth in the Scott Walker Audio suite with ten new products to explain and demonstrate, including an Ethernet Switch UEF ($2295), the Tranquility UEF Linear Power Supply ($2295), and some very expensive cables—the SRX interconnect ($12,995), SRX speaker cable ($29,995) and SRX digital interconnect ($4995.) There’s a segment of the audiophile community that reacts rather…vehemently to the mention of the words “Synergistic Research” or “Ted Denney,” responding with rants that include other predictable word pairs such as “expectation bias” and “snake oil”—and that’s before it gets nasty. It wouldn’t be an audio show without a Denney Demo, and he obliged with several. Denney applied his new Carbon Tuning Discs to interconnects and the resulting change wasn’t subtle, on the order of magnitude you’d expect when substituting a meticulously built $2000 amplifier for an indifferently designed $500 product. Sorry, but that’s what I heard, and Denney wouldn’t be in business for as long as he has if a lot of others hadn’t heard it with dozens of other SR products. If you don’t hear it, don’t buy them. But spare me the rants.

The Pro Audio Design folks, now distributing the Technical Audio Devices (TAD) brand in North America introduced the TAD Evolution Two loudspeakers ($19,995), which offered impressive clarity and rich musical textures. The speaker is a 2.5-way floorstander with a 1** beryllium tweeter and a pair of 6.5** woofers. LF extension to 30Hz is claimed, believable on the basis of my short audition. With a minimum impedance of 4.5 ohms and a sensitivity of 87dB, it would not appear that the Evolution Two presents a difficult load to most amplifiers. 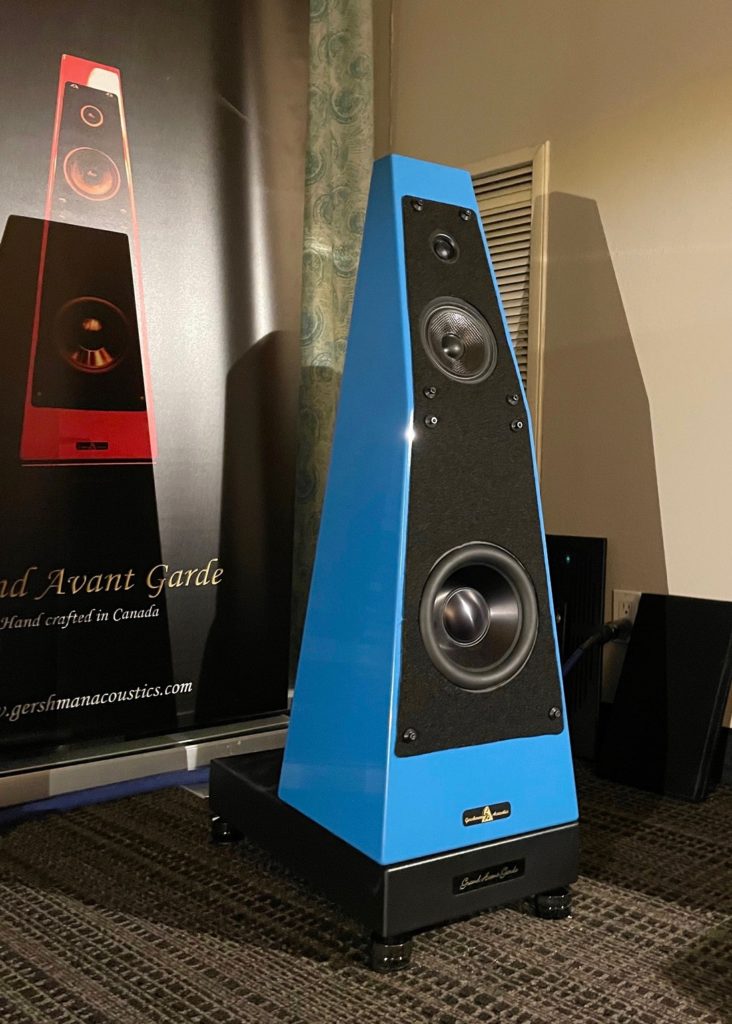 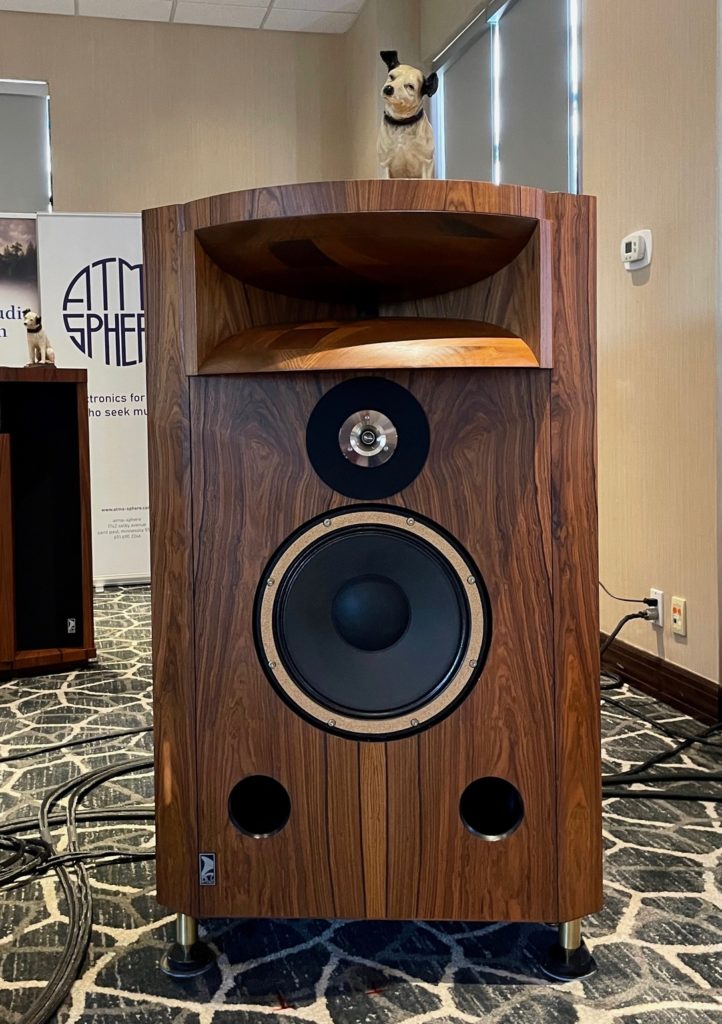 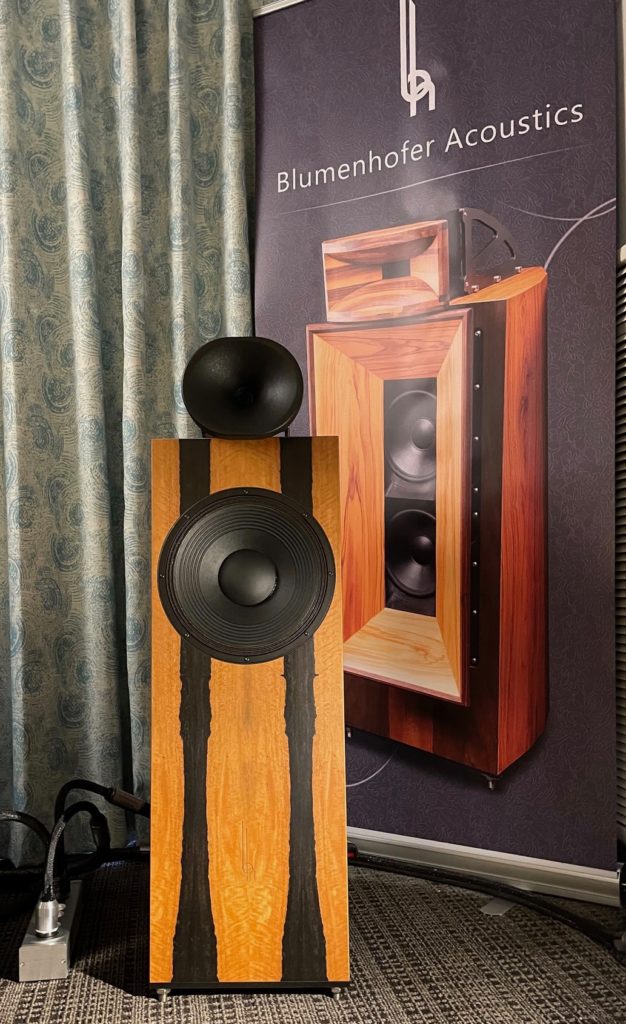 Best Sound of the Show: Acora/Ideon/VAC/J Sikora/Cardas: Yes, of course the guys with the best exhibit space have a leg up when it comes to impressing critical listeners. But it was surprising how often other exhibitors with large rooms played music at assaultive levels that didn’t show their fancy gear to its best advantage. The demonstrations that Acora’s Valerio Cora and Scott Sefton oversaw assured that a potential customer heard the considerable merits of a carefully configured system—one that put musical values front-and-center.

Best Sound for the Money: The AGD Audion MkII ($7500). These are the diminutive monoblocks just above the new stereo model from the standpoint of price in the manufacturer’s line of amplifier (see above.) It sounds great and you get to see the faux tubes.

Best Demo: Veteran Ken Stevens of Convergent Audio Technology gave a discourse on Diana Krall’s stage jitters—how there was always a point in a live performance when you could hear her loosen up. He then played the song from one of Krall’s live albums when you could hear it happen. It takes a special piece of gear to detect it—and a special kind of audiophile to bring it to our attention. Thanks, Ken.

Best Experience: On two evenings, Acora Acoustics sponsored a presentation by A-List mastering engineer Dave McNair. McNair brought along some 24-track tapes that allowed him to deconstruct several very well-known songs from the pre-digital era, pulling out single tracks and then demonstrating how the final product became more than the sum of its parts.