Last year’s CES brought us a slew of new turntables, many of them priced below $3000. Although there were some moderately priced turntables and cartridges introduced at this year’s show, CES 2013 was notable for the launch of a few ultra-exotic ’tables and arms. 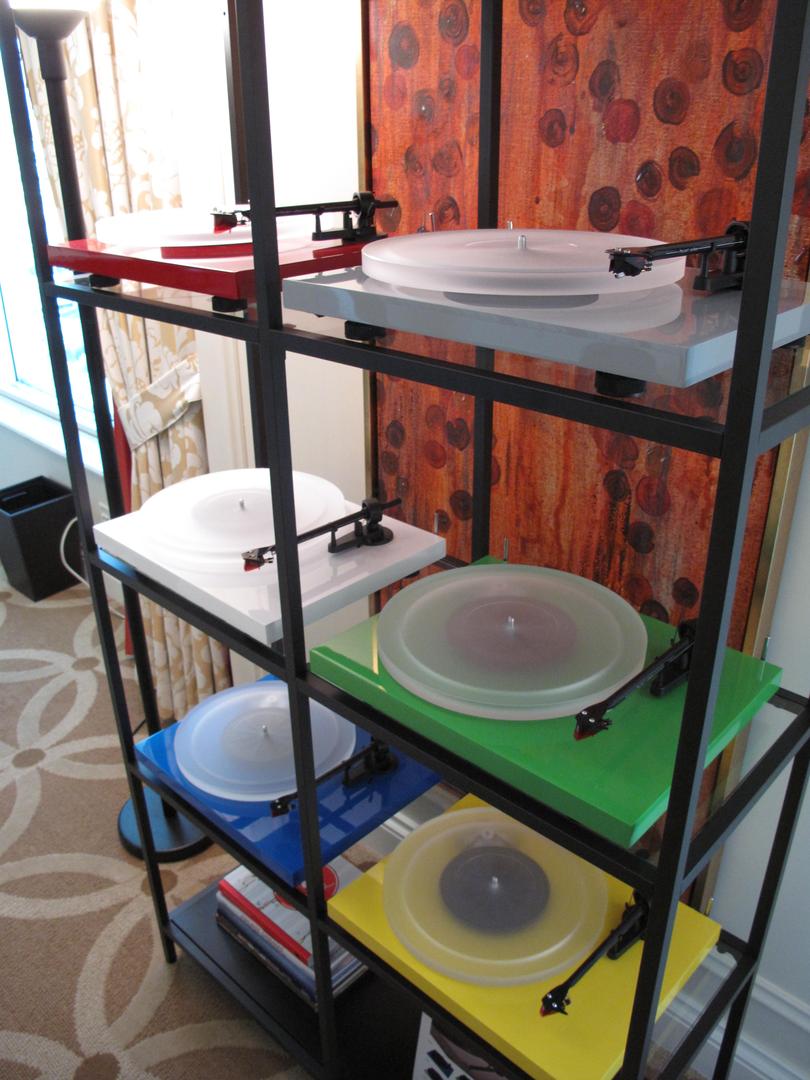 I’ll start with the affordable offerings. Pro-Ject, which introduced many new models last year, announced upgrades to its existing and extensive line of entry-level and affordable record players. For example, the $299 Essential player now comes with a gimbaled tonearm instead of a unipivot design, along with a couple of other small improvements. The price remains unchanged. The $699 Xpression III Classic has now been fitted with an improved one-piece carbon-fiber arm and integral headshell. The Expression III Classic comes with a Sumiko Pearl cartridge and VTA adjustment has been added. Pro-Ject’s only new offering is the Signature 10, a slightly scaled-down version of the Signature 12 statement ’table shown at last year’s CES. The Signature 10 features a magnetic bearing and sells for $8000 with tonearm. Pro-Ject also introduced the $499 Phonobox DS phonostage. What distinguishes the Phonobox DS from other similarly priced phonostages is the nifty front-panel display that shows gain and loading settings. 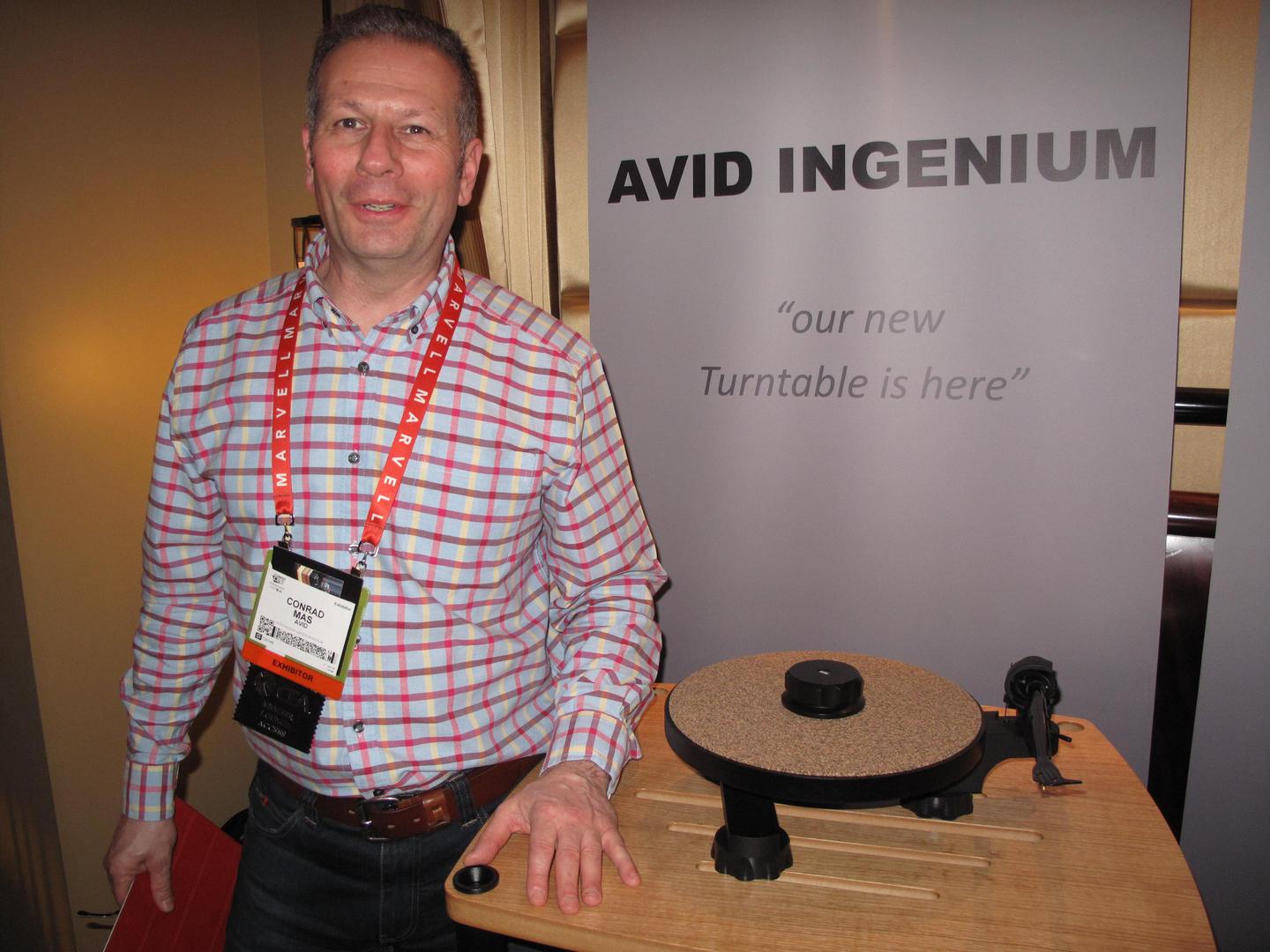 Avid turntables of England, imported by Music Direct, launched a new affordable line called Ingenium. The line brings some of the company’s upper-end design techniques to more moderate price points. For example, the sapphire platter bearing from the more upscale Diva II has been retained in the Ingenium, along with a chassis machined from 2.5″-thick solid aluminum. An optional clamping system, again from the more expensive Diva II, is available. The ’table is unusual in that there’s no chassis as such, but rather a minimalist cross-like aluminum structure that supports three feet beneath and the platter on top. The basic package comes with a Pro-Ject carbon-fiber tonearm at $2300. Options include fittings for 9″ or 12″ SME arms, or even a twin-arm mounting. The Ingenium is a significant design departure in that it lacks a traditional plinth; the approach here is to implement a smaller, but more solid, support structure. 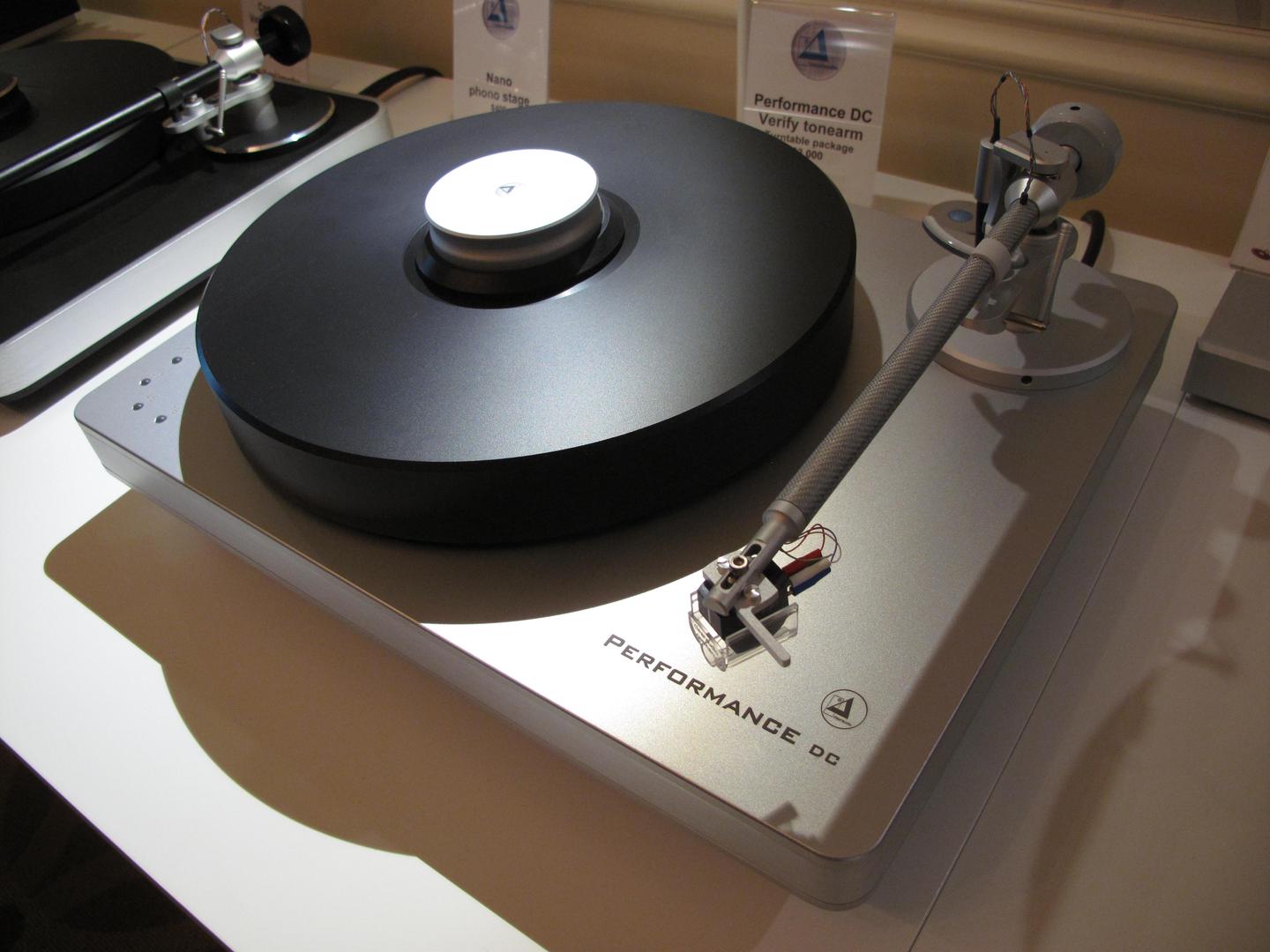 Clearaudio, through its U.S. Distributor Musical Surroundings, debuted the Performance DC ’table and arm. The turntable features a high-mass aluminum and MDF sandwich plinth, interchangeable armboards, Clearaudio’s Ceramic Magnetic Bearing (CMB), and a Verify carbon-fiber tonearm with magnetic bearing. The Performance DC looked like a lot of turntable for $3000. 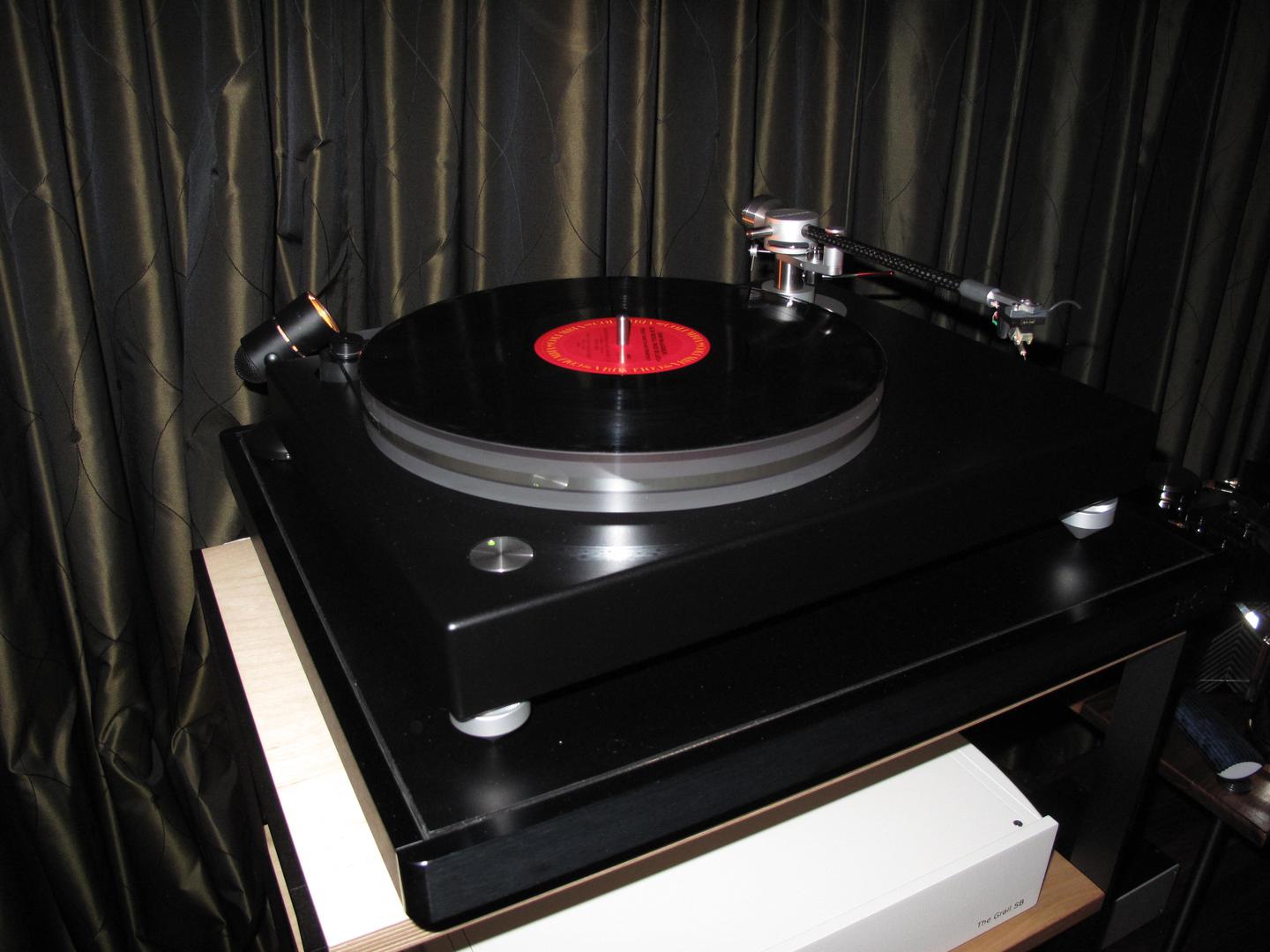 New York retailer and importer Audio Arts showed a turntable from a company I had not heard of called Holborne. The Swiss company’s Analog 2 Mk.II turntable features a separate motor controller and, unusually, a belt made from an old cassette tape. The tape’s properties are reportedly ideal for a turntable belt. Price: $7495 plus $3475 for the tonearm. 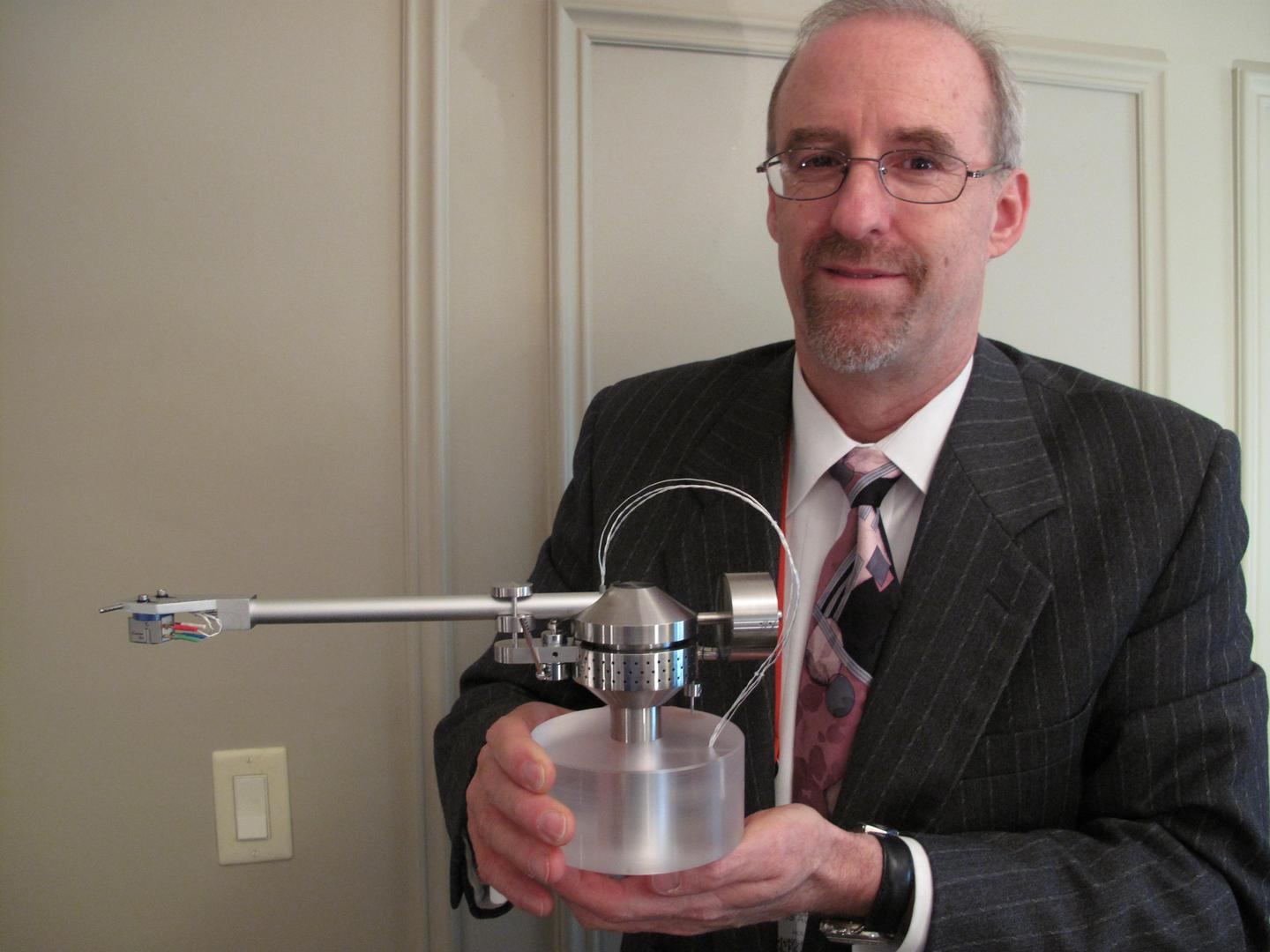 Basis Audio has been quietly working on a new arm that reportedly greatly exceeds the performance of the Vector 4. The new arm is so upgraded that it doesn’t bear the Vector name, but instead is called the Super Arm 9. The new design is built from exotic metal alloys that, when combined in the components that comprise the arm, have minimal resonance. The new armwand is reportedly 14 times stiffer than that of the Vector. The Super Arm 9 also benefits from new internal wiring. Price: $14,000. I’m scheduled to get one on my Inspiration; watch for a full comparison with the Vector 4 in an upcoming issue. 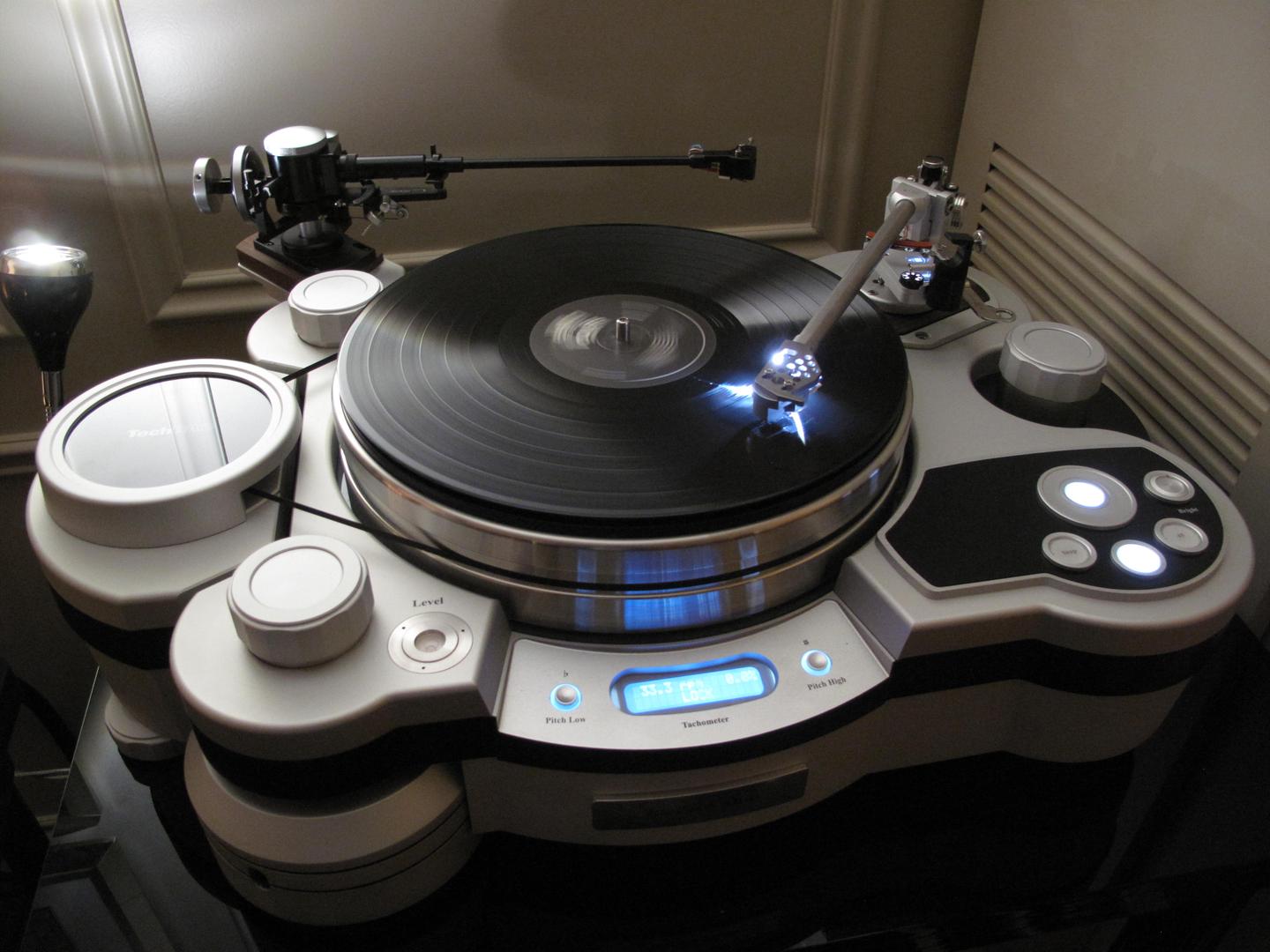 Moving on to the ultra-exotic, I saw and heard what must be the most ambitious new turntable introduced in a long time, the TechDAS Air Force One from Japan. Designed and built by former Micro-Seki engineers, the Air Force One, as its name suggests, is based on an air-bearing platter. The chassis is a three-part constrained-layer damping structure composed of aluminum on the top and bottom, with “super duralumin” in the middle. The chassis alone contributes 95 pounds of the ’table’s 175-pound weight. The 66-pound platter is composed of four distinct components, all made from different materials. An integral vacuum hold-down system couples the LP to the top platter. Turning off the vacuum by pressing a button on the chassis creates slight positive pressure to make record removal easier. The entire structure sits on three suspension pods that isolate the ’table with a combination of air and a liquid polymer. The $125,000 Air Force One (without arm) looks like a very serious (and beautiful) piece of hardware. 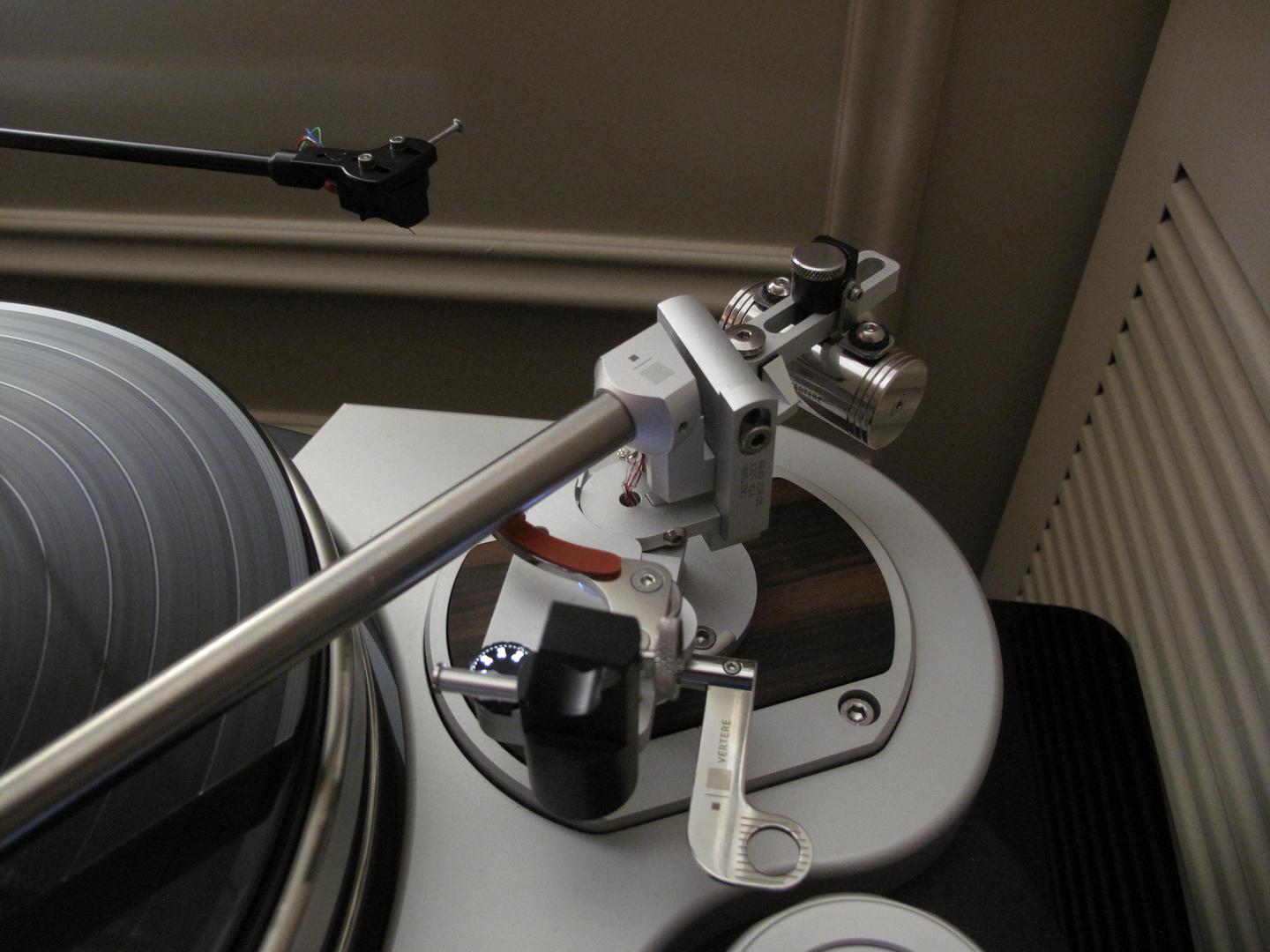 The Air Force One was shown in two rooms, both with new tonearms. The first arm is the Phantom Elite from Graham Engineering (who is also the Air Force One’s North American importer). The second new arm shown with the Air Force One is from a company called Vertere, a company created by Roksan co-founder Touraj Maghaddam. The new arm reportedly represents the culmination of everything Maghaddam has learned in 30 years of designing turntables and tonearms. The Vertere arm is a ground-up rethinking of tonearm design, and one that features some radical new ideas. One of these is a counterweight that hangs off the back of the tonearm and pivots as the arm moves up and down. According to Maghaddam, this reduces changes in tracking force when the stylus encounters a record warp. The bearing is built from a unique laminate of plastic and metal, and the arm wand is titanium. The arm’s design is focused on reducing extraneous forces acting on the cartridge so that it can do its job of responding only to groove modulation. In a nice touch, the headshell includes a tiny light to aid cueing in the dark. The Vertere arm ships in February with what must be a record retail price for a tonearm—a mind-numbing $35,000.

I had a first-hand demo of the LP-cleaning machine that everyone’s been talking about—the Audio Desk Systeme Vinyl Cleaner. The fully automated system immerses the LP vertically in a bath with rotating scrubbing brushes on both LP sides. The LP is cleaned not just with the brushes, but with ultrasound. The ultrasonic cleaning removes more dirt than the brushes, and also gets dirt out of the groove bottom where no brush bristle can reach. After cleaning, the LP is dried by air rather than a vacuum to prevent static build-up. The machines is slow (five minutes per LP, both sides simultaneously) and fairly expensive ($3895), but it looks like it might be the state of the art in LP cleaning.

In other product categories, Shunyata Research has developed its own interchangeable loudspeaker-cable terminations, including a high-performance banana plug. You order Shunyata’s cables with whatever termination you need, and if you change loudspeakers or amplifiers, you simply swap the terminations to fit your system. The connectors were all designed for sound quality first. 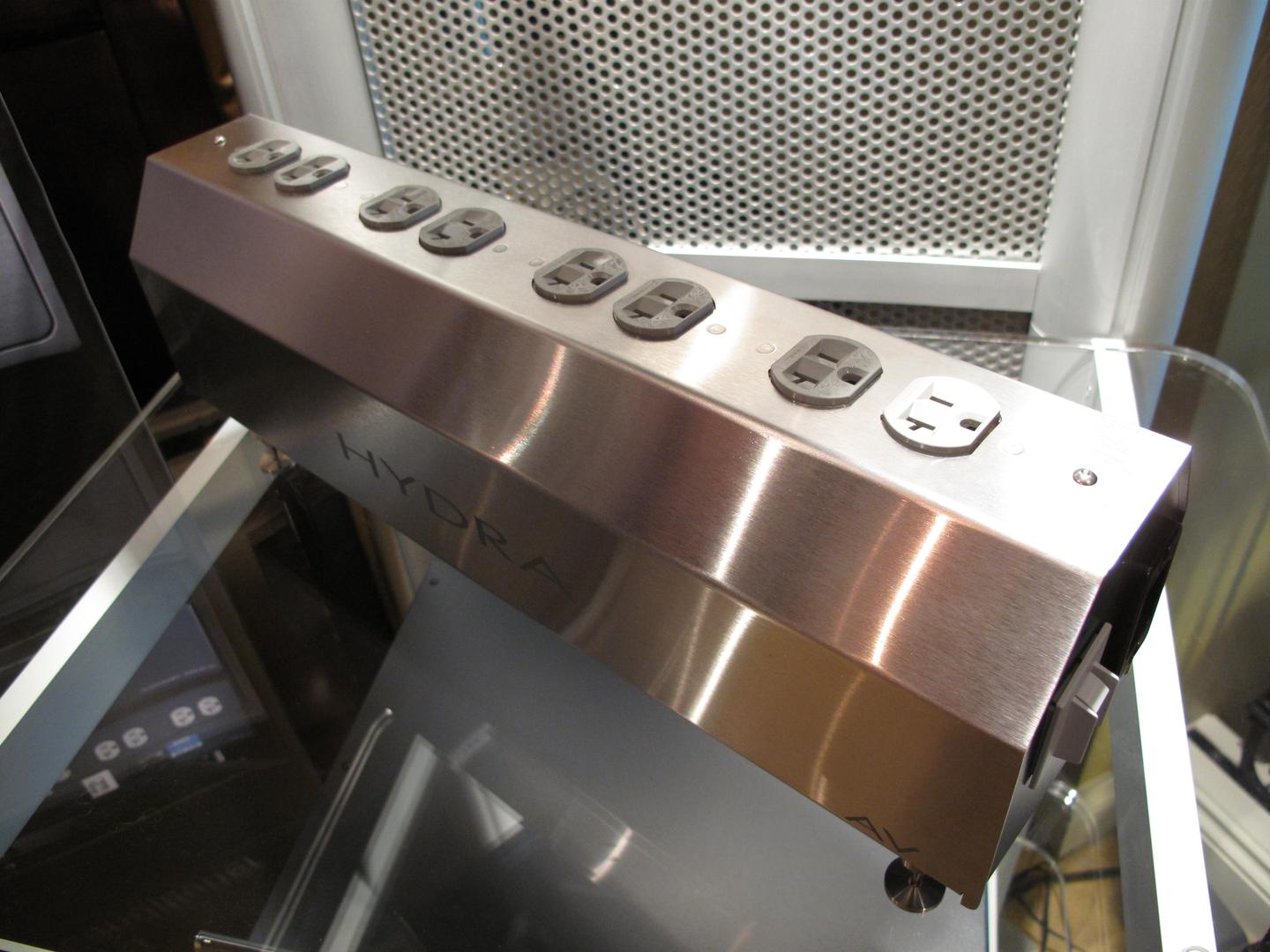 Shunyata also introduced a product that addresses an issue that I’ve encountered in more than five years of using its power conditioners: lack of rack space to mount the company’s Talos and Triton conditioners horizontally on a shelf as intended. The conditioners end up being mounted face-down behind the rack with the AC outlets facing up. This arrangement not only frees up precious rack space, it also makes the AC outlets more easily accessible. Unfortunately, the sonic performance can be slightly degraded, although I counter this by putting Stillpoints Ultra SS or Ultra 5 between the Triton and the floor. Shunyata’s solution is the new Hydra, an eight-outlet conditioner only 4″ deep that’s designed to fit behind an equipment rack. It uses the same connectors and filtering circuitry as the Triton, but the Noise Isolation Chambers are slightly shorter. The new slim-line Hydra comes with stainless-steel spiked feet and machined discs. The good news is that without the expensive aluminum front panel, the Hydra’s price comes in at $3000, a 40% reduction compared with the Triton. 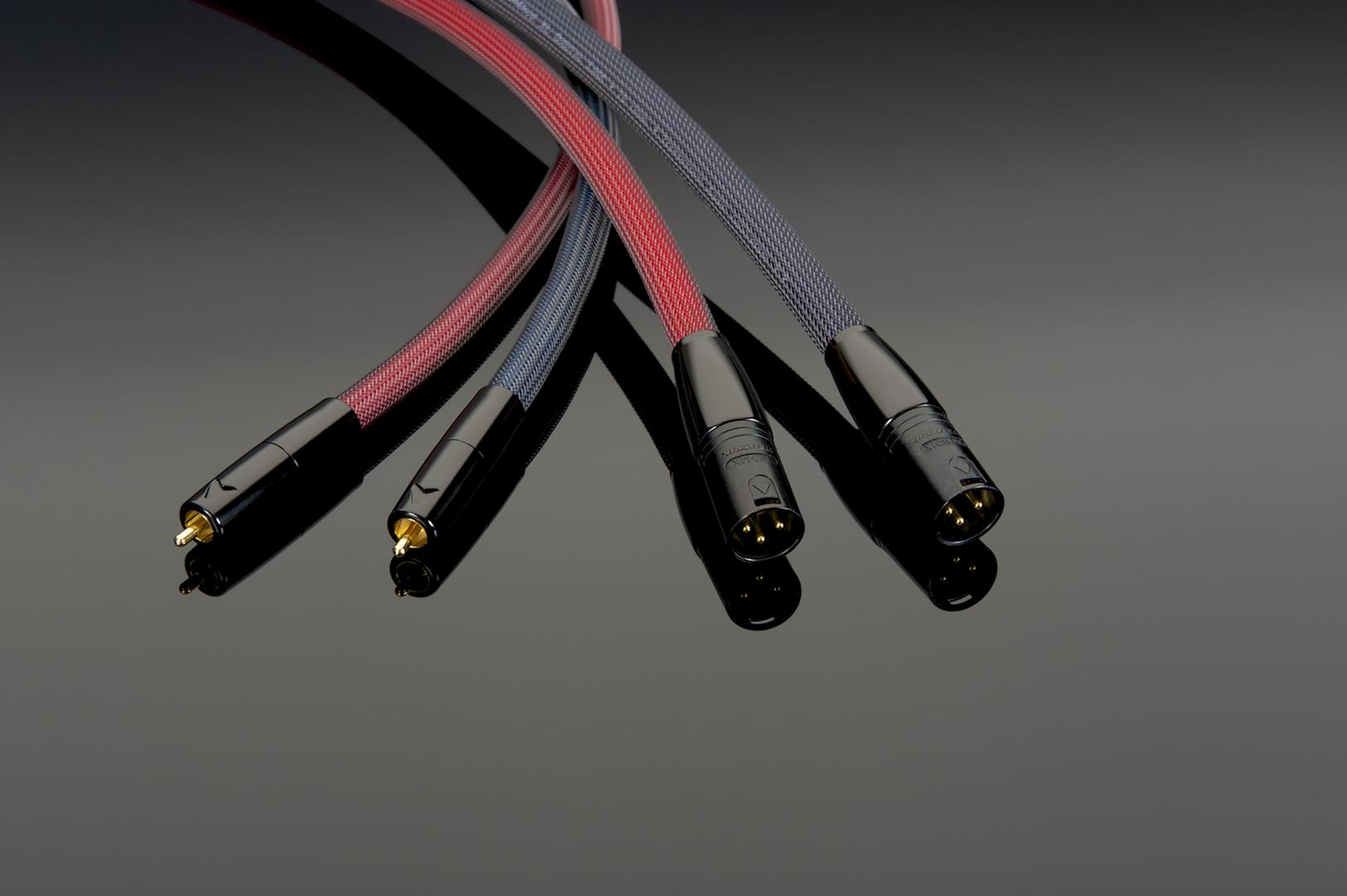 Transparent has just completed an overhaul of its long-running digital cable line, introducing at CES new models in every configuration. In AES/EBU cables, Transparent showed the Premium, Reference, and Reference XL digital interconnects, priced at $895 for the Premium, $1795 for the Reference, and $3595 for the Reference XL. RCA terminated cables start with the $99 Performance model and go up to the Reference XL at $3195, with three model in-between. The RCA-terminated High-Performance Digital Link ($395) features solid-core OFHC conductors, Teflon dielectric and multiple shields. The upper models include even more technology. USB, the hottest cable category, was well represented by Transparent’s new Performance ($95), High-Performance ($275), Premium ($595) USB cables.

The Triton 7 tower from GoldenEar Technology was miraculous at $1398 per pair, as was the minimalist Audience Clairaudient 1 + 1 at $1695 per pair. Two radically different approaches, two great values.

Magico’s new $12,600 S1 loudspeaker. Although not inexpensive, the S1 brings many of the Magico virtues to a more accessible product.

A new DSP algorithm for the Meridian DSP7200 V2 active digital loudspeaker that corrects the bass-lag problem in loudspeakers. Existing DSP7200 owners can upgrade to the new software.

The 2013 Consumer Electronics Show: Neil Gader on Loudspeakers Under $20K