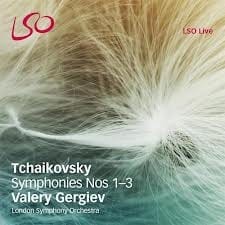 Tchaikovsky and Dvorak are in the same boat in one way—you’d think they only wrote three symphonies, but numbered them 4, 5, and 6 in Tchaikovsky’s case, and 7, 8, and 9 in Dvorak’s. While I haven’t delved into Dvorak’s earlier symphonies, Tchaikovsky’s first three are half-neglected gems, and frankly, I’ll listen to them instead of the last three any day.

The First Symphony, “Winter Daydreams,” was written when he was 26 and later revised. The themes in the first movement, had he composed them maybe 30 years later, would be full of angst and bitterness; instead, there’s playful aggression with a touch of drama. It declares his genius that you can easily imagine how he could have used the same material in such different ways. The Adagio wouldn’t be out of place in Swan Lake, with the limpid oboe melody laid over the strings and the flute ornamenting the in-between spaces; there’s more of a sense of repose than you often find in Tchaikovsky. The main theme of the following Scherzo seems almost weightless. In IV, Gergiev and the orchestra invest the surging, sighing string parts with tearful fragility. Tchaikovsky took too long building to the climax, but it is satisfying once it arrives.

The Second is called the “Little Russian” because of the three Ukrainian folk tunes used. A faster tempo in the first movement would be more effective— Gergiev comes across as too careful, and it sounds like the orchestra wants to push a little, too. That aside, the peaks and valleys form a thrilling view. The themes would be simplistic and repetitive if they came from a lesser composer’s pen, but Tchaikovsky shows off his ability to vary the colors and accompaniment. In fact, after he played the Finale at Rimsky- Korsakov’s house, he wrote, “the whole company almost tore me to pieces with rapture.” The second movement is bookended by a puckish march, unusual in that it keeps the symphony from having what would likely be a keening or sobbing adagio. The vigorous Scherzo is full of rhythmic and chromatic twists and turns; the Finale makes much of a melody that’s almost more of a scale, turning it into something both grand and invigorating.

Symphony No. 3 is called the “Polish” because of the polonaise rhythm used in the final movement, not because any folk tunes were used. Tchaikovsky had moved away from the influence of the Russian nationalist composers, and the result is polished and more fully integrated. The melodies aren’t as memorable, but the development is still natural, and a little more subdued than in the other symphonies. The slow movement has to be the calmest thing of its length Tchaikovsky wrote, and the scherzo is mysterious if treads water most of the time, but the triumphant finale makes up for it.

The London Symphony plays well, but unfortunately Symphonies 1 and 2 were recorded in the Barbican in London, a hall so dry that I doubt the brass ever have to empty their spit valves—the water must evaporate first. Symphony No. 3 was taped at the Tonhalle Zurich, a vast improvement.