The mood at this year’s Audio Fest was markedly more upbeat and optimistic than that of a year ago, and particularly that of two years ago. The show saw a record number of exhibitors, and although I don’t have official statistics, the number of attendees seemed to be up as well.

I covered upper-end ($15k and above) electronics at the show, and there was no dearth of interesting new products. In fact, I saw and heard fabulous and radically innovative electronics from two companies new to the North American market, Technical Brain and GTE.

Technical Brain amplifiers and preamplifiers have been available in other parts of the world, but have just acquired U.S. distribution through Silent Source Audio. The TPB-Zero/2 monoblock power amplifiers are no-holds-barred assaults on the state of the art in audio amplification. The signal path is extremely short and direct, with many fewer parts. For example, the emitter resistors in the output stage have been removed, replaced by a tertiary circuit, on which Designer Naoto Kurosawa holds a patent. Mechanical contacts are reduced to a minimum; all transistors in the fully balanced amplifier are hand-matched, protection relays have been removed, and careful attention has been paid to preserving the integrity of low-level signals. Mr. Kurosawa’s goal is reflected in the “Zero” moniker: Zero electronic artifacts in the reproduced sound. This brief description can’t begin to detail the level of refinement and sophistication of the TPB-Zero/2 power amplifier and the matching TPB-Zero preamplifier. Technical Brain’s preamplifier and power amplifiers have won multiple Grand Prix Awards from Stereo Sound, an unprecedented feat for a small Japanese manufacturer. They are priced at the upper end of all electronics; the monoblock amplifiers are $69,995 per pair, the linestage is $39,995, and the phonostage is $39,995.

I heard the TPB-Zero/2 amplifier and Zero preamplifier in two separate rooms, one driving the TAD CR-1 loudspeakers and the other driving TAD’s large Reference One models. The sound was extraordinary in both rooms, with exceptional dynamic authority coupled with a breathtaking transparency that gave the impression of hearing right through the amplification to the source. The resolution of extremely fine micro-dynamic detail was phenomenal. It didn’t hurt that the Technical Brain electronics were surrounded with the fabulous TAD loudspeakers, the Walker Proscenium Black Diamond turntable, and Silent Source signal cables and AC power cords. (Jonathan Valin has blogged about Technical Brain on avguide.com, and now that they have U.S. distribution, will be conducting a full review.) 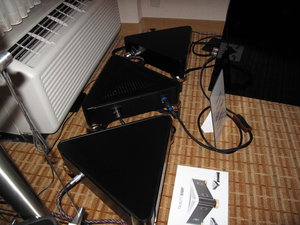 I was also greatly impressed by a preamplifier/DAC and monoblock power amplifiers from Germany’s GTE. GTE is the acronym for the English translation of the company’s full German name, Company for Technical Developments. These electronics are another cost-no-object attempt to create the world’s best electronics. GTE has been in business since 2006, and was at the Rocky Mountain Audio Fest looking for a U.S. distributor. Designer Ditmar Brauer spent half an hour with me explaining the myriad technical innovations in the products. The Trinity preamplifier/DAC has the distinction of being one of the most expensive product of its kind in the world (42,000 Euros or $57,950 at today’s exchange rate; the price is the same worldwide), but this is no boutique product aimed at the status-conscious elite. Rather, it is simply the realization of what Brauer believes is the ultimate DAC topology. For starters, the three-chassis Trinity DAC employs 16 Burr-Brown PCM 1704 DACs per channel that are driven by a 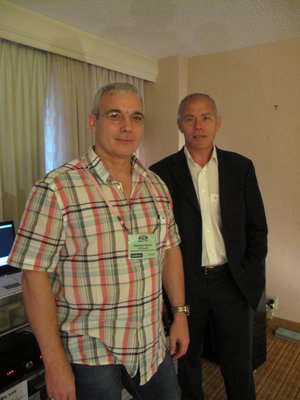 time-interleaved signal. That is, each DAC is driven by an input signal that has been delayed slightly in relation to the preceding DAC. The DAC outputs are all switched together, resulting in an analog output waveform in which the classic stair-step structure is much finer, smoother, and closer in shape to the original sine wave. In fact, the waveform is so smooth that the Trinity DAC allows you to bypass the digital filter entirely when playing high-resolution sources (three selectable filters are available for standard-resolution sources). The measurements presented in the brochure are the best I’ve seen on any DAC.

The Trinity DAC is engineered to work as a system with the company’s Trinity monoblock power amplifiers. Each monoblock consists of two chassis (amplifier and switched-mode power supply), making the complete GTE system (preamp/DAC and pair of monoblocks) a seven-chassis affair. The amplifiers are rated at 1000W, and have a bandwidth of 1MHz. Price: 45,200 Euros ($62,375). I heard these electronics driving the outstanding Kaiser Kawero loudspeakers and thought it was one of the best sounds of the show. 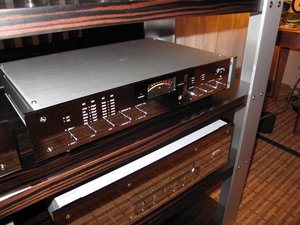 There’s been a proliferation of upper-end phonostages, and Burmester has joined the party with its Top Line Phono Preamp 100. The unit is packed with features, many of them never seen before in a phonostage. The front-panel LED meters can be set to show the left and right channel levels, or to indicate the levels driving the optional on-board analog-to-digital converter. The A/D converter’s output can drive a music server for archiving your LP collection. Other features include an automatic channel-balance adjustment, the first in a phonostage, as well as two inputs that independently remember the gain, loading, subsonic filter setting, and other parameters. Price: $16,000 to $22,000 depending on configuration. 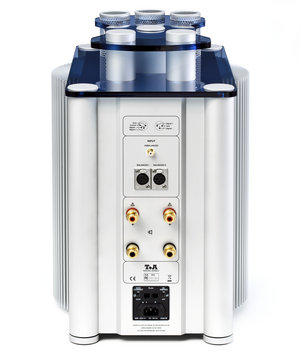 Another German manufacturer, T+A (now distributed in North America by Dynaudio North America) debuted its new flagship amplifier, the M 10 monoblock. The M 10 is a hybrid amplifier that combines tubes in the input and driver stages with a solid-state output stage. All the voltage amplification is provided by the pure Class A tube circuit; the output stage merely increases the current. The amplifier features no global feedback. The output stage is unique in that it consists of two separate channels that can be wired in parallel to increase the current drive, or connected independently for bi-amping loudspeakers. The output stage is also unusual in that the user can select between “High-Current Mode” and “High-Power Mode.” The former lowers the rail voltage and doubles the bias current, enabling the M 10 to deliver 60W of Class A output power (and 250W in Class AB). The latter mode reduces the amount of Class A output power, but increases the Class AB output power rating to a whopping 1000W into 4 ohms and 1600W into 2 ohms. Price: $33,000 per pair. 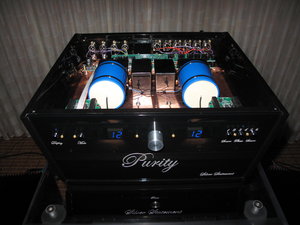 On the tubed front, I saw a very ambitious all-tubed linestage from a relatively new company called Purity Audio. The Purity Silver Statement linestage ($14,995) is a beautifully built two-chassis unit in which the inverted-and-truncated pyramid-shaped chassis housing the audio circuits rests atop the power supply. The fully balanced, all-Class A amplification section features transformer-coupled inputs and outputs, along with an autoformer-based volume control. The active electronics can be bypassed, turning the Silver Statement into a passive attenuator. No circuit boards are used anywhere in the unit; it is made entirely with point-to-point wiring. Sockets for the 12AU7 tubes are made from Teflon with silver contacts. Purity Audio also makes less expensive implementations; the Purity Reference is $7995; the Purity One is $3995, and the Basis Pre 1.1 is $2995. 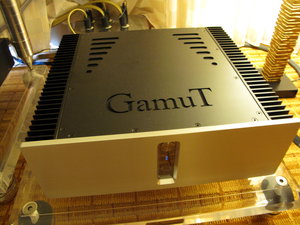 An American company with the Japanese-sounding name of Doshi Audio demonstrated its Alaap V2.1 full-function preamplifier ($14,995) and Jhor monoblock power amplifiers ($18,995 per pair). The Alaap V2.1 employs a solid-state gain stage on the moving-coil input (20dB of gain) followed by a triode phonostage with passive RIAA equalization. The linestage circuitry is all tube, and the volume is controlled by a 31-position transformer. The unit is beautifully built, and is loaded with top-grade components. The linestage and phonostage are available separately. The Jhor power amplifiers are based on a push-pull pentode output stage, delivering 90W.

It’s always hard to pick a single “best sound” because the selection of source material can influence one’s judgment. But I will say that I had a startling experience with the Magico Q5s; I opened my eyes at the conclusion of Nojima Plays Liszt, played on a one-to-one open-reel copy of the original master, and was momentarily startled to find myself in a small hotel room with a pair of speakers in front of me. I was also enthralled by the sound of the Technical Brain electronics driving TAD loudspeakers through Silent Source cables in two separate rooms, by the Kaiser Kawero speakers driven by GTE electronics, and the Hansen Emperor powered by Aesthetix electronics and Clearaudio analog front end. I must also mention the extraordinary sound of the Wilson Sasha driven by VTL electronics with a dCS digital front end and a Basis Inspiration analog front-end, all connected with Transparent cable.

The Naim Ovator S-400 ($5250 per pair) not only sounded fabulous, but the system stood in stark contrast to most of the show’s other systems. Instead of a room filled with gear on the floor, the Naim electronics were housed in a compact rack at the room’s rear, leaving only the loudspeakers in the front of the room, turning the focus to the music. This new scaled-down Ovator, with its flat Balanced Mode Radiator driver, was extremely smooth yet lively, massively dynamic, and highly engaging musically.

The LSA1 Statement monitor from the LSA Group sounded far better than any $2700-a-pair loudspeaker should. This small two-way had exceptional dynamics, surprisingly deep bass extension, great image focus, and a smooth and extended treble courtesy of the ribbon tweeter.

The North American introduction of the Technical Brain TBC-Zero/2 power amplifier and TBC-Zero preamplifier. From what I’ve seen of the circuit, and what I heard in two separate rooms at the show, these electronics might establish a new benchmark in resolution and transparency.

The startling advances in dynamic loudspeakers. As innovators raise the bar in loudspeaker performance, other companies are forced to improve their products, increasing the value proposition across the board. Concomitantly, I heard far fewer highly colored loudspeakers at this show than at previous Audio Fests.

TAS at RMAF 2010: Steven Stone on Digital and New Technologies