Chris Martens on Loudspeakers Priced Under $20,0000

This year at RMAF the TAS editorial team tried an experiment where two team members—Neil Gader and I—jointly shared responsibilities for covering one very large product category; namely, loudspeakers priced under $20,000 per pair. Neil sampled speakers exhibited in the Marriott’s Atrium tower, while I focused on speakers shown in the Summit tower. Although “divide and conquer” was the order of the day, I believe Neil and I both paid at least a few visits to exhibitors in one another’s towers, so that there may be some overlap between our reports.

Despite our country’s slow recovery from the great recession, the mood at RMAF was upbeat, energetic, and focused on value as never before, which made the sub-$20k speaker category a hotbed for new developments and ongoing product refinement. To give my report a bit more clarity and focus, I’m going to divide the category into four evenly divided price brackets, and then tell you which models captured my attention in each.

In this price class, which has historically represented the tipping point between high-end sound and ultra high-end sound, I thought three speakers stood head and shoulders above their peers 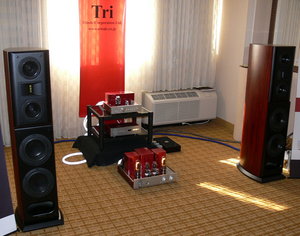 The Acoustic Zen Crescendo $16,000) is a large (50″-tall), three-way, five-driver, transmission line-loaded loudspeaker that it is on the one hand a true full-range design yet that manages, on the other hand, to offer a delicate, refined, and highly focused—much like a top-tier two-way monitor. In short, the Crescendo seems to track with the scale of the music, sounding “big” only when the music calls for expansiveness and dynamic power. 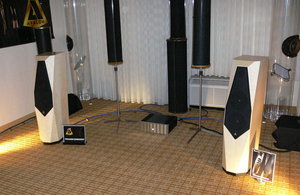 The Avalon Transcendent ($15,000/pr.) is a two-way, three-driver floorstander that can, in a sense, be viewed as a “baby version” of Avalon’s larger, more costly Time loudspeaker. Where some Avalon models can sound slightly cold or analytical, the Transcendent manages to be at once highly revealing yet also accessible and capable of tapping the natural warmth of live music. Though not a terribly large speaker, the Transcendent offered surprisingly good bass extension, too. 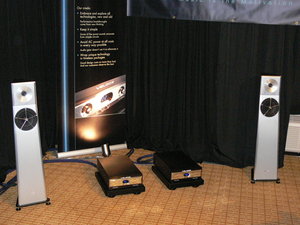 The YG Acoustics Carmel ($18,000/pr.) is a slim, two-way, two-driver floorstanding speaker that can do absolutely astounding things in small-to-mid-size listening rooms like those at RMAF. The Carmel is a near full-range design that, despite its two-driver configuration, played surprising loudly and produced soundstages so wide and deep that RMAF listeners were visibly wowed by what they were hearing. I was struck, as were other attendees, by the Carmel’s ability to retrieve tons of musical information and details, yet to avoid presenting that information in a cold or analytical way. Instead, the Carmels focused on revealing the energy, life and sheer joy of the music at hand. 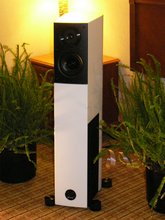 Audio Physic is back in the U.S. in a big way, as the new Virgo 25 ($12,500/pr.) so vividly demonstrates. The Virgo 25 is a fairly conventional looking three-way, four-driver floorstander with Audio Physic’s signature side-firing, “push-push” woofers. But as you probe deeper you’ll discover the Virgo is chockfull of fresh thinking (and numerous, strikingly clever design techniques) that all work together toward the goal of decoupling the speaker’s driver units from the speaker enclosure. The aim, of course, is to let you hear the speaker—not the box, and as near as I could tell it really works. As a result, the Virgo 25 offers terrific clarity and purity, with a low, low noise floor. 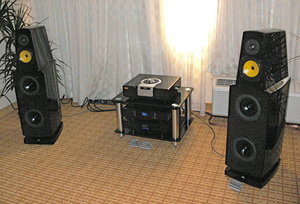 The Music Culture Technology MC-331 is a four-way, four-driver floorstander that reminds me, in many respects, of a slightly more warmly voiced version of the terrific Electrocompaniet Nordic Tone speaker—but for less than half the price. $10k certainly isn’t chump change, but for this speaker it’s a very good deal—if not an outright bargain.

Two very different models in this class distinguished themselves at RMAF, one of which was new for this year’s show, while the other was an acknowledged winner that debuted at last year’s RMAF. 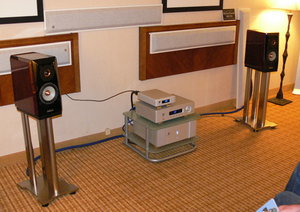 Joseph Audio’s Pulsar ($7000/pr.) two-way standmount monitor took up where it left off at last year’s RMAF, convincing new groups of listeners that it really is possible to enjoy near full-range performance from a small-ish monitor speaker. Even more so than at last year’s show, the Pulsar sounded refined and quite full-bodied, so that even on pieces featuring pipe organ material the speaker acquitted itself admirably.

Perhaps my personal favorite of all of this year’s RMAF loudspeaker discoveries came in the form of Naim’s Ovator S-400 ($5,250/pr.) floorstander, which is a downscaled version of the Ovator S-600 that debuted at last year’s show. Both Ovators feature the innovative NXT/BMR (Balanced Mode Radiator) driver, which behaves as a pistonic driver at midrange frequencies but then transitions to become a ripple-motion driver at higher frequencies. The Ovators also feature special decoupling technologies to isolate the BMR driver from the speaker enclosure and the enclosure from the floor. The result is a speaker that offers superb midrange/treble coherency and dispersion, with really exceptional bass pitch definition.

In this category I’d like to single out five models that showed remarkable performance potential and great value for money. 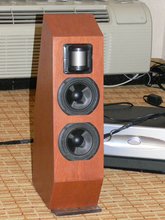 Anthony Gallo Acoustics was demonstrating a prototype of its not-yet-released Classico 3 loudspeaker (projected price, $2000/pr.), whose intended purpose is to deliver much of the performance of Gallo’s critically acclaimed (but very futuristic-looking) Nucleus Reference 3.1 speaker, but in a smaller and more conventionally styled enclosure. The little Classico3’s are two-way, three-driver, mini-floorstanders that stand just 26” tall, yet they easily filled their demo room with sound and cast images much larger and taller than you might think possible. 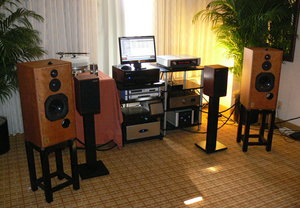 TAS writer Dr. Robert E. Greene has commented favorably on Harbeth designs many times, and I’m ready to join in, too, now that I’ve heard Harbeth’s Super HL5 ($4995), a beautiful three-way, three-driver standmount monitor cast, more or less, in the mold of classic BBC studio monitors from the past. If you wanted to, you could analyze this speaker’s strengths using the usual catalog of audiophile virtues, but that would be missing the central point. These babies purely and simply manage to sound like music, while leaving the all-important element of natural, organic warmth intact (an essential musical ingredient that, through many über-speakers, often gets lost in translation). 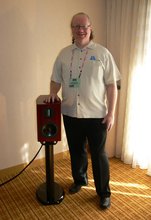 LSA’s Statement 1 standmount monitors ($2600) have shown up in previous show reports, yet somehow they remain one of high-end audio’s semi-undiscovered secrets. So please, don’t let the low-ish price fool you; the Statement 1’s are among the best two-way, ribbon driver equipped monitors available at any (sane) price, provided you drive them with electronics good enough to show what they can do. I heard airy highs, smooth and articulate mids, astonishingly full-bodied bass, and killer imaging, which were helped along by LSA’s hybrid tube/solid-state integrated amplifier. 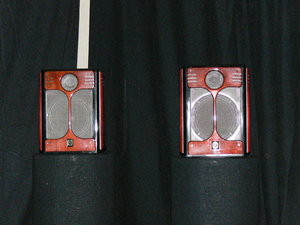 The Studio Electric Monitor ($2295) represents a break from design themes established in the firm’s higher-end models (some of which look almost like 21st-century avant garde sculptures). Instead, the Monitor offers what might be termed “Arts and Crafts” styling—kind of like what might happen if you handed William Morris or Gustav Stickley a plain black two-way monitor and asked them to dress it up a bit. But the sound is what really matters, and where the Studio Electrics succeed in particular is in combining reasonable neutrality with an uncanny ability to convey the dynamic energy and “life” inherent in good recordings. 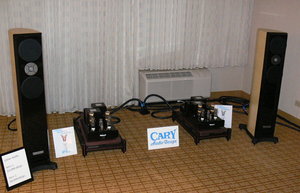 Usher’s Dancer Mini 2 Diamond DMD ($4995/pr.) was sounding even better, and playing even further above the rim, so to speak, than it had at its debut at CES this past January. This two-way, three-driver speaker uses Usher’s new DMD (diamond-metal-diamond) tweeter, which I think represents a step forward from the earlier, critically acclaimed Be-series tweeter. Those of you who know and love the sound of Usher’s  BE-718 two-way monitor will want to know that this speaker offers comparable purity and articulation, but plays much louder and goes much lower.

Two high efficiency designs in particular caught my ear at RMAF, though each had a distinct sonic personality. 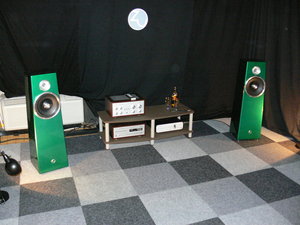 The first was the colorfully named Zu Audio Soul Superfly ($2600/pr.), which is in essense a hot-rodded version of the somewhat less expensive Zu Soul. Speaking as a guy with hobbies outside of audio (yep, that’s my Ducati Hypermotard calling to me from the garage), I just love Zu’s proposition that the Soul Superfly is a high-value/high-performance/high-end speaker that is so reasonably priced that it will leave you with at least some funds left over for non-audio pursuits. The Soul Superfly sports a 10.3” quasi-full-range driver whose output is augmented by a horn-loaded composite dome tweeter. As a 16 ohm speaker with 101 dB sensitivity, the Soul Superfly is a piece of cake for small tube amps to drive, and it exhibits a delightfully lively and, well, soulful sonic persona. 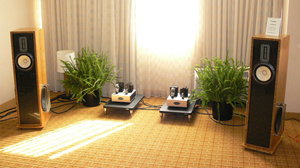 The second was the gorgeous Vaughn Zinfandel ($6495/pr.), which is a wonderfully clever variation on single-full-range-driver theme. The Zinfandel is a tower-type speaker whose core driver is a quasi full-range Fostex unit. But designer Jim Vaughn doesn’t stop there. Instead, he augments the Fostex with a rear-firing 8” passive radiator, a 5” ribbon tweeter, a side-firing 12” woofer, and a side-firing 12” passive radiator. By bringing these supplemental drive units into play, Vaughn is able to overcome two of the main problems that typically limit single-full-range drive designs: namely, bass that doesn’t go low enough with adequate authority, and upper mid and highs that are often beamy and a bit brash. In short, Vaughn’s approach leverages the purity and coherency of the Fostex driver, while beautifully compensating for its limitations. All in all, a brilliantly balanced design that sings effortlessly with high-quality, low-powered tube amps.

The Magico Q5 speaker system as powered by Spectral electronics. Most of us are pursuing a sort of “Platonic ideal” of clarity, neutrality, accuracy and transparency to the source. This system comes as close to hitting the center of that theoretical target as any I’ve ever heard, at any price.

The Naim Ovator S-400 loudspeaker as driven by Naim electronics and source components. If heard from behind a visually opaque but sonically transparent scrim, I think this $5250/pair speaker system could easily pass for a system two-to-three-times its price, meaning it offers terrific sonic sophistication/dollar. 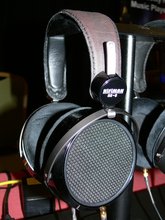 HiFiMAN HE-6 planar magnetic headphones. Here’s the deal: HiFiMAN’s new flagship ‘phones offer listeners essentially all of the resolution, dynamics and frequency extension of top-tier, five-figure loudspeakers—for just $1199! It doesn’t get much sweeter than this. World-class sound has never been more accessible to music lovers on a budget.

TAS at RMAF: Neil Gader on Electronics Under $20k and Loudspeakers Under $20k

TAS at RMAF: Jonathan Valin on Loudspeakers Priced at $20,000 and Above