When I reviewed it some years ago, the TAD Compact Reference or CR1 was the best stand-mount loudspeaker I’d ever heard in my room—or anyone else’s for that matter. Today it continues to represent state-of-the-art performance and a level of design and finish that leaves audiophiles breathless. In my view it owes the lion’s share of its success to two factors—TAD’s pure beryllium coincident driver technology, and the talent of its lead engineer Andrew Jones. It is also among the most expensive stand-mount loudspeakers at a gulp-worthy $42,000 (with stands, at least)—pricey even for the well-heeled among us.

My hope was that with the debut of TAD’s lower priced Evolution line a couple of years ago, the company would soon bring to market a more affordable three-way stand-mount to follow in the CR1’s footsteps. First out of the chute, however, was the Evolution One (E1), a delightful three-way floorstander—kind of a midi-version of TAD’s wide-body Reference Model One. Now enters its little brother, the Compact Evolution One or CE1.

I’m not going to lie: I was surprised when I gave the CE1 the once-over at its premiere at CES. I assumed its look would adhere to the same conceptual page that produced earlier TAD efforts. It turned out to be a complete departure. So much so that I was reminded of the line from the delivery-room doctor who, when the new dad worries that his baby doesn’t resemble him, says, “Well, at least we know who the mother is.” That’s the kind of switched-at-birth look the CE1 engenders. The CE1 is less the result of an auteur’s vision than the previous models, and more of a group effort from the TAD design team led by Toru Nagatani.

While surprising, the fact that the CE1 cabinet profile departs from the complex and expensive teardrop design of the CR1 is easily explained. The thorny issue of cost-containment likely guaranteed the conventional narrow-baffle-box approach. The three-way, bass-reflex enclosure, composed of a combination of birch plywood braces and MDF panels, is beautifully executed, however. An attractive olive wood veneer vertically wraps around the front baffle, top and rear panel providing a nice contrast of surfaces. The CE1’s physical strength and rigidity are evidenced in the new Bi-Directional ADS (aerodynamic slot) port, constructed of 10mm-thick anodized aluminum side panels with long, thin slots and flared openings to the front and rear. A fascinating design, the symmetrical front-back, left-right layout extends vibrational damping and eliminates the effects of unwanted sound from a conventional circular or slotted port. In addition, optimization of the enclosure’s size and port layout are said to have eliminated standing waves up to 250Hz. 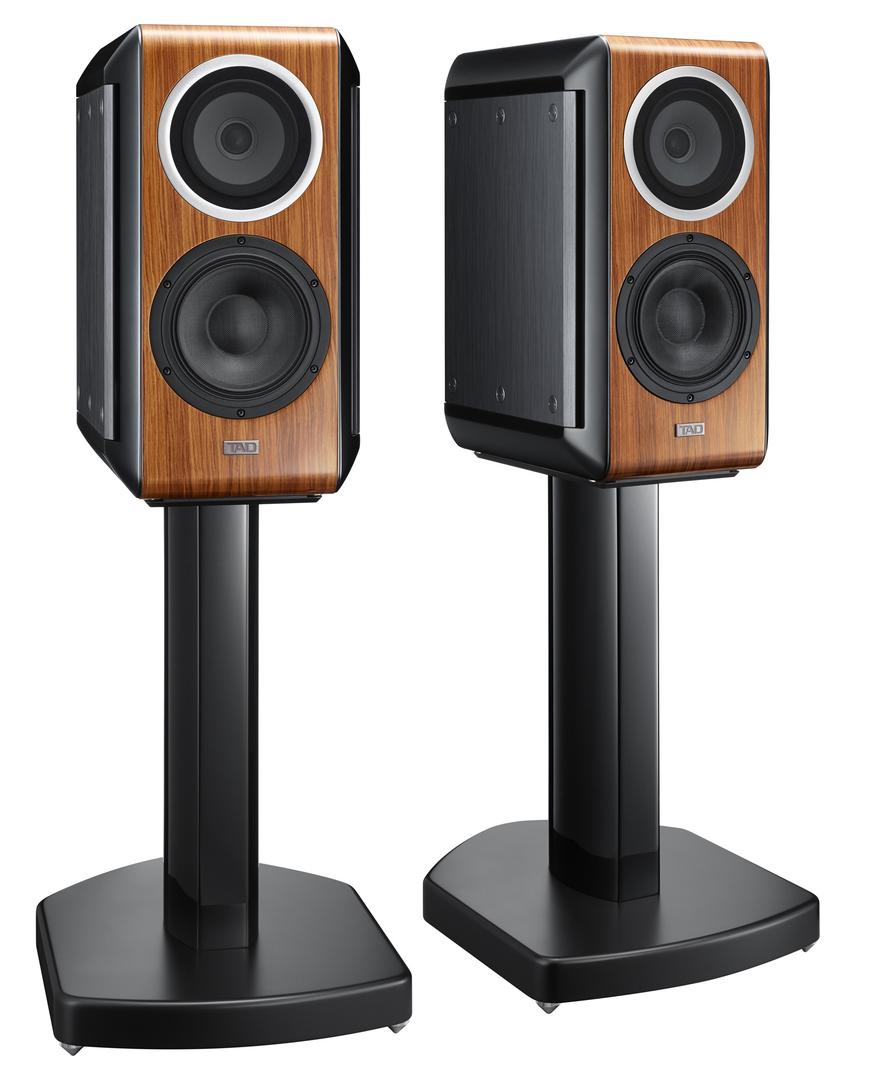 The drivers will be familiar to TAD-watchers. Always topping the marquee is the CST (Coherent Source Transducer), a proprietary coincident driver that uses the 1 3/8″ beryllium-dome tweeter of the Reference Series. Manufactured in the company’s Japanese factory (as are all TAD drivers), the tweeter dome is made by TAD’s own vapor-deposition process, a method that TAD argues yields a grain structure superior to conventional stamped beryllium domes. A 5.5″ magnesium midrange has been substituted for the far more costly 6.5″ beryllium unit of the Reference line. The 7″ woofer uses a diaphragm made of layers of laminated woven and non-woven fabric. The cone is coupled to a 3″ voice coil with a powerful neodymium magnet. (The CR1 uses a larger 4″ coil.) Crossover points are set at 250Hz and 2kHz. Less than inspiring are the awkward single-post floor stands (optional). They have such a large plinth that the CE1’s footprint ends up being bigger than that of either the E1 or even the CR1. The stands just don’t complement the style of the monitor.

The primary question is just how much of the CR1’s performance and musicality has made the transition to the CE1? Short answer: quite a bit. And to a large extent, my time with the CE1 felt like a reunion with an old and faithful friend. Its overall sonic character is clearly cut from the same finely woven cloth as that of the CR1—a very good thing. In many aspects it remains a powerfully dynamic performer undaunted by limitations of size. Here was the familiar, richly textured, bottom-up sound that provides a rigid foundation beneath every musical selection. Here was the same natural bloom throughout the lower mids and bass that not only serves the instruments that play in this zone but also fleshes out acoustic and ambient cues and venue boundaries, and adds likelike scale to the soundstage. When I listen to Nils Lofgren Acoustic Live, in and of itself a very lively and dynamic performance, I expect to get a strong sense of the air and ambience of the acoustic space. And the CE1 delivered it. This is a key strength of this TAD.

The CE1 has a marginally warmer and more forgiving sound than the ultra-detailed CR1. And though it’s slightly less precise at the frequency extremes, it may, in fact, be more musically involving and approachable for listeners who are not as keen to experience the “no-place-to-hide” level of clarity and transient speed of the CR1. (It’s also less persnickety about amplification and cabling.) For example, its rendering of the wide-ranging tonal colors and contrasts of solo piano was superb. The beryllium-dome tweeter was righteously extended and had a sweetness in the top end that opened up a gusty piano arpeggio rather than squeezing it down and drying it out. Low-level resolution, the ability to communicate the softest cues amongst the boldest outbursts, was also outstanding. Each keyboard image was backed up by the resonance of the soundboard, plus the CE1 laid a foundation of granite beneath the instrument.

Bass response and dynamics in the upper and midbass regions were very good with little perceivable compression. In my room the CE1 easily plummeted into the mid-30Hz range with vigor and pitch definition. On the Olympic Fanfare with the National Symphonic Winds from the LP Center Stage [Wilson Audio], the CE1 reproduced a vivid range of tonal color, fearsome dynamic gradients, and considerable low-level detail upon a magisterial soundstage. This is not a track to play on loudspeakers that lay back in the upper bass and lower midrange octaves. The music should sound victorious, which is exactly the experience that the CE1 conveyed. It was equally impressive on a track like Dire Straits’ “Telegraph Road.” Punctuated by Mark Knopfler’s guitar licks, a runaway piano, and an avalanche of drum fills, the song accelerates like a train without brakes and can overwhelm a lot of good loudspeakers with the sheer dynamic range and resolution it requires. But the CE1 was capable of sorting and organizing the multi-tracked mayhem of this engineering achievement.

At its limits the CE1 doesn’t extend quite as deeply or with the same speed, dynamic impact, and control as the CR1. With the CE1 I could perceive the woofer’s limitations when I cued up Copland’s Fanfare for the Common Man. So, in terms of the final few hairs of overall resolution, the CR1 will outpoint the CE1. Where the CR1’s dynamic thrust and bass seem to transcend the limitations of its stand-mount birthright, the CE1 gets you 95 percent of the way there depending on your listening habits and the amount of slam you prefer.

Most importantly the magic of the CST driver has been preserved. Inter-driver coherence is excellent, and the unit’s point-source-like performance can still charge the listening space as if it were a single full-range transducer. The CST is a marvel of imaging exactitude that locks in the coordinates of vocalists and instrumentalists with surgical precision. When I listened to the DSD file of The Carpenter’s “Close To You,” each carefully balanced track (and there are a lot of them) seemed bolted into position along unwavering vertical and horizontal planes.

The CE1 allows listeners to pick up depth and dimensional components that are just this side of holographic. You can also spot elements of electronic artifice and gain acoustic insights about a recording session—the microphone patterns, spotlighting over instrumental sections, the reverb added to vocals, and sometimes even the condition of twenty-year-old shag carpeting. As I listened to violinist Anne-Sophie Mutter playing the Tchaikovsky Violin Concerto I could plainly hear the soloist discretely isolated from the various sections of the symphony orchestra. And again during Norah Jones’ cover of “The Nearness of You,” the vocal and piano images each had a different three-dimensional heft and front-to-back physicality. With the CST there’s always elbowroom around individual players, even in the most complex orchestral crowds. But the CST also conveys a particular style of image reproduction that some may find more persuasive than others. It tends to frame the soundstage and target images within those boundaries so finely that initially your ear needs a moment to adjust to this slightly sharper focus. It’s not unlike reorienting yourself to a ribbon speaker or a planar dipole design if your point of reference is dynamic cone drivers. Each speaks the language of music reproduction but with slightly differing accents.

By any standard the CE1 is pure TAD with all the sonic qualities and performance benchmarks that the brand is known for. But at $26,400 (with ST2 stands) the CE1 also clocks in curiously close to its full-range TAD stablemate, the $29,800 Evolution One, which offers the identical CST plus an additional woofer generating greater overall low-end extension, more effortless bass dynamics and, ironically, a smaller room footprint. So, I’m reminded of the classic line from the musical The King and I: “It’s a puzzlement.” Okay, so E1 or CE1? Obviously if the style and the stand-mount experience are paramount, there’s nothing further to say. And I think you’ve already guessed which direction I’m leaning. In any case, my hat is off to those in a position to make such choices. Either way, you’ll be enjoying one of the great pleasures of the high end.