After this year’s Munich show Jonathan Valin and I made the short trip to Zurich to visit Swiss loudspeaker manufacturer Piega, and listen to its ambitious new $195k Master Line Source loudspeaker. We were greeted at the train platform by a stunning view of Lake Zurich on one side and the snow-covered Alps on the other. It was a picture-postcard scene on a picture-postcard day.

Manuel Greiner, son of Piega’s co-founder, soon appeared. After the introductions he suggested we go straight to the factory. We began walking on the platform, believing that we were headed for the train station’s parking lot and then a car ride to the industrial part of town. After just a few steps Manuel pointed to a building about 50 yards ahead on the beautiful lakefront and said “That’s the factory.”

Europeans sure know how to live. 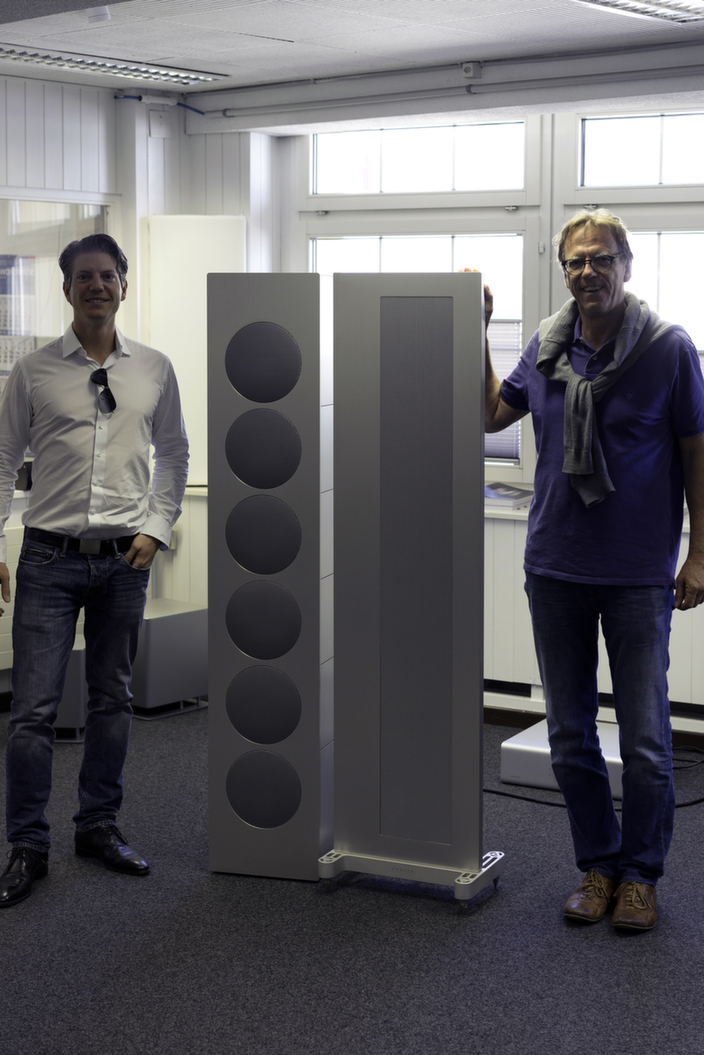 Although Piega has a low profile in the U.S. (it has never found a good distributor), the company is extremely successful elsewhere around the world. Last year Piega passed a milestone that few loudspeaker manufacturers achieve—100,000 pairs of loudspeakers sold. This is all the more remarkable when you consider that Piega loudspeakers aren’t mass-produced in China; they are super-premium, labor-intensive, high-end loudspeakers built in Switzerland to the standards you’d expect of Swiss hand-craftsmanship.

Dick Olsher reviewed Piega’s $9000 TC-10X stand-mount two-way in Issue 176 and concluded “Detailed, yet relaxed, the Piega caresses musical lines with speed, finesse, and no artificial aftertaste. A proprietary coaxial ribbon is responsible for pure textures through the critical mids and upper octaves. Forget British mini-monitors, the Piega is the champ when it comes to imaging precision and stability.” 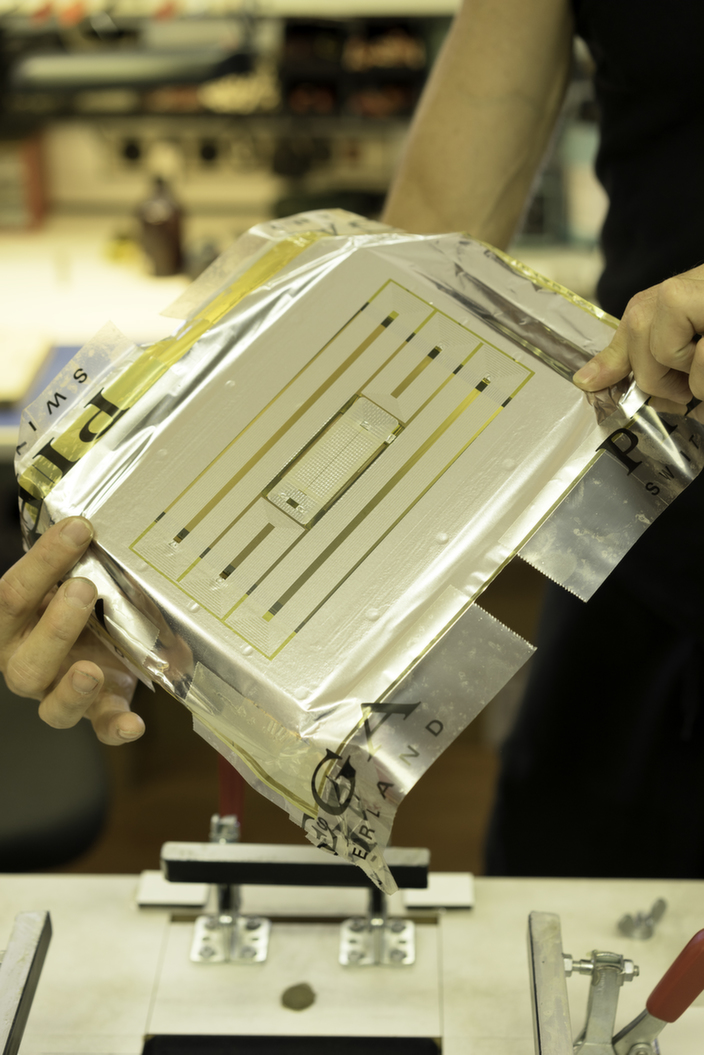 Piega was founded in 1986 by Leo Griener and Kurt Scheuch. The two continue to run the company today; Leo operates the business and Kurt perfects the designs. Piega is noted for two core technologies: extruded aluminum enclosures and in-house-made ribbon drivers. The company’s use of aluminum as an enclosure material presaged the modern trend; its first aluminum speaker was introduced in 1989. Piega’s second foundational technology is the ribbon driver, employed since it introduced its first product 28 years ago. In fact, the name “Piega” means “fold” in Italian, a reference to the original ribbon’s pleated diaphragm. Over those 28 years Piega has refined and perfected the ribbon driver, as well as the painstaking methods and elaborate tooling to build them in its factory by the lake. To my knowledge, no other company even comes close to Piega’s experience with ribbon transducers. 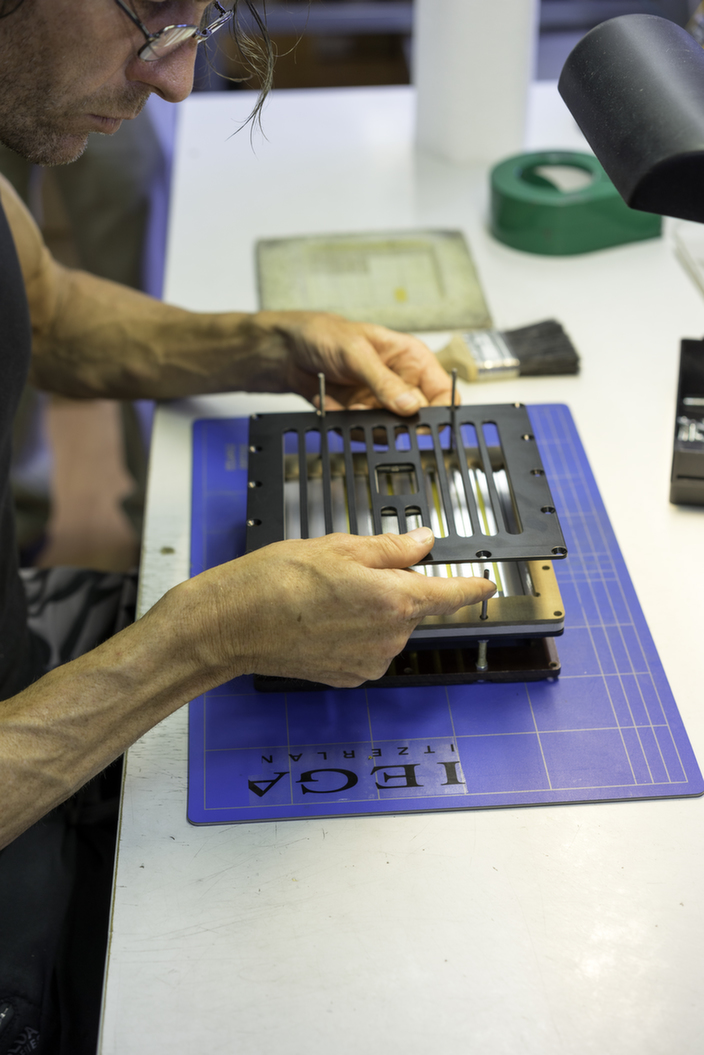 Seeing first-hand how the ribbon drivers are made was astounding. These are extremely sophisticated drive units, built one at a time by skilled hands with meticulous attention to detail. Piega builds in-house a ribbon tweeter, a ribbon midrange, and a unique coaxial driver in which a ribbon tweeter is mounted within a ribbon midrange. All the drivers are made one at a time by four ribbon-builders, two of whom have a combined 35 years of experience at Piega. The lead builder’s father, Piega’s first employee, also assembled ribbons.

We were shown, in elaborate detail, the entire process for creating a ribbon driver from scratch. Piega co-founder Kurt Scheuch not only designed the drivers, but developed the jigs, methods, and procedures for building them. The tensioning of the diaphragm, the glues, the neoprene decoupling material, and countless other factors that affect the sound have been optimized over the past 28 years. Each coaxial driver takes eight hours of skilled hand labor to build. When I joked about how much easier it would be to buy off-the-shelf cone midranges and dome tweeters, Scheuch extolled the ribbon’s virtues with a missionary zeal. One of these is extremely low mass—the Piega tweeter diaphragm weighs 0.007 grams, 35 times less than a dome diaphragm, but has a vastly greater surface area. Moreover, according to Scheuch, ribbons can be made to have transient performance that is unequalled by cones and domes. Piega’s coaxial ribbon achieves perfect coincidence between the midrange and the tweeter in the X, Y, and Z (depth) axis. 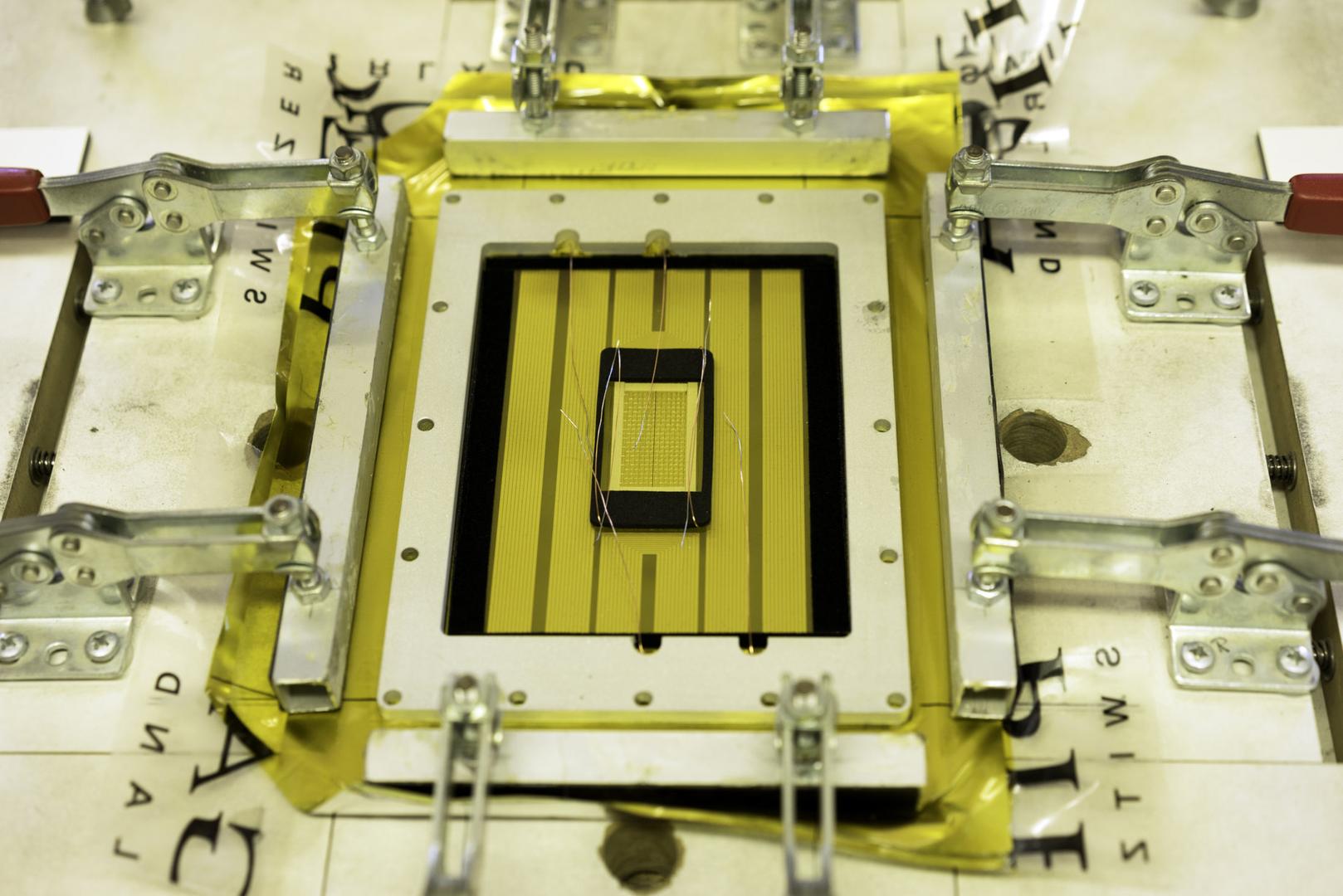 Piega’s entry-level offering is called the TMicro Series at 290 Swiss Francs (about $320 U.S.) , and employs a dome tweeter. The ribbon-based line starts with a two-way stand mount (called the Premium 1.2) at 990 Swiss Francs (about $1100 U.S.). The Coax Line with the coaxial ribbon driver begins with the Coax 10.2 at 8000 Swiss Francs (about $8800 U.S.). The Master Line encompasses the Master One and the new Master Line Source, a $195,000 statement-level four-piece system. The Master Line Source is the ultimate realization of Piega’s ribbon technology. The midrange/tweeter panel houses nine ribbons in a dipolar line array. These dipolar midrange drivers are flanked by 24 tweeters, 12 on each baffle side to match the midrange drivers’ dipole radiation pattern. The accompanying woofer tower, in a separate enclosure, holds six 9″ bass drivers. The enclosures are all aluminum, with a total system weight of more than 900 pounds. 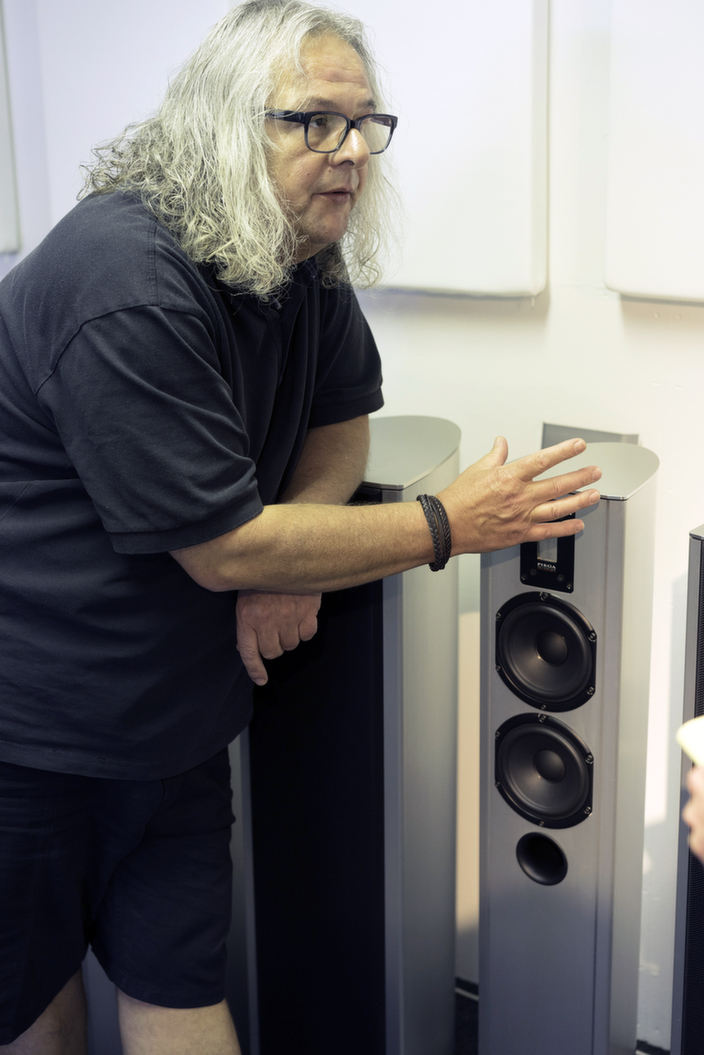 When you’re listening to the Master Line Source driven by Solution 501 amplifiers the benefits of Piega’s ribbon technology, the line-array architecture, and the use of so many drivers are readily apparent. With so much diaphragm area, the excursion of each driver is miniscule. This allows the drivers to operate with total linearity. The sound was ultra-liquid and smooth, with gorgeous tone color. Even the best dome tweeters add a tincture of brightness that was totally absent in the Master Line Source. The top end had wonderful delicacy that suggested you could listen to this loudspeaker for hours without listening fatigue. The spatial presentation combined precise image focus with an expansive sense of width and depth. Transient response was superb, as you’d expect from ultra-low-mass ribbons. We came away from our visit with a great appreciation for Piega’s innovative technology, Swiss craftsmanship, sound quality, and nearly three decades of worldwide success. The company is truly an original, and deserves a higher profile in the U.S. market.