When you take a show from a hotel that’s been hosting that show for many years and move it to another hotel, it is, for all intents and purposes, a brand-new show. That’s exactly what happened to Rocky Mountain Audio Fest in 2019. Gone was the underachieving and dowdy old Marriott, replaced by the upwardly-mobile and near-to-the-airport Gaylord Rockies Resort and Convention Center. The new venue was shinier, and big enough to swallow up the whole show with room to spare without even a belch. I walked 8.6 miles in four days. The elevators and the Internet were lightning-fast and the food options, while pricey, were mighty fine. And the showrooms were, overall, far better sounding than at any show I’ve attended in recent memory. What follows is what I discovered in the way of exciting new digital components and streaming devices.

Premiers
Leading off my list of top new digital product introductions is the Bryston BDA-3.14 “Multifunction” DAC. It includes not only a fully-featured DAC but also a complete streaming platform that supports Qobuz, Tidal, Roon, and other services. With a digital volume control and Bryston’s Magic Moose smartphone app, you can control all functions from your listening seat. 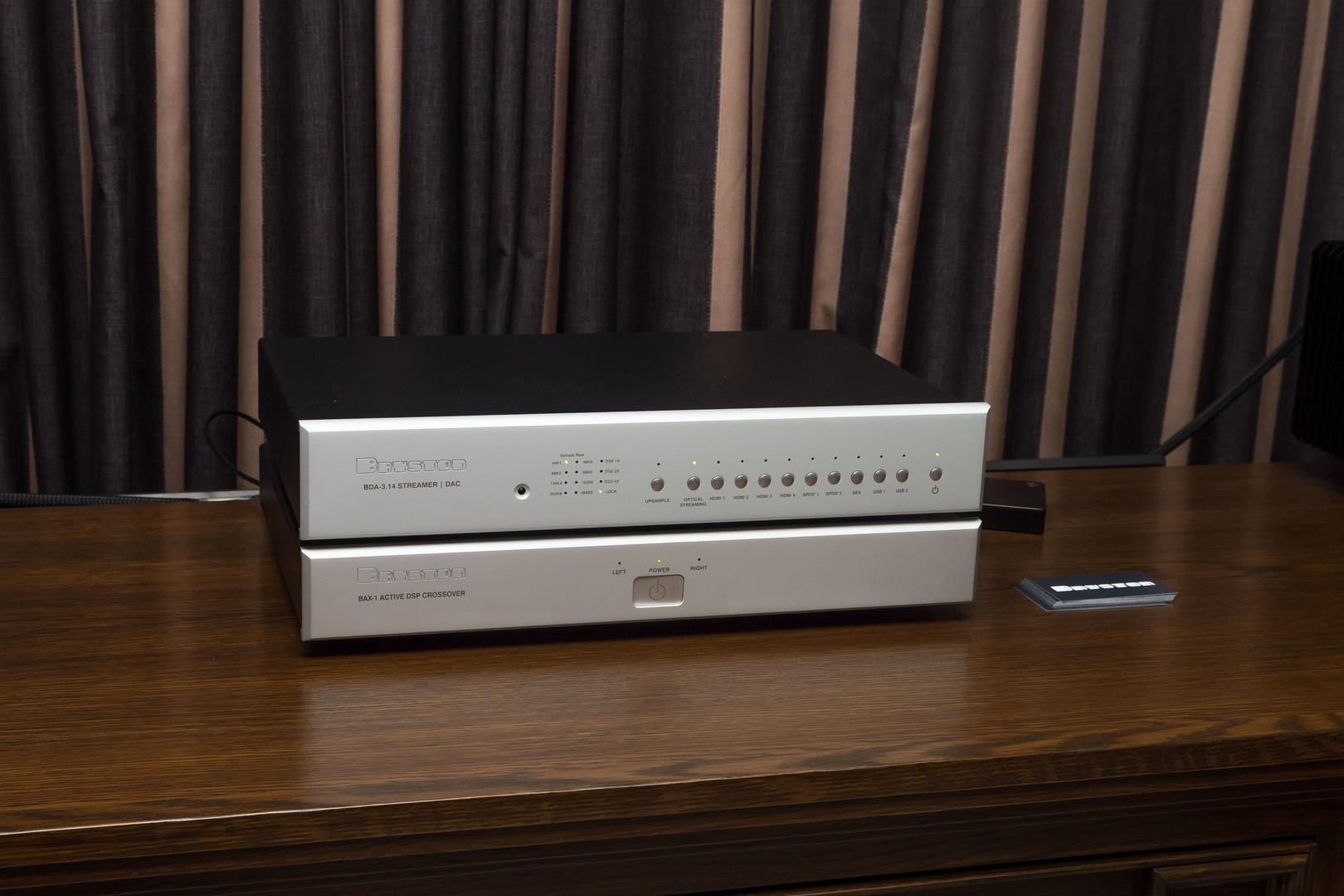 Internally the BDA-3.14 uses an I2S protocol to preserve audio and clock data with what Bryston claims is “virtually no error.” The BDA-3.14 also reclocks all digital sources and can decode up to 384/32 PCM and DSD 64 natively. On the analog side the BDA-3.14 eschews integrated circuits for discrete ones and includes ten input options including four 2-channel HDMI, asynchronous USB, AES/EBU, TosLink, and digital coax. The BDA-3.14 also includes Bryston’s network module, which facilitates control via TCP/IP and RS-232. The BDA-3.14 was impressive as part of a system using the Bryston BAX-1 digital crossover ($3495) two 21B3 ($10,995 each) amplifiers and Model T Active loudspeakers ($9995/pr.). The BDA-3.14 will be available from Bryston dealers beginning Q4, 2019 and carry an MSRP of $4195.

Pro-Ject unveiled not one but two new digital devices. The first one is Pro-Ject’s CD Box RS2 T. This top-loading CD drive will play CDs, CDRs, CD-RW, and the Red Book layer of a hybrid SACD. This is a dedicated CD player, not a universal player. It has been optimized for CD playback with a “Blue Tiger” CD-Pro 8 top-loading module. Outputs include a balanced AES/EBU, SPDIF via coaxial and TosLink, an I2S + Master clock connection, and an HDMI output. Available in black or silver with a matching aluminum remote control, the CD RS2 T will have a projected MSRP of $2995.

Pro-Ject’s second new offering was the Pre Box RS2 Digital. This preamp, DAC, and headphone amp is the same size as the CD Box RS T and employs a dual mono configuration using ESS9038Q2M DAC chips. With MQA support in addition to selectable PCM filters, the Pre Box RS2 has nine digital inputs including I2S via HDMI, USB, AES/EBU, TosLink, SPDIF, coaxial, and Bluetooth v4.0 with aptX. The Pre Box RS2 also has an analog input as well as a pair of balanced and single-ended analog outputs. If you can’t decide between a solid-state or a tube buffer, fear not, since the Pre Box RS2 offers both a discrete and balanced solid-state or 6922EH tube output. The headphone output section can deliver 90mW into 300 ohms. MSRP in the US will be $2495. 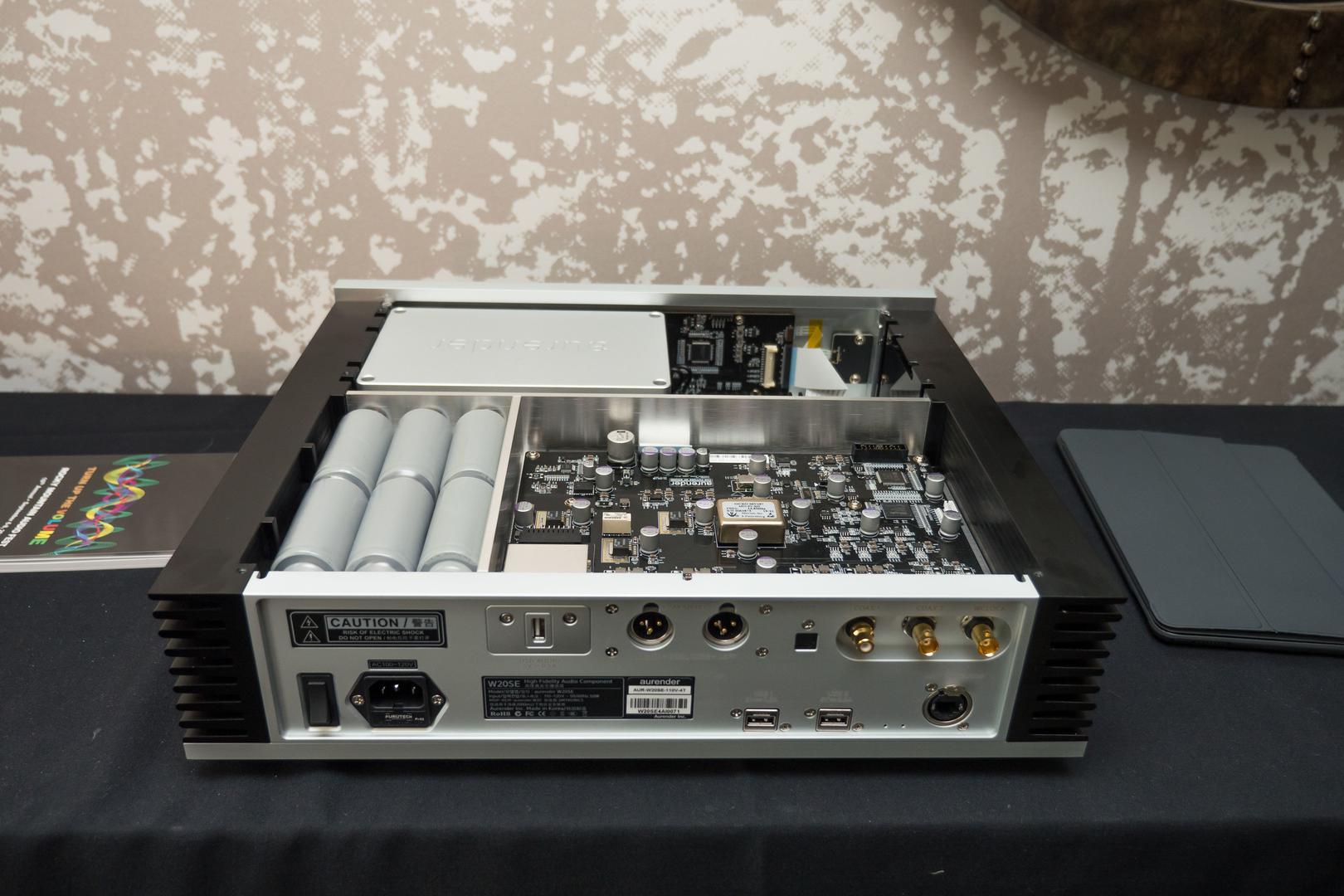 I saw plenty of Aurender gear throughout the show, but the company’s new product introduction was its flagship model, the W20SE, which has been revised and refined. Improvements include a linear power supply replacing the SMPS, upgraded OCXO clock and VCXO clock, increased system storage, replacing the 3.5” HD drive with an SSD drive, increasing DSD native capabilities to DSD 512 via USB, optional PCM upsampling to 384kHz, and instead of an extra option, MQA decoding now comes standard. Available immediately, the MSRP is $22,000. 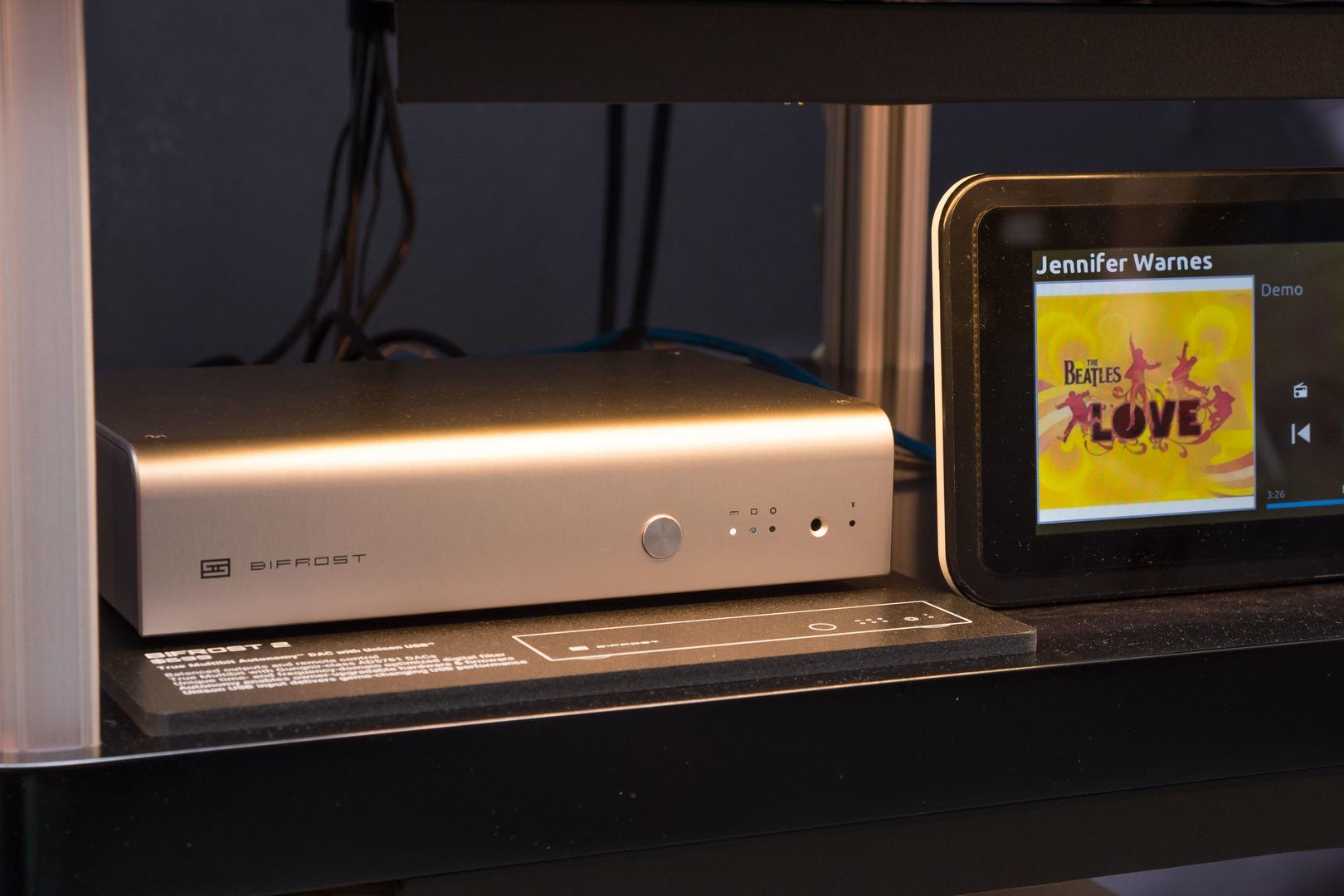 Schiit Audio had a new mid-level DAC, the Bifrost 2, which of course, replaces the Bifrost 1. The Bifrost 2 employs a true multibit DAC design that uses Gungnir-class AD5781 D/A converters. It also includes a pair of balanced analog outputs to join a pair of single-ended ones and adds remote control. The Bifrost 2 is also the first Schiit DAC to employ the maker’s new proprietary Unison USB input, and Autonomy platform for hardware and firmware upgrades in the field. The Unison USB is Schiit’s own design, not based on C-Media or XMOS chip. Bifrost 2 comes with a 5-year warranty and is priced at $699. Current Bifrost owners and upgraders who want to purchase Bifrost 2 can get it for $599. 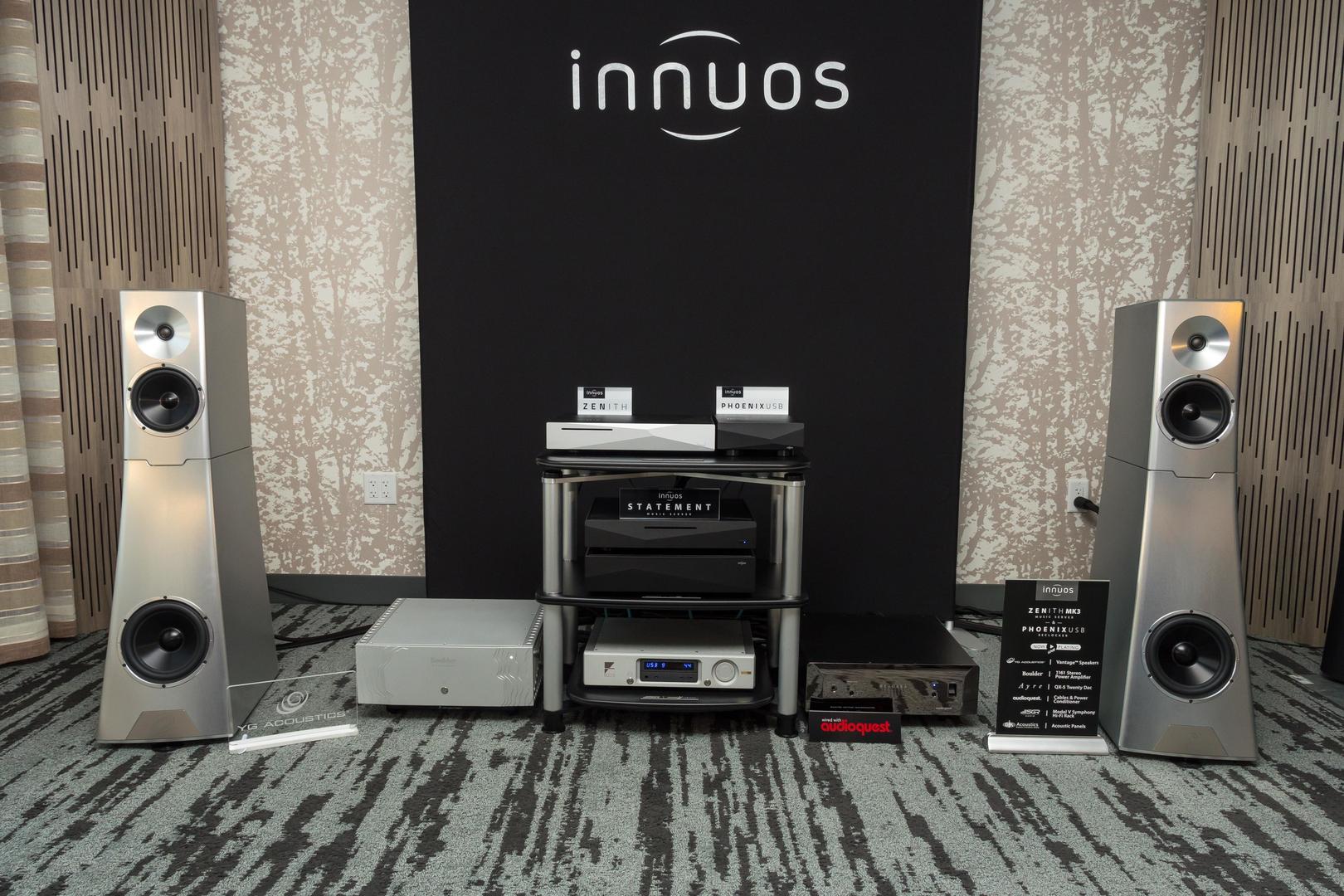 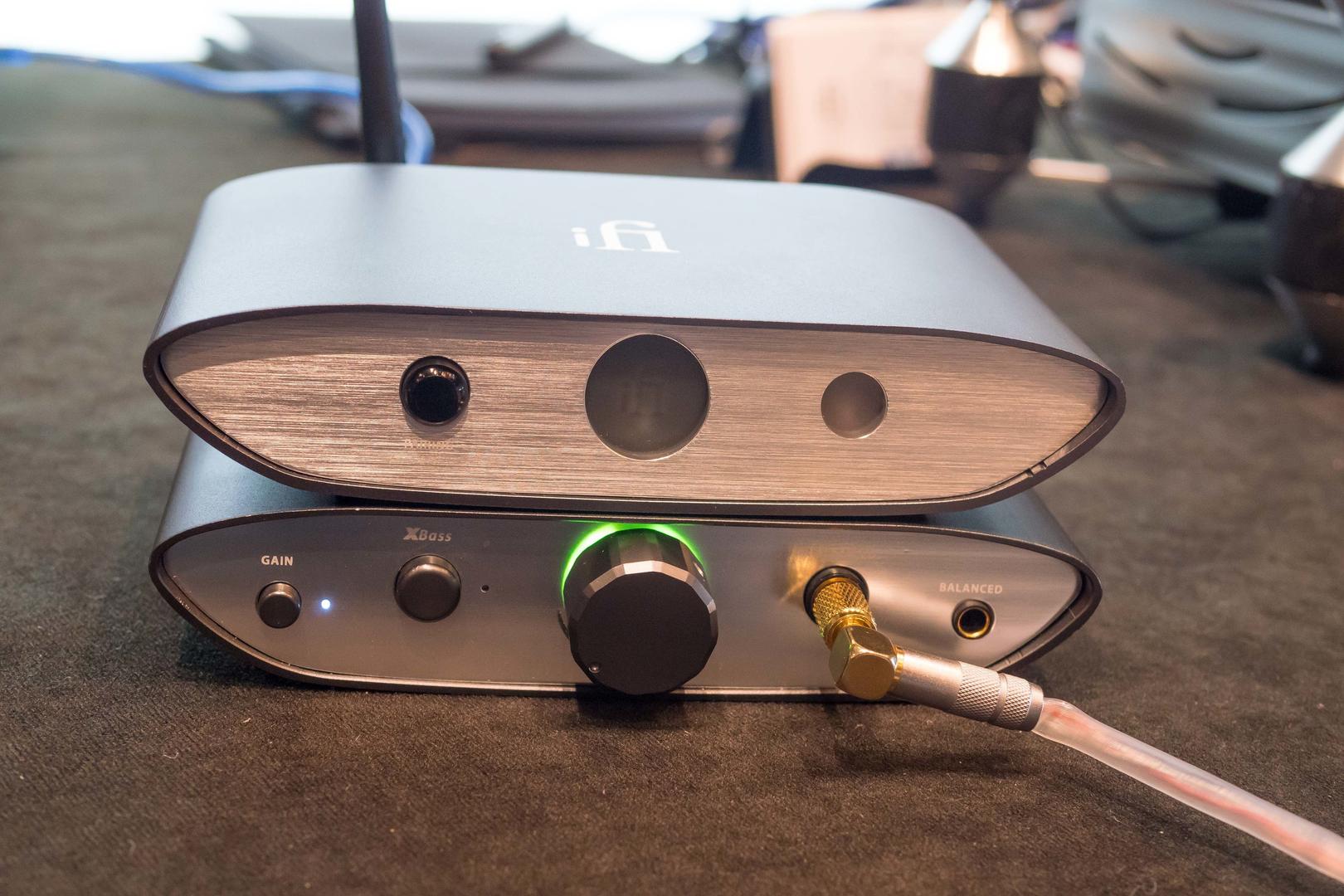 I usually don’t get too excited about passive displays, but the new iFi Zen components had me after “Hello.” They look cool. And then after I read their specs and pricing ($139-$159 each) I went to that special place reserved for gobsmacked audiophiles. Available in September, The Zen Blue hi-res Bluetooth streamer supports Qualcomm’s aptX HD, Sony’s LDAC and Huawei’s HWA, so it is a true high-resolution device (LDAC does 96kHz/24-bit). With SPDIF and TosLink digital and both balanced and single-ended analog outputs, this little device could end up in some otherwise pricey systems and no one’s ears would be the wiser. The companion Zen component, the ZEN DAC, will have a USB input and similar output options and internal capabilities.

In the Headspace ballroom I happened upon the Geerfab Audio D.Bob digital break-out box ($995 MSRP). Used in conjunction with any universal disc player with an HDMI output, the D.Bob allows you to play back SACDs and Blu-ray soundtracks through most high-performance DACs. Merely connect the D. Bob between your player’s HDMI output and the DAC’s SPDIF or TosLink input and you’re all set to play SACDs through any DAC with SPDIF input connections. 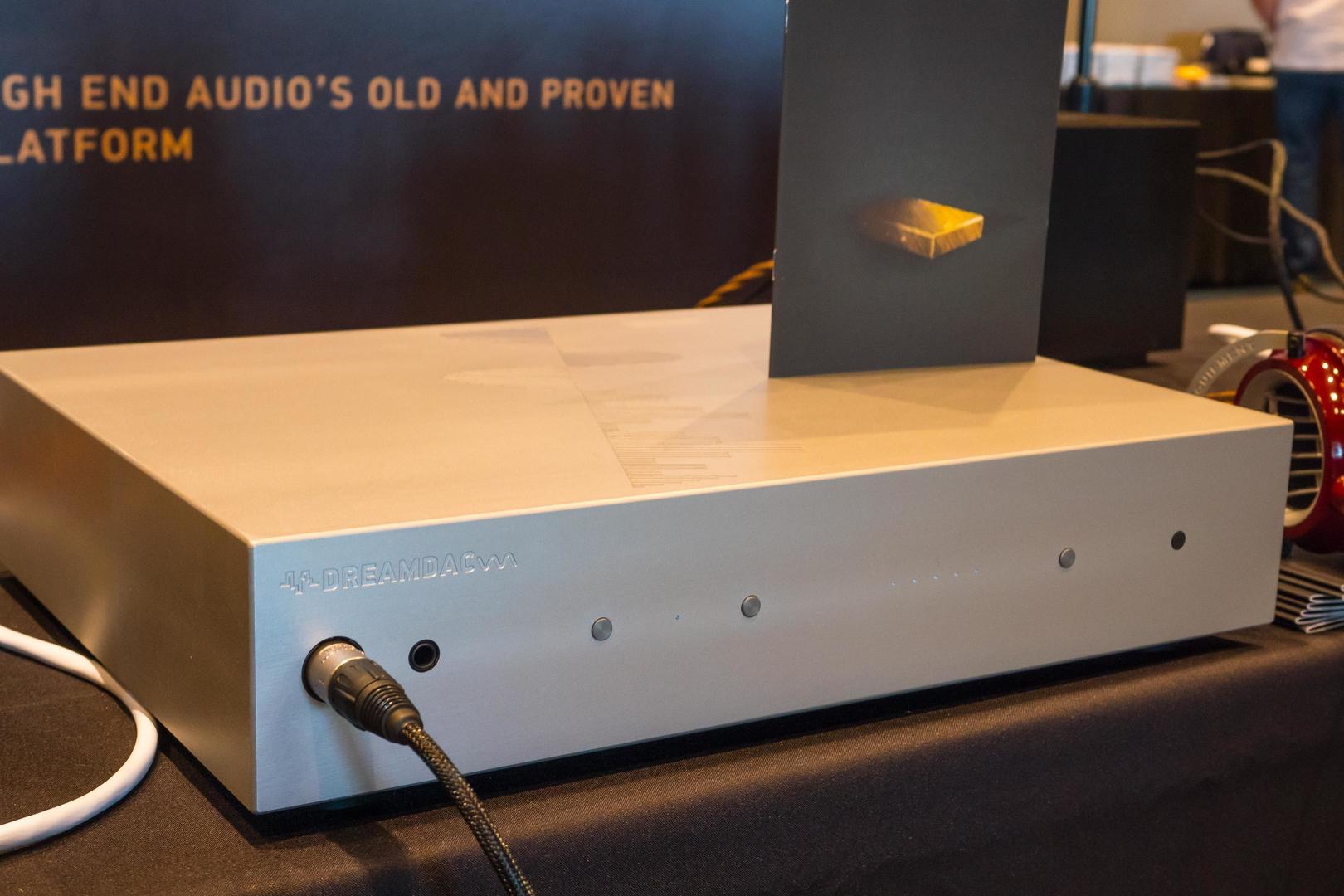 In the middle of the Marketplace ballroom, sharing a table with Stereo Pravda in-ears, was the Etalon Sound Dream DAC (€10,000). Manufactured in Russia, this R2R ladder DAC employs a proprietary synchronous volume control, a proprietary algorithm for low-level signal conversion, external power supply, galvanic decoupling between its own internal digital-to-analog converter sections, and the maker’s own proprietary USB module. With both balanced and unbalanced analog outputs as well as balanced and single-ended headphone outputs, a signal-to-noise figure of 127dB, and options for Zircote Leather, or concrete chassis finish, for some folks the Dream DAC might be just the reality they seek.

Good Sound
Sony’s engineers, when turned loose on a project, come up with remarkable solutions, such as the Walkman, the CD, and DSD. Their Z series of components have all been “statement” pieces that added both features and performance levels unique in both scope and ambition to their respective product categories. Sony’s latest “oh my gosh” component completes the Z series with a near-field loudspeaker designed for a specific placement, the SA-Z1 Signature Series speakers. This is an active loudspeaker that contains all its amplification within each loudspeaker. What does it do that is so different? Let me count the ways… 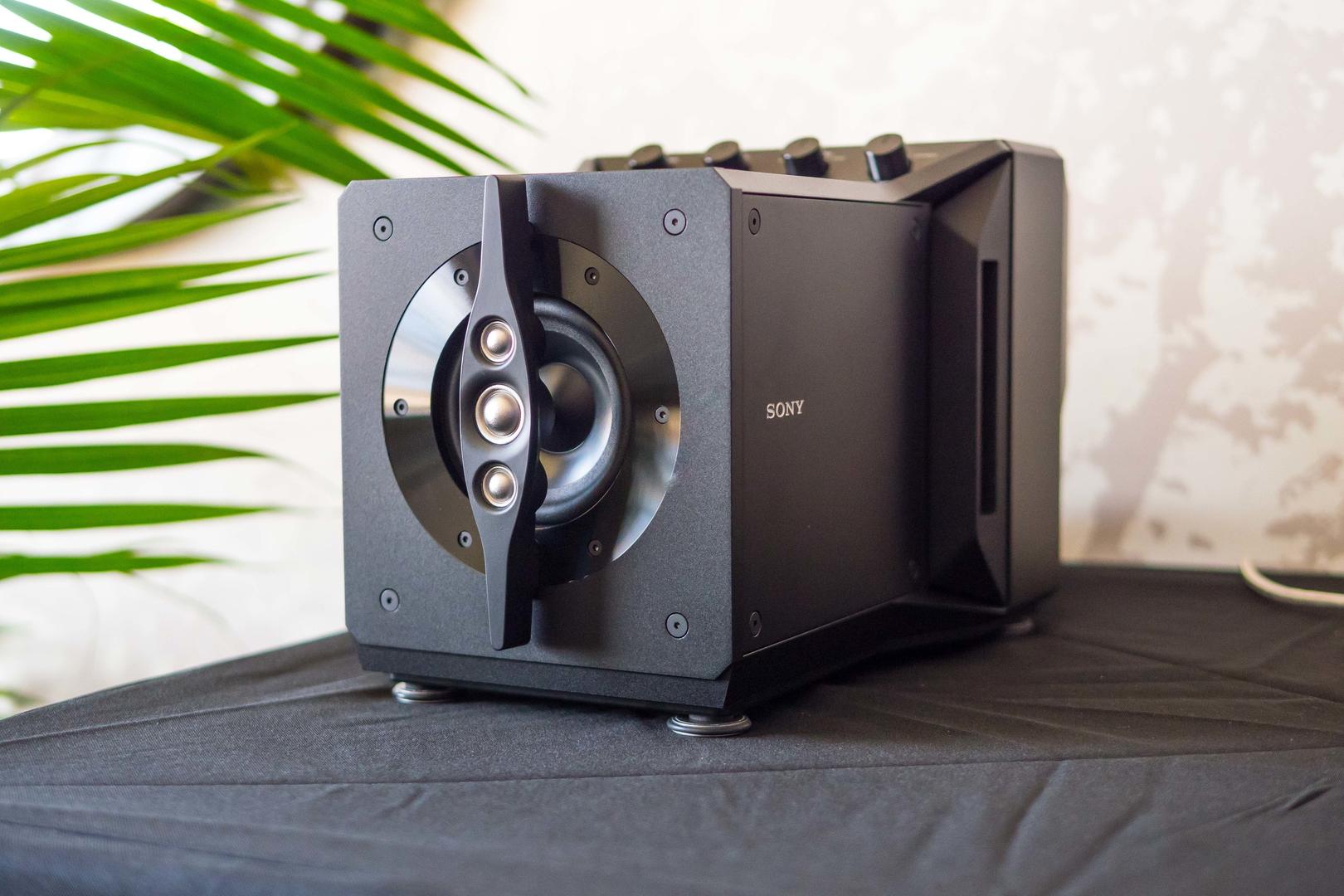 The SA-Z1 has a new three-tweeter array that Sony calls their I-Array. It consists of a primary tweeter flanked above and below by a secondary, high-frequency and lower-output tweeter. This increases not only power handling, but can also reproduce frequencies up to 100kHz, so any bats in the near vicinity can sing along.

The midrange-woofer on the SA-Z1 is also a completely new design. The “Tzuzumi Layout” places two woofers back-to-back, tethered by four metal tubes to each other. To relieve the pressure of the woofer’s inward excursions the SA-Z1 has large vents on either side of its enclosure.

Instead of a conventional power amp or even a Class D digital power amplifier, Sony chose to take high-power field-programmable arrays and use them as power DACs to drive the loudspeaker. This allowed Sony’s engineers to employ advanced signal processing to reduce distortion and optimize the loudspeaker’s performance.

Potential inputs sources include USB-B, Walkman (digital), optical SPDIF, stereo mini analog, balanced XLR analog, and unbalanced RCA analog. The demonstration included a Sony NW-WM1Z portable player, which I reviewed for TAS a couple of months back, and I know is a wonderful source.

For the listening session I was plunked down into a comfy chair that placed my ears about four feet from the loudspeakers and vertically just below the main tweeter array. The loudspeakers themselves were placed about six inches back from the front edges of the butcher-blocked top and black-cloth-covered table. The rear of the speakers were about seven inches away from the wall. The reason I’m spending space describing the setup is that positioning the new Sony speaker system is critical to its optimal performance.

Test material included a Q-Sound track whose lateral field seemed to extend far past the outer confines of the loudspeakers themselves yet had precise pinpoint imaging within its soundstage. No matter what was played the SA-Z1 loudspeaker system displayed the kind of enveloping yet precise soundstage characteristics that I associate with a first-class near-field monitoring system. Dynamics and bass extension were also surprisingly good…no, they were better than good. I hope, at some time in the future to see how well the SA-Z1 will perform on my own desktop.

Most Significant Product Introduction
The Schiit Audio Sol turntable. Its elegant tonearm design and minimalist profile make it look like a potential top choice in the under-$700 turntables category.

Most Important Trend
Interconnectivity—more manufacturers are making components that combine multiple functions for ease of use, but with maximum performance. 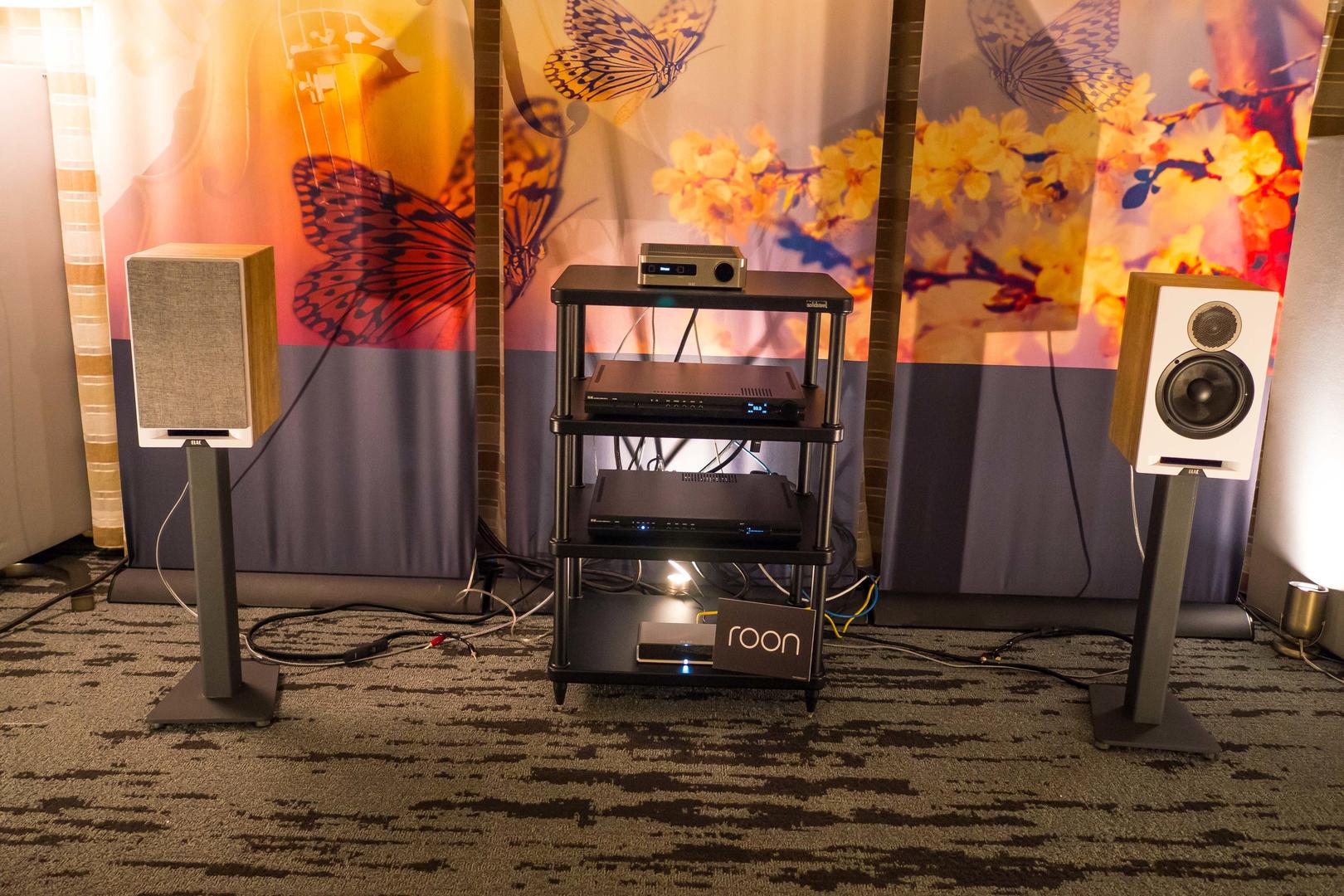 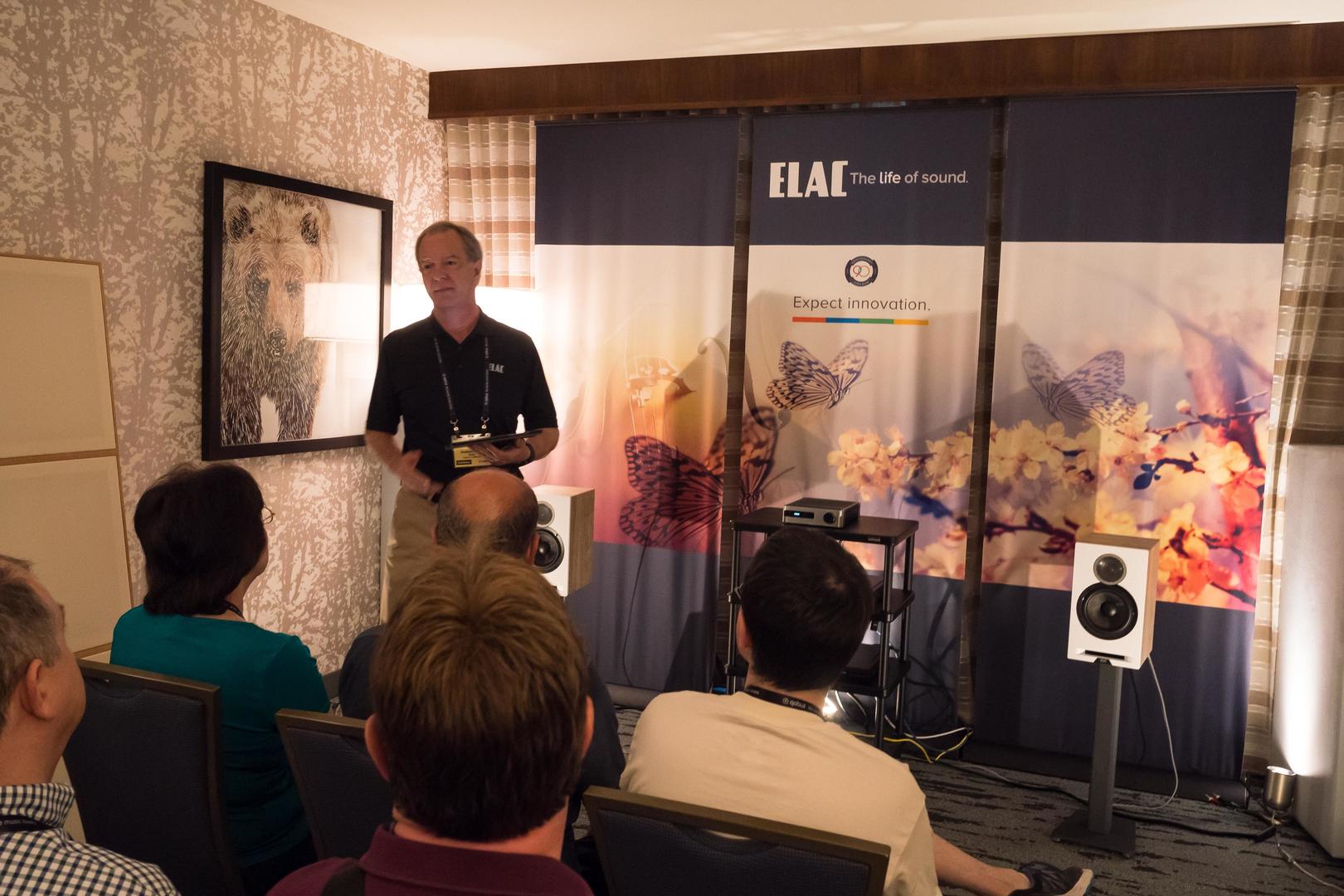