Friday morning of the show, Oliver Masciarotte and I ran the first seminar of the day entitled “What’s Buggin’ You? Questions and Answers about High-Resolution Audio.” I joked with Oliver that we would be lucky to get a minyon (which constitutes 10 individuals), but much to my surprise the hall was over 2/3 full! What question vexed the audience the most? How to tell the provenance of a recording as to whether it was really high-resolution or merely an upsampled Red Book CD standard.

Anyone who’s been reading up on MQA knows that one of its prospective features is the complete provenance of an MQA-encoded track—MQA can deliver a “certified” track that if altered will be immediately detected by the system. That’s exciting. And AXPONA was the first time that many show-goers actually had an opportunity to hear MQA either via Mytek’s Brooklyn DAC, or Onkyo’s and Pioneer’s portable players, or BlueSound’s MQA-enabled streaming devices. That, too, was exciting.

But compared to previous years, I noticed far fewer new introductions of DACs and related digital products. I wondered why, until I asked myself (and others) two important questions: 1) Would you, as a manufacturer, bring out a premium DAC that was not MQA compatible? 2) Would you, as a consumer, buy a high-performance DAC that lacked potential MQA capabilities? The answers I heard were unanimously no!

And as with all disruptive new technologies, there will be some winners (such as Mytek, Onkyo, Pioneer, and Bluesound) and some losers, who will suffer from lost sales during the transition period. For many old-timers it felt like déja-vu—such as when AC-3 digital surround replaced analog matrix surround, sales of analog surround products dropped off a cliff. Will this also happen to all non-MQA-compatible DACs? We shall see.

In case you didn’t get it by now, MQA was certainly the most significant new development I saw at AXPONA this year.

Bricasti Design had several high-performance DACs on display including a limited-edition “true gold finish” M1 DAC, along with its new M12 Dual Mono Source Controller ($15,995), which adds analog inputs to its digital platform and has a DLNA network interface so it can serve as a streamer or server. 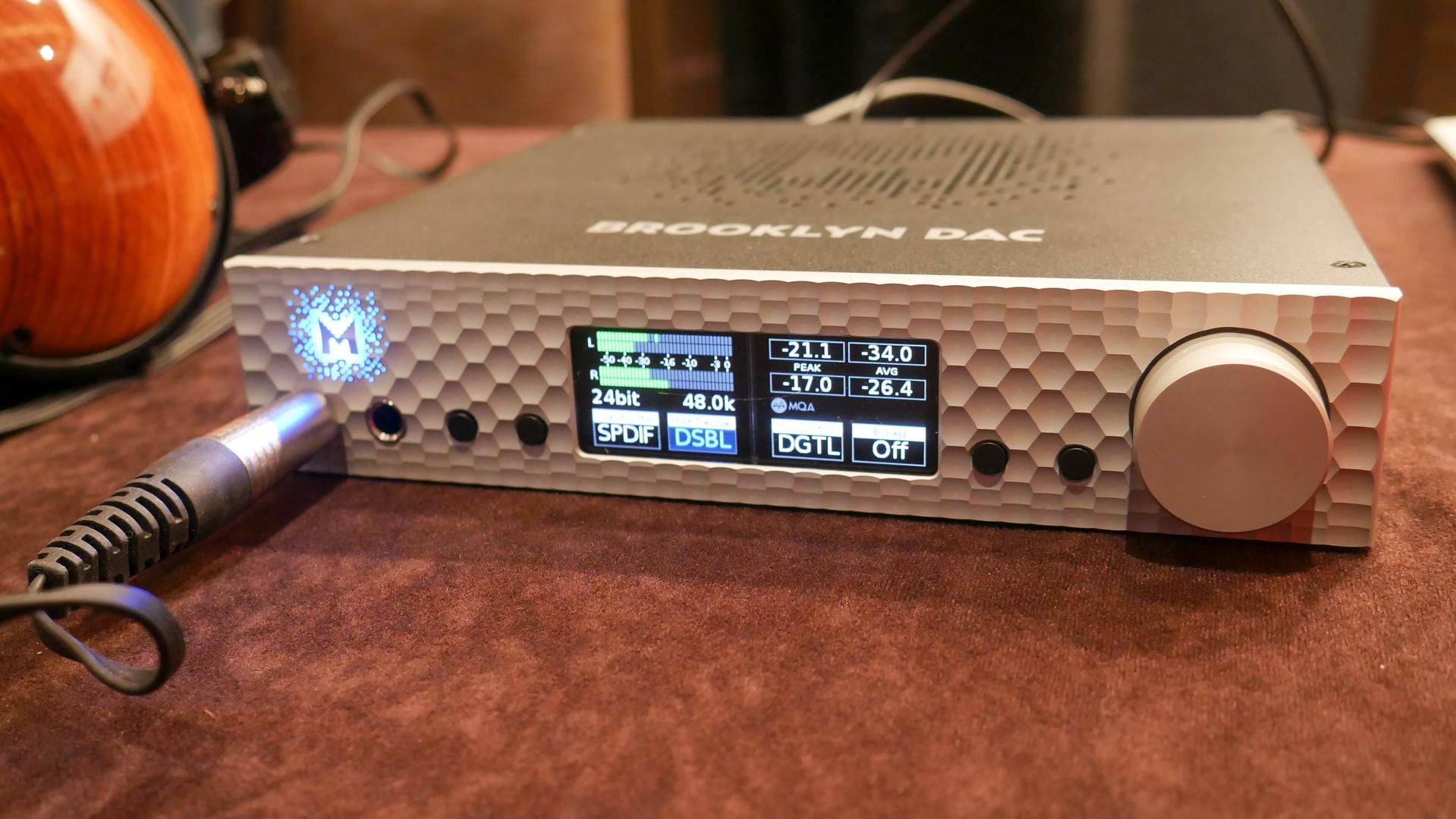 The Mytek Brooklyn DAC with MQA ($1995) was another noteworthy new product. I first saw the Brooklyn at the 2015 RMAF; at that time its release seemed imminent, but the implementation of MQA had delayed the component’s release until now. Within the next couple of weeks all of the preordered Brooklyns will begin to arrive at their new homes. I have spot on my shelf all prepared. 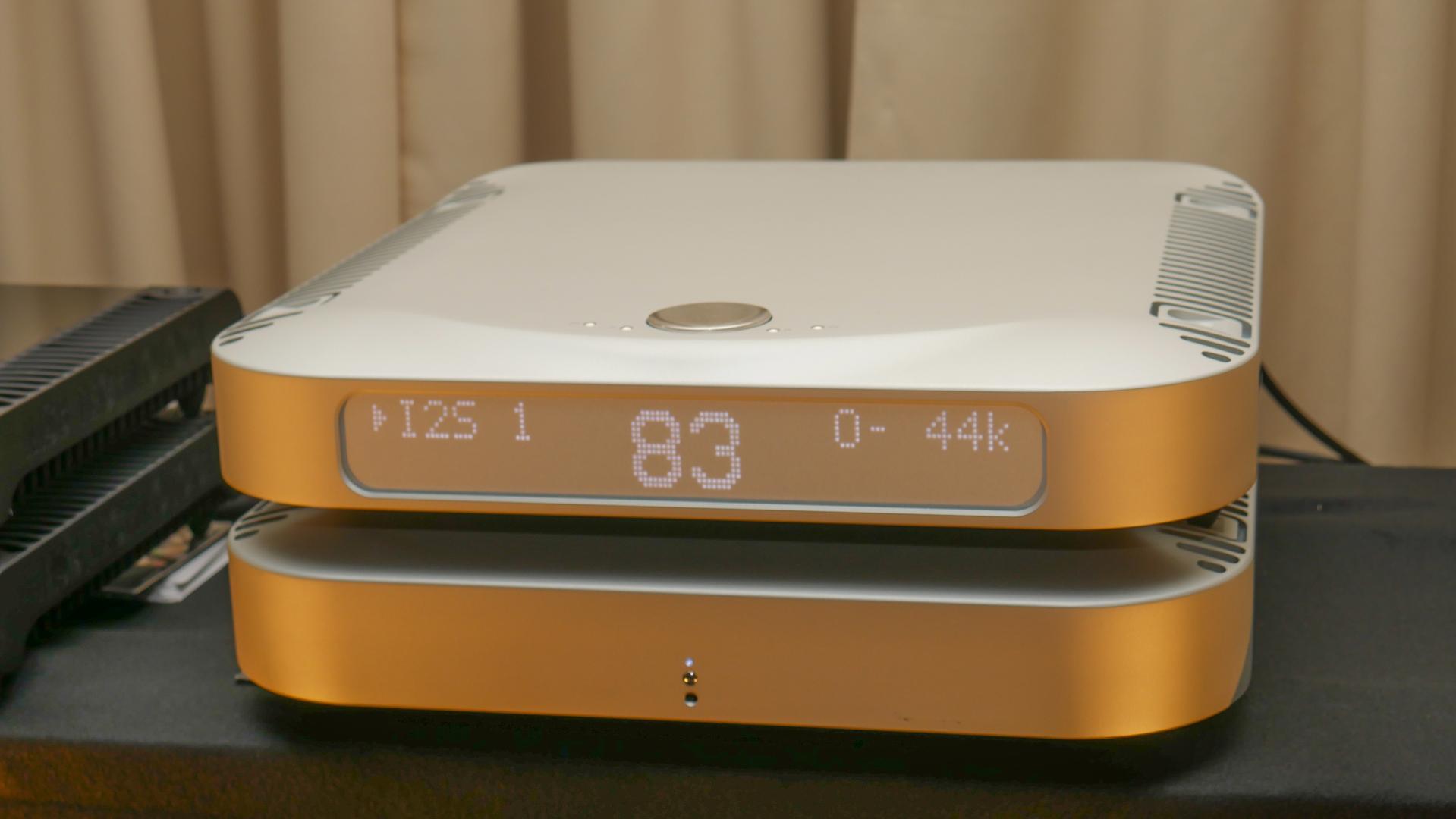 The new MSB Select DAC ($89,950) features a newly invented ladder DAC topology and volume attenuator. With eight DAC modules per channel and the optional Femto clock installed, the Select DAC plays 44.1/16 files without upsampling, but its extreme precision made many of the tracks I heard sound more like high-res than Red Book. I’d also never heard the YG Acoustics Sonja 1.2 ($72,800) sound more natural and incisive as it did with this source. 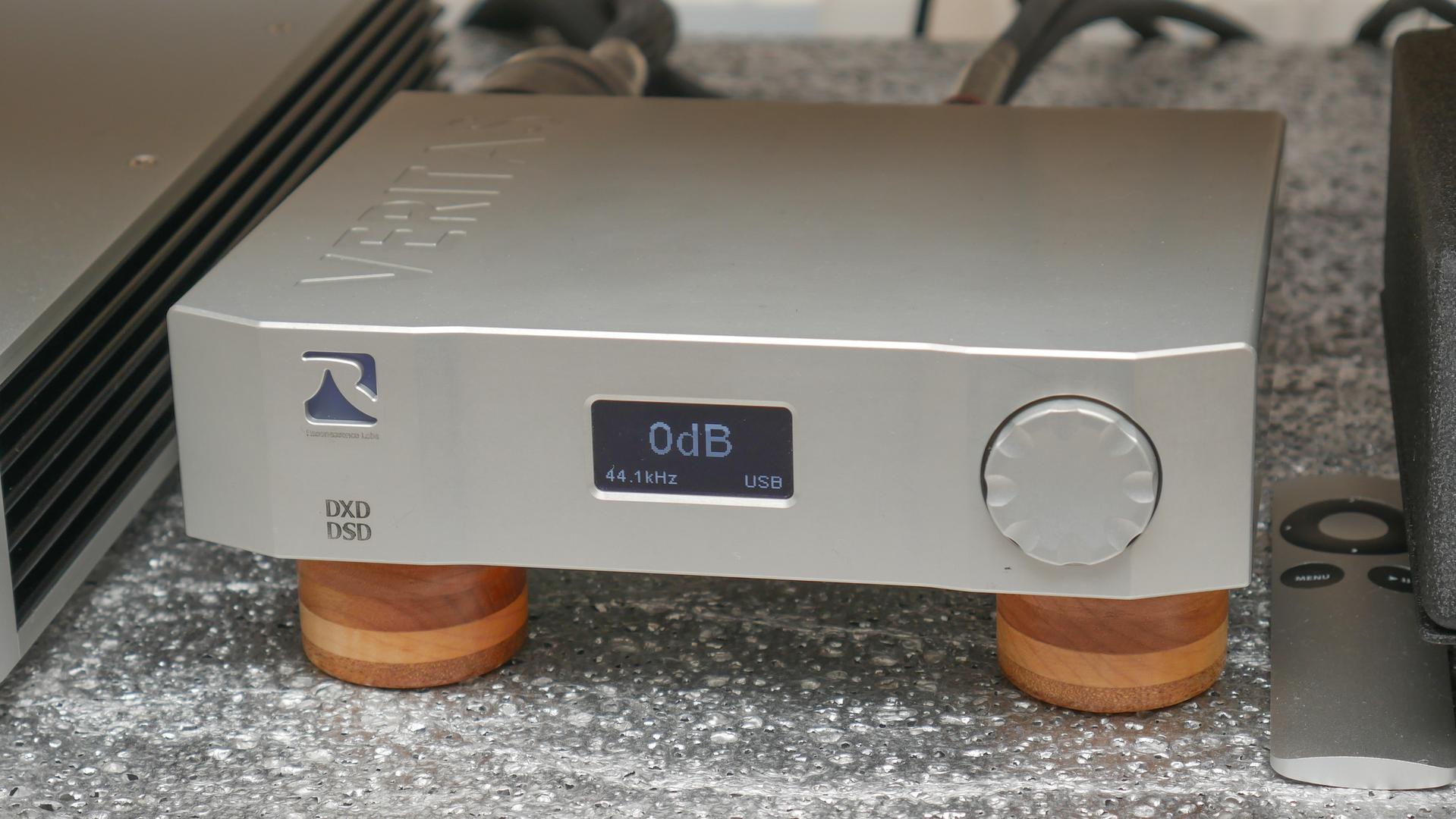 Resonessence Labs unveiled their new Veritas DAC ($2850) which uses the ES9028PRO DAC chip that delivers more than 120dB SNR and less than 0.001% THD. According to Resonessence Labs, 19 out of 20 audiophiles in double-blind tests picked an ESS DAC over all others. (I wonder what was wrong with that 20th audiophile.) 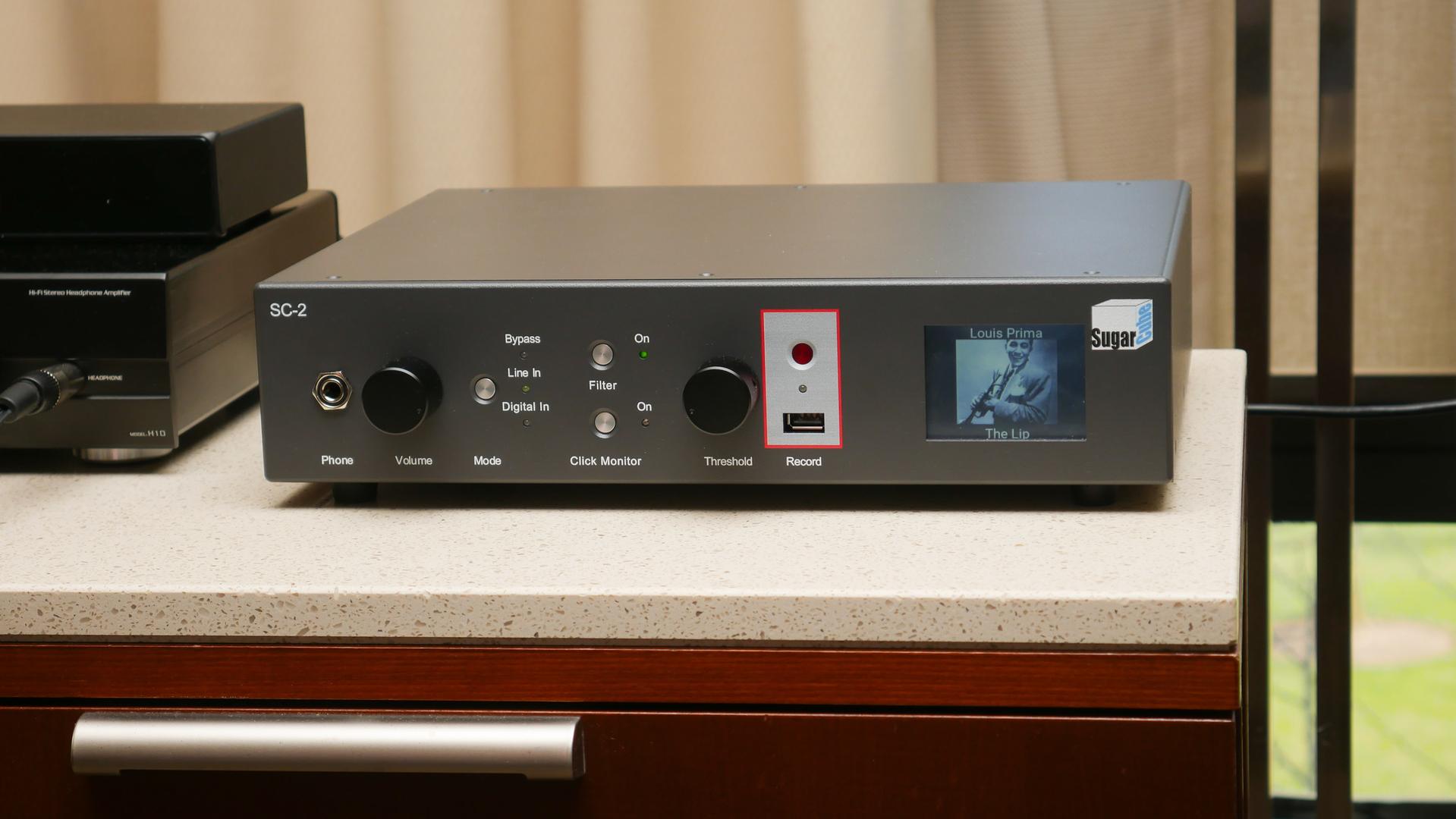 Sweet Vinyl is a new company with one product: the SugarCube SC2 ($2000), which is an analog-to-digital convertor with a built-in impulse noise filter for reducing pops and clicks that is fully adjustable via an app, so you can dial in exactly the right amount of filtering. It also has an LCD display and a database that can fill in many metadata details that usually have to be keyed-in by hand. Also, you can record directly onto a USB stick connection on the front panel. 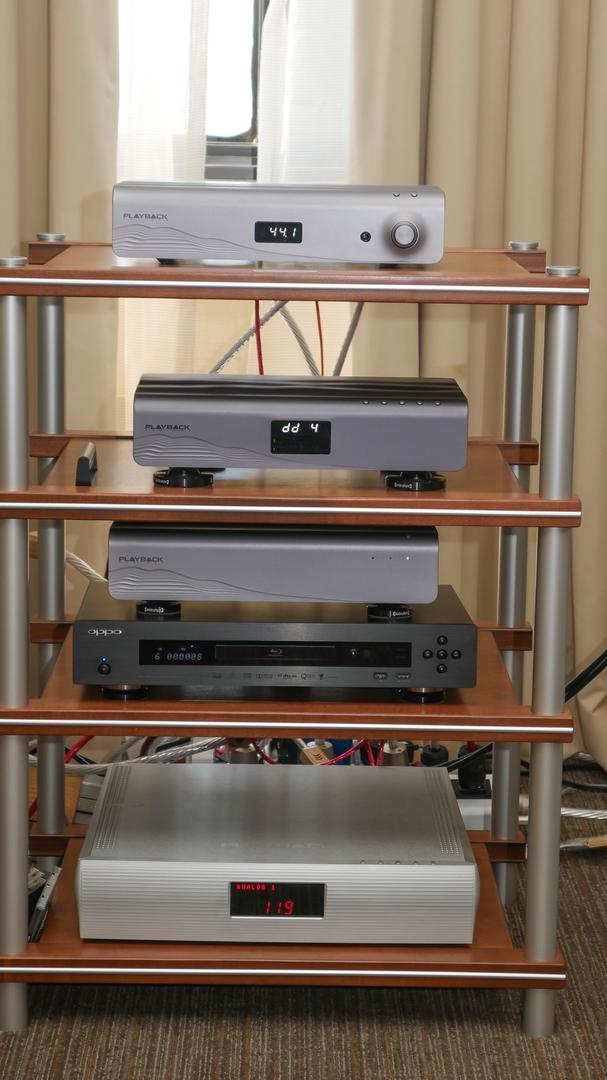 Playback Designs presented its Merlot DAC and Syrah music server, which the company has shown before, but this time they were coupled to the new Pinot ADC ($7500) that can convert analog sources into Quad DSD or 384/32 PCM. The Nola Studio Grand loudspeakers ($19,800), which were tethered to all this Playback Design gear, sounded remarkably lifelike.

The Auranas SRV ($4000 base price) can hold up to two terabytes of music storage with solid-state discs and offers enterprise-grade music file protection. It can play DSD up to 256X and PCM 384/24. With 8 GB of memory and an Intel i3-4130T fourth-generation Haswell processor, the Auranas possesses plenty of computing power. 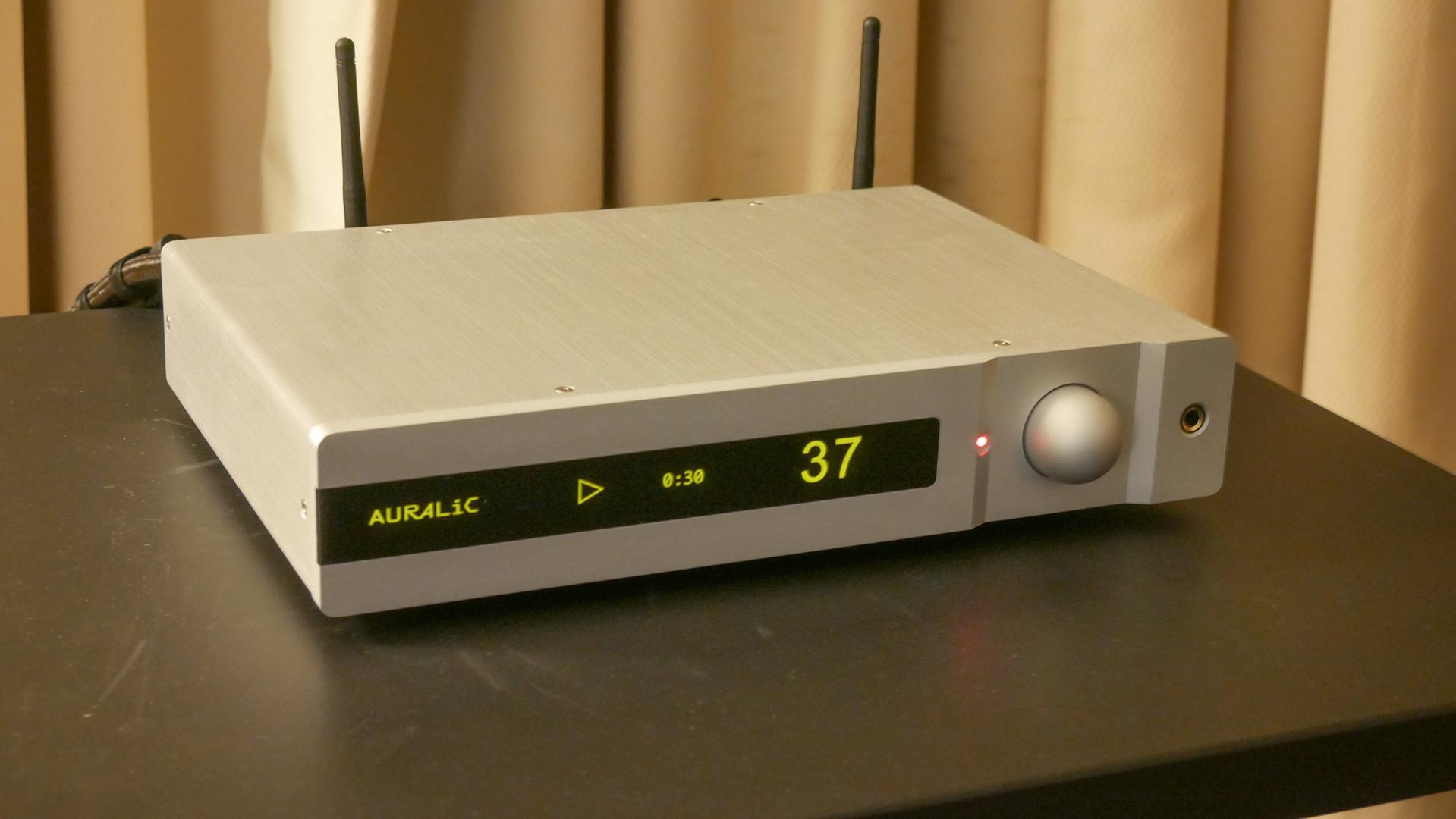 The Auralic Altair wireless streaming DAC ($1899) has fifteen different input options and can play music up to Quad-rate (256X) DSD or PCM up to 384/32. Potential inputs include Bluetooth, Airplay, USB, TIDAL, Internet radio, and USB drives. With both balanced and single-ended outputs, the Altair packs a lot of flexibility to match Auralic’s well-earned reputation for fine sonics.

The ExaSound PlayPoint network player ($1999) is MQA-ready as well as ROON- and speakers-ready. It is an UPnP renderer that is AirPlay compatible and can handle native DSD256 as well as DXD352.8 and 192/32-bit PCM files. The PlayPoint uses asynchronous bit-perfect streaming and can also support eight separate channels for multichannel listening. According to ExaSound, the PlayPoint requires zero configuration, and upgrades will be delivered remote upgrades.

Teac NT-503 USB DAC network player ($999) is a DLNA-certified model that supports DSD5.6 (256x) and PCM up to 384/32. The NT-503 also has aptX CSR Bluetooth support and access to network services including Pandora, Sirus XM, and Tune-in. As if that weren’t enough, the NT-503 also has a 500mW headphone amplifier that supports something that Teac calls “parallel unbalanced drive,” which sounds like that happens in LA during rush hour. 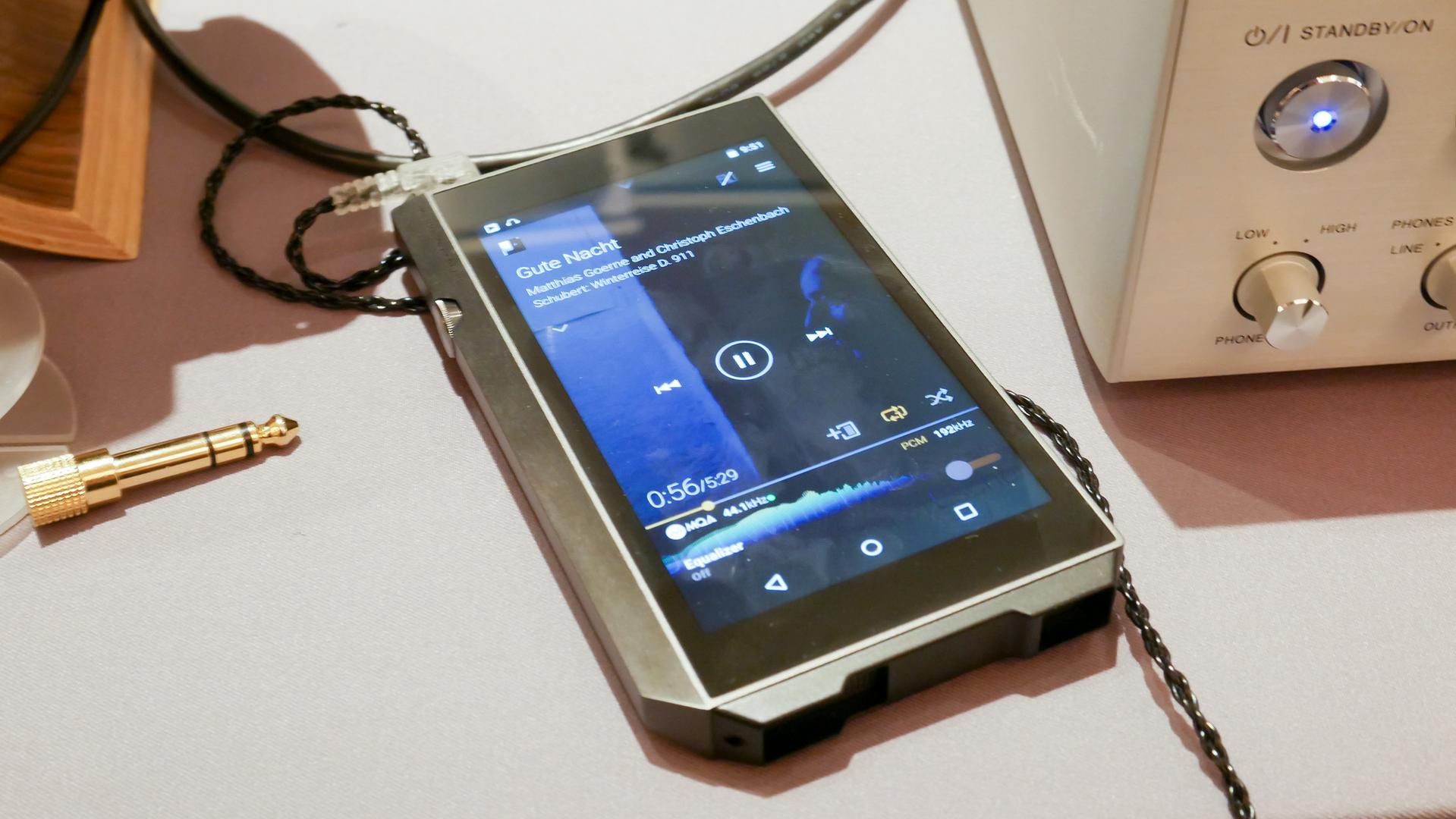 The Onkyo and Pioneer portable players have been shown before, but previously their MQA capabilities had been mentioned but not demonstrated. The Pioneer XDP-100R ($699) lacks a few features included in the Onkyo DP-X1 ($899). The Onkyo has two ESS Sabre ES9018K2M DACs so it can support true balanced output, while the Pioneer only has one DAC and does not offer a balanced connection. Both can play everything up to 384/24 to DSD256 and use the same Android operating system 5.1.1 although they have different looks due to their individual graphic  “skins.”

Best Sound (for the money)
Andrew Jones was demonstrating his amazing new ELAC Uni-Fi UB5 3-way bookshelf with a concentric midrange/tweeter and 5 ¼” aluminum woofer ($499/pr.), but Peachtree Audio had Jones’ ELAC B6 loudspeakers ($279/pr.) tethered to their new Nova 150 integrated amplifier ($1499)—and that system sounded both musical and involving.

Most Significant Product Introduction
Wilson Audio Alexx loudspeakers. If I had a million dollars…

Most Significant Trend
Exhibitors using reel-to-reel master tapes for their demonstrations. I saw and heard professional Revox machines, ATRs, and even a Stellavox at the show.

Most Coveted Product
Mytek Brooklyn, already back-ordered for months, will be hard to get for awhile since they are practically the only full-featured DAC with MQA currently available (apart from Meridian). Mytek is also working on an MQA-encoding A-to-D unit.