When I was a teenager growing up in Pittsburgh, PA, I often made a beeline to a store called National Record Mart. In those prehistoric days, the shrinkwrap on the LPs meant that a pre-purchase test run wasn’t really possible. There I would disburse some of my hard-earned dollars from my paper route for classical or jazz LPs, then race home to play them on the family Dual turntable, which hailed from Germany’s Black Forest region. I listened with rapt attention—and sometimes with disappointment to a recording that wasn’t up to snuff. So when digital appeared in the early 1980s, my impetuous teenage self welcomed the demise of the LP. The future had arrived, or so I thought. I distinctly remember hearing the local WQED classical radio station play its first digital CD, a recording of Beethoven’s crowd-pleaser “Wellington’s Victory,” and announcing to all and sundry that the disc was the cat’s meow. My father, however, took a different view. An inveterate fuddy-duddy, he disclosed to me years later that he had visited the downtown National Record Mart to scoop up a bunch of vinyl that was being sold at dumping prices. Unlike me, he was always unmoved by the claims of a revolution in recorded sound, raising his eyebrows questioningly when I touted the obvious virtues of the new digital era.

Flash-forward to today, and the verdict is rather obvious: My old man had it right all along. He’s using a VPI Scout these days, and I’ve become what you might call a vinyl recidivist. On recent trips to Paris and Berlin, for instance, I made sure to pick up some choice Decca LPs as well as some gorgeous Berlin Classics 180-gram reissues that were originally recorded in East Germany (Chad Kassem’s Acoustic Sounds also carries several of the Berlin Classics). It’s my sense that for the first time, audiophiles are really able to tap into the true potential of what engineers captured in the grooves decades ago. The quality of playback has advanced so rapidly—whether it’s cartridges, tonearms, or turntables—that it’s riveting to hear how far the boundaries of music reproduction can be pushed, as well as to discover what can be produced at less-than-Olympian price levels.

Enter the Spiral Groove SG1.2 turntable. In contrast with the cost standards of the six-figure turntables floating around out there—including a spanking-new Air Force Zero that’s pegged to come in at a cool $350,000—this new ’table from Allen Perkins is not priced in the stratosphere. It retails for $30,000 sans tonearm and for $36,000 with his Centroid ’arm (for those of you with an SG1.1, your ’table is fully upgradeable). Mind you, as the owner of a Continuum Caliburn, I’m hardly in a position to knock the battleship approach to turntable design, nor is that my aim. What I’m trying to say is that Perkins has deployed his fertile mind to provide as much value as possible in a relatively small package. In fact, I would say that his turntable is rather deceiving, as it packs a far greater sonic punch than you might expect from a casual look at it. What’s more, Perkins, an accomplished drummer and gifted designer of audio equipment, is a patient and mild-mannered soul who is less than inclined to make a fuss about the merits of his gear. It is only when you take a closer look that you begin to appreciate the effort and care that went into designing and producing the tonally pure Spiral Groove. 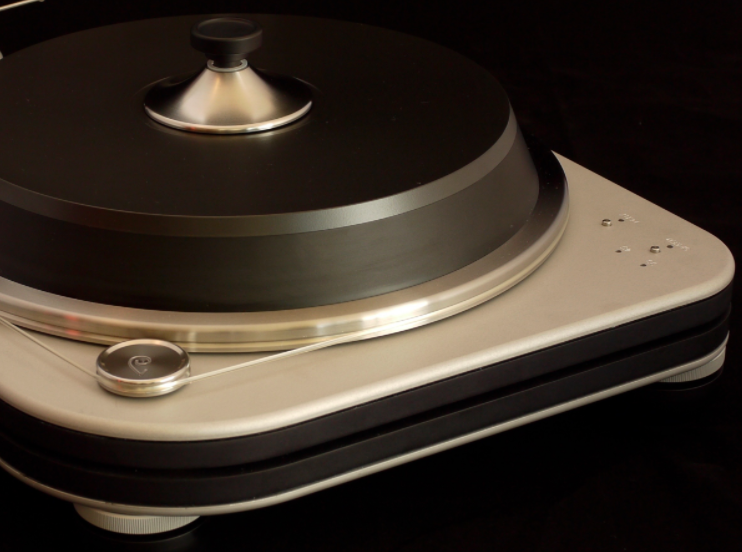 For starters, the belt-driven Spiral Groove SG1.2 is dense, clocking in at 80 pounds. The platter has an embedded and oversized outside stainless steel ring that is supposed to provide additional inertia by simulating the benefits of a heavier platter. The body of the turntable is made of four aluminum layers that are set in two independent, constrained-layer platforms. The various parts of the turntable are attached to the separate platform layers—one supplies a base for the motor and the other is for the platter bearing and ’arm mount. The feet of the ’table use proprietary Strange Attractor technology and are only attached to the bottom-most layer. All of these approaches are aimed at combatting pesky resonances that interfere with pristine playback. Perkins is very proud of his design, and rightly so. Other manufacturers, he intimates, have picked up on its merits. In many ways, the bearing is at the heart of the Spiral Groove SG1.2’s innovative design. It incorporates a steel ball and sapphire thrust plate that uses magnetic technology to reduce the weight on the sapphire to two pounds. Perkins offers—and I rush to assure you that this isn’t “fake news”—nothing less than a 20-year warranty on the bearing.

In addition, the Spiral Groove uses an outboard power supply to drive a high-torque, AC-synchronous motor that runs at either 33 1/3 or 45rpm. It’s possible to use different armboards and thus tonearms on the Spiral Groove but I employed Perkins’ nifty 10″ unipivot Centroid tonearm. Using something called “Balanced Force Design” to optimize its performance, Perkins claims “near-perfect” tracking for his ’arm. Like all unipivots, this ’arm needs to be handled with care as it can easily bounce around. Perkins mounted my Lyra Atlas on it. Overall, I never had any hiccups with performance, and this armboard/tonearm combo’s design looks to be bulletproof.

I don’t mean to natter on excessively about the technical prowess of the ’table, but given its unobstrusive aesthetics, it’s important to remember that there is a lot going on with the SG1.2’s mechanics. The aim of all the aforementioned design measures is to lower the noise floor as much as possible, and here Perkins has succeeded very well indeed. The first thing that struck me about the turntable was the superbly quiet backdrop to the music that it plays back. The Beaux Arts Trio recordings of Haydn are some of my favorite LPs on the Philips label. They are fairly simple works—particularly the early ones—but precise and beautiful. Their simplicity places a premium on quiet reproduction and the tonal beauty of the instruments. On Papa Haydn’s piano trio in E Flat, No. XV, the limpidity of Menahem Pressler’s piano came through superbly; his notes hovered in space and the Spiral Groove delivered a tactile sense of the pianist’s touch. These pieces almost sound as if they emanate from a jewelry box, and the Spiral Groove tracked the instruments with laser-like focus. These virtues also came to the fore on a DG recording of Dietrich Fischer-Dieskau and Gerald Moore playing Schubert’s songs from Goethe. The combination of Atlas cartridge and SG1.2 seemed to slice through the grooves to provide a sense of the physicality—the rich, resonant quality—of Fischer-Dieskau’s baritone voice.

The Spiral Groove also demonstrated excellent soundstaging on an album that Jerry Gladstein, the publisher of the late and lamented FI magazine, bequeathed to me a couple years ago when I visited him in New York. (It’s hard to know what’s more impressive—his choice LP collection or his wall of signed photos of great artists ranging from Ferruccio Busoni to Vladimir Horowitz.) The album is called The Delectable Elly Ameling, (incidentally, I’m not sure you could get away with a title like that in our current age) and features the Dutch soprano singing, among other works, Bach’s aria “Jauchzet Gott in allen Landen,” one of the great showpieces not just for voice but also trumpet; here, played exemplarily by the late French virtuoso Maurice André. The Spiral Groove effortlessly distinguished between voice, orchestra, and trumpet—allowing you to hear André’s horn back in the far right corner. Also particularly enjoyable was the SG1.2’s rhythmic solidity. The 16th notes popping out of André’s piccolo trumpet never wavered even as Ameling’s voice soared into the ether. No smearing, no bloat, no nothing, just the unvarnished recording. In this regard, I should note that Dan D’Agostino’s new solid-state phonostage also made a distinguished contribution. You really had the sense of hearing not just the music but also the venue in which it was performed. To me this greatly enhances the sense that you aren’t simply listening to a sterile reproduction but, rather, hearing the real thing.

Low noise also manifested itself on an old mono LP from Riverside called Jawbreakers. Yes, I remain a fan of monos; you might even call me a monomaniac. I love the image solidity and the amazing sense of presence that monos often deliver. On the song “Four” by Miles Davis it was a treat to listen to Harry Edison and Eddie “Lockjaw” Davis. The Spiral Groove once again displayed rock-solid rhythm and captured Edison’s insistent glissando runs with great accuracy, ditto the jaunty piano playing of Hugh Lawson, which was somewhat reminiscent of what was once known as Earl Hines’ “trumpet” style. But I think what really got me was the clarity of Clarence Johnston’s drums—the swish of the cymbals was so refined and enticing. 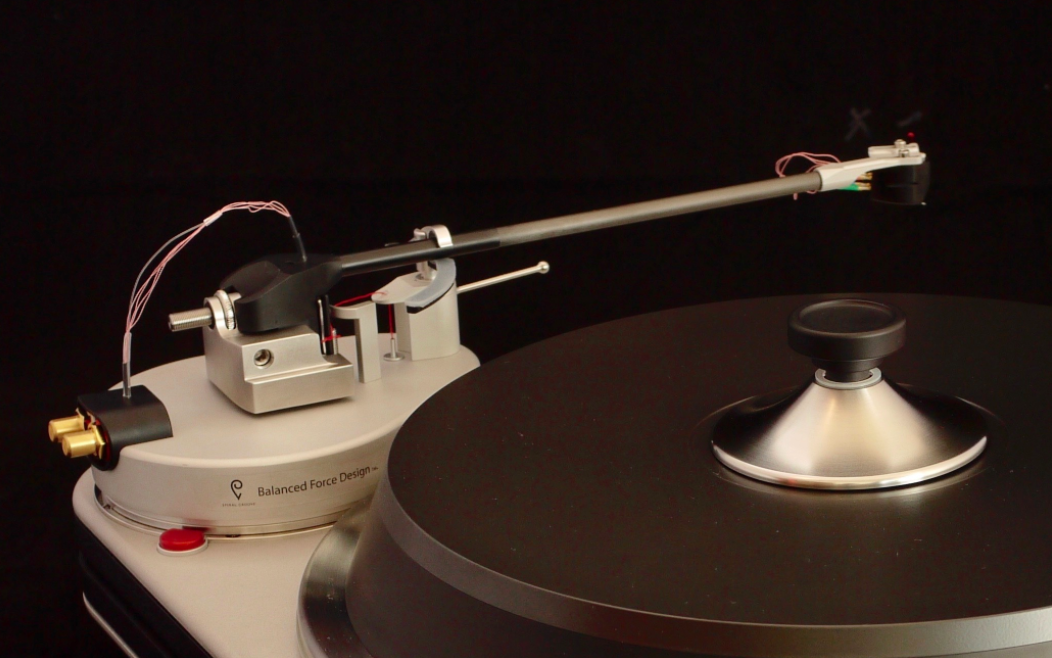 What about the nether regions? Here is where the rubber meets the road, or, to put it more precisely, the stylus hits the groove. For my money, where a lot of very good turntables start to falter is in the bass region. I don’t think the SG1.2 has the muscularity, the depth-charge explosiveness of the very biggest turntables like the Caliburn. But I don’t think that’s a fair comparison. I was most favorably impressed by the lower-octave alacrity and decisiveness that the Spiral Groove offered. Take the famous Epic album from 1960, One Foot in the Gutter, featuring Clark Terry, Curtis Fuller, Horace Parlan, and several other jazz greats. Listening to my splendid reissue by Classic records, I was frankly blown away by the fidelity of the bass on the “One Foot in the Gutter” track leading off the album. Peck Morrison’s notes practically flew out of the Wilson Audio WAMM loudspeakers (reviewed in this issue) with transfixing snap; you could also hear the shading of the note, almost the angle at which his fingers were plucking the strings. Something similar occurred on an Art Farmer album I recently procured called To Duke with Love that appeared on the Inner City label in 1975. Tonality was spot-on—Farmer’s flugelhorn sounded questioning and breathy. And on “In a Sentimental Mood,” Sam Jones’ bass emerged right at the outset with real force and propulsion—there’s a groaning quality to some of the notes early on. This is enhanced by the Spiral Groove setup’s ability to deliver an achingly lingering sense of a note’s decay.

One byproduct of the vinyl renaissance is that there’s an awful lot of turntables to choose from that reside in the high-performance but not nosebleed section of the hobby, ranging from Continuum’s Obsidian to many models from AMG to Acoustic Signature. What I really like about the Spiral Groove is that in this case good things come in small packages. Unless you have a really big room, there can be something slightly oppressive about installing big hunks of equipment in your listening space.

If you want to up the musical ante, you can go to something like the Swedish Analog Technologies tonearm made by Marc Gomez, but the tariff is also commensurately higher. In my view, the Spiral Groove SG1.2 is a formidable ’table that truly delivers the musical goods. It is even a—dare I say it?—groovy performer.