1. Petra Haden: Petra Goes to the Movies. Anti.
As she did on her radical reworking of The Who Sell Out, Haden orchestrates her overdubbed vocals to create panoramic renditions of familiar themes, in this case from the movies Goldfinger, Psycho, Bagdad Café, A Fistful of Dollars, Superman, The Falcon and the Snowman, and more.

2. Oranj Symphonette: Plays Mancini. Gramavision.
Many of my favorite soundtrack-related albums are those in which idiosyncratic, jazz-steeped musicians pay tribute to their favorite film composers. Initially known as the Oranj Mancinis, until lawyers intervened, this 90s Bay Area quartet squeezes out rowdy, quirky, and sincere treatments of “The Pink Panther Theme,” “Mr. Lucky,” “Charade,” “The Days of Wine and Roses,” “Moon River,” and other Enrico Nicola Mancini gems.

3. Sex Mob: Cinema, Circus & Spaghetti: Sex Mob Plays Fellini: The Music of Nino Rota. The Royal Potato Family.
Stalwarts of New York’s Downtown Scene, prone to revamping anything from Ellington to the Stones, the Dead, and Prince, Sex Mob takes on the maestro whose sonic fantasias enhanced the up-from-the-unconscious imagery of Amacord, La Dolce Vita, La Strada, Juliet of the Spirits, and more. They tap dance on a tightrope between raucous improvised jazz and harmonious reverence.

4. Orchestra Nostalgico: Plays the Film Music of Ennio Morricone, Nino Rota, Bernard Herrmann, and more! Orchestra Nostalgico.
There must be something in San Francisco Bay Area cocktails that triggers giddy, delirious, and worshipful approaches to movie scores. Evolving out of the Club Foot Orchestra, Orchestra Nostalgico couldn’t limit itself to the associates of Sergio Leone, Fellini, and Hitchcock on one of the best albums of 2014.

5. Various Artists: Amarcord Nino Rota. Hannibal.
Can we just crown producer Hal Willner the king of tribute projects? Since kicking it all off 35 years ago with this extravagant salute to the legendary Fellini collaborator, he has masterminded eclectic nods to Monk, Kurt Weill, Harold Arlen, Leonard Cohen, Tim Buckley, Harry Smith, and others. For this fan of edgy jazz, nothing, not even Willner’s Weird Nightmare: Meditations on Mingus or Stay Awake: Various Interpretations of Music from Vintage Disney Films, eclipses this assemblage’s interpretations by Jaki Byard, Carla Bley, Bill Frisell, Muhal Richard Abrams, Henry Threadgill, Steve Lacy, George Adams, and others.

6. Miles Davis: A Tribute to Jack Johnson. Columbia.
The Golden Age of film’s marriage to jazz seems to be behind us. We haven’t heard the likes of Duke Ellington’s score for Otto Preminger’s Anatomy of a Murder, Miles Davis’ for Louis Malle’s Ascenseur pour l’échafaud, Charles Mingus’ for John Cassavetes’ Shadows, or Krzysztof Komeda’s for Roman Polanski’s Knife in the Water for the better part of 50 years. Then there’s Jack Johnson, the Davis jazz-rock masterwork that bridged Bitches Brew, the funkier On the Corner, and the spacier, more Africanized Agharta and Pangaea. 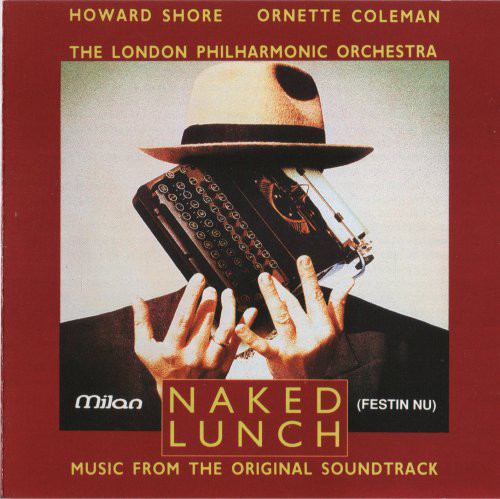 7. Howard Shore/Ornette Coleman/London Philharmonic Orchestra: Naked Lunch. Milan.
With his work on The Lord of the Rings and The Hobbit film trilogies, Shore moved into blockbuster territory. But it’s the music he wrote for director David Cronenberg (The Brood, The Fly, Dead Ringers) that makes Shore one of my favorite contemporary film composers. His collaboration with Ornette Coleman on the otherworldly score for Cronenberg’s adaptation of the William Burroughs classic can be appreciated on record as an extended suite for orchestra and jazz trio with North African and Middle Eastern tinges added to the mysterious dreamscape by sintir (Gnawan lute) and nai (Persian flute).

8. Philip Glass: The Hours. Nonesuch.
Stanley Kubrick’s incorporation of Ligeti’s music for the soundtrack of 2001: A Space Odyssey set a daunting standard for contemporary classical scores. If Ligeti’s music was about space, Philip Glass’ 14 compositions for 2002’s The Hours are about time, often providing connective tissue between scenes in different decades.

9. Various Artists: I’m Not There: Original Soundtrack. Columbia/Sony Music Soundtrax.
Soundtrack albums that are simply collections of songs are ubiquitous—and among my least favorite. But I’m Not There, the double CD of 34 Bob Dylan songs from the phantasmagoric Todd Haynes film, is something different. Calexico and the all-star Million Dollar Bashers serve as house bands; Sonic Youth, Cat Power, Sufjan Stevens, Yo La Tengo, Antony & the Johnsons, and Jeff Tweedy provide indie-rock cred and vigor; and the wide range of Dylan acts like a kaleidoscope to refract the many sides of Zimmy.

10. Various Artists: High Society. Capitol.
The songs from the movie musical-comedy remake of The Philadelphia Story are my biggest soundtrack guilty pleasure, except that all shame has been dispelled by the delight I’ve gotten since childhood hearing Frank Sinatra, Bing Crosby, Louis Armstrong, Grace Kelly, and Celeste Holm all sing these appealing albeit lightweight Cole Porter tunes.