Compiling a list of good soundtracks is a more complicated proposition than it might at first seem. This is because it involves some mediation among competing factors. For example, often a brilliant score accompanies a bad movie (Tiomkins’ for The Alamo), or a terrifically effective score isn’t all that interesting as music on its own (Jarre’s for Lawrence of Arabia). Then there are excellent films with excellent music, yet for whatever reason, the music and the film seem at odds (heretical as it is to say, Leonard Bernstein’s music for On the Waterfront is way too obtrusive for my tastes, yet it’s become a concert-hall staple, and deservedly so). And then there is the best of all possible worlds: good and great films with scores that work as score yet can be enjoyed on their own, such as any number of Korngold’s. In the selections that follow I’ve included examples from all four categories. The list is alphabetical except for the Austen entries.

1. Richard Rodney Bennett: Far from the Madding Crowd. MGM. A beautifully lyrical score that at once evokes the landscape and the inner lives of the people in Hardy’s novel.

2. Elmer Bernstein: To Kill a Mockingbird. Ava. Of course he’s written countless memorable scores, but I’m sure I speak for millions when I say that his music here is one of the most beloved and evocative soundtracks ever written: A few notes from that lone piano picking out the melody are sufficient to conjure up the whole world of childhood that this film so peerlessly realized.

3. Georges Delerue: Jules et Jim. Original Cinema Soundtrack. For his best film—and in my view his only great one—Truffaut found the perfect composer in Delerue, whose score celebrates the exuberance of French bohemian life before the First World War and then expresses the melancholy of its passing after the war.

4. Jerry Goldsmith: Patton. 20th Century Fox. Like Elmer Bernstein, Goldsmith has written so many outstanding scores that selecting one as his “best” almost constitutes an insult. So no “best” here, simply that I know of no finer instance where the overall effect of the film is so inseparable from the contribution of the music.

5. Erich Wolfgang Korngold: Kings Row. Chalfont Records. Korngold was already an important and recognized composer in Vienna before he came to Hollywood. It is hardly an original insight to observe that his film scores are really operas without words and are designed to express, support, or otherwise highlight every emotion in the melodramas that accompany the music (and yes, those last four words convey my meaning exactly). 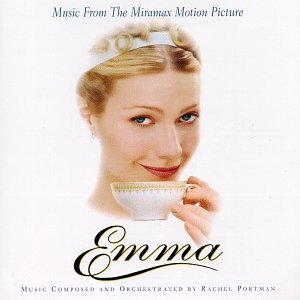 6. Rachel Portman: Emma. Hollywood. It would be hard to imagine music that more sweetly and delicately captures the world of Jane Austen than Portman’s for this traditional and faithful film adaptation.

7. Dario Marianelli: Pride and Prejudice. Decca. I put these two back to back because they represent entirely different, perhaps even antithetical ways of adapting Austen novels, both of which to my way of thinking are entirely valid. Released in 2005, this most recent Pride and Prejudice is more obviously an interpretation of the novel (without betraying it), and Marianelli’s score really drives the narrative.

8. Dimitri Tiomkin: The Guns of Navarone. Columbia. In my opinion, most new movie composers don’t know how to compose for action films any longer, perhaps because the music, like the action, is always too much, too loud, too obtrusive, too chaotic, too everything. Have a look at this exciting film for an object lesson in the art of action scoring—and it makes for good listening on its own, too.

9. Franz Waxman: Taras Bulba. United Artists. Yes, this 1962 costume epic is big, splashy, and trashy, and by any measure a pretty bad movie, yet it can also be a lot of fun if you’re in the right mood. Regardless, it drew from Waxman a brilliant response, by turns lyrical and raucous.

10. Jerome Moross: The Big Country. United Artists. Big budget, star-driven Westerns were a staple of Hollywood for ten years beginning in the late 50s, and they all came with lavish, driving, powerful orchestral scores that are almost participants in the action (e.g., The Magnificent Seven, Gunfight at the OK Corral). This one, composed by a student of Copland’s (and it shows), is one of the best, with a thrilling overture that really does evoke both the bigness and energy of the American West.