Movies are a form of escapism. As such, they invite you to visit and experience a different world. Considering that a film’s score plays an essential role in conjuring a movie’s mise en scène, I noticed the common thread connecting my ten picks is these soundtracks each conjure an indelible musical landscape to transport you to a particular time and place whether it’s a film evoking a different geographical, metaphysical, or spiritual locale. Is it the journey or the destination that matters more? Getting there is half the fun, even if it’s not via the usual routes. Call it a voyage of discovery.

1. Various Artists: I’m Not There. Columbia. Take a trip into the mind of Bob Dylan…but not via the usual channels. Just as the film features the role of Dylan played by a diverse cast of a half-dozen different actors (including Cate Blanchett), this album—which, oddly enough, doesn’t actually contain the actual movie soundtrack—is entirely comprised of his songs performed (barring one exception, the title track) by a wildly diverse host of artists, from Sonic Youth and Sufjan Stevens to Richie Havens, Yo La Tengo, and Cat Power. This double-disc set features renditions both faithful and reimagined, and happily, there’s scarcely a dud in the bunch. Not to be missed are Calexico’s many contributions (at times also as backing band for others, such as on “Just Like a Woman” from Charlotte Gainsbourg and “Señor” from Willie Nelson).

2. Talking Heads: Stop Making Sense. Warner Bros. Director Jonathan Demme made what is arguably the quintessential concert film with Stop Making Sense. Well, it might not exactly be as if you were there, but this soundtrack effectively captures the live show’s infectious energy. Brimming over with the Heads’ multi-cultural, polyrhythmic influences melded with funk and rock ’n’ roll, the controlled chaos of this well-recorded dynamic album is simply one hell of a raucous good time.

3. Elliot Goldenthal, others: Frida. Venture into the hyper-colorful, oft-surreal world of Mexican artist Frida Kahlo’s agony and ecstasy on this Grammy-winning original score. Prominently featured is Mexican-American powerhouse alto/contralto Lila Downs, who sings her heart out across her remarkable vocal range, evoking the artist’s fiery spirit both tough and feminine. The album is an enchanting study of contrasts: vocals by turns raw, earthy, rich as molé; then whispery, soft as a feather. The late Chavela Vargas, who reportedly had an affair with Kahlo, sings the ragged, mournful “La Llorona.” Whether plucked delicately or strummed with gusto, assorted acoustic string instruments—the vihuela (small Mexican guitar), standard classical guitar, and guitarrón (Mexican six-string acoustic bass)—resonate throughout, peppered with gorgeous glass harmonica.

4. Gilberto Gil: Me You Them (As Canções de Eu Tu Eles). Warner. A seminal Brazilian musician and two-time Grammy winner in World Music who, along with Caetano Veloso (also a political activist), came to define the MPB (Música Popular Brasileira) and 1960s Tropicália genres, Gilberto Gil hardly needs an introduction. Here he not only retools his own compositions, he also delivers fresh takes on the influential Luiz Gonzaga’s lively accordion-laced Northeastern Brazilian folkloric-style tunes (baião, xote, and forró) that became popular in the 40s and 50s.

5. Peter Gabriel: Passion: Music for the Last Temptation of Christ. Geffen. Though Peter Gabriel is no stranger to world music influences, this score for the Scorsese film brews the ultimate melting pot that transcends not only cultures and countries, but also time. Melodic and instrumental inspiration ranges from ancient music captured in field recordings from Turkey, Senegal, and Egypt. Gabriel and the superb world musicians have woven a rare tapestry that’s truly transcendent and utterly sublime.

6. Various Artists: The Darjeeling Limited. ABKCO. In this 2007 film, three estranged brothers travel to India in search of spiritual enlightenment (sort of), and indie auteur Wes Anderson has curated a mixed bag of tricks that defies borders (classical, Indian, rock) and that, oddly enough, somehow felt just right for the journey’s unforgettable turns. The Kinks’ “This Time Tomorrow” and “Strangers” resonate nicely over a couple of poignant slo-mo scenes, as do the sweetness of Debussy’s “Clair de lune” and a Chicago Symphony recording of Beethoven’s Symphony No. 7 elsewhere. Homage is also paid to acclaimed filmmakers Satyajit Ray and Merchant Ivory, whose work clearly inspired Anderson—several delightful and quirky tracks are borrowed from some of their classic Indian film scores.

7. Various Artists: Death Proof. Maverick. Welcome to Austin, Texas. It’s not so much about a road trip as it is a harrowing and horrific half of Quentin Tarantino’s Grindhouse double feature. The Pulp Fiction and Reservoir Dogs soundtracks (and films) have justifiably received more acclaim, but I went with this one’s muscle-car racing (T. Rex’s “Jeepster,” Jack Nitzsche’s “The Last Race”) and roadhouse nods (Pacific Gas & Electric’s “Staggolee,” the Coasters’ “Down in Mexico”), alongside an Ennio Morricone track, a couple slow soulful slow tunes, and “Chick Habit,” a Serge Gainsbourg-penned rhyming ditty performed here by April March. In typical Tarantino style, there are the requisite fun dialogue outtakes between tracks. A wild ride—and good driving music. 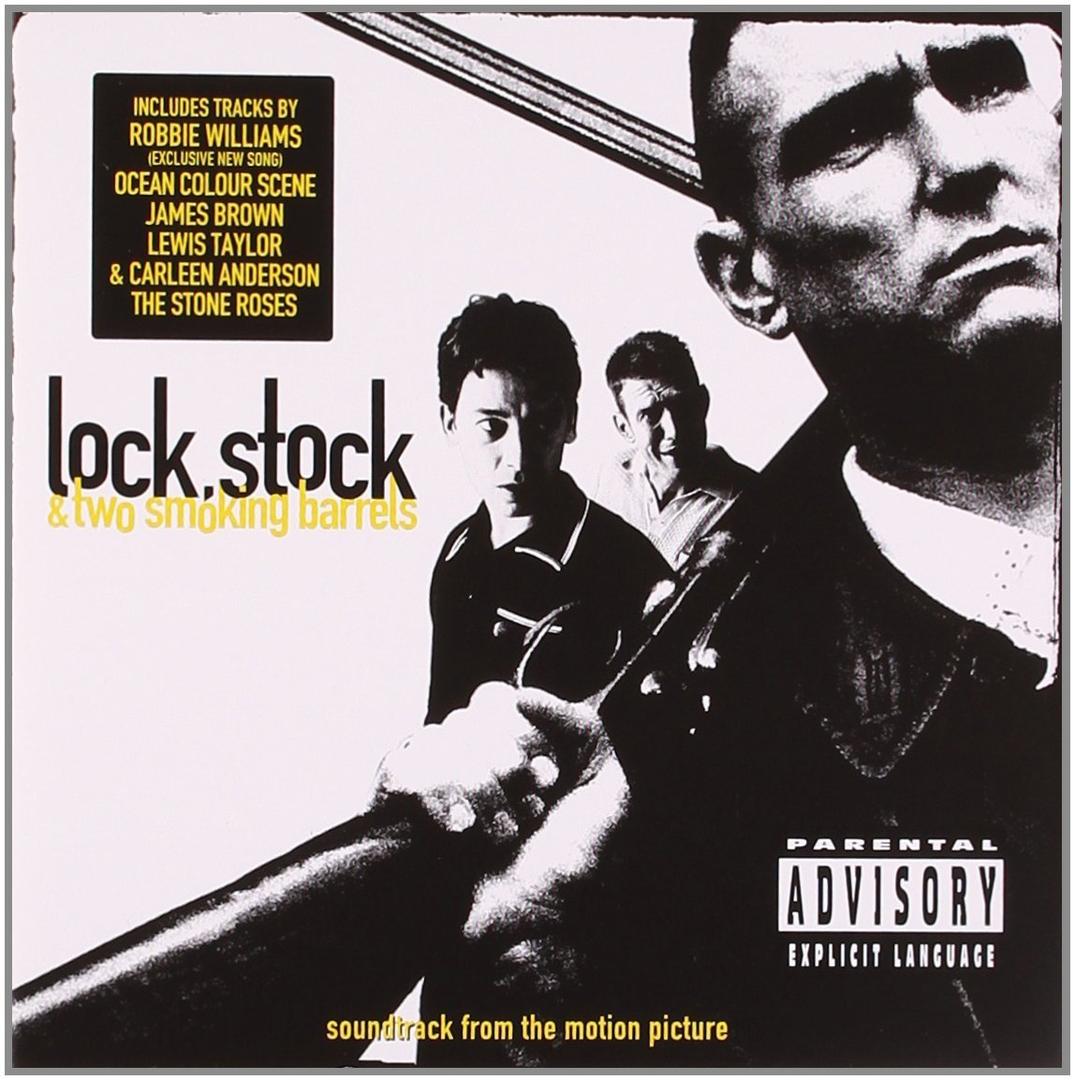 8. Various Artists: Lock, Stock, and Two Smoking Barrels. Island. Another entry on the violence-in-films front, Guy Richie’s breakout crime comedy caper takes us to London’s gritty East End, where an assorted (and sordid) hierarchy of ridiculously incompetent thugs bumble their way through a half-baked heist to repay a dubious gambling debt. Expect the unexpected with plenty of funk (James Brown, et al.), Dusty Springfield’s “Spooky,” and the Stooges’ “I Wanna Be Your Dog” alongside a little reggae and up-tempo drums and bass. The Stone Roses’ English-style funk “Fool’s Gold”—the song’s name fits a bit of narrative irony—is heard at the end of the film. À la Tarantino, this one also features dialogue snippets between cuts.

9. Various Artists: Marie Antoinette. Verve. This frothy little confection of a film that’s more about visual style than substance, directed—and creatively re-envisioned—by Sofia Coppola sports a double-disc soundtrack that’s largely deliberately anachronistic. This multifarious array of mostly new wave and post-punk music offsets the Regency epoch’s epic excesses and lavish production design with a wild and wonderful tapestry of tunes. The range of tracks on here is as far-reaching as Antoinette’s pompadour wig is tall. Break out the bubbly and macarons for the first disc’s colorful pop and post-punk gems from New Order, the Cure, Bow Wow Wow, the Strokes, et al. Maybe sip some cognac as you take in the mellower second disc that serves up a smorgasbord of atmospheric treats, with Aphex Twin, Air (who scored Sofia’s The Virgin Suicides), and Squarepusher alongside the few classical cuts. Apparently there was a limited-edition vinyl release, but I’m stuck with the CDs. I can’t say I adored the film, but this collection is a sugar rush, a kick, and a guilty pleasure. Fun stuff.

10. Gabriel Yared, others: Talented Mr. Ripley. Sony Classical. As much of the film is set in Italy, there are a few Italian tracks, such as “Guaglione” and “Tu Vuò Fà l’Americano” (where Matt Damon and Jude Law pitch in on vocals backed by The Guy Barker International Quintet), alongside some Bach, Beethoven, and Tchaikovsky. A shared love of jazz music brings the film’s main characters closer, so several classics from Charlie Parker, Miles Davis, Chet Baker, and others are featured. Yes, Damon even sings on a couple of tracks (a spare rendition of “My Funny Valentine” for one) but that’s not why I picked this. There grows a slow-burning sense of Ripley’s downward-spiraling path—from freewheeling partying to sinister obsession, deception, and murder—that’s subtly underscored here.